The picturesque and how to avoid it

Popping in to my local library the other day I picked up a book I'd thought of buying but new I'd regret doing so - Landscape Photographer of the Year: Collection 4. It's not that I consider myself a landscape photographer, just that I like looking at photographs. As expected there were numerous wide-angle shots in portrait format with 'interesting' foregrounds. Plenty of 'moody' skies. And quite a few alternative views of particular landmarks.

In amongst the expected picturesque shots were some really inspiring pictures. Most of these seemed to take a liberal interpretation of the term 'landscape'! The ones I liked most I'd class closer to being portraits than landscapes. They certainly seem to me to be primarily about people in an environment rather than an environment with people in. Of the landscapes without people the ones I think are most successful are the ones that don't rely on technique but use technique to make the shots possible. Stitched panoramas being some I didn't expect to like, but when done for a reason they work well. When done for the sake of doing them, like most techniques, they are annoying.

The images I like least are the ones that are trite, relying on dramatic light for example, and those dreaded wide-angle shots! When people think of making good landscape pictures there is all too often a tendency to take the easy option of shooting either at sunrise or sunset, or on days when the sky is either blue and filled with fluffy clouds or dark and menacing. It's an easy option and neglects the fact that most of the time in this country the sky is a uniform pale grey.

Despite my dislike of picturesque landscapes I have succumbed to the temptation of a neutral graduated filter. Even an overcast sky can make exposure difficult, particularly at the coast where there is a lot of sky. I tried it out for the first time this afternoon, when another sunset was threatening. This time the sunset almost happened. Not too dramatically though and the shots I took of it were pretty dismal. I really should take the tripod and get more depth of field in, but I'm lazy and impatient at the same time. I keep seeing different ways to frame shots and need to try them all to decide which works best.  Maybe it's easier to be disciplined with a tripod when there are some features to frame and the options fewer rather than just the horizon and sand?

Anyway... The filter made a difference. When the sky is correctly exposed the land lightens up revealing more detail than would be the case without the filter. When shooting into the light the chances of blowing the highlights in the sky are reduced. So it was money well spent. In fact I think I'll invest in a stronger filter too. Not that I want to get into the overuse of 'grads'. They can be as obvious and tedious as the low level wide angle shots of rocks at the water's edge. Luckily there are no rocks on my part of the coast!

One way I try to avoid the picturesque is to keep as much obvious 'interest' out of my shots as possible. This is reasonably easy at the beach. In am ore complex environment other strategies need to be adopted.

The photo below is a shot of sand, water and light in a very limited and muted palette - almost two tones each of blue-grey and buff. There is little in focus, a thin band of sand about a third of the way up in fact, and the high ISO gives it a soft overall feel. 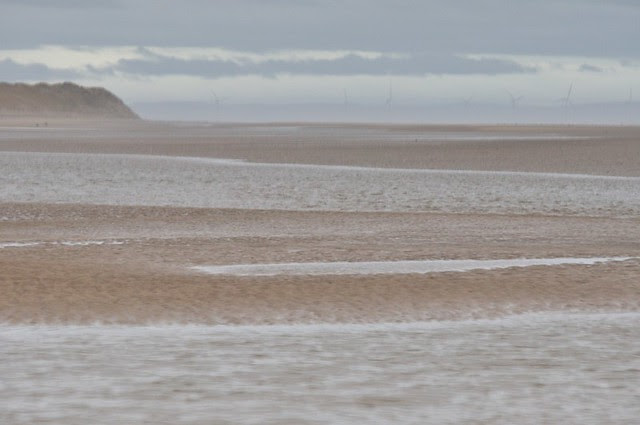 What makes the picture work (for me) are the gently zig-zagging bands of colour leading the eye into the picture space. The rising dune to the right alleviates monotony (my sole concession to 'interest') and stops the eye, turning it along the horizon where the wind turbines come in and out of view through the misty haze, just rising above the darker band that is the far side of the Mersey estuary. The grey cloud at the top of the picture completes the frame and mirrors the colour of the band of water at the bottom. It may be better viewed on black.

All too often I manage to take shots that are 'nearly' pictures. Or is that all the time? If truth be told I'm hardly ever 99% happy with any of my photos. There's always some flaw, however minor, that is all I see whenever I look at them.

At first glance I was happy with the shot below. The good points are the composition, the light (particularly the long shadows), the muted colour scheme, the guy's pose and the dog being on the point of leaping. But... 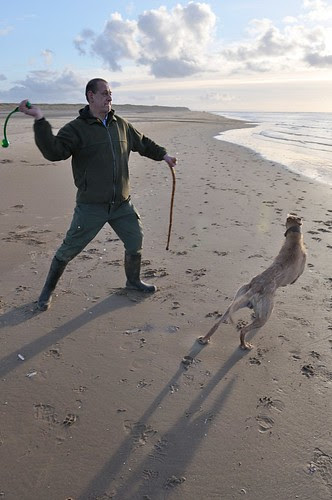 The niggles are a slightly too slow shutter speed giving motion blur where it's not wanted. This isn't apparent at the size the image is shown here, but when viewed larger it is. I can live with the blur in the throwing stick, but the dog is blurred a little too much. The throwing stick is also too close to the edge of the frame. It's only a midge's, but it's enough to niggle.

The most annoying flaw is the dog's pose. It's great that the front paws are off the ground giving a sense of movement and anticipation as it watches the ball, but they should be visible rather than implied, and if it's head was in profile, even if just the tip of its nose turned into view to the left, the picture would be far better. More definition of the dog's tail would have made it complete. To top off the annoyances is a hint of unsightly green flare. Flare can be good, but in this case it isn't.

So it's another 'nearly' shot.

I've been buying a few photo books lately. Thanks to Eric Weight mentioning Sam Abell I ordered his 'Life of a Photograph'. One very interesting aspect of the presentation in this book, which I found slightly disappointing in the amount of text given how well Abell talks about photography, is the presentation of similar pictures of the same subject.

Most of us try a few variations of composition, I am sure. Most times one picture stands out as being the 'best'. Every now and then there may be two that are impossible to choose between. Sometimes there might be one stand-out shot and others that work to place it in context. It was reassuring to see this in action in a renowned photographer's work.

Another book which has more text and is part autobiography and part retrospective is "William Albert Allard: Five Decades". I'm not yet right the way through this, but it's a good read, filled with superb photographs, and again chimes with my experience of photography in many places.

Neither of these photographers is easy to pigeon-hole, their work is varied yet consistent and individual in style. If that makes sense. They are just out to take (or make) great  photos - which they do with a greater regularity than most of us!

Yesterday I had intended to have a wander round town, but ended up in a park I hadn't visited for some thirty years. I had a camera with me then and must dig out the negatives. It proved to be a worthwhile couple of hours in bright sunshine. A theme of shadows and fences emerged. I'm not sure why. An example of each here, and more on Flickr. 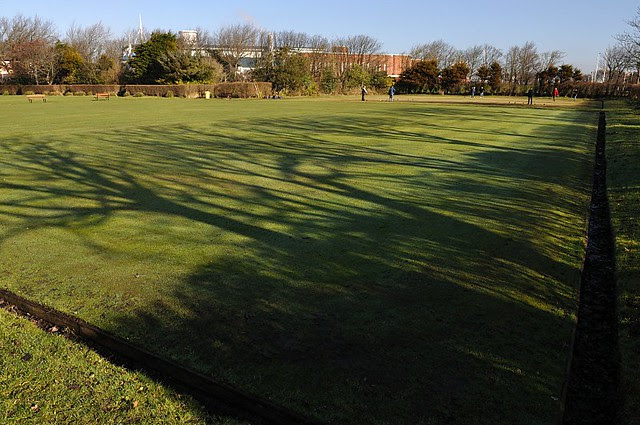 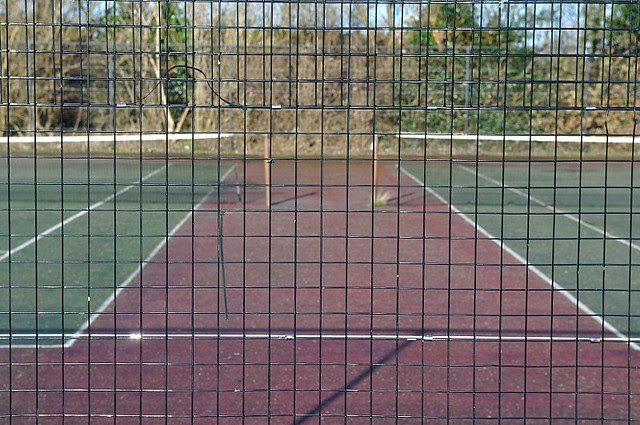 Some time ago I found something on the internet about making daylight shots look like they were taken at dusk, or later. I've been wanting to try it out for some time, and today I did.

Basically you set the white balance to give a blue cast, underexpose in manual, and use the flash with a warming gel to highlight the main subject.

I need to practice some more, but the photo below gives a rough idea of what is achievable. It was taken at quarter to three on a sunny afternoon. A handy trick, if a touch journalistic in style. 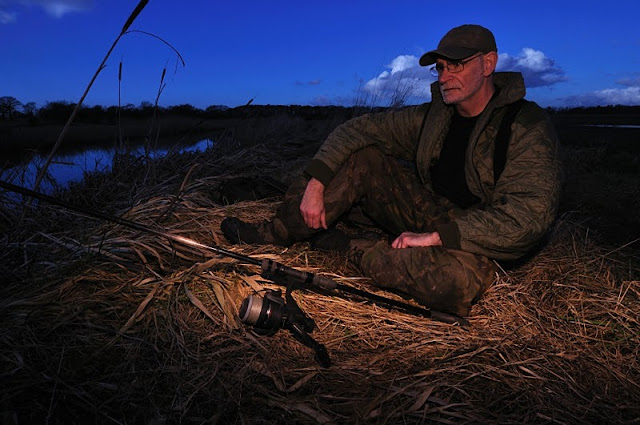 On the subject of  journalistic style, there is one technique that is used regualrly in mainstream fishing publications. The ultrawide close-up with fill flash. It's used so often as to have become the norm. And I hate it. I hate it so much that when I try it I can't go to the extremes that the journo togs do. When used in moderation it, too, can be effective. The trouble is that in the mainstream mags it is used as a matter of course. A lazy way to give a photo an impressive gloss. 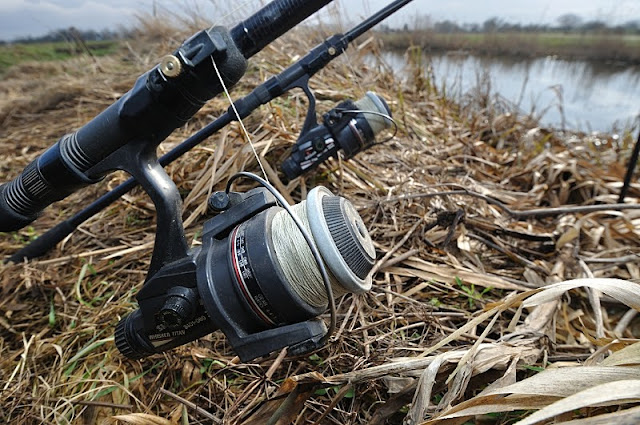 I used to be indecisive

Looking again at the posts in sand photographs I find myself swinging back to preferring the one without the figures. As an image I think it's better constructed. But then the one with the figures makes a better picture, having an element of narrative.

Likewise the original and the crop below. The original, with the parked vans, gives a sense of space and place, while the crop is more graphic. The original is a picture, the crop an image. Which I think is 'better' depends on what I think their purpose is at any given moment! 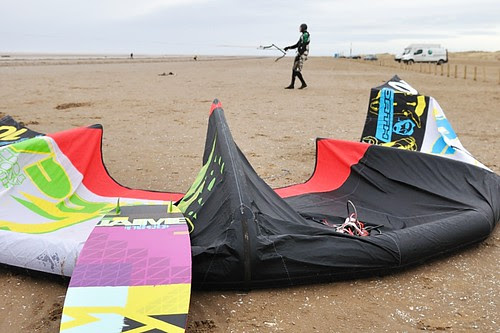 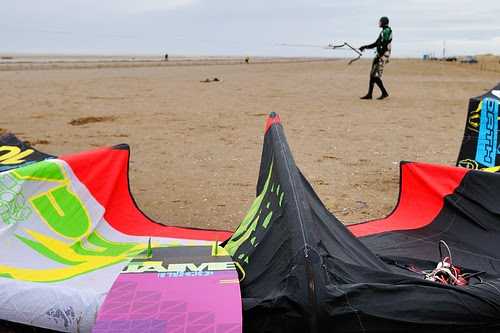 Contemplating those two shots of posts in the sand I now think the one without the figures works better. Jeeez! But that's what the distance of time does to how we evaluate images we make. I dug out some contact sheets just over a year ago that I guess I last looked at in 1982 or thereabouts. Among the frames I had never printed at the time was one that I now like so much it's my only photo I have on the wall. You can't judge images immediately after creation.

That said here's one with a bird in it that I like from today, plus a bird photo. 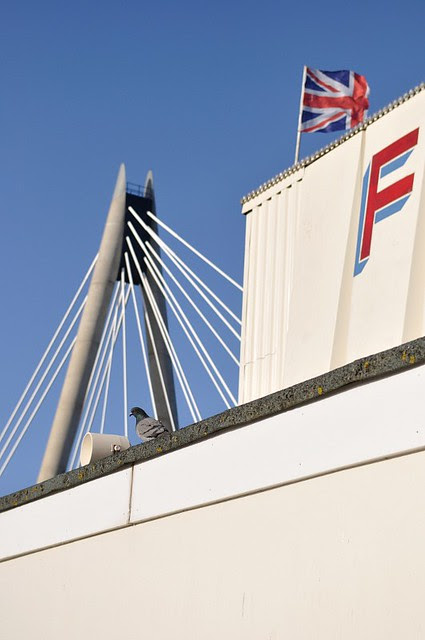 I spent half an hour, maybe a little more, in a hide photographing feeding pintail this afternoon. I rattled off well over 100 shots and ended up with three that were sharp and pleasing in lighting and pose. It was fun, again, but I prefer ending up with images that I can look at time and again - like the one on my wall. But birds are an easy subject, in as much as you have a good idea where they will be and what they are going to do. While photos of 'stuff' needs hunting down, and more difficult still, seeing. Birds are easy to see, even their behaviour is fairly predictable, but images that are pure abstraction of the everyday world don't reveal themselves so readily.

I guess the only way to remove the temptation of bird photography is to get rid of the long lens. Do I want to? I found some approachable tufted ducks today... 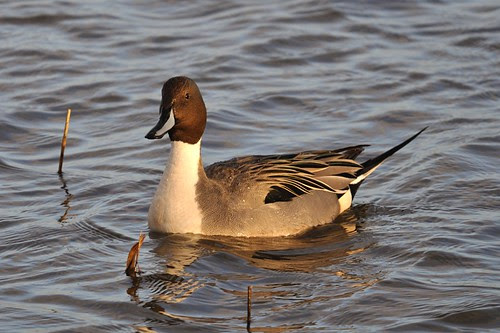