Yesterday I'd had a roam in the rain that assaulted Lancashire. There was minor flooding in the village, which was nothing compared to that which occurred not too far away. That still meant that some poor souls had pumps running to keep the water from entering their properties. The big problem here is that the water can't get away. Ditches are higher than I've ever seen them, and when brimful all water can do is back up. 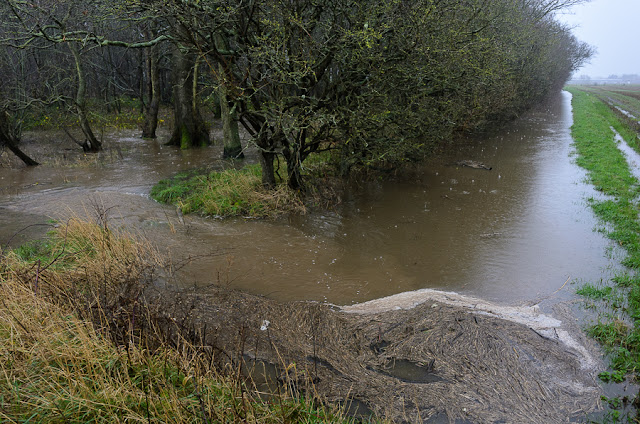 My intention today had been to head for WWT's Martin Mere reserve for an hour or two but on my way there was even more water about than last week. It looked even more like the original Martin Mere was returning. I stopped off and made a few snaps from the roadside. Lacking in time and waterproof footwear I couldn't get any closer to make a better stab at invoking the spirit of the old mere. I think I know how to achieve what I have in mind now. But unless I can get my arse into gear to try out my ideas while the water is still lying I'll not get to find out. 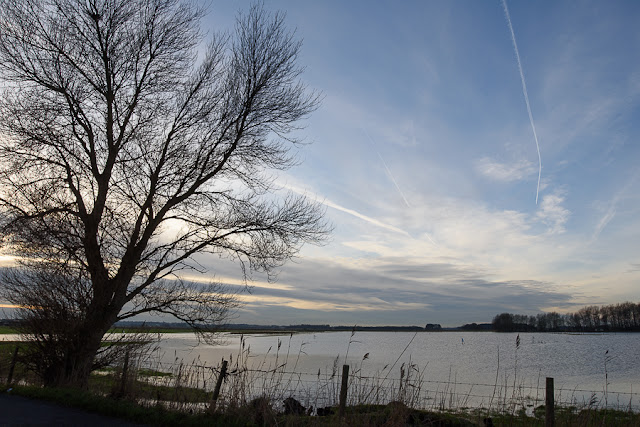 Pressing on I got to the reserve as the light was starting to fail. Unlike just about everyone else who goes to nature reserves my interest lies less in the wildlife than the place and the people. I have an in-built dislike of looking at birds and animal through glass, be that a camera lens, a pair of binoculars or, worst of all, a hide window. It was therefore no surprise when I spotted a kingfisher close to a hide with my naked eye that the hide-dwellers hadn't seen because they were gazing at herds of wildfowl in the distance. 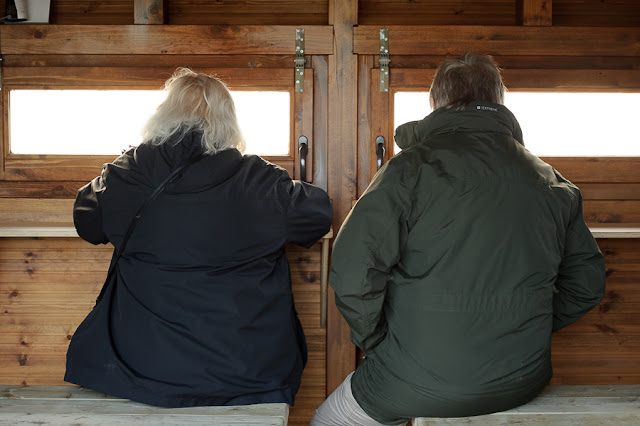 I'd just missed feeding time for the hordes of squabbling swans, geese and shellduck in front of one of the hides. It might as well be a circus as a nature reserve. There were people set up with the obligatory 'big white lens' set ups rattling off fast bursts of exposures attempting, no doubt, to get super-sharp, ultra-detailed photos of the birds. I had a 'long' lens with me (a 70-200) and I didn't bother setting up for rapid fire. In fact I dropped the shutter speed right down and tried a different approach when I noticed that shellduck would occasionally fly towards the hide. 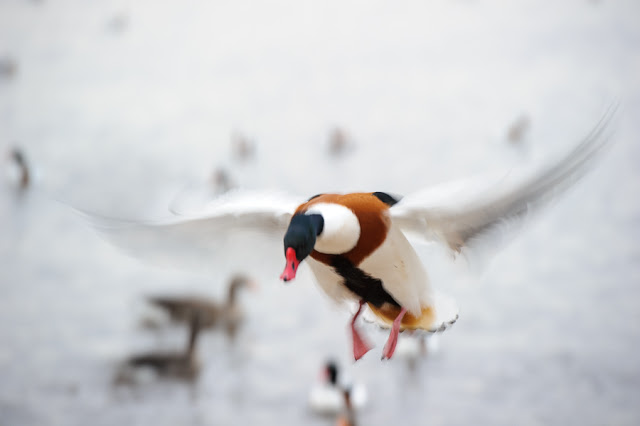 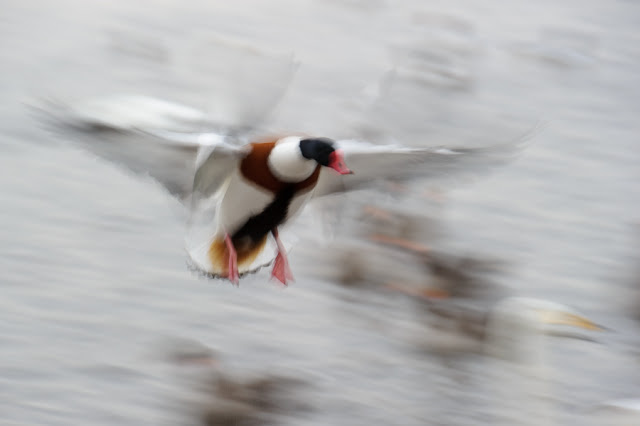 Not an original idea. But a more interesting exercise for me than aiming for detailed record shots. I like the element of chance this kind of technique brings. You can never be sure what you're going to get. There's a lot more misses than hits, but that's no problem with digital. Maybe there's something to explore in this. But probably not much! 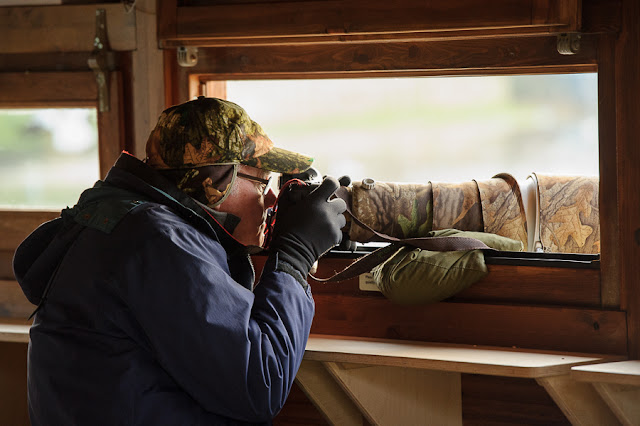 Return of the Mere 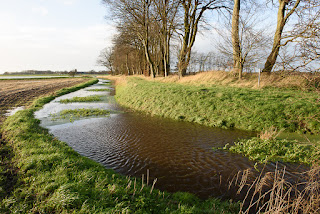 Rumours are flying around that changes to the pumping regime will see pumps closed that drain the low lying land of west Lancashire. Whether thee rumours are what is actually going to happen remains to be seen. One thing is for sure, it wouldn't take much for the mere to return. Recent prolonged rain in the area didn't result in catastrophic floods as it did further north, but land that was once permanently under water before the drains were dug is looking rather wet at the moment. One drain system being higher than I've seen it. On one side of the road the drain was almost brimful while the ditch on the other side was at a normal level. Something odd is going on.

This drain was so high that downstream it had over-topped the bank and the field, marshy at the best of times, was now a small lake giving an indication of what would occur were the pumps to be switched off for good. Not being aware of the situation before setting out I wasn't prepared to take 'landscape' photographs, so  did my usual hand-held thing. The weather is set to turn wet again, so maybe I'll be able to have another try with more suitable gear?

These are some of my attempts to suggest a landscape threatened by water. The flippy screen was useful for keeping me from having to kneel down and get soaking knees! 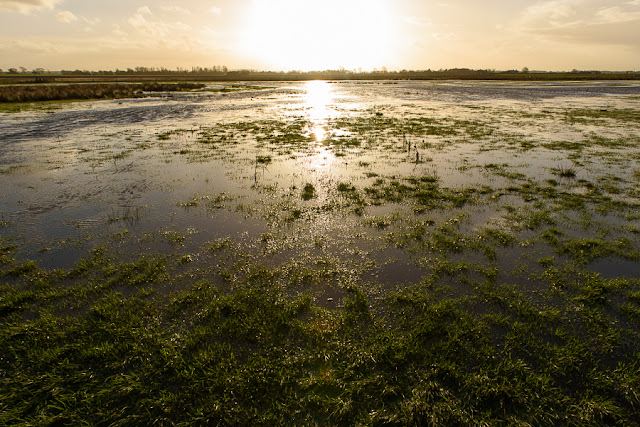 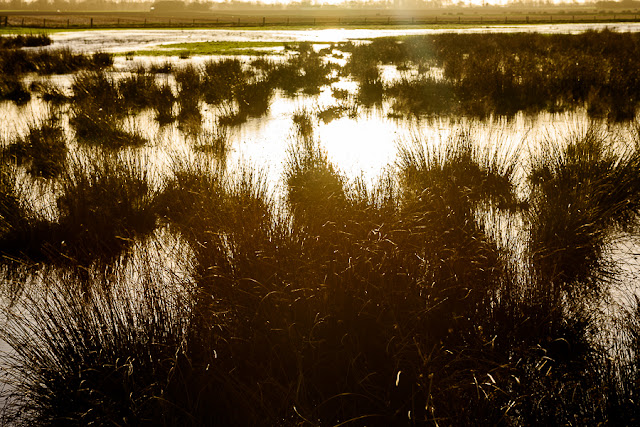 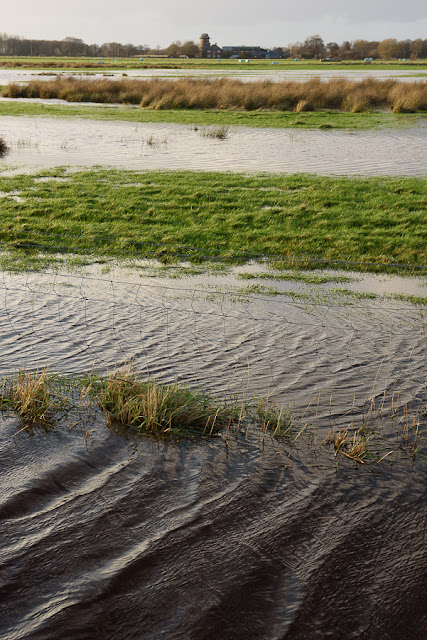 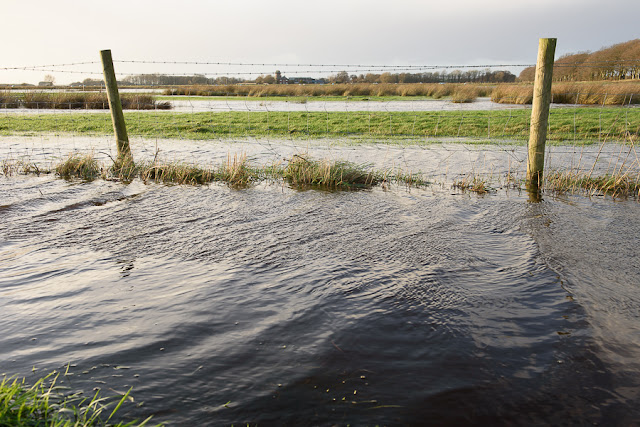 Wet places certainly attract me, but I still can't get a real handle on how to photograph them. As good an excuse as there is to keep trying, I suppose! I'm sure that if I could devote a few weeks to doing nothing but photograph such places it would come together much more rapidly. But that's not likely to happen.