Increasingly I find that unless I have a project to work on I don't take many photographs these days. Which is why I really need to get to grips with another subject or I'll end up just photographing the poultry world! Of course doing that can lead to developing new ideas or approaches. With the poultry auctions under way again after the avian flu restrictions it was off to the mart yesterday without any real idea of what to do differently as I've covered all the 'action'. One approach might have been to take portraits, posed or candid. I did snatch a few in the latter mode - there are plenty of 'characters' to be seen, but they rarely seem to be much more than record shots in the way some people photograph birds. There wasn't much story telling to them. More like a camera club exercise than proper photography. 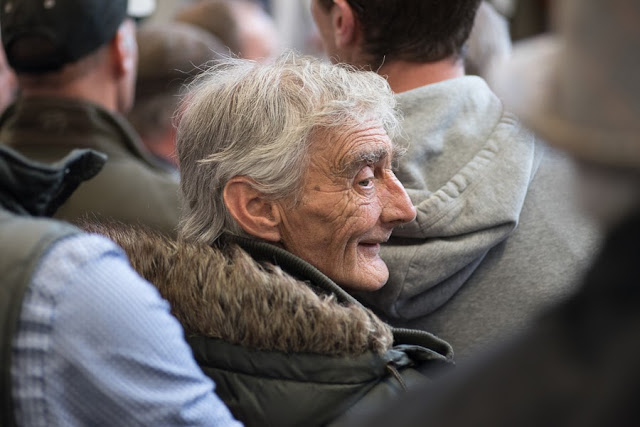 There's always the comedy angle, but that feels a bit like a cop-out too. 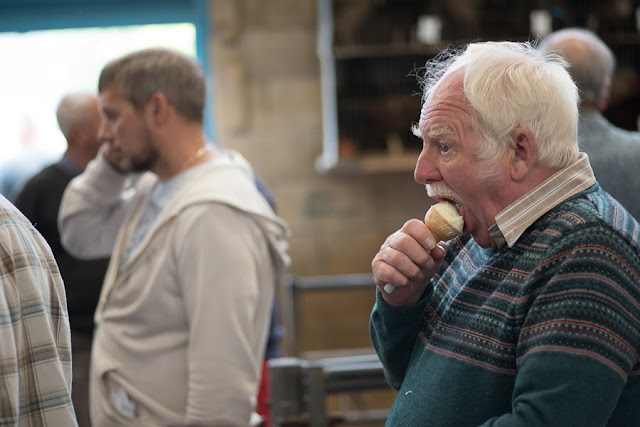 So which way to go? After floundering for a while, as I tend to, I began trying to get an impression of how people are crowded together. This isn't as easy a concept to get across as it might seem. A wide view shows what it looks like, but not what it feels like. The old camera over the head random shot approach. Although I did use the flippy screen a couple of times. 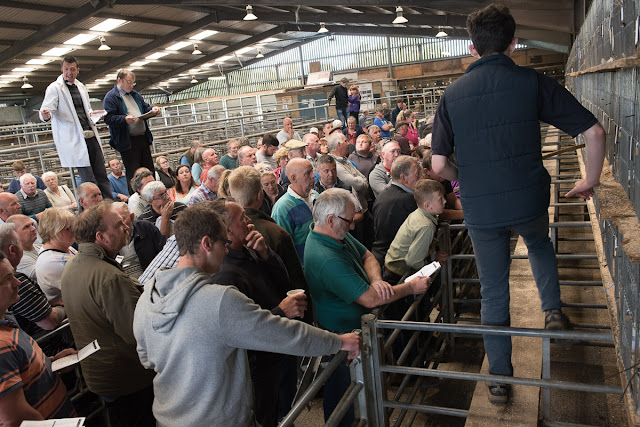 One alternative is to use a wide angle lens in close. So I did that with both my proper camera and, thinking that it being small and silent would be less intrusive, with the toy camera. As it turned out being small and silent made no difference. If people are engrossed in something they don't notice how big and noisy a camera is. What the toy camera was was annoying to use! 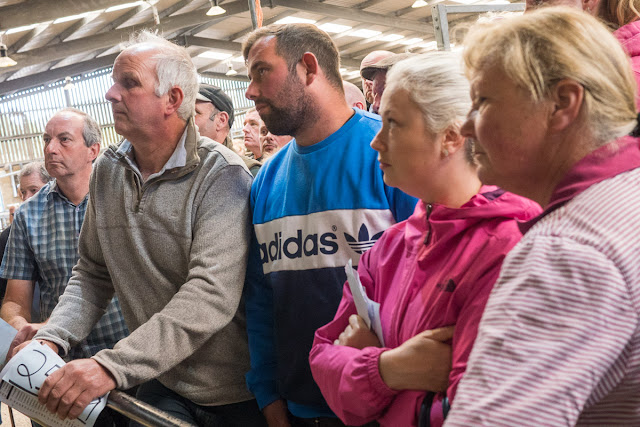 The other option is to use a longer lens from a moderate distance to give out of focus, but recognisable, elements to convey a sense of depth. 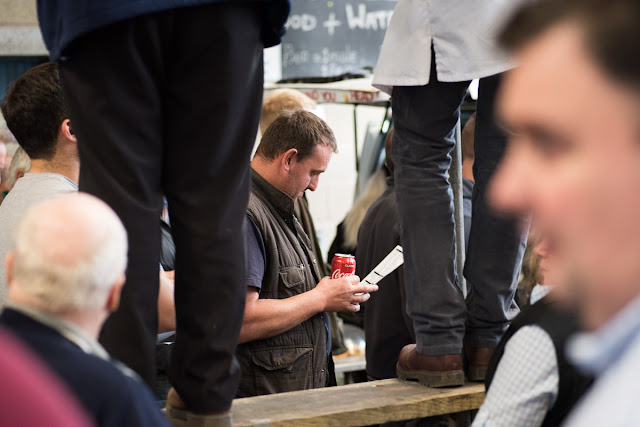 Doing this got me thinking again about framing and breaking camera club rules. The idea of partially seen elements intruding into the frame is something I've been doing recently and did some more yesterday. It's almost impossible to plan, and relies on either lucky or good timing to get right. 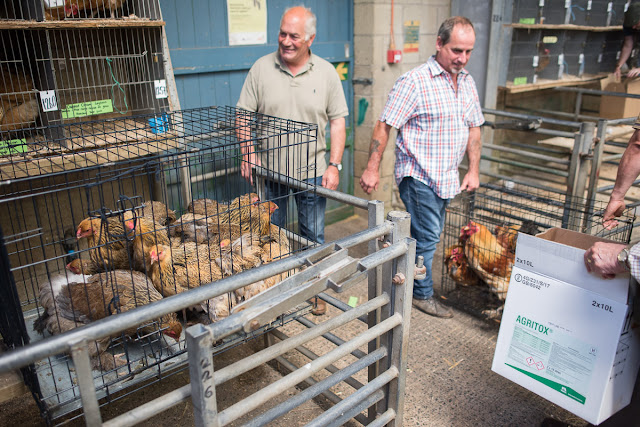 Something else I continue to play around with in framing pictures is making complex images and looking for elements in them rather than making 'good' compositions. I have a better understanding of what I'm looking for. That's not perfect pictures, it's interesting ones where even seemingly boring elements make sense. In the case below, which illustrates what it's like in the sale ring, it's the boy squeezing through the gap between wall and rails. 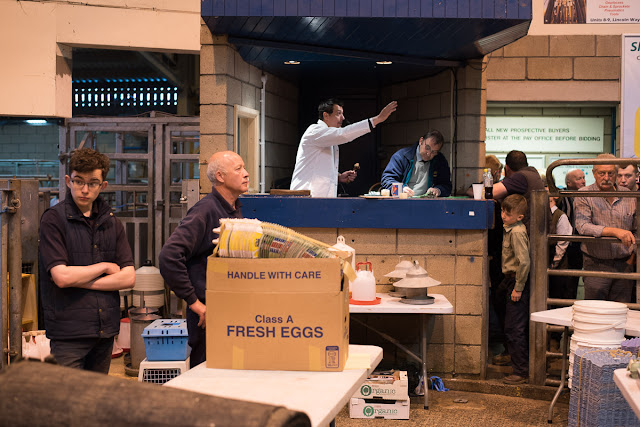 Making pictures which either fill the frame with a rhythmical flow or spread elements across the frame relying on 'gesture' are still in my sights. Taking shots where many gestures and forms work together is really tricky. Some are more successful than others. 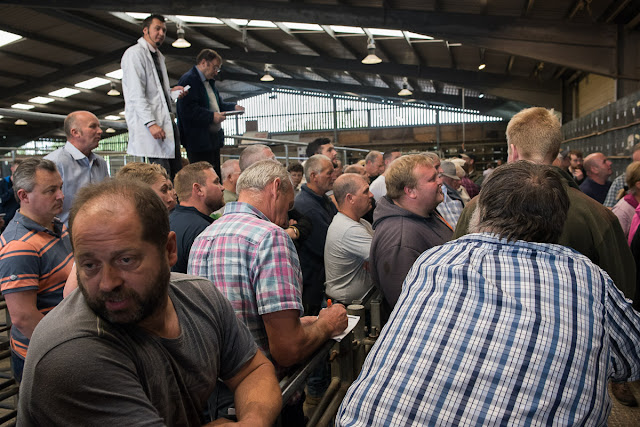 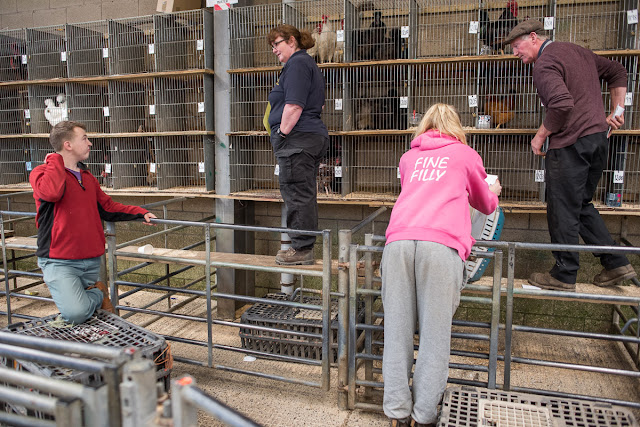 Making pictures in these ways is far more difficult than composing to geometric 'rules' and often means you don't realise what you have until you look at the results back on the computer where the editing takes place. This is as an important part of the picture making process as pressing the shutter release. I hadn't noticed the echoing of the arms in this shot until I saw it on the computer screen. 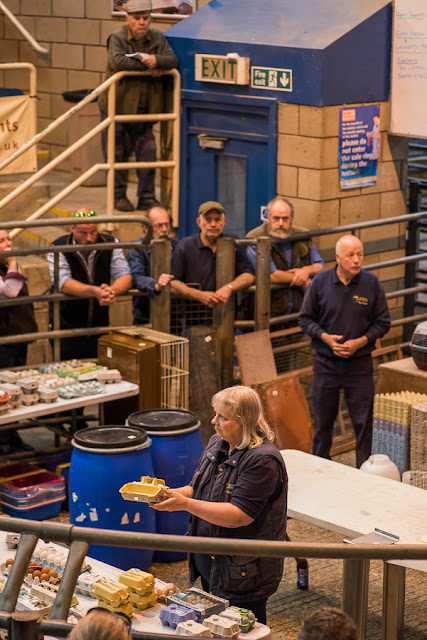 This shot came about from me persevering with a composition for much longer than I usually do. I found myself doing this more yesterday. Perhaps because I wasn't constantly looking for new pictures having exhausted most options!

While I might not have added much to the overall project I feel as if I've made some progress with my photography. Having an enforced break and coming back refreshed might have helped. It can work for sports people, why not for creative people?

Technically I'm still undecided about the toy camera. The overall 'look' of files from real cameras has an unidentifiable 'something'. I think it's the way things go out of focus rather than the shallower depth of field itself. There's something about the richness of colour dynamic range?) that is subtle but appealing. Then, of course, there is the low light performance. Apart from the size and weight of the toy cameras I'm pretty much convinced that they are no less noticeable to other people than large cameras. It's all down to the attitude, body language, and so on of the photographer. Then again I do avoid using large 'pro' lenses. Mostly because I think they make you look like a dork or a journalist!

Is it time to give up on the auctions or not? I'll have one more visit at least. There are still some things I want to try. With the agricultural show season in full swing I might start visiting those in search of fresh subject matter. Shire horses took my eye last year.

Gallery from the day here.