Still out of step

Last Saturday I forgot about a country show until it was too late. It had been raining all morning, so I'd probably have skipped it anyway. Today I ventured forth bright and early, by my standards, and headed for a country show I hadn't forgotten about. Overnight rain would have made teh ground damp so I wore appropriate footwear - and an inappropriate waterproof jacket which I ended up carrying around . I also carried around far too many lenses. 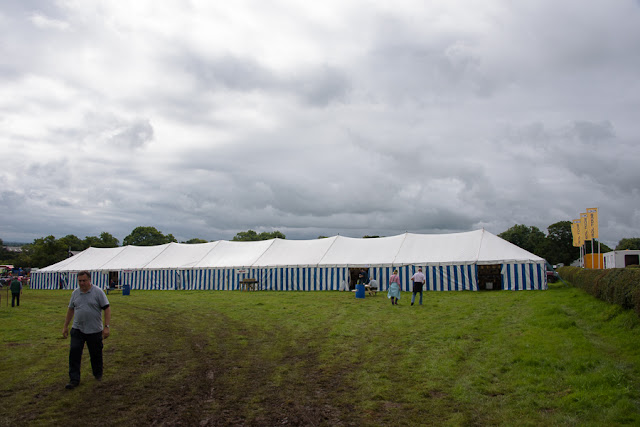 Although my main reason for going to the show was to photography the poultry I thought there might be other stuff that would make for a decent picture or two. I should have stuck with my first choice of a fast medium length zoom and a wide angle. In the end I was using a 20mm on one body and a 50 on the other. When I photographed the pig judging I stuck to 28mm on my superzoom - 24mm might have been more useful. The 300mm end came in handy for the shire horses, but my favourite pictures were taken much wider.

One good thing to come out of this was that I discovered how useful a 20mm lens is in cramped and crowded situations. you can also photograph people up close without them realising they are in the frame. 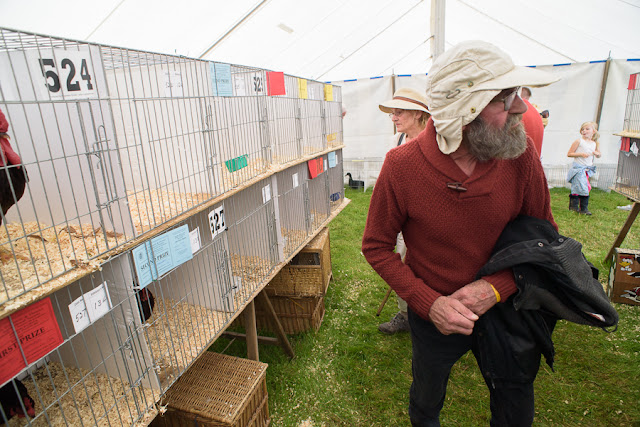 Depending how you angle the lens the super-wide look isn't always too evident. And now I've got over my fear of cropping pictures, mostly due to an excess of pixels, the wide angle serves as a post production zoom lens.

The poultry show turned out to be more of the same old same old. There's not much left that I haven't already photographed. I need to get there earlier to catch the penning of the birds, and wangle my way in to the judging if I'm to get anything radically different to what I already have on file. even so I did manage to get one picture I'm happy with. There's a possibility for making some more pictures like it to produce a grid. 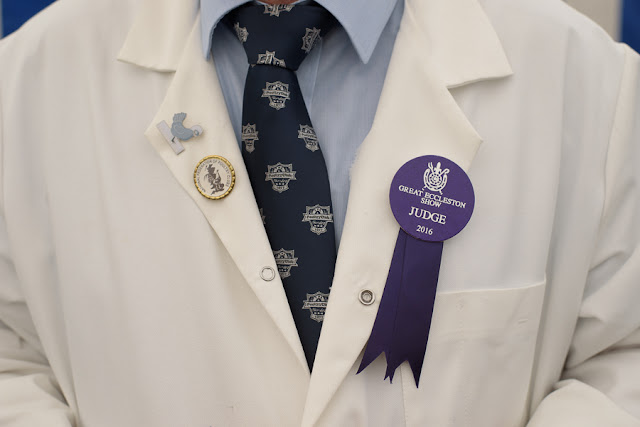 When I see pictures taken at country shows and suchlike events a lot of photographers use long lenses to capture 'characters'. It feels a bit like shooting fish in a barrel to me and I often wonder what the point of the pictures is. But then I try to think of my pictures as belonging to a set that maybe don't tell a story but give an impression of the event. Rather than being the osrt of picture a camera club might award a prize to. I keep finding myself evaluating my photographs using different criteria to thiose which most amateurs seem to use. 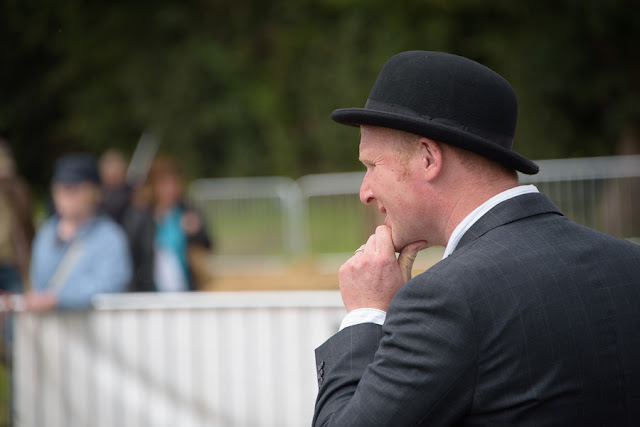 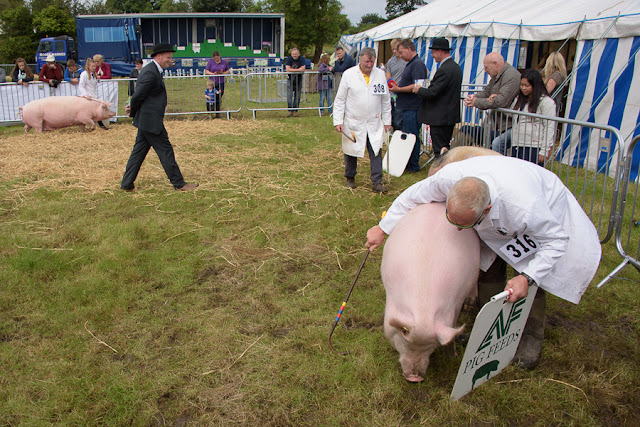 The two pictures above are about the pig judging. Out of context the first one is just a picture of a bloke holding his chin. I suppose it could be captioned with something cheesy like you'd see in a camera club exhibition. But that's not my style either!

I do pictures which do use standard compositional techniques. Bearing in mind that composition isn't just how things are arranged in the frame. The use of colour or tone is also a part of the compositional process. I liked the red, white and blue in this sheep picture, as well as the slight repetition. Serendipitously the blue cable follows the arch of the right hand figure's back. 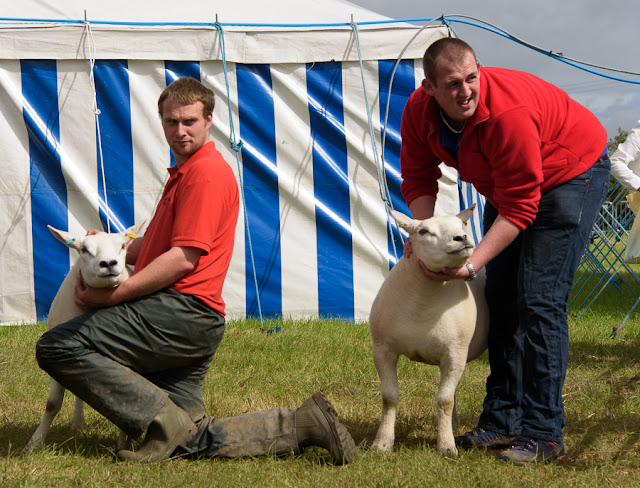 Talking of composition, a bugbear of mine is people using the word 'composure' when they mean composition. Drives me nuts. Once a pedant, always a pedant!

As well as in the pig ring I continued my quest to make complicated pictures containing multiple people in different poses. I have a great admiration for photographers who pull this feat off on a regular basis. It beats me time after time. I get close, but never seem to really nail it. When animals are involved it gets a whole lot harder too! 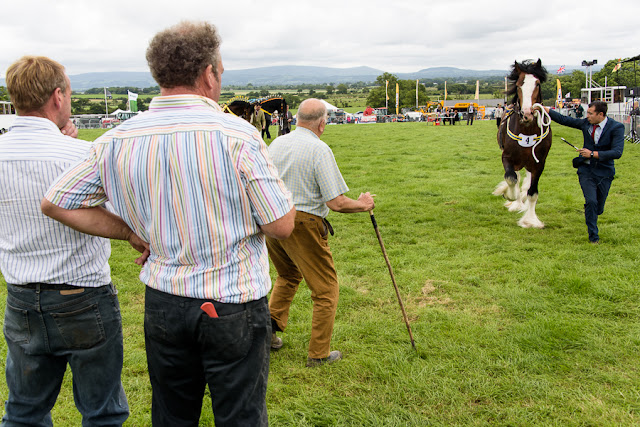 It's much easier when people and  animals stand still. So long as you remember to use a fast enough shutter speed... 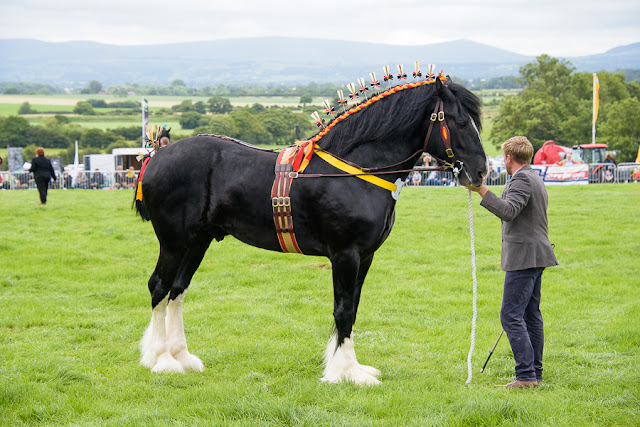 What often gets forgotten when hobbyists talk about composition is the content of a picture. Simplify, simplify, seems to be the aim. Great if you are trying to make pictures that hit people between the eyes. Perhaps that's why they talk of stunning pictures?

The other day I made a picture which was prompted mostly by the reds and whites, set off by hints of green. It also worked as part of my tackle shopping project. As it happened some large printing paper arrived the same day so I made a 12x18 inch print of the frame to test the paper out. I then stuck the print in a frame. Two things happened to the picture. Once framed it looked like a serious picture in a way it doesn't on a computer screen - not even when it fills that screen. Mounting and framing photographs seems to have that effect on photographs.

More interestingly at the larger size I began to see things in the picture I hadn't noticed either at the time I took the shot, or when I'd looked at it on the computer. The most striking being that the water in teh kettle is boiling! 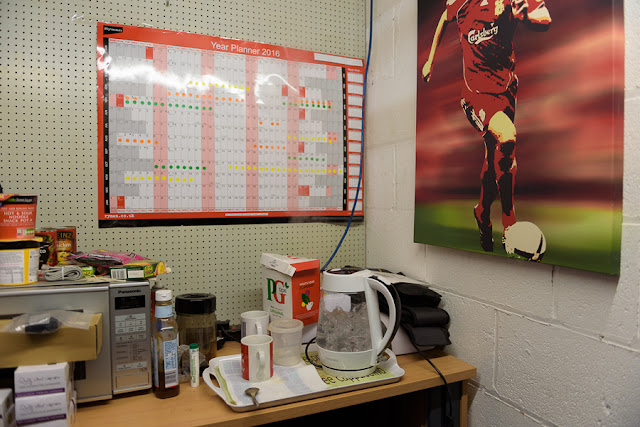 Apart from the fact most hobbyists wouldn't think of taking a photograph of a subject like that, to them it would be a snapshot unworthy of framing, they wouldn't have considered the content of it as part of the composition. That green P on the box of teabags, to me, is an important aspect of the whole frame as much as the patches of red that work across it.

In the frame above with the man bending over his pig the striding judge and the pig in the background are important to the picture. I'm pretty sure hobbyists would advise me to crop that one to eliminate the negative space of the grass in the lower left and concentrate on the man and his pig. But that would defeat the point of the picture. Do these people never look at paintings which allow the eye to wander and discover small details? Important details. These same hobbyists drool over how much detail their expensive lenses and high pixel count cameras can record, but only want to use it to pick out the barbs on a bird's feathers or the eyelashes of a baby. Supposing they aren't nullifying this resolving power by shooting the lens wide open and making most of the picture a mushy blur, of course! That's probably something else 'wrong' with my pig picture. I should have shot it at f/1.8 to blur the background 'distractions'!

More pics from the show here.
Posted by Dave Lumb at 21:37

Feeling all fished out after achieving my number one goal for the summer I've been wanting to get the cameras out again, but it's either been raining or too sunny. Despite the brightness I did take a walk the other day when I thought I might have a way to outline a project - metaphorically. Many wild creatures have a home range where they spend most of their lives, maybe venturing out in search of food or a mate. When I leave home on foot I also keep within a set area, limited by the roadways and paths and my energy. My plan was to take photographs at the outermost points of this home range. Junctions or turning points. The intention was not to make the final pictures but to develop a strategy for how I was going to do this as I took a walk.

At the first turning point I took a lot of shots attempting to depict the place itself. I soon realised that what I needed to show, or suggest, was the route. So I struck upon looking back where I had come from, and ahead to where I was going.

Because these were only test shots I used the widest angle lens I had with me. I could play about with cropping the shots when I got back to the computer. It was at the computer that I felt panoramic crops presented as pairs worked best. 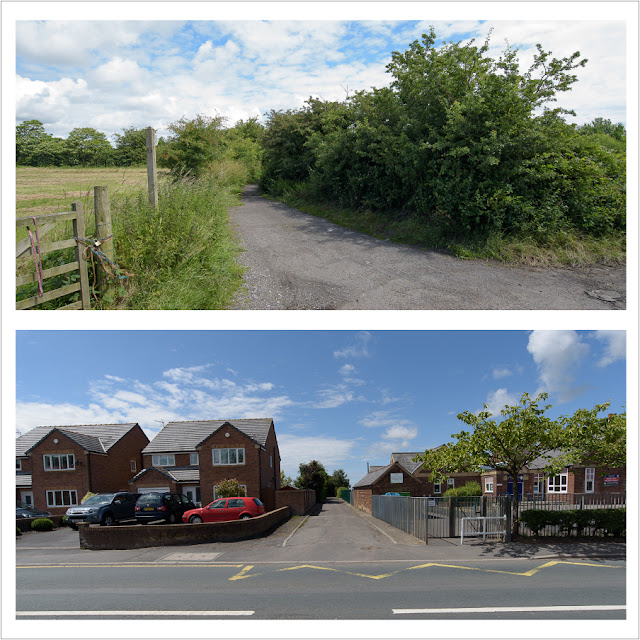 I like the idea, but what I definitely dislike is the bright sunshine and the foliage. All those leaves spoil the view! It's looking like this project will have to wait until winter. Then I'll sally forth with my rarely used tripod and take more care over the framing and focusing of the pictures.

Once more a drive past the sandplant last week revealed another drastic change, so I snatched a quick visit there this evening. Even from afar it was obvious that the last of the big sand piles had gone. The site now looks very open. Not bare because plants are already starting to cover the exposed ground. 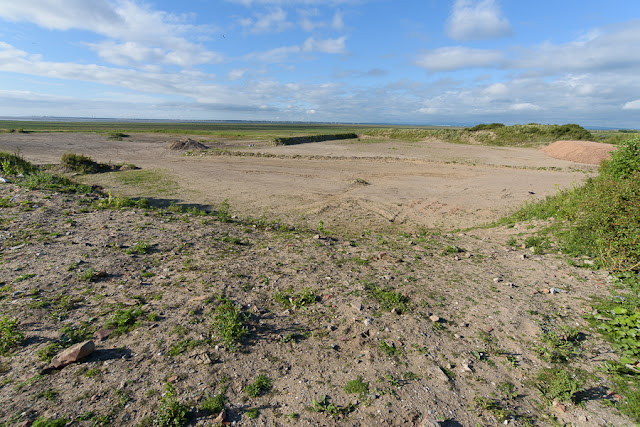 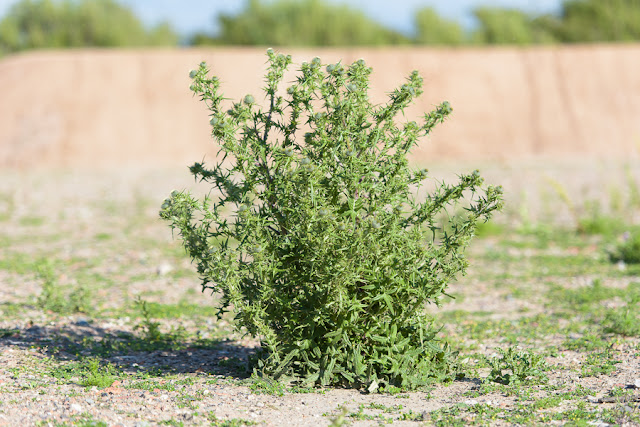 One new feature is a long, low pile of reddish earth that looked less sandy. I should have taken a closer look. Whether this is permanent or temporary remains to be seen. It looks as if this sandplant project is almost done and the hard part of pulling something together from the hundreds of pictures will have to start. Then again, the place keeps on surprising me. So I'll wait and see. Any excuse to put off the selection process! 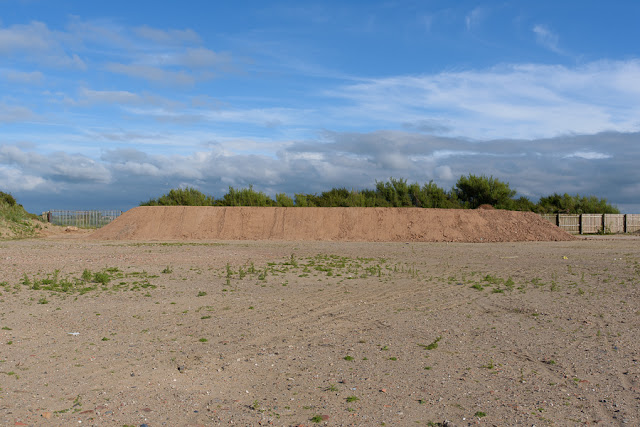 I keep forgetting to use my fast telephoto zoom, but this time I took it along with my wide zoom in photojournalist style. They do make a good pairing. The gap in coverage between 35mm and 70mm is easily worked around. 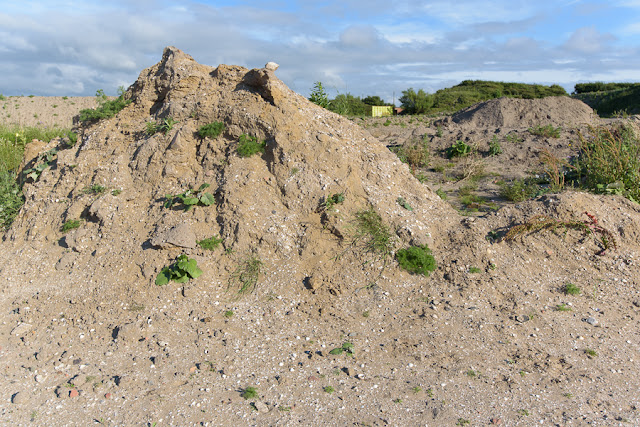