Although I check out The Online Photographer (TOP) on a daily basis because I like the style of writing about photography - down to earth and lacking in artspeak - I'm realising that I'm not a fan of the kind of photography that seems often to be promoted there (or the stress on well crafted prints).  It's the kind of stuff that I was inspired by, approved of, and sought to aspire to when I was starting out. A cut above the usual camera club formulae, but somehow still formulaic. It feels rather dated.

This was brought home to me by a recent posting of a chicken photograph, and a link to the photographer's website. As it happens I'd seen her photographs before and had that same feeling of disappointment the first time. At first sight they looked really impressive. The more I looked, however, the more obvious the appeal and the less there was to see. They don't ask any questions, they don't contain surprises. The subjects seem (for the most part) irrelevant to the structure of the photographs. Cats and chickens being interchangeable. One commenter said the work wasn't romantic - yet it seemed highly romanticised to me. Cow pictures have been better done by Keith Arnatt.

And therein lies the dissatisfaction I find with 'fine photography'. It's too much about process and perfection. Arnatt's cows are sometimes shot using harsh flash, the compositions are 'off'. But the results are more engaging - to me. They are pictures I can return to.

Maybe this is just an expression of an appreciation for a different aesthetic, perhaps born from the ideas that are surreptitiously instilled at art school - to always be trying new ways of looking at and doing things. Maybe it's got something to do with the original punk ethos of making rough and ready music with limited technical ability.

I think that TOP is too hung up on the photography side of picture making. There was a quote from Matisse posted on TOP a few days back which rather sneered at. Unsurprisingly I thought the final part of it was pretty much spot on - Photography should register and give us documents.

This is just me rambling away with off the cuff thoughts - which I'll probably contradict in teh not too distant future.

Anyway, while loosely touching on style here's an example of how it shouldn't be used. Fast lenses shot wide open automatically give pictures a 'look' that seems to be almost obligatory on Flickr. That shallow depth of field automatically gives photographs a look of quality! Fast lenses do give you greater control over depth of field, but that is to be used wisely. Pictures, especially documents, are about information. The first shot here looks 'dreamy' but doesn't hold as much information as the one below it. 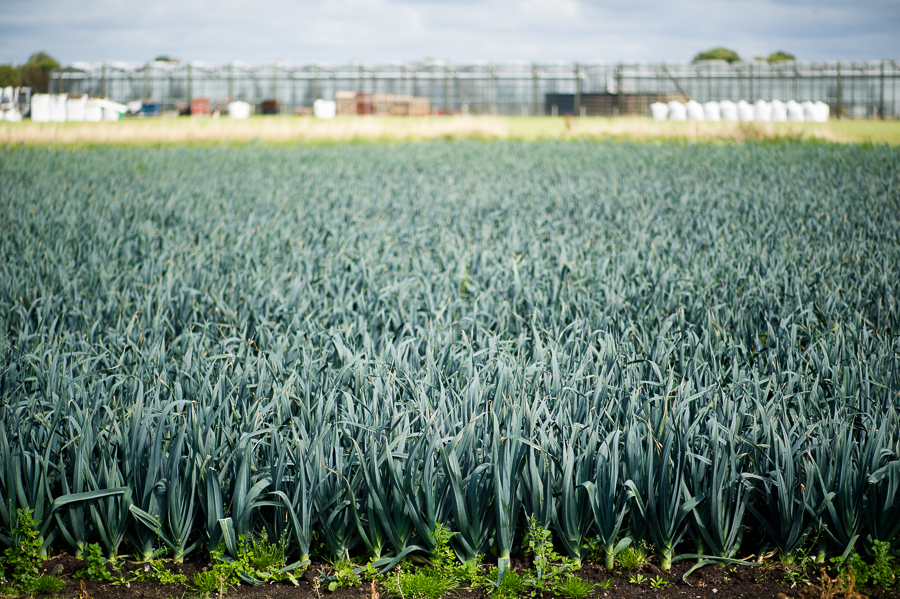 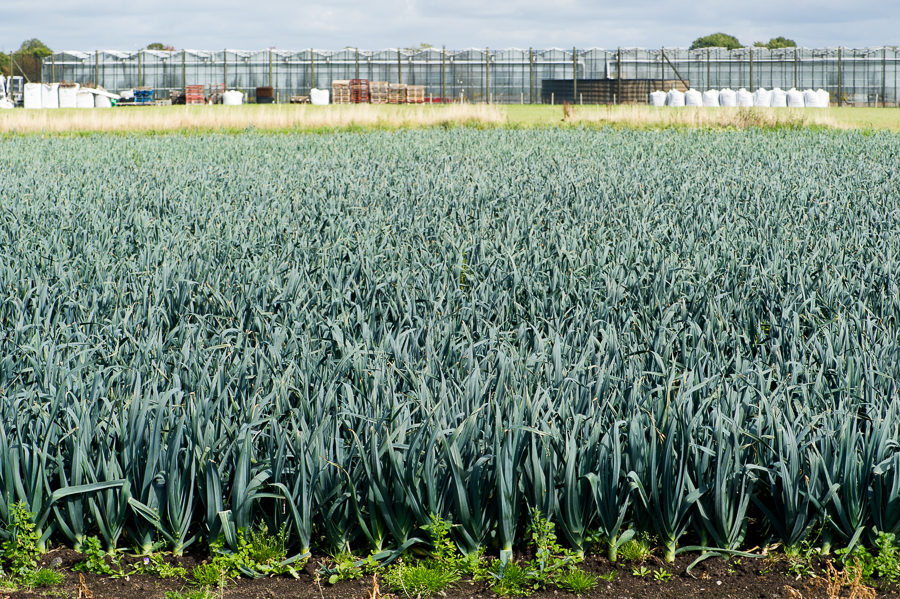 Because my intention was to make a document of the kind of farming that takes place around my village (there are acres and acres of leeks and glass houses) I took the lower shot first - then the upper one to make a point on this blog! This is part of my attempts to build up a set of pictures about the village.

At the risk of  immediately contradicting what I wrote earlier, I am trying to make many of these pictures somewhat obtuse. Which seems an odd ambition for documents. A picture of a leek field is obviously about farming, that a couple of parking cones are about a rugby club less so! By the time there are more pictures, sorted into a sequence or juxtaposed, it might all make some sort of sense. Or not, as the case may be... 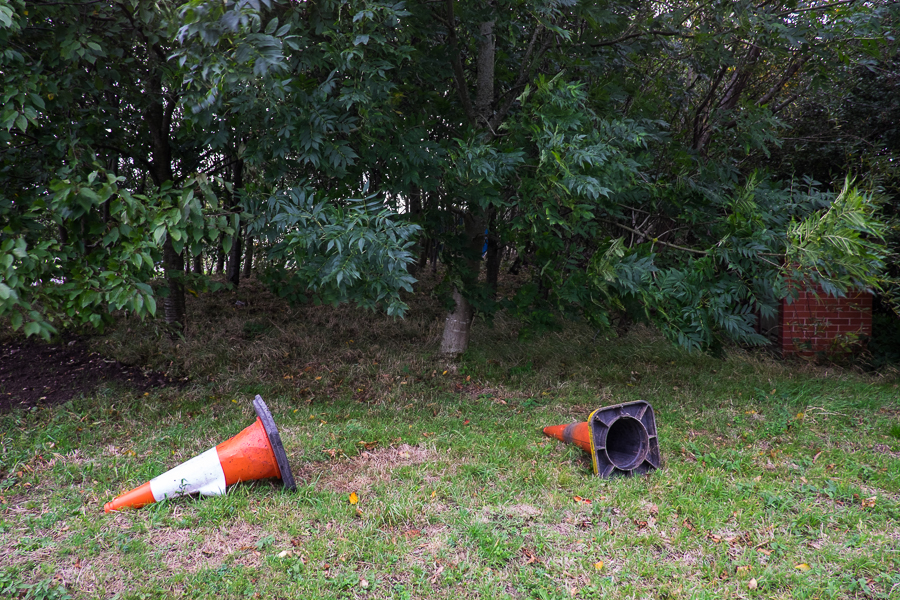 When it comes to processing my photographs I try to keep things as restricted as possible. In the darkroom (read 'bathroom') all I ever did was vary the exposure and the grade of paper. In all honesty the paper never seemed to make much difference. Dodging and burning was beyond my abilities and the capabilities of my cheap and nasty enlarger.

In the digital darkroom dodging and burning is a doddle. As is altering contrast, colours and all manner of other things. Because it's so simple it's also all too easy to go too far. But every now and then a file opens in Lightroom which demands a bit more than my usual treatments in order to make it something else.

There's been an old second world war helmet hanging in my slowly decaying shed for years. It's a long story how the helmet came to be there, but when I went in to get my slasher yesterday evening there was a sliver of light falling on the helmet, now surrounded by ivy and cobwebs, which gave the scene a melancholy air. Perhaps with thoughts of the recent WW1 commemorations in mind I went to get a camera and take some photos. One of them was better exposed than the rest - that shaft of late sun in the shade made exposure tricky. Better to expose for the highlight and hope that processing would lift the shadows without too much detriment. 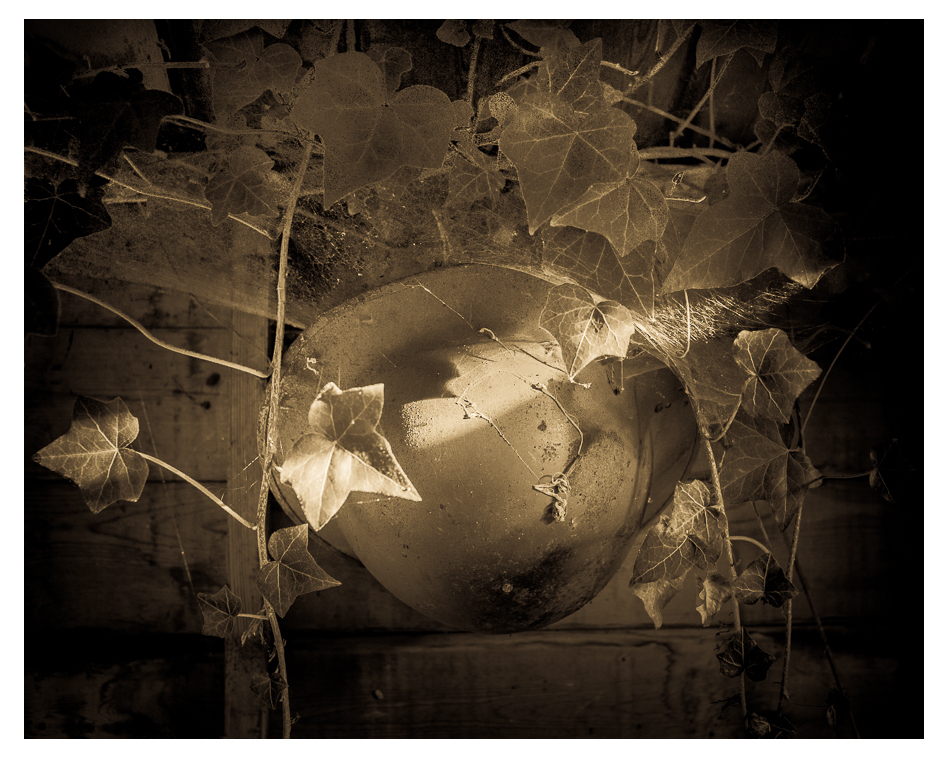 Although I prefer to make colour photographs these days this one wasn't working. First I made it black and white, then I gave it an aged look. This seemed to fit the subject, which for once was in keeping with a nostalgic feel. Then it was a matter of getting the contrast and detail I wanted, partly by altering the overall tones, partly by playing with the colour sliders to lighten the ivy leaves, and also by using a brush to dodge the top portion of the frame and bring out the leaves there. Finally a vignette was added. It took me a lot longer than just putting an 'S' curve in the tone curve! I think it works well enough for what was, essentially, a quick snap.

Make it easy on yourself

Getting technical with artificial lighting has always baffled me. I might have mentioned this before, but I have finally discovered a way that works for me to photograph 'products'. It works because it's dead simple. No light stands, no umbrellas or softboxes, just the one flash gun on the camera.

Place object on white paper, flip the flash head round to point at the white ceiling, boost the output by one and a third stop, set the camera to overexpose the meter reading by one stop and off you go. Easy to correct minor exposure errors or make the background pure white in post. Good enough for me! Anyone want to buy a couple of flashguns, light stands and umbrellas?

One great piece of advice in On Being a Photographer - David Hurn and Bill Jay is that when deciding on a project it should be practical to work on. My loosely defined 'parking' project is just that. There's subject matter almost everywhere. Signs, in particular, interest me in any case. So I photograph ones that relate to parking. The last few days have got me a couple which I'm liking at the moment and which might be pushing me in a new direction. 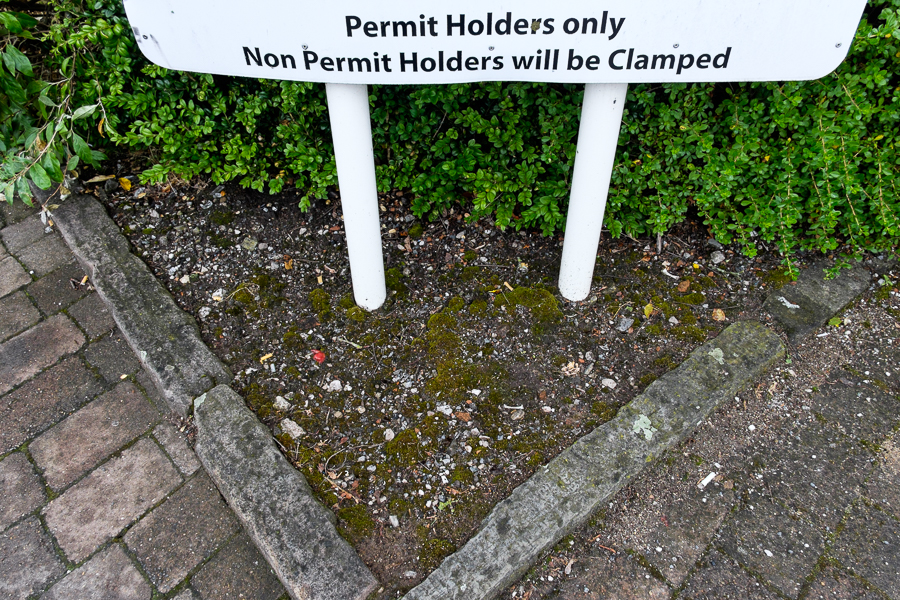 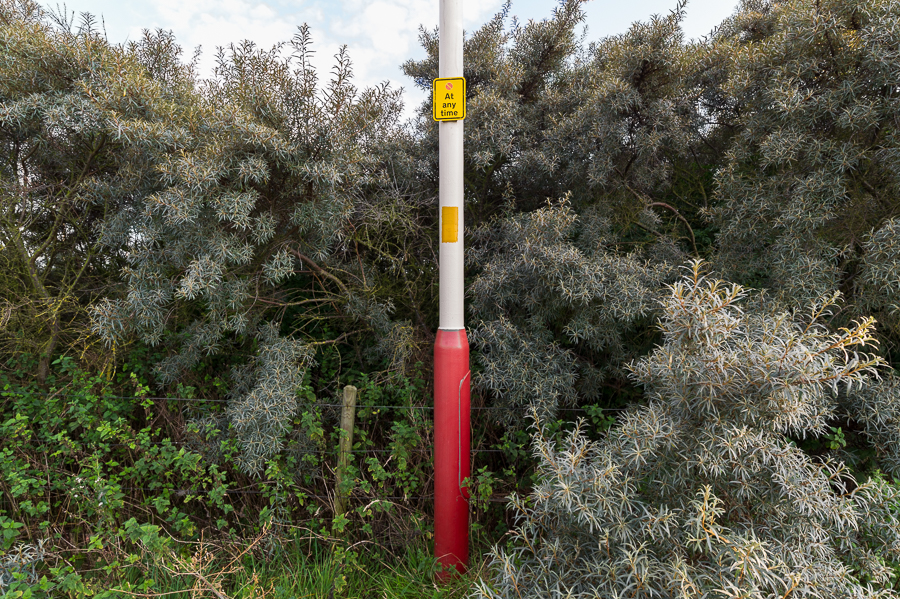