I've found Brian Eno interesting to listen to since 1974. Although he's known for his involvement in making music he's been an influence on visual artists too. His comments about inspiration and being creative in the video below are what most people don't want to hear; that they both come from just doing stuff and noticing when something interesting has happened and acting upon it. Teachers don't like this because it takes away they're instructional purpose, would be artists don't like it because it means they have to bugger about doing stuff that mostly gets discarded.

That is precisely what photography is - the more pictures you make the more good pictures you make. Not because you get better at making pictures but because there are more pictures. Martin Parr says pretty much that somewhere in the video below. Out of 600 pictures there might be 20 good ones that are more than documentary pictures. Which suggests to me that 1 in 30 is a good hit rate when you consider the 600 has already been filtered down from many more!

It seems that my documentary head is back in place. A walk round the sandplant today suggests that its days in it's current state are numbered. I have no idea if the process is being documented officially. If it is it probably won't be in the way I'd do it. 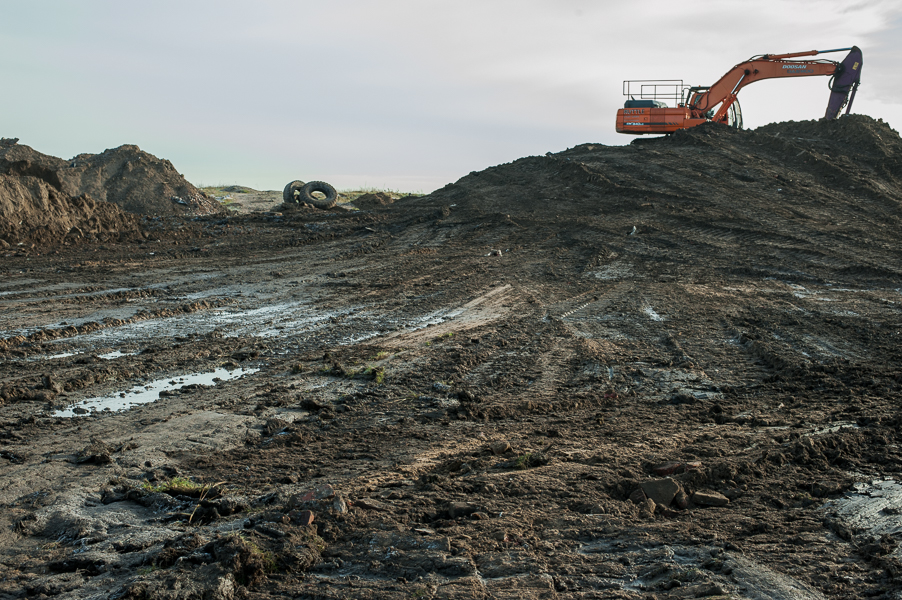 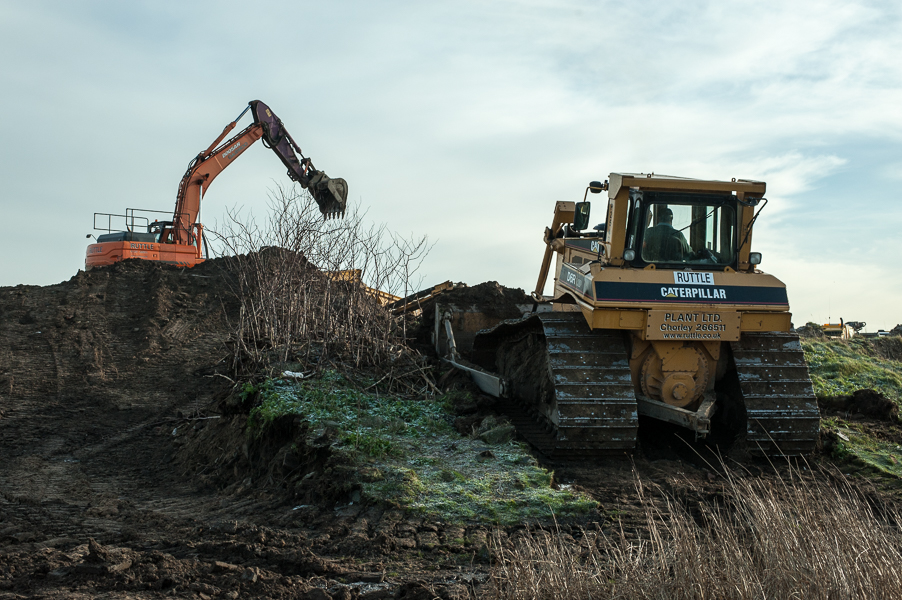 It's all too easy to imagine that documentary photographs are little more than snapshots, but at their best they can aspire to be pictures that show what is being documented, work as formal compositions and possibly express the point of view of the photographer - if we accept that no photography is strictly objective and always has a 'spin' on it.

I feel like the mojo is returning. Oh to have the free time to take the photos I want to and not have to occupy the daylight hours earning a crust!

There's a part of me that thinks the only photography that makes any sense is documentary in nature. There's another part which likes playing around with ideas and what the medium can do. At times each part thinks the other is pointless!

One the one hand I feel like I should concentrate on documentary projects like the one I'm sort of doing about my friend's tackle shop, and the pictures I've taken at the poultry shows and at the beach. The kind of photographs that record everyday life and which I can imagine other people wanting to look at and maybe raise a smile or two. 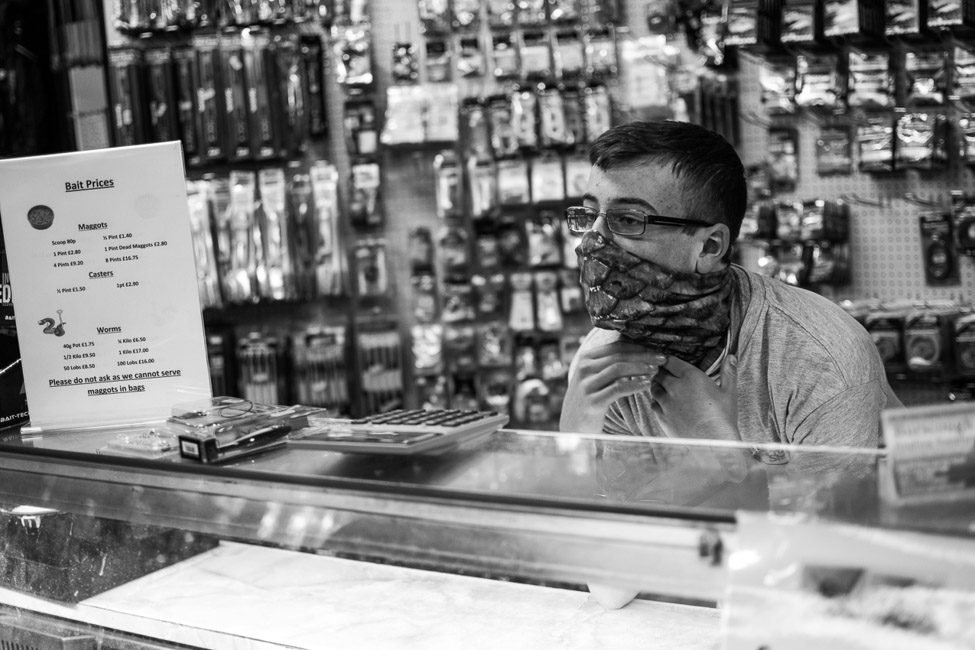 On the other hand I find I like the more esoteric pictures I make. The ones that even I don't always know why I fired th eshutter and which often leave other people shaking their heads. Stuff that isn't always pin-sharp. 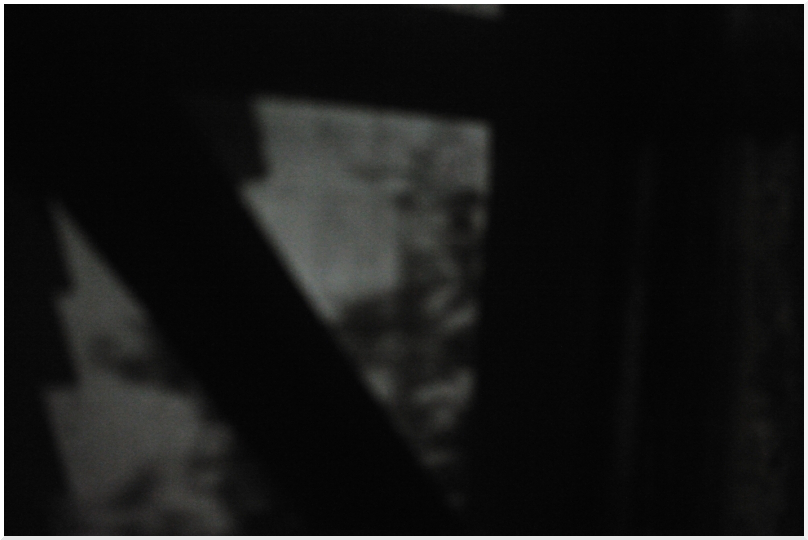 Stuff that really doesn't make much sense at all. 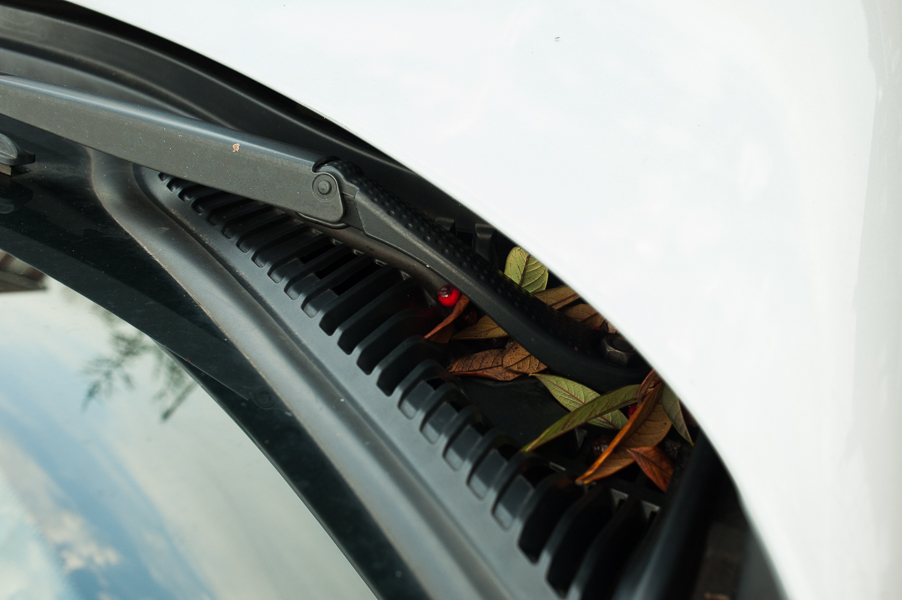 Yet somehow, in my imagination, it's all documentary. It's all about documenting the way I look at the world around me.

One thing I'm slowly managing to shake off, which is a good thing, is the urge to make 'good photographs'. Breaking out of the formal structures that sprang from the likes of Cartier-Bresson's work, the capturing of great light and colour seen in the 'Nat Geo school' is difficult. It's all too easy to ape Winnogrand, Eggleston or Parr without understanding what they are doing. The wonky camera angles, mundane subjects, on camera flash. I know because I've done that - still do at times. Finding a way to channel influences while putting your individual stamp on things in an intuitive way is really difficult. I find looking back through my pictures helps. Every now and then I see something that I feel is a bit different. Then the temptation is to repeat it, which is almost as bad as copying someone else. It's not easy, yet some people decry it when you talk about making pictures as making work!

Why amateur photographers think that making good photographs has to be fun and relaxing is beyond me. Maybe that's my background, or maybe it's just that I find it more satisfying to achieve something that isn't easy than something which hands itself to you on a plate? I'd no sooner catch fish after fish from an overstocked puddle than I'd only take photographs when the light was 'right'.

It's not as if I haven't been using a camera for the last month, it's that what I've been doing with it hasn't been panning out right. Despite pursuing the project about the village and it's surroundings and a more tightly targeted concept about the land between the river and the houses which look over it I've just not been managing to get things to come together.

The river pictures simply didn't work the way I'd hoped. My own fault for diving in with a plan. It never works for me. There seem to be photographers who are attracted by the control they can exercise over the medium. They plan every aspect of their work from concept to completion. The epitome of this approach is studio photography. Then there are photographers who are attracted to the medium for its spontaneity and the ability it gives them to record the unexpected. These are people who like to use chance to help them make pictures. I'm very much in that category. It was seeing a sofa dumped in a field at the side of a road crossing the moss that gave me my best shot recently. 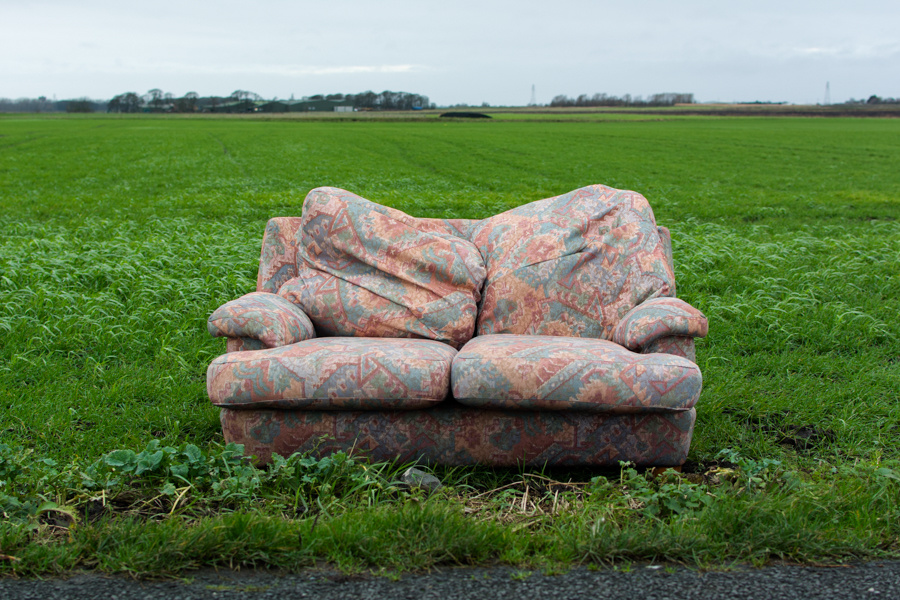 It's a little incongruous, but the colours are complimentary and I'm glad I stopped to make the photograph - even though it was at the third passing. The next time I went that way the sofa had been removed. I still let too many opportunities slip away. More spontaneity is required. Not to mention having a camera with me. 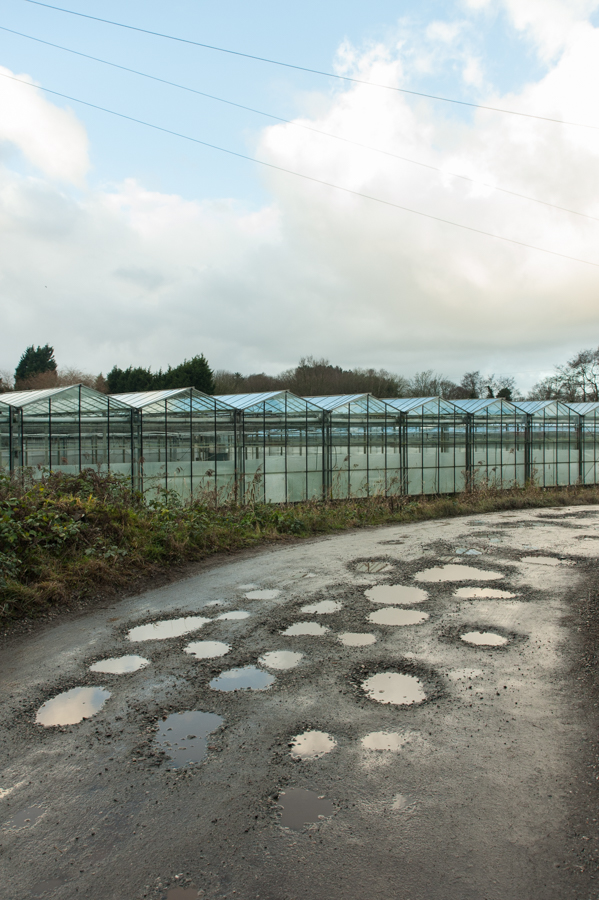 One recurring difficulty with photographing the everyday in an attempt to make pictures which are also documents is to do it in a way which makes pictures that are neither ordinary and clichéd nor obviously trying to be different. This is the constant battle I'm having with the village pictures.

It's too tempting to make the sort of pictures that would appear in a guide book if the Parish Council were to publish one. The sort of thing with classic composition and great light. The light is quite good but I don't think some rain filled potholes would give the impression the village elders would like to present.

Feeling stumped by the village I ventured out to the marsh in search of light and inspiration. As usual the light deserted me almost as soon as I arrived. There was a hint of inspiration. Not that I made a ruck of great pictures. I did, however, get an idea for how the marsh pictures might develop. Not as landscapes but as sets of close-ups, or details. I may be able to work that up into something. Then again I might have gone as far as I can. The earlier set of four I made have now been whittled down to a horizontal set of three and joined by a vertical pair. Quite what could come next I don't know. It'll be interesting to find out. 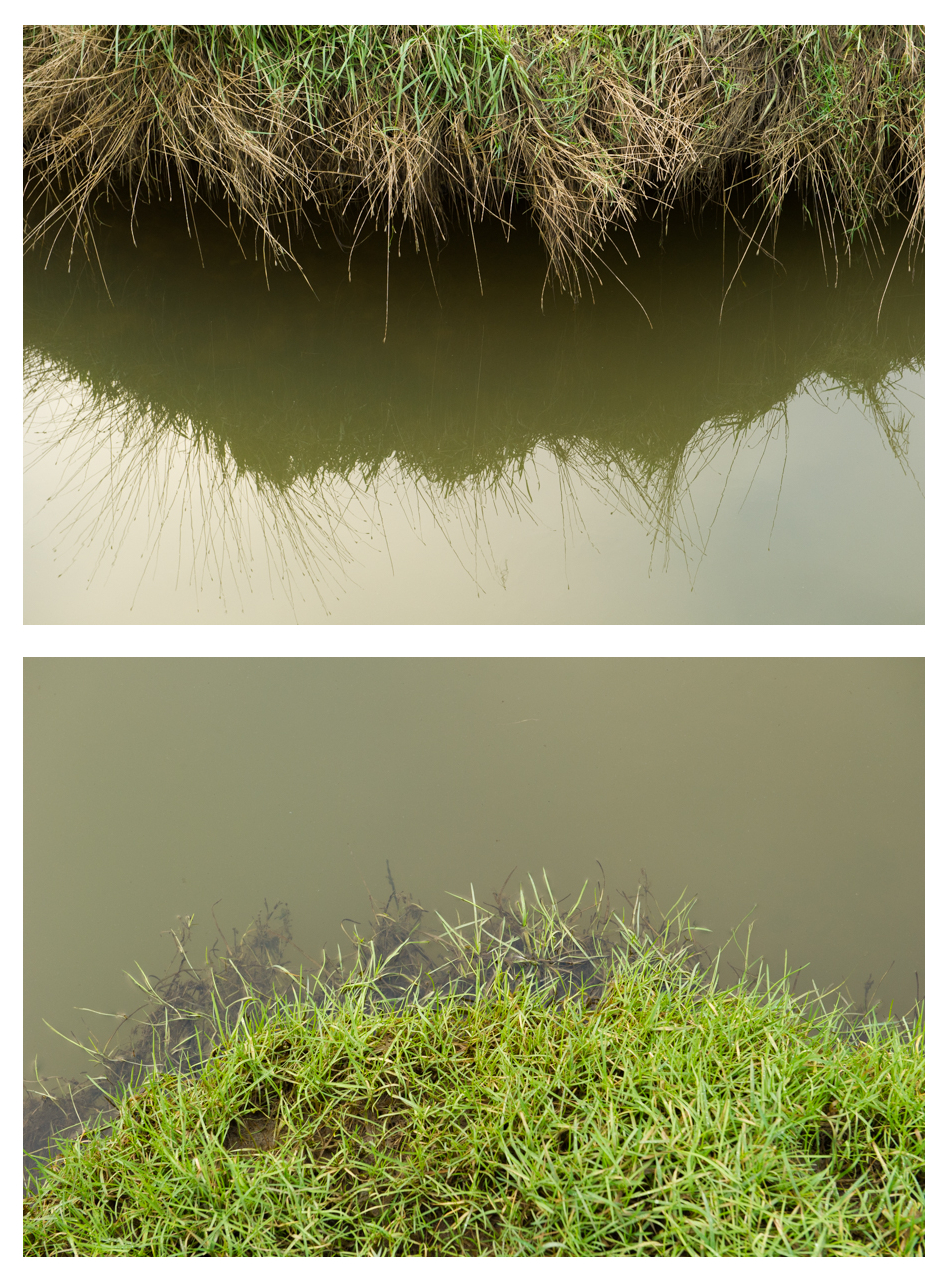 And so the floundering around continued until yesterday when I saw that there was something going on at the sandplant. I'd pretty much decided that I'd done with the place but seeing there was heavy plant in operation I had to take a look. This morning was my first chance.

Sure enough the place was being changed. The easy way in had been partially blocked by sand dragged from the bunds to either side and stuff had been moved around inside. Lumps of concrete which had stood like monoliths for years were piled together and heaps of rubble were being demolished. Ground up and graded. The plant was neatly parked, it's tracks evident in the damp sand. With the sun low and bright I started to see pictures. I began to feel like I was in the groove again. 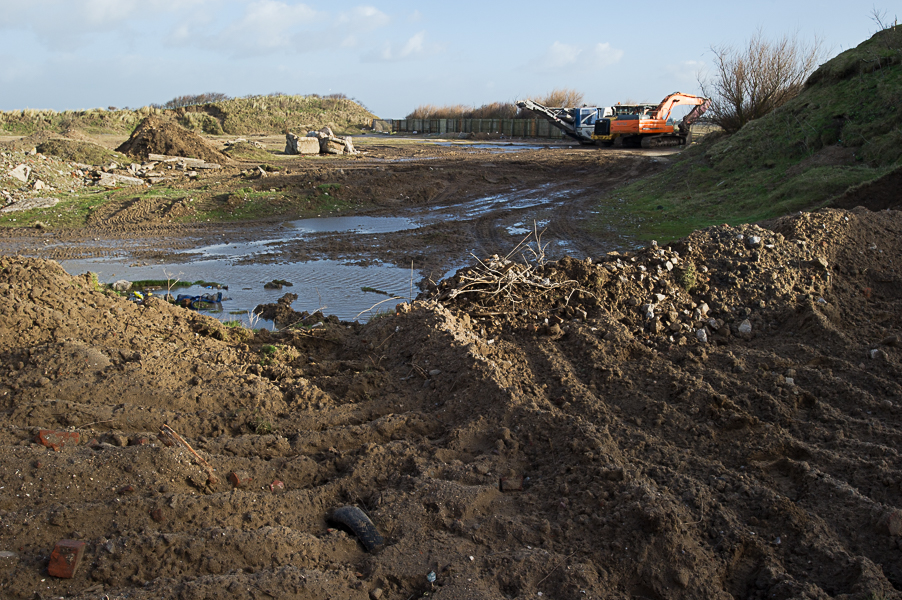 I was still struggling between the straightforwardly and the self-consciously made pictures. That's pretty much a given though. I was once more struck by how machinery and architecture make for graphically interesting pictures which seem to suit photography. I think it's the possibilities for abstraction, not to mention the straight lines and hard edges. Photography and manufactured objects go together in the way natural objects and painting do. Straight edges are more easily rendered by photo-mechanical means while brush strokes match natural forms. I think that's why I find it easier to make photographs in towns than in teh country, despite feeling more at easy in the latter. 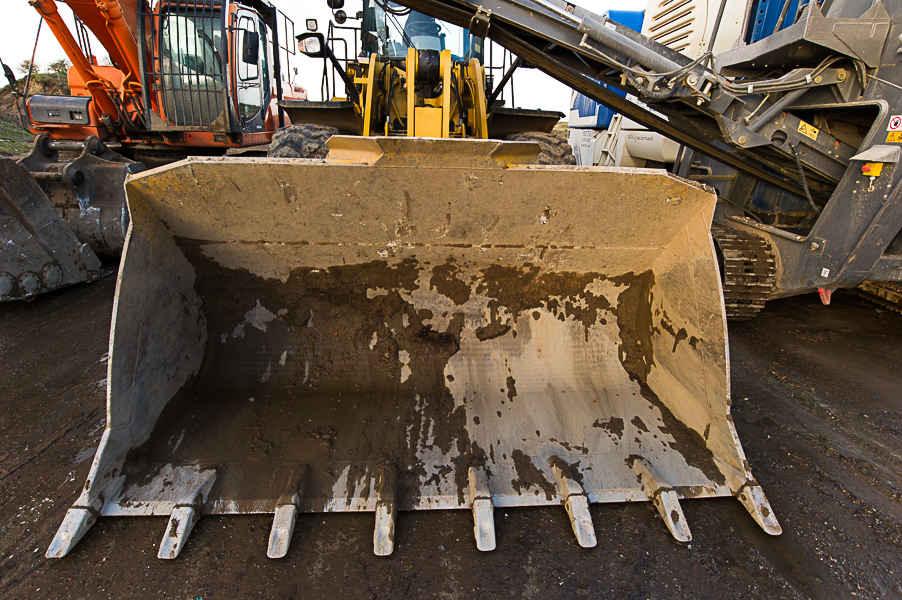 What the plans are for the sandplant I don't know yet. It's possible what's going on is a temporary reclamation phase to extract what hardcore is available. Maybe it's the beginning of the end for this abandoned, but used, site. What is certain is that the pictures I've made there in the past have become documents.

The more I think about photography the more I believe that it's strongest feature is its documentary nature. In fashionable photo-thinking thinking this seems to be decried. The editorial of this month's BJP where the "waning popularity of documentary lyricism" is mentioned and the notion that photography is more concerned with image than idea. Photography has always been concerned with ideas. Making documents is an idea, lyrical or otherwise. It's my contention that when the ideas are more important than the images the pictures tend to be a bit ropey. It's similar to the way that conceptual art is far too frequently more interesting intellectually than it is visually. If you are making things to be looked at and thought about then they have to be interesting to look at as well as think about. Both the ideas and the images have to be equally strong. A lot of contemporary photography simply isn't visually interesting enough. And using an interesting technique doesn't help. The strongest, most lasting, photographs are, to my eye and mind, straightforward. They don't use tricks or style to catch the eye. They don't need them.

All very easy to say, much, much harder to carry out. It's the crux of the continual struggle to make good pictures which are interesting visually and intellectually.

"When the stuff is too journalistic and documentary then it is journalism, if it is too conceptual and arty then that is another thing, but where the two meet - that is interesting."
Tom Wood

More from the sandplant below and larger here.