Still lacking direction I keep on snapping away in the knowledge that eventually something will click. Looking at the pictures I've made over the last few weeks there does seem to be a feathery connection. One a work party on a local fishery one of the other members brought his goshawk along for some fresh air. I'd taken a few shots of it a few weeks earlier but didn't have a long enough lens and it wasn't in the best of positions. This time I had a longer lens (one the nerds would scoff at, of course) and enough time to get some decent poses. With good technique - as in concentrating on what I was doing instead of snapping hastily - the results were pleasantly detailed, and I managed to get a soft background to isolate the bird without recourse to wide apertures. 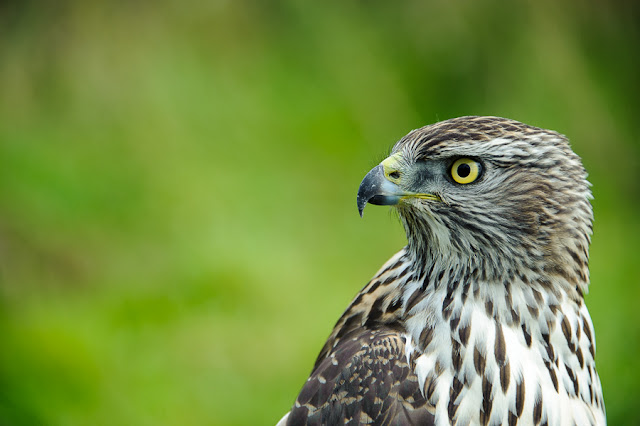 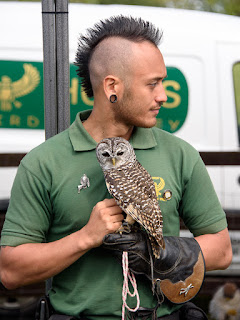 A few days later I was at the animal sanctuary again, this time for the Fun Day. The sun shone most of the time, which made life easier, and the creatures were under control, which also helped matters. Something that I found odd was that whenever I pointed my lens at a bird that was being held the handler would stretch their arm out so I couldn't get them in the shot.

I imagine that most amateur snappers are intent on getting close up shots of the birds with the same kind of background as I found for the goshawk. What I was after was the relationship between bird and human. More interesting to me. This was something that cropped up in a conversation with someone at the poultry show I attended last week.

The chap had been to the national show where a news photographer was taking photos of people with their fowl. His focus was on interesting looking people, whereas the chap I was talking to (a poultry fancier) was interested in photographing the birds. I guess this is a case of knowing your audience. On the back of this conversation I bought a couple of back issues of Fancy Fowl magazine. Sure enough there were more pictures of fowl than folk!

As I strolled around the sanctuary I was once more struck by how difficult it is to take interesting pictures in these situations. I'm sure that the more you attend this sort of event the easier it gets. It wasn't so much a reticence to point the camera at strangers as getting an eye for a shot. The sort of stuff I see on forums was easy enough. simple record shots of something interesting, but actual pictures are far harder to see. I was trying to get something interesting in the foregroud while having more, slightly out of focus but readable, stuff going on in the background. Timing things so they all fall together is really difficult. More Fun Day pics here. 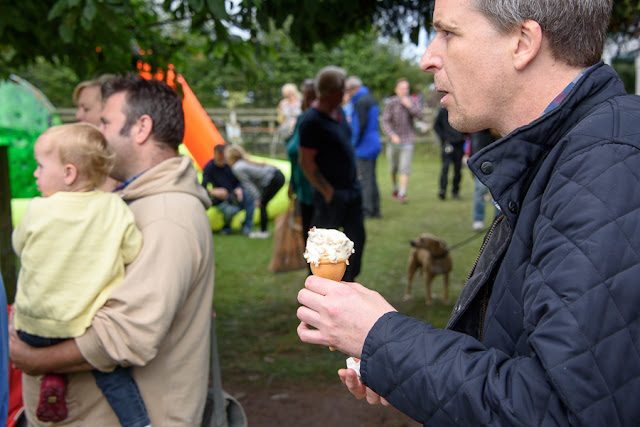 A week later it was the poultry show. I'm trying to build a collection of photos that cover a wide range of aspects of the shows, rather than just pictures of birds. With the autumn sun shining it was easy to get a wide view of the show building and the cars parked around it to set the scene. 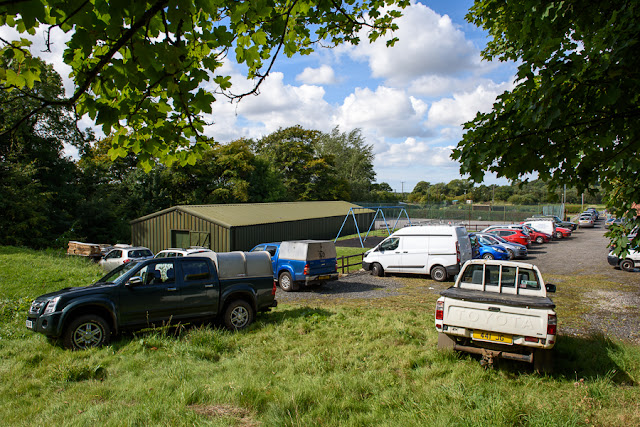 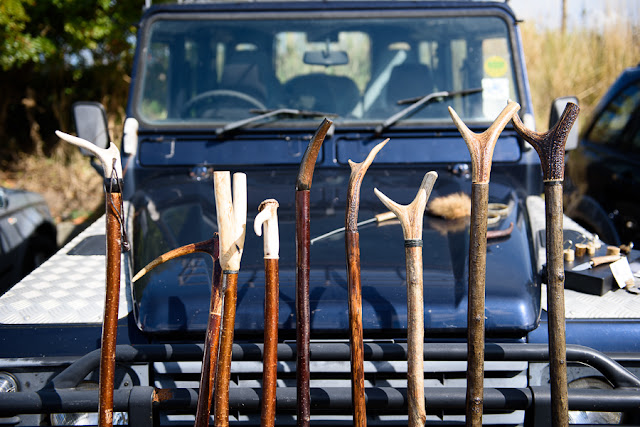 The lighting inside the show building is always a challenge. I was trying out a zoom lens for convenience, unsure if it would be fast enough. It seemed to cope well, and the closer focusing distance at the long end than a similar fixed length lens came in useful for trying to take a set of pictures of chicken legs, and other close ups. One of the trickiest things to overcome is the cycling of the fluorescent tubes, which makes using a fast shutter speed difficult as the white balance alters through the cycle. A fast shutter speed can be a big help with twicthy chickens! 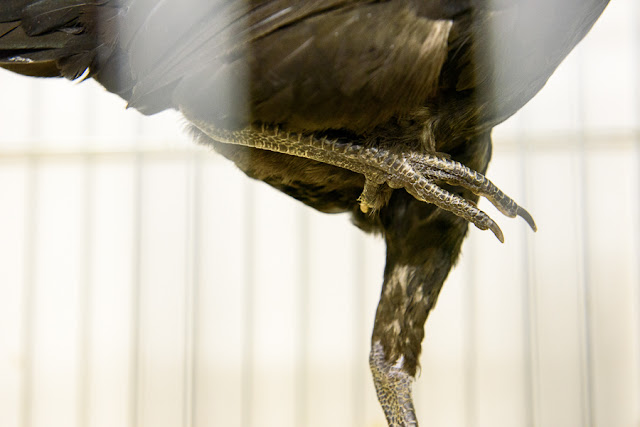 Once more I tried to make some pictures with interest throughout the frame. I know the mantra is to simplify and not have distractions in the background, but that makes for boring photographs. Small, apparently insignificant, details can be surprising. Timing is everything. The shot below was the third of a short burst. It almost worked out. Mostly though there are bits in each frame that work, and if they were all combied in one shot would work really well. Just keep on trying, I guess. 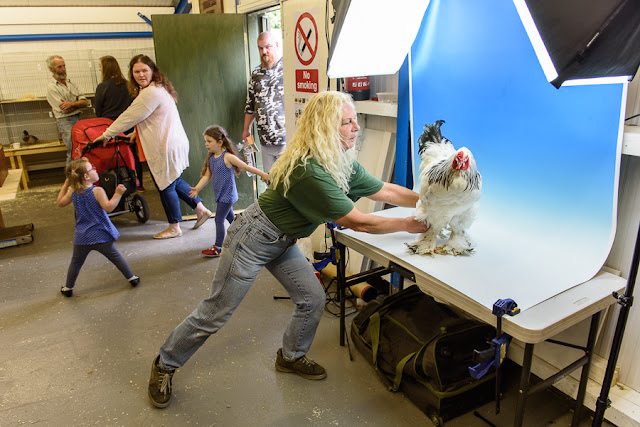 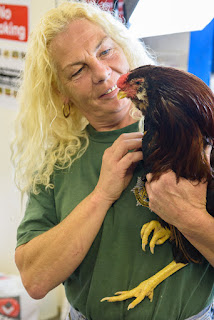 While the regular photographer was otherwise engaged the chap I'd been talking to was using the 'studio', so I had a go from the sideline.

The lighting set up is just right for what it's designed for. The regular photographer uses on camera flash for fill, and with patience over the posing he gets consistent results for people who want to look at the birds from a fancier's point of view. From my point of view the birds might as well be made of pottery as the pictures are all the same.

Although the bird on its own is a (slightly) technically better photograph than the one of it with its owner, I much prefer the latter as a picture. There's something going on in it that anyone can relate to. Whenever someone says that photography is 'all about light' I want to scream. If the subject isn't of interest the 'best' lighting in the world is wasted. 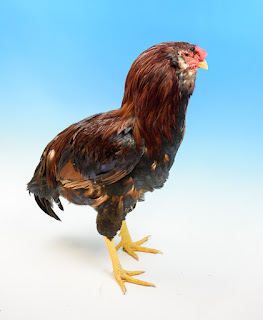 Could birds and people become a project? I suppose it could, but once more as soon as I find myself making mental notes on how to plan it out I find myself losing interest. It's that distinct lack of a work ethic in my make up. Doing anything to a plan feels like work. And I can't abide work!

Every time I recommend a lens to someone on a forum I get slated by the resident experts. The lens is always a dog. Soft as can be or terribly slow. It's as if being small and lightweight, or having a really useful zoom range, is irrelevant when choosing lenses. I suppose if you have the strength to carry around every lens you own in a big bag, along with a flash gun, tripod and a full set of filters, then a small useful lens isn't worth having. But if you prefer to take a camera almost everywhere without wearing yourself out light and useful trumps heavy and sharp. The funny thing is that the useful lenses I have are plenty sharp enough. Well, they are for me.

I have a sneaking suspicion that those who only use the 'best' lenses have to justify the money they've spent on them by imagining that the difference between useful (cheaper) lenses is immense. When it really isn't. There might well be a difference, but whether is is noticeable in real life I doubt very much.

Having been told that one of my favourite lenses was a real dog I thought I'd better reappraise it. I took some photos with it in order to zoom in on some fine detail. Strangely it looked perfectly fine to me - even zoomed in to 100%! 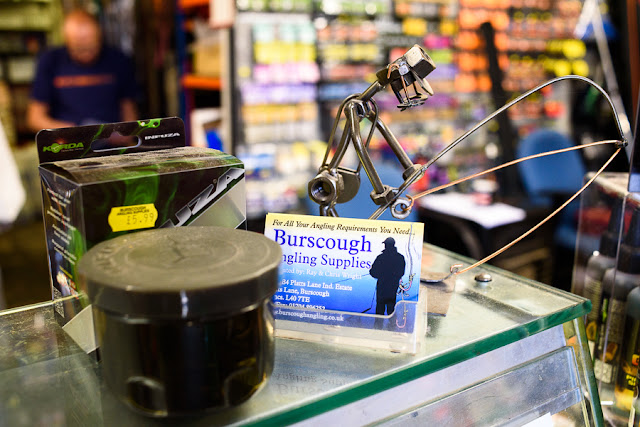 I wonder how many times I've taken photographs of that sculpture thing? There's something about it that I'm sure will make a good picture, but I've never quite managed it. That's a feature of my photography, shooting the same subject over and over.

There are some greenhouses I walk past every time I go along the canal. I've photographed them time and again too. I think I made a decent picture of them recently, at the second attempt. Some poppies had sprung up in front of them and were in flower. One dull day I tried using the camera's pop-up flash, but the sky was grey. A few days later the sun was shining, the sky blue and something seemed to click. I don't pretend it's a great picture, but as part of my ever growing collection of pictures from the village it makes a kind of sense. 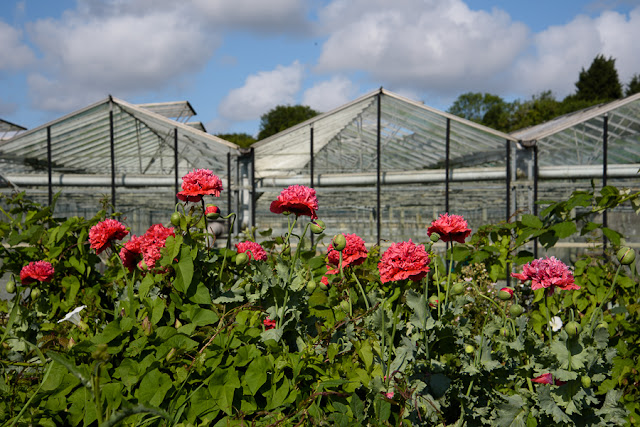 Lo and behold, it was taken with a 'less than optimal' zoom lens. I'd better not mention the UV filter on the front or the Image Quality Police will have me banged up!

I find myself increasingly disinclined to bother posting on 'that' forum'. All that ever seems to matter is image quality. Be that sharpness, creaminess of bokeh, or perfect lighting. There's so little interest in making pictures. Don't get me started on the state of street photography. Any old crap passes muster there. And what's this fascination for going to events and taking tightly (but often badly) framed shots of 'characters'? Oh dear, I'm ranting!

All this is by way of saying that I'm stuck. I've got ideas that I can't seem to organise, or find the time to carry out. The Big Project I was planning did just what I thought it would do. Fizzled out. The reason was too much planning. I got as far as making some dummy pages for a book, starting to write an introduction to the project, even making a list of subjects and how to photograph them. That was where I went wrong. Doing all that used up my creative urges. I'd done all the thinking. All the interesting stuff. What I should have done was jump straight in taking photographs. There was another aspect that put me off. It was all getting a bit journalistic. A bit regimented too. I prefer restrained chaos where I'm never sure what might happen next. That element of chance that might lead to success or dismal failure. But which is always thought provoking.

This goes against the grain for some people. At the moment I'm struggling to read The Creative Life in Photography by Brooks Jensen who stresses the need to visualise the finished project in as much detail as possible because that creates a strong compulsion to complete the work so you can hold it in your hands. Visualising the finished work in all it's detail has precisely the opposite effect on me. I knew exactly what my Big Project would look like, so there was no need to actually make it. The planning, organising, layout design was interesting and challenging. Taking the pictures to slot into the gaps in the design would have been boring. I had a shooting list that would have become a case of ticking off items as they were done.

Back to wandering around aimlessly snapping away for me. The funny thing is that somewhere in my disorganised mind I'm sure there is a master plan guiding me and one day all these random images will coalesce into a Great Big Project. All I have to do is hang on long enough to find out what that is!
Posted by Dave Lumb at 22:14