My lack of direction continues to afflict me.

My most creative picture taking seems to be occurring while I'm fishing. Messing about with my compact while the fish aren't biting. Or at least in terms of single images that's the case. Being by the water for twenty four hours lets you see many changes in light and atmosphere, and so provides many chances to make pictures.

The trouble is that I would prefer to be making bodies of work. Something Alec Soth said seemed pretty apposite to my situation:  “Everyone can take great pictures. What’s hard is taking a collection of great pictures and making them work together. It’s like language: everyone can speak but putting the words together is the real challenge.”

Words can be brought together in a number of ways. You can make lengthy prose works of fact or fiction, you can make haikus, and many variations in between.

I'm particularly taken with making grids at the moment. A sort of poetic approach, I suppose. One such which I made very quickly, again using my compact camera, came to me as I walked past a hedge which contained a variety of fruiting shrubs in close proximity.

I worked quickly, trying to remain instinctive, and arranged five pictures together. A lame attempt to convey an aspect of autumn. Individually the pictures are nothing special, but together I think they make a bit more sense.

There seems to be something about the compact camera that gives me ideas. I think it's the flexibility of it's screen that helps,and it's light weight that allows it to be held in positions which would be awkward to use a larger camera with a viewfinder. It's not without its drawbacks. I tried it for some pictures of a woman untying her dog outside a shop in town. The little dog was pleased to see her on her return and was running around and jumping up. The lag between pressing the shutter release and the exposure being made ensured I missed every picture I saw. I also got tutted at by a woman walking by. So I followed her and took a photo of the back of her head. Well it reminded me of a William Eggleston photograph. Somewhat tenuously, perhaps. 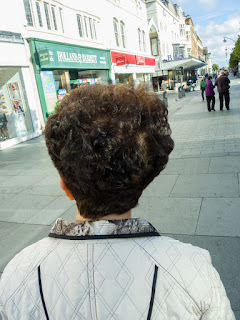 Wandering round town taking random shots of random people might pass for street photography these days. It's not all that difficult, not even to make a set of similar looking images. I could have spent a few hours taking pictures of people carrying shopping bags. But it could have been a bit like collecting those footballer cards. Which is what these '100 Strangers' projects that have become popular seem like to me. The first person to do it had an idea. Now there's a Flickr group for them.

However, if it were someone taking pictures of 100 cat owners, or 100 mobility scooter riders, I could see some point to such a project. This typology approach does give you a sense of the differences between a group of superficially similar people. It's not a fresh idea (Keith Arnatt's 'Walking the Dog' series is a favourite of mine) but there are many sub-groups of people for which such a project could be done.

Unfortunately I lack the people skills to get a project like that off the ground. Besides, it would be rather planned - which would be the kiss of death for me anyway.As it is I blunder along with vague projects in mind. Making random pictures to slot into folders on my computer to be sorted into some sort of order at some stage.

There's one of these vague themes I've been making pictures of for some years now. The other day I had a burst of inspiration and made some more. Back home I made a grid from nine of them and had a light-bulb moment. I thought I'd found my way in to get the project into shape. The following day I went out certain I could make nine more pictures for a second grid about another aspect of the theme. I was happy with the shots as I took them, and when I looked at them on the computer. The problem was that arranged as a grid, as I had planned them, they looked leaden, forced, obvious. It just didn't work. It's back to the random shooting of pictures when they present themselves for me.

With that in mind I have added poultry to my ever-growing list of themes (and corresponding Lightroom folders). And to contradict what I have just written about planning not working I took some pictures of a sign I drive past on a regular basis. Today I pulled over and got the camera out. A couple of chickens even got themselves in the frame for an added bonus. Quite where this theme will lead is anyone's guess. Most likely down another blind alley! 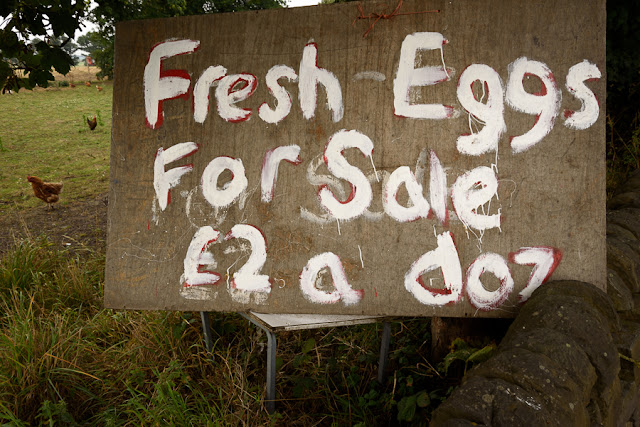