As I expected, my visit to another country show didn't add much to my poultry collection. I got hardly enough pictures to make it worth putting together a gallery. That's partly because I didn't take many in the first place. There seems little point in repeating myself 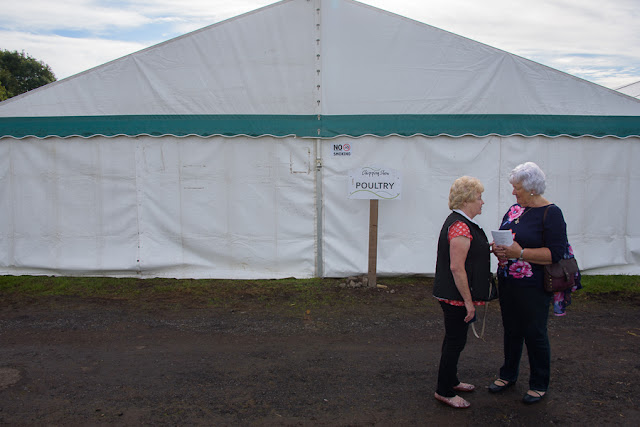 Even so, when the chance arises to make a better example of a picture I already have on file I'll give it a try. 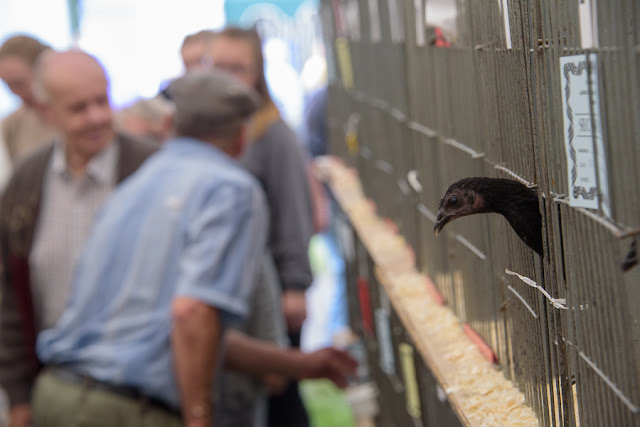 The odd new view did pop up, but I don't think I realised it until too late and didn't make the best of it. 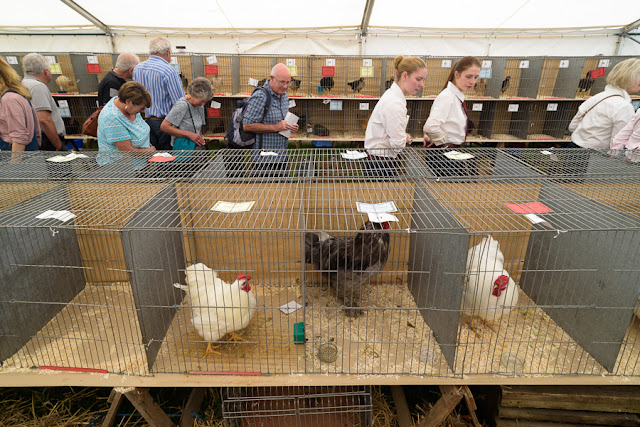 Then there's pictures that might come in useful at sometime depending how the project gets presented. 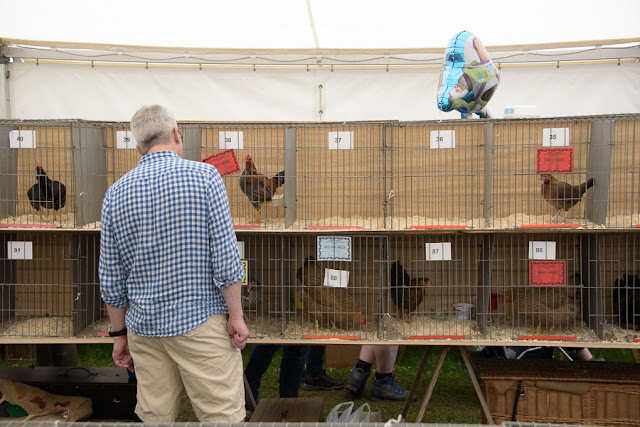 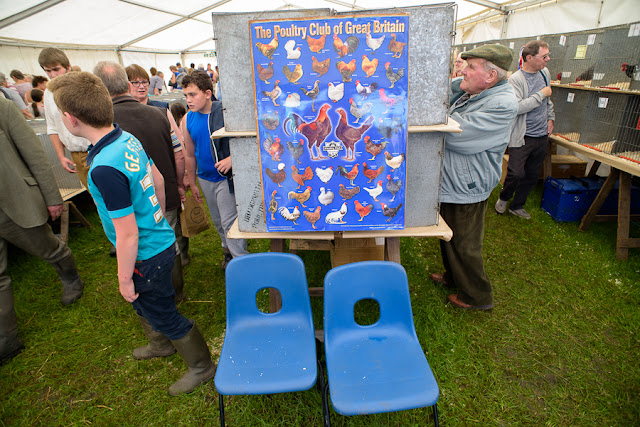 The show itself was busy, both with stuff going on and with visitors. To give an impression of how many people were there I did the news photographers Hail Mary - hold a wide angle lens up as high as possible, click the shutter a few times and pray! With a bit of practice (and a fair bit of luck) it works. It puts a different perspective on things too. 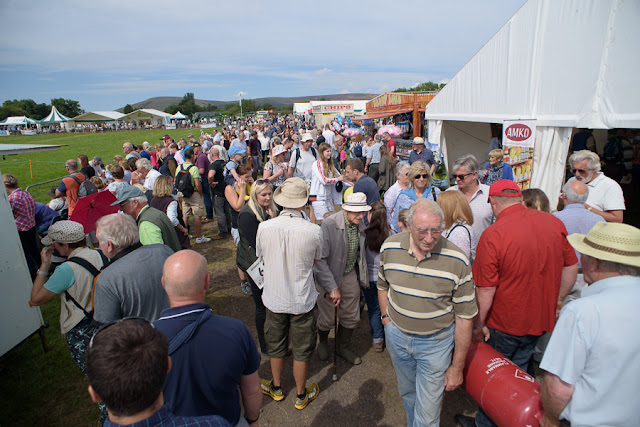 Another way using lenses to mess with perspective is to use a long focal length stopped down to give greater depth of focus. If you only ever shoot as wide open as possible you won't be able to make a tiny, tiny, man stand on a heifer's back! 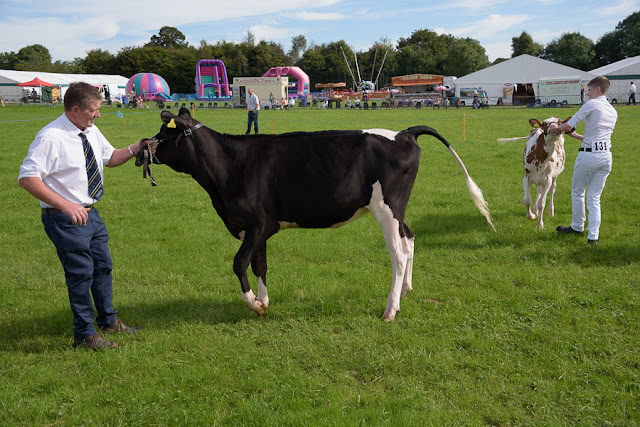 I'd like to say I planned that picture, but I didn't... I did plan the next one. Again a long focal length and controlled aperture were used to create an effect of forced perspective. Less extreme than before and intended to draw the Longridge Fell closer to make a flattened image. 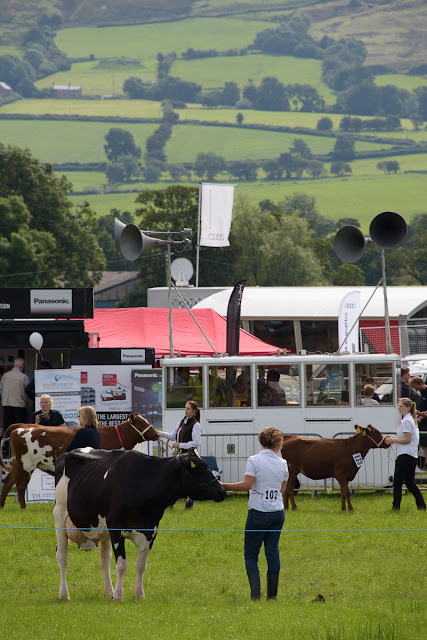 I slipped up with the next picture, another of my failed attempts at making a portrait of a proud Yorkeshireman of 87 years. Not only did I need some fill light (flash would have done but a reflector would have been more subtle) to lessen the shadow from the hat's brim, but I should have opened up the aperture to blur the background clutter more. 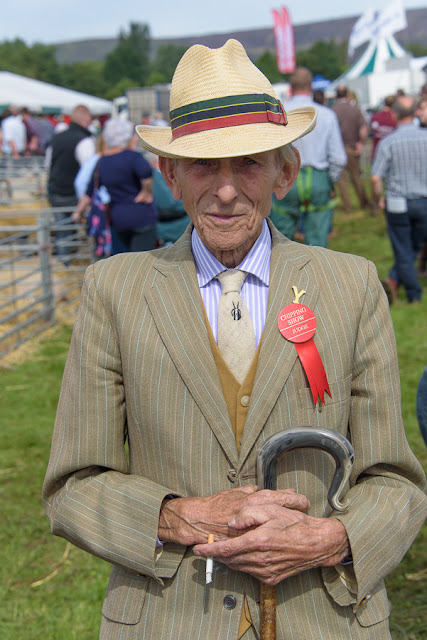 I managed to do the latter for the candid shot I'd taken earlier. I'll have to write out a hundred lines: Must pay more attention to my settings. Doing this sort of stuff week in week out, or more frequently, all these things would become second nature, I'm sure. 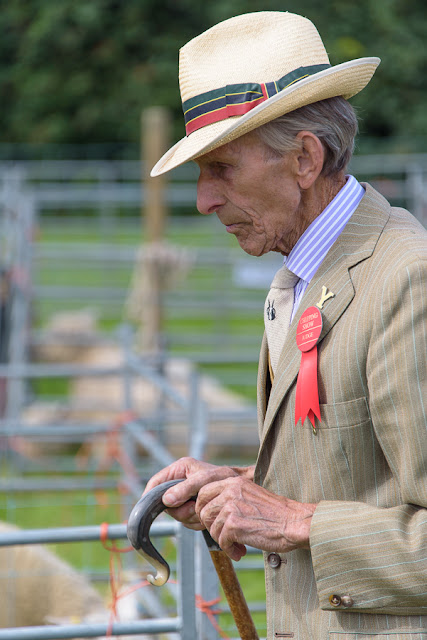 There'll be a gallery of more pictures from the show here - as soon as they decide to upload.

At the country show I attended today there were a couple of photographers working for the local press. Both were operating the same way: two bodies with a short zoom and flash on one and a long zoom on the other. Nice and simple, covers all bases indoors or out. If that's the set up they use all the time, literally day in day out, then they'll be totally familiar with it. As they should be to avoid the sort of cock-ups I make all the time!

What I wouldn't be able to bear if earning a living from taking photographs would be having to take the safe route. If you are working to a deadline then you have to get something quickly. And that is one difference between news photography and documentary work. Photojournalism has longer deadlines than news, but even that has a deadline. Long term documentary doesn't have to have a deadline at all. But as I've said often enough in the past, having no fixed end point to a project can lead to it dragging on forever without getting completed.

There was a lot going on at the show as far as animal judging was concerned. Kirkby Lonsdale being sheep country there were plenty of them and few cattle. There were also lots of horses. so much so that I got a bit distracted from the poultry because I like looking at new things. The ritualistic dressing of the heavy horses, plaiting stray in their manes and tails held my attention for some time.

Rather than post a few pictures I made two galleries of the day's efforts. They should both appear below, or click here and here to see them bigger.

As the summer got warmer so it seems my urge to take photos decreased again. I've had an occasional local walk with a camera but when it's sunny little ever seems to catch my eye. Or what does results in a clichéd 'summery' picture. Fields of barley. Yawn... 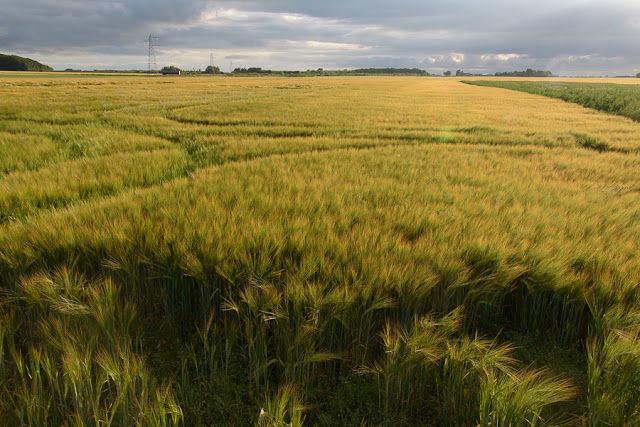 It was a relief to have a poultry auction to look forward to. Which must be why I got up before my alarm clock went off and arrived before most of the poultry people! This was a blessing in disguise as it meant I was able to get a few shots of people arriving with chickens in a variety of carriers, and I had the early morning sun (now a little lower than it would have been a month ago) slanting through the slots in the auction room wall. This made for some striking effects. Although I'm not sure they're too documentary and are possibly a bit too 'clever'. Still, it made a change. 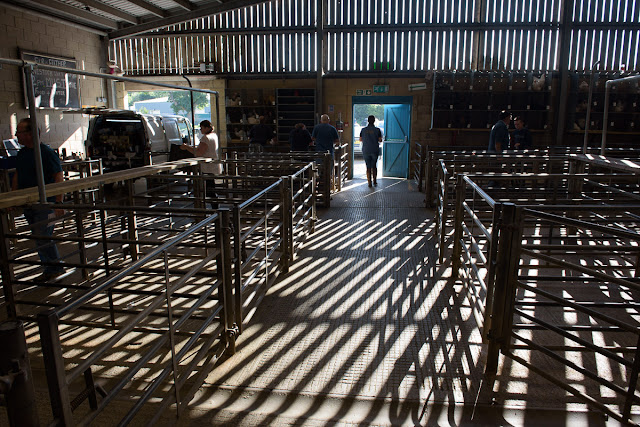 This is the quietest auction of the year so there weren't as many people about, and it was over before lunch. Once more I tried to get a few detail shots. I also broke out of my comfort zone and asked if I could make portraits of a few people. This went about as well as I expected it to. Badly, in as much as three people were averse to the idea and the others didn't turn out as I'd have liked. Stick to what you know is sage advice. 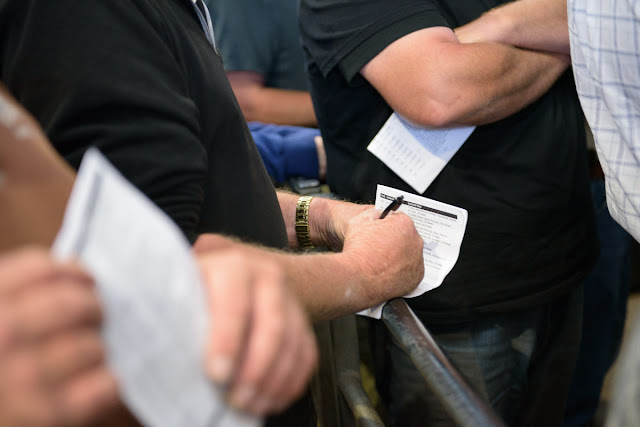 On a technical front I tried a different approach, using a mid range zoom instead of a selection of single focal length lenses on one body and my cheap and cheerful wide angle on the other. This seemed to work out well. It sure saved a bit of messing about. I still think that I see differently when using 'primes' than zooms. But in situations where space to move about is limited the flexible option is a good one.

Most of the people at these auctions are friendly as are the staff. So I was a bit surprised when a bloke asked me why I was photographing people and told me the office staff said I didn't have permission to take photographs. Most odd as I'd had a chat with the auctioneer when I arrived and with a couple of the other staff during the morning. I carried on regardless and will send some pics over to the auction house for their web use as usual. I wonder what he had to hide?

Once more there were plenty of 'characters' that a lot of amateur photographers would have snapped to make pointless, context-less, camera club photos. I settled for people watching and trying to make pictures that tell the story. Pictures which work best when presented as a set, as in the inevitable gallery where my failed portraits can be found.

On the way home I passed a couple of roadside egg sales which I hadn't seen before. The brakes were slammed on and some pictures taken. I managed to get a hen in one of them. 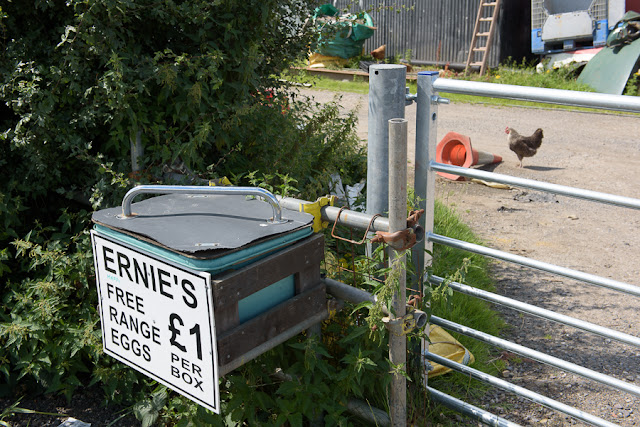 The Online Photographer posted a link to a short video by Jay Maisel (a rich and, apparently, famous photographer I'd never heard of until a year or two ago) who offers some sound advice. Not looking at photographs is counter-intuitive, and not wholly sound, but looking at paintings and other artworks really is sensible. Far too many hobbyists photographers only seem to look at the work of other hobbyist photographers, and know few of the influential photographers past or present. Well, not the ones I know about. That I'd never heard of Mr. Maisel is down to him being primarily a commercial photographer, and an American at that. The personal work of his I have seen is in the tradition of what I'd call slick photography. It looks kinda too perfect. Not the sort of stuff Winogrand would have produced. I can appreciate his eye, but it's a bit 'clever' for my liking. His photographs are not ones I'll be seeking out to look at in future!

But this raises an interesting aspect of the creative process. Just because you don't like someone's work doesn't mean you can't appreciate it for what it is, or that they can't have things to say which chime with your own approach. That's not surprising because aspects of the creative process are often very similar for everyone, but their personalities and backgrounds make for different outcomes. Which is where a personal style comes from.