I suppose the difference between a snapshot and a photograph is the amount of care taken over the framing, which can be subtle and sometimes done almost unconsciously. Even without chimping I knew the first shot here wasn't right so got just a little lower and made another frame. It was only on the computer that I realised what the differences were. I had consciously ensured that the top of the central barrier didn't cut through the tree line. Unconsciously I had raised the kerb in the frame which gives a better balance to the overall image. 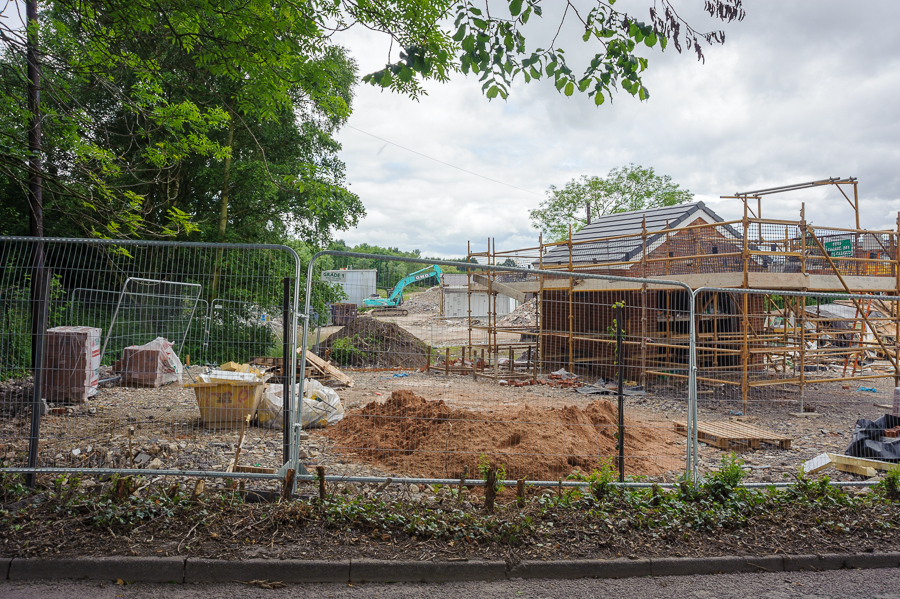 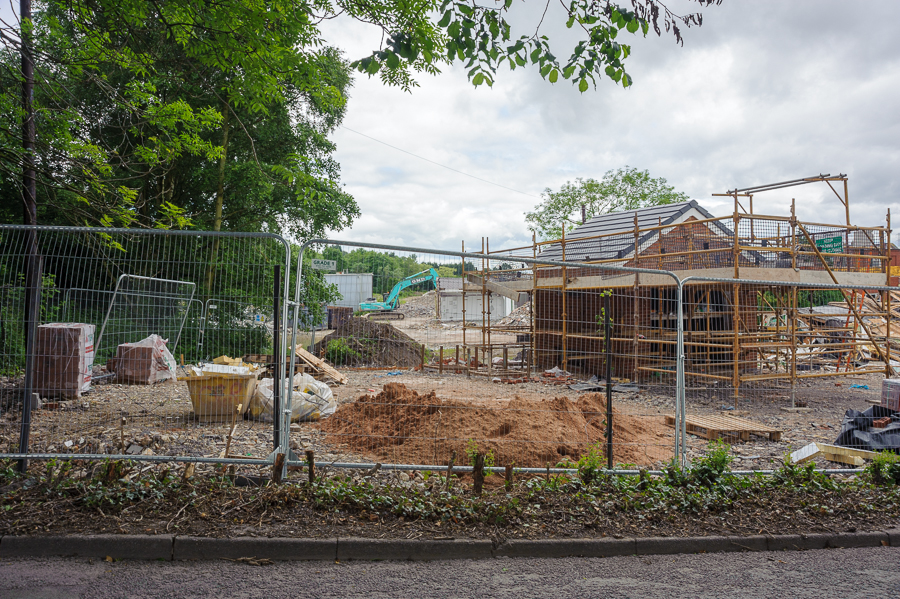 Why I go to those lengths for what isn't much of a picture, and which didn't change the information in any way, I don't know. I just can't help myself, and it probably explains why I get niggled by small things in some of my pictures.

A combination of test match cricket and hot weather has restricted my camera outings of late, and once more I have been frustrated by making the same kind of pictures I always do. It seems like I just can't get away from making images which could have verticals and horizontals drawn over them as if Mondrian was guiding me. It's as if I see grid patterns all over the place and have to record them. What some might welcome as a style I find to be a major frustration. 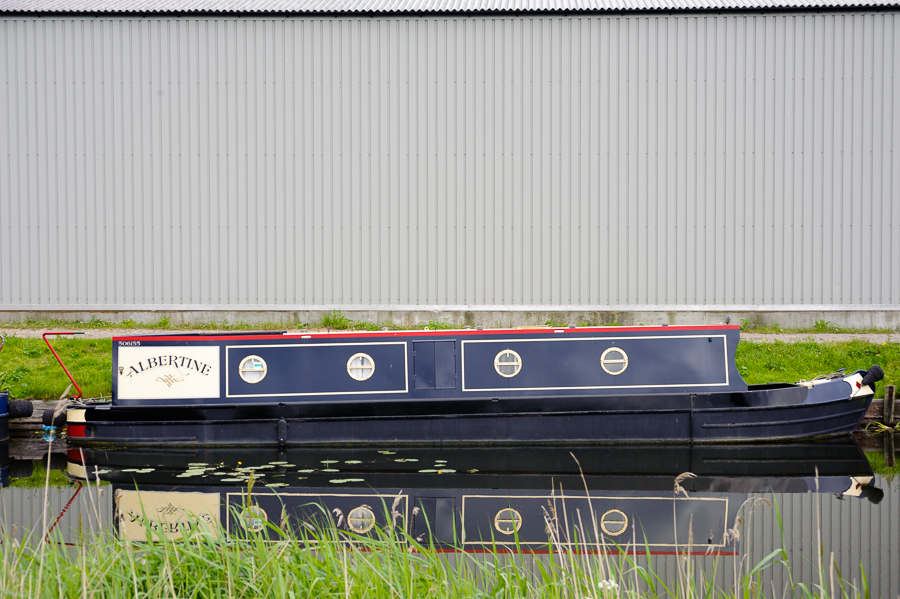 Even pictures which aren't made up of hard-edged shapes I manage to make fit a grid-like pattern. 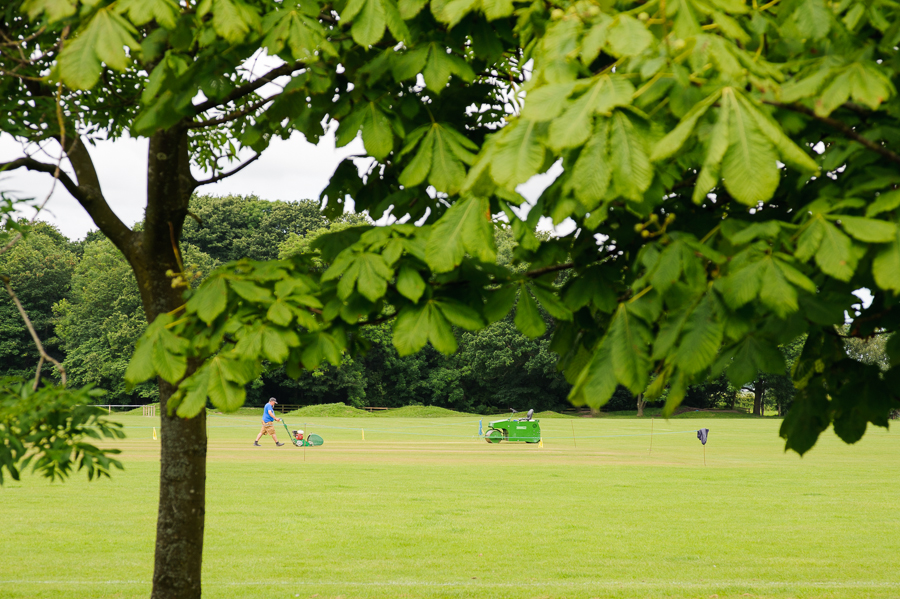 For some time I've been taking deliberately boring pictures around the village I live in without having an aim in mind. In one of my periods of boredom I started playing around in Lightroom and gave one a faux-vintage appearance.

This had an unexpected consequence in that for some reason it made me look at the picture in a different way to the full colour, detailed original. As if it added a layer of distance between the picture and the subject.

Then I started to get 'art studenty' and thought about the ironic possibilities of making a series of such pictures, containing obviously modern artefacts, as a pastiche on the display of old photographs in homes as nostalgic decoration. not to mention having a bit of a dig at 'art photographers' who choose to use archaic photographic processes such as tintype to make pictures of contemporary subjects because (even if they deny it) the difficult to use medium, and hard to learn craft skills required, add extra 'value' to their pictures - as if a crap tintype is somehow better than a crap digital photo of exactly the same subject.

With all that in mind I conceived of making a set of ten faux vintage prints to be framed in faux vintage frames. There are plenty of suitable subjects around the village. Signifiers of 21st century life are not hard to find - LED street lights, wheelie bins, motor cars.  began making pictures especially for what could be a nice little project. 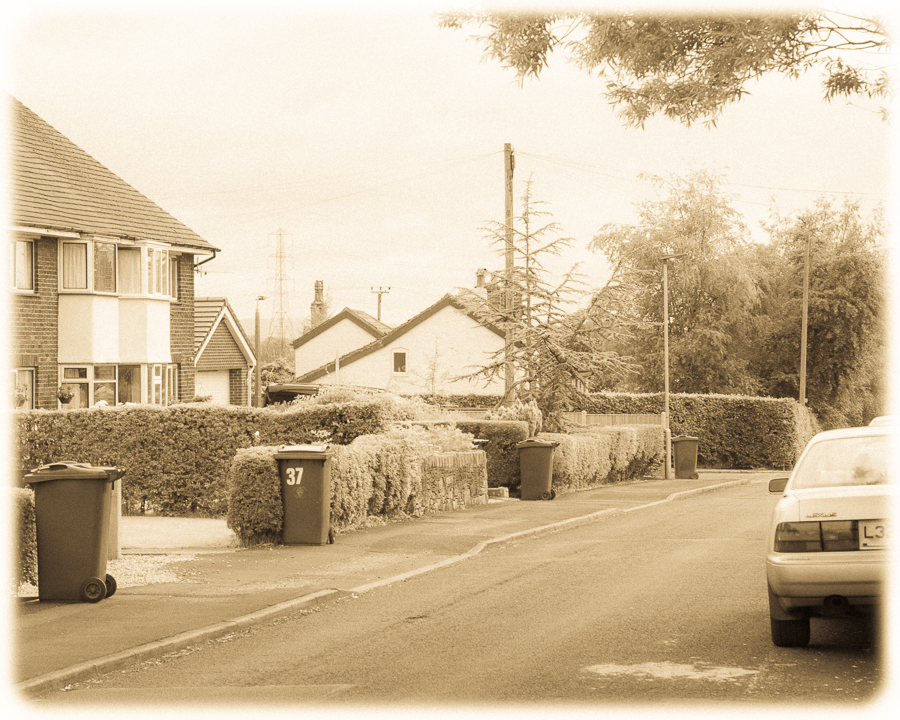 Then the embarrassment factor kicked in. I can just imagine the kind of pretentious drivel a student would write to accompany (justify) a project like this. I've already written some of it above... Project abandoned!

The strange thing is, however, that the pictures do work better in faded monochrome than they do in colour. Maybe that's because I've conceived them to be displayed that way and composed them accordingly on a tonal basis. But look at the shot above and even that one, with a fairly strong diagonal, is composed around a series of vertical lines and a couple running horizontally. I just can't get away from grids.

Although one project has been ditched I have decided to make a more concerted effort at photographing the village, in colour. I need to find a 'way in' though. An approach such as you might find in the Lancashire Life magazine holds no intellectual appeal for me. I don't want to make pretty pictures.

It must be the horribly warm and sunny weather that's done it, but I've been feeling lethargic of late. I've had no motivation for taking photographs, blogging, fishing or anything else for a couple of weeks. Not even when my foot improved. I've also had the problem of too many options - both piscatorial and photographic. That might seem like an odd problem to have, but what it means is that my indecisive nature prevents me setting my mind to any one of them!

After a couple of disappointing fishing sessions boredom overcame me on Thursday evening I popped out to try and make some serious pictures for my deserted car park series at the closed down restaurant/pub. The bright sunshine didn't inspire me, and cast my shadow into the frame too often thwarting some of my pre visualised pictures. That'll teach me to set out with specific images in mind... I got one shot I sort of liked, even if the blue sky is too cheerful. 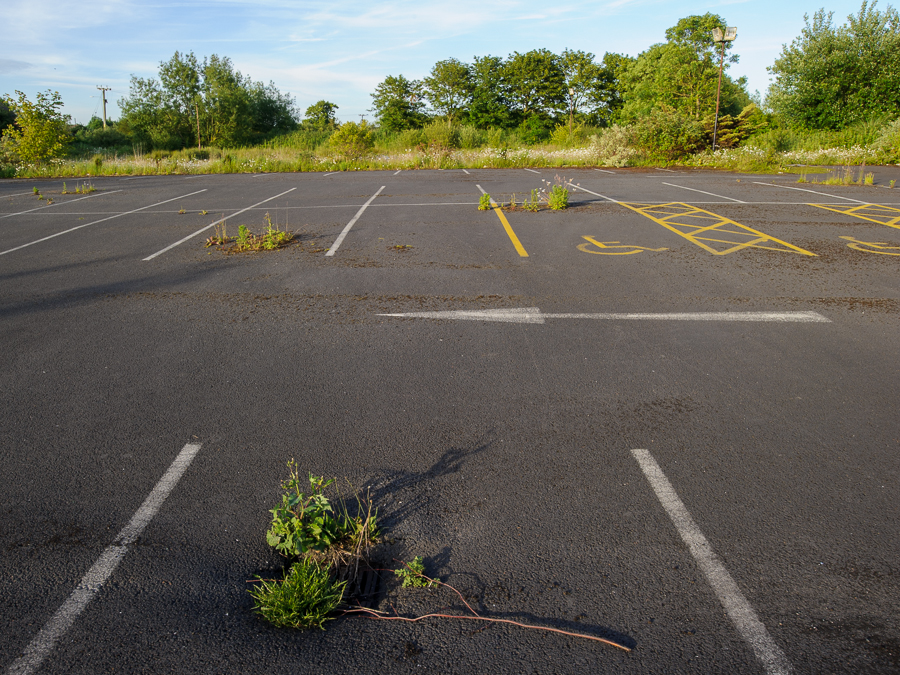 I was bored again on Saturday morning so I grabbed a camera and went for a walk with no ideas at all. Down by the canal the clearance of the old mill was progressing and I made some more pictures to document the change. Being restricted to shooting over, or through, the fence is a bit limiting. 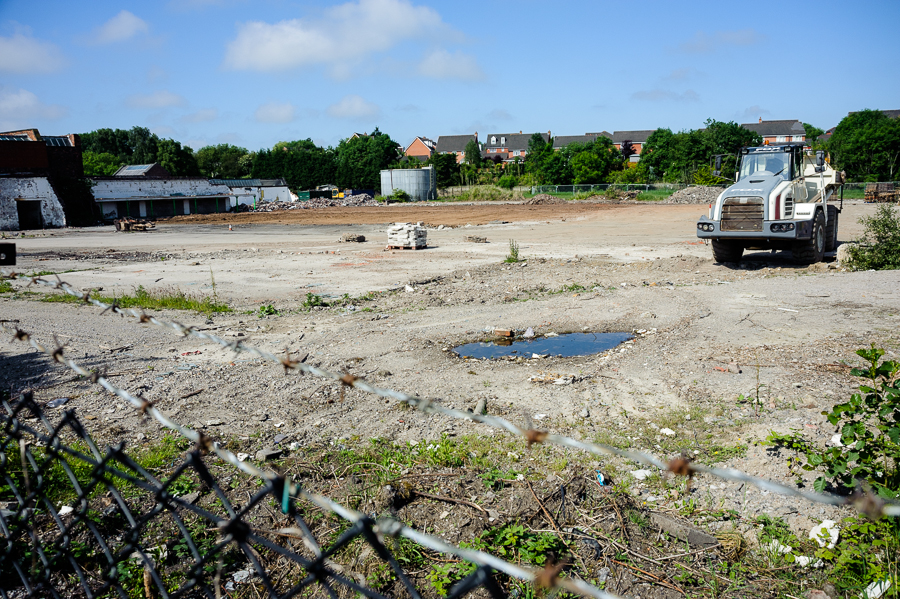 It seems to be the done thing to make black and white conversions when depicting scenes of industrial decay. So I gave it a try. 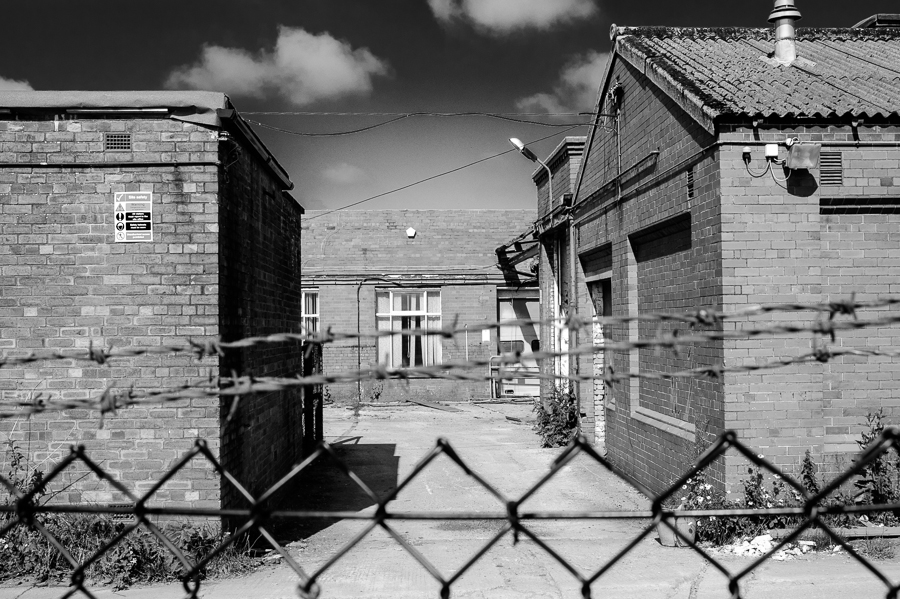 The temptation with processing software is to give pictures impact and drama by increasing contrast. I deliberately overdid the sky in the shot above. For some reason the modern trend is to darken the blues to make the clouds stand out. Yet that's not the way we see things. The tone of sky and clouds is actually much closer than we imagine. Compare the brightness of the sky with the brightness of the lit walls in the colour version below to see what I mean. The tone of the sky in the black and white version is closer to the tone of the shaded walls in the colour picture. 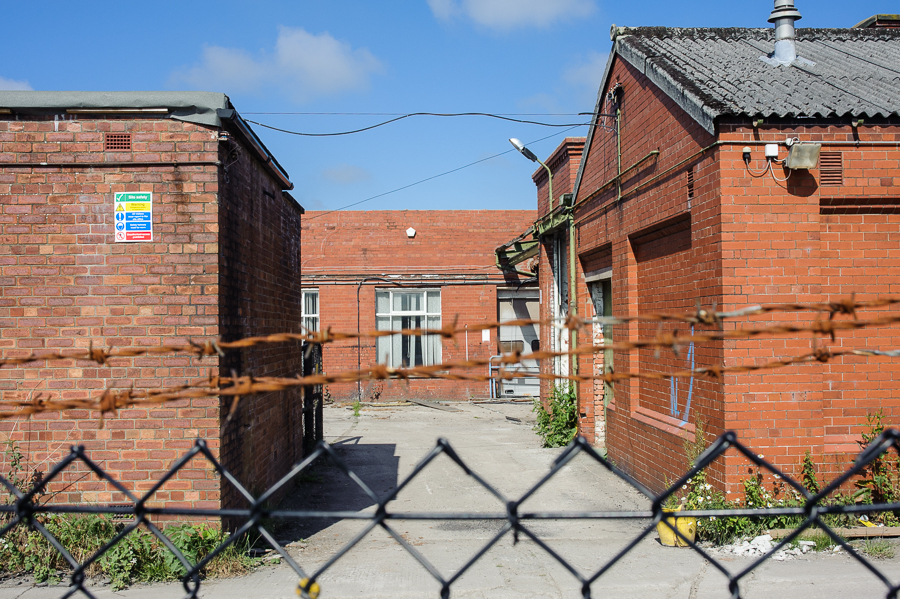 In a similar way polarising filters frequently get used to darken skies, with similarly obvious results. I rarely drag my polariser out, but when I do i always notice the effect it has on taking the shine off vegetation. If I could remember this in advance I might use it more.

For some years I have thought about taking my camera out on the village's walking day, but something has always stopped me. I think partly it's because I knew there wouldn't be much that could be done beyond the usual snapshots people take. There's not much to be seen, really, and the angles available are limited. Still being bored on Saturday afternoon, and with the Test Match in a prolonged period of tedium, I dragged my camera out nontheless.

As I expected the procession itself was lacking in much visual interest and the onlookers were the more interesting subjects. 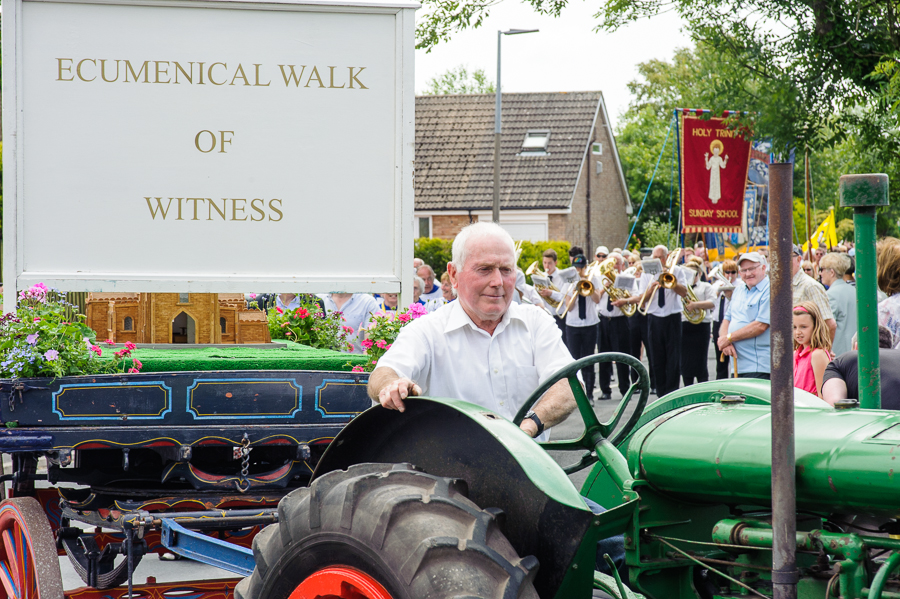 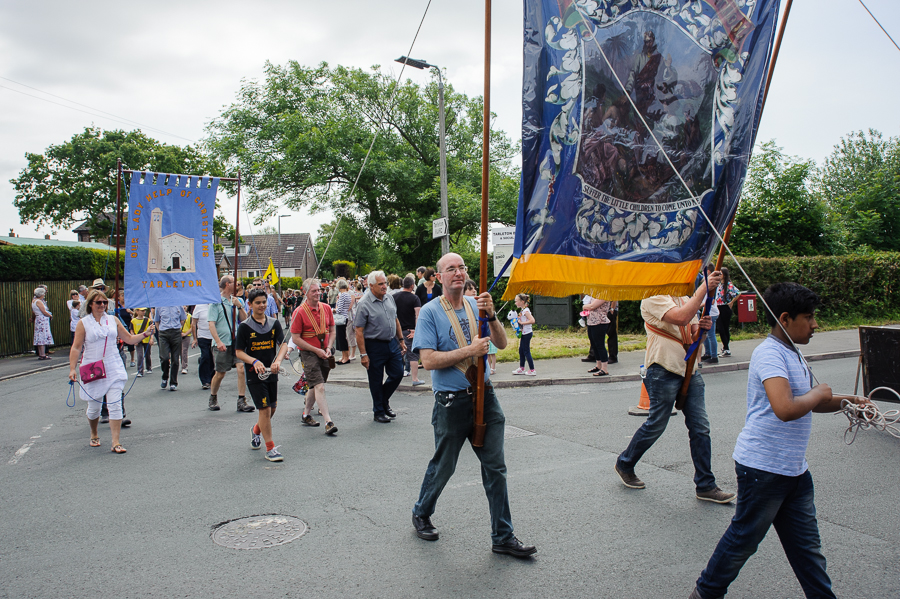 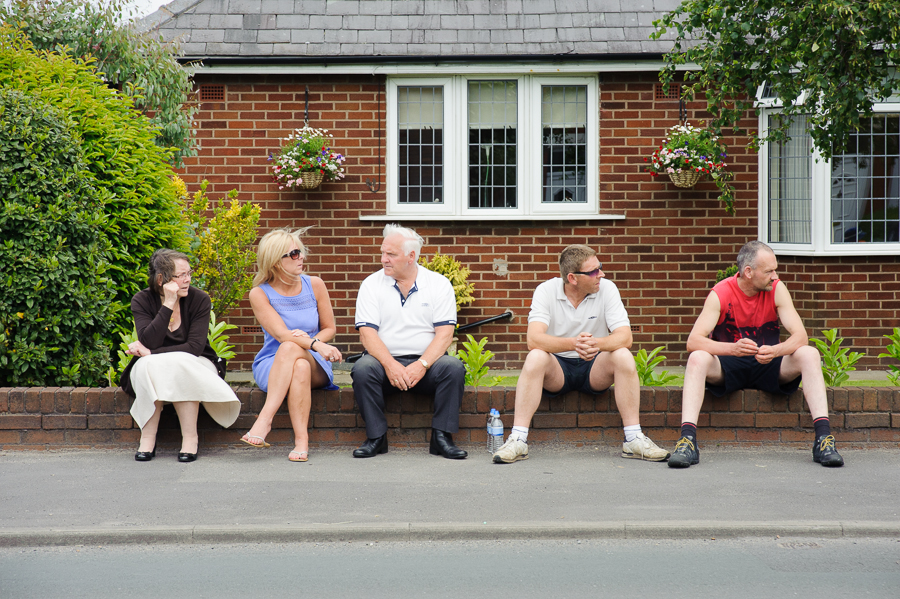 I took well over 100 shots and only a couple or three were close to decent pictures. Maybe I ought to have taken more? What was obvious was that I was out of practice and it was only towards the end of the procession, which I followed around rather than sitting in one spot waiting for it to pass by, that I began to start seeing pictures. By which time it was too late.

If one was to set out to document an event such as this, and make interesting pictures, I think the way to do it would be to photograph the preparations and work out from that.

Part way along the route I took a short cut up a footpath alongside some greenhouses to get ahead of the procession. I got distracted, first by a lost ball in a ditch and then by a view through the side of glasshouse - which provided my favourite shot of the afternoon. 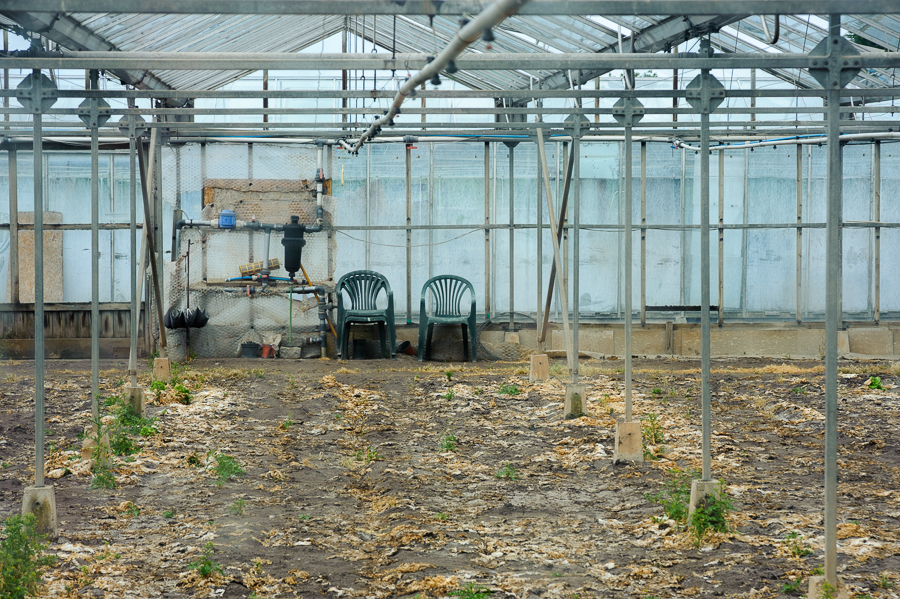 It's odd, but I don't think I could improve the framing of this picture. Odd because it's the only shot I took. It probably worked out like that because I wasn't thinking.