The fishing bug continues to bite, but it doesn't bite too hard on Saturdays which is good for attending local events. last weekend I gave the village walking day a miss. Partly because I had work to do but mostly because it was raining heavily. It wasn't my camera I wanted to keep dry, it was me! Yesterday, however, the sun shone intermittently on the Rose Queen day.

There isn't much goes on at the Rose Queen event, and there seemed to be less to see and do than last year for some reason. However the poultry and pigeon exhibition was there again, and just as popular as last time. Kids love ducklings and chicks, and being allowed to stroke the star of the show - a well behaved Pekin bantam. 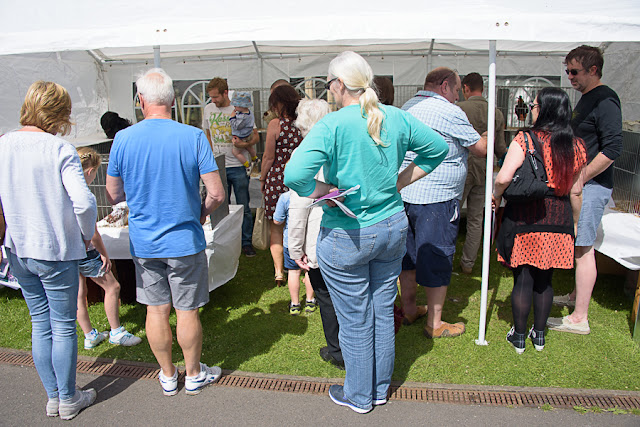 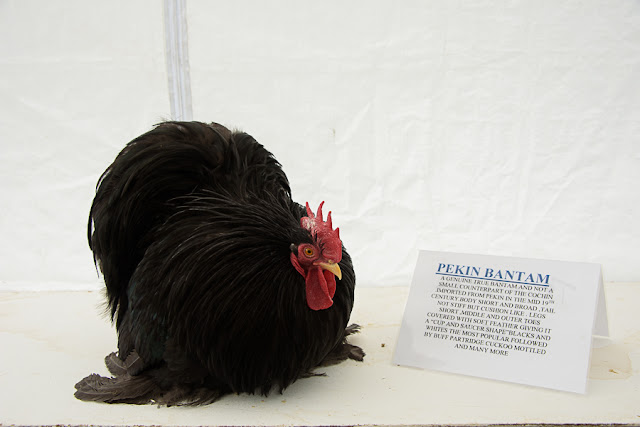 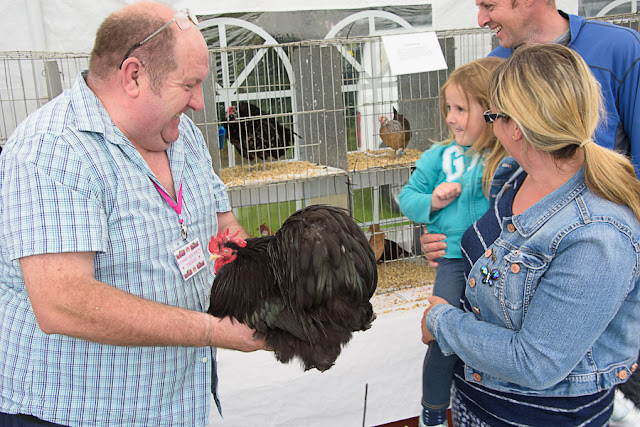 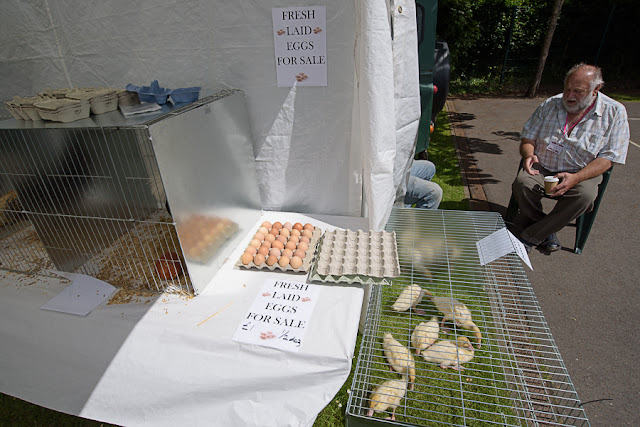 There was plenty of burger eating and other Martin Parr style subjects, which I mostly avoided. There weren't many dogs in evidence. Which was a pity. 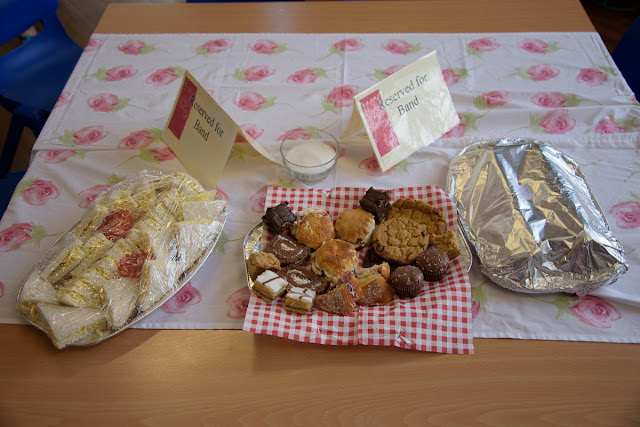 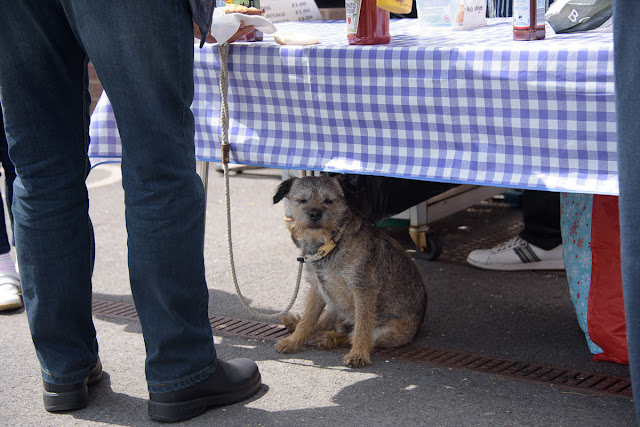 As you'd expect there was plenty of photography, and videography, going on. As you'd also expect most of it was mobile or tablet based. 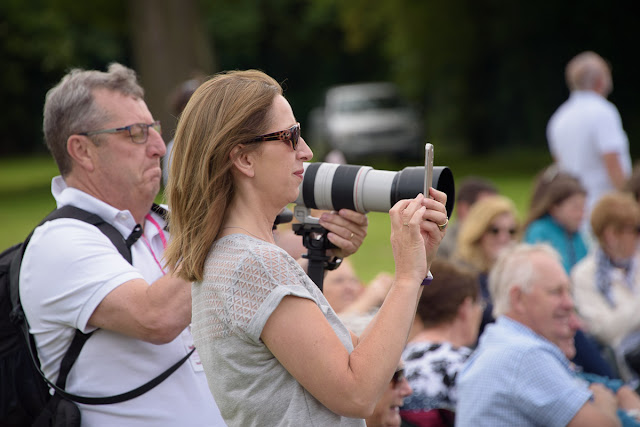 Either I wasn't in the mood or I just couldn't find enough to photograph without repeating what I did last year, but there wasn't really sufficient pictures to warrant a gallery this time. 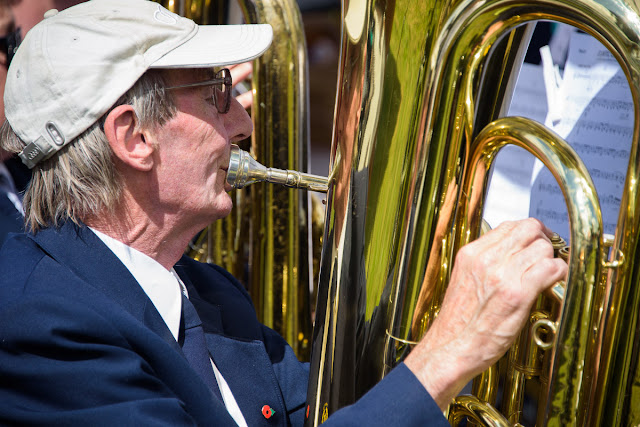 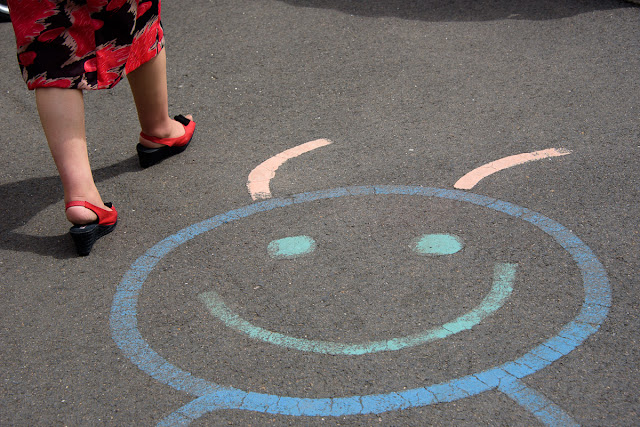 Repeating yourself is a big problem with visiting the same places and events. Of course it doesn't bother the aforementioned Martin Parr. He compiles his collections of similar pictures of similar subjects into books. That's fair enough, typologies have their place and value, but is somewhat dissatisfying for this viewer.

Finding new subjects or ways of picturing old ones is a growing difficulty for me at poultry shows. There's always the quest for a better example of a particular picture, but I seem to need novelty to keep me interested. Visiting the bantam club's evening box show a couple of hours after leaving the Rose Queen event was new for me. That had the drawback of not knowing what to expect. Catch 22!

Unlike the usual shows a box show sees exhibitors turning up with their birds in boxes as usual, but to be penned in rotation as the various classes are announced for judging. After the awards are made for each class the birds are put back in their boxes. A far less formal arrangement. 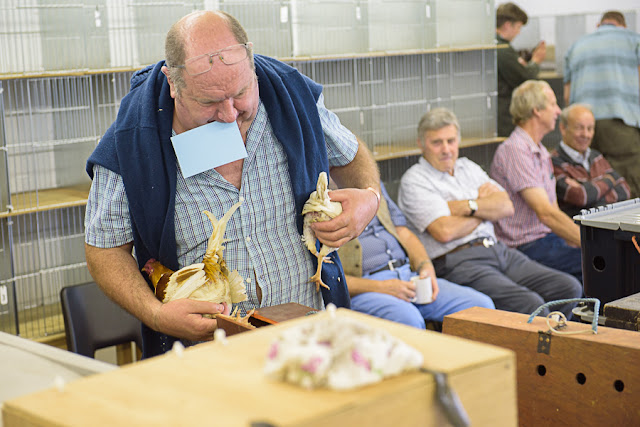 Regardless of the informality the judging is still exacting and  'post match' analysis is still carried out. 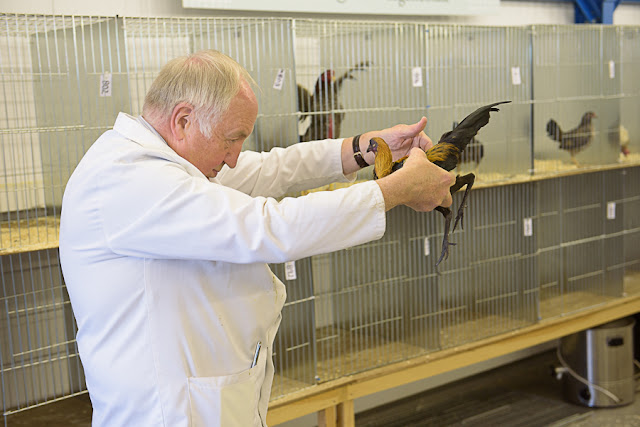 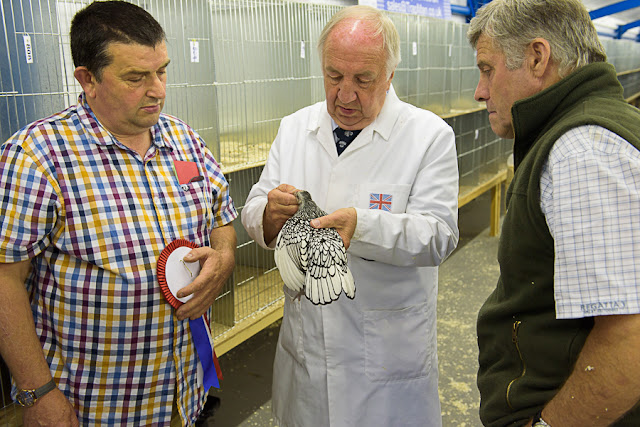 The light levels and quality in the show venues continues to frustrate. I need a slow enough shutter speed to overcome the cycling of the fluorescent lights, but a fast enough one to freeze the action of the fidgety birds - and to overcome camera movement with longer focal lengths. There's no happy medium though. Using flash would solve the problem, but likely give the pictures a journalistic look I don't want. I guess switching to black and white would solve the colour problem, but colour is quite a part of this subject matter. Besides, black and white would run the risk of giving the whole project a nostalgic feel. lets give it a try. 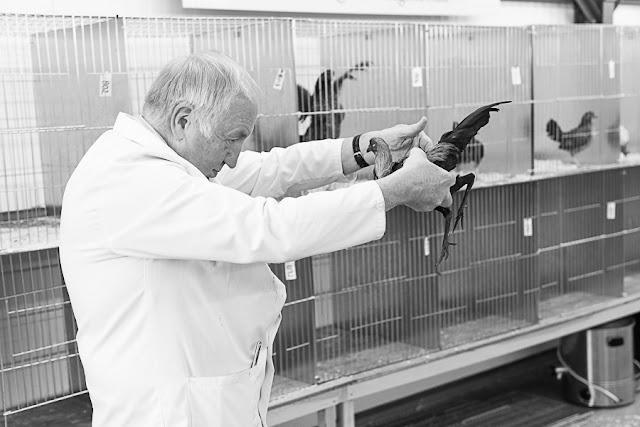 Country and agricultural show season is in full swing now, so I might take myself off to one or two of those over the coming weeks to keep the poultry pictures coming. Alternatively I could dive into the tackle shop project. Or not!

With a lot of time to kill last Friday I took a camera for a walk - mostly in the rain as it turned out.Try as I might I just couldn't get into the swing of photography. That was probably because of the radio jammed to my ear providing Test Match commentary...

While wandering around  a wood I did get sort of inclined to take some pictures and maybe return at a later date to make more in a similar vein to the ones I made for my Out of Stone project. But as my wanderings progressed my ides shifted. In places it looks undisturbed, wild and completely natural, despite a sign outlining the history of the place as a quarry and it's replanting around a hundred years ago. 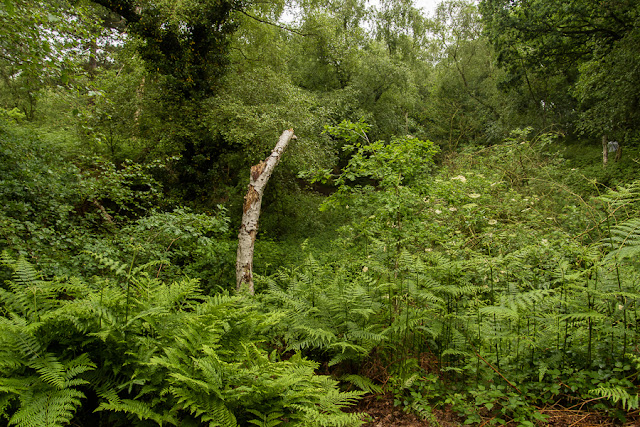 Another sign has icons showing the various prohibited activities, which it was obvious are ignored. Although maintained as a public amenity, and kept tidy, there were traces of unsanctioned human activity all around. These traces were what I found most interesting. So much for thinking about the place in terms of traditional  landscape pictures. If I was going to make pictures in the wood they'd be looking at the ways people leave their mark on the place. Both from the management of the environment and the impacts from the public. 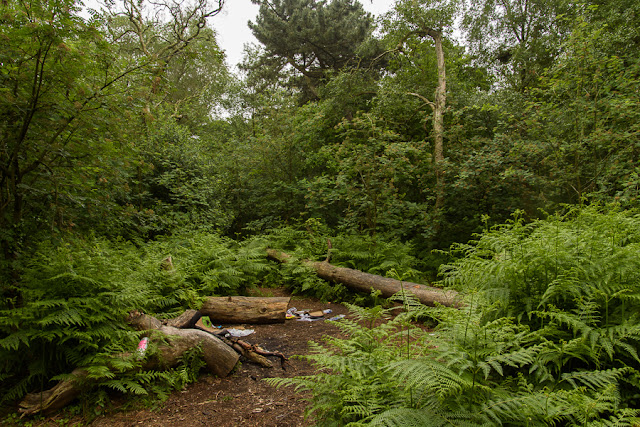 The road back from the wood to 'civilisation' is a fascinating location that would provide plenty of material for the theme of privacy and paranoia that I have on a slow burner. Electrically controlled gates, keep out signs. It has it all. If the rain hadn't been falling I would have taken more photographs there. I loved the way someone felt that two keep out signs were required in the scene below! Maybe I will return... 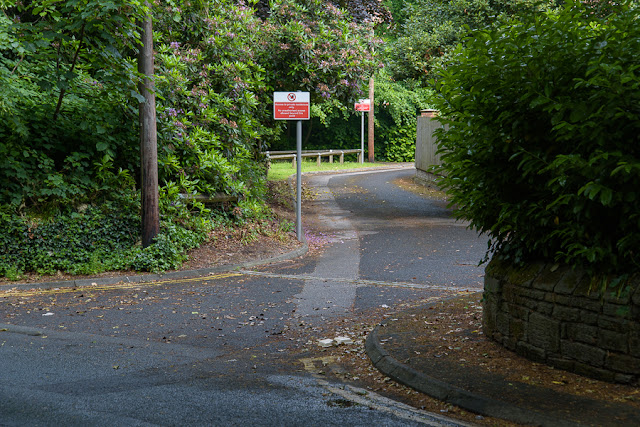 These pictures are about as close as I get to landscape photographs. I never feel that showing a pleasant scene is enough. I always get the urge to make some kind of, often obscure, comment. Except when I'm fishing when the sun setting seems to say plenty about the sense of place and time of day. 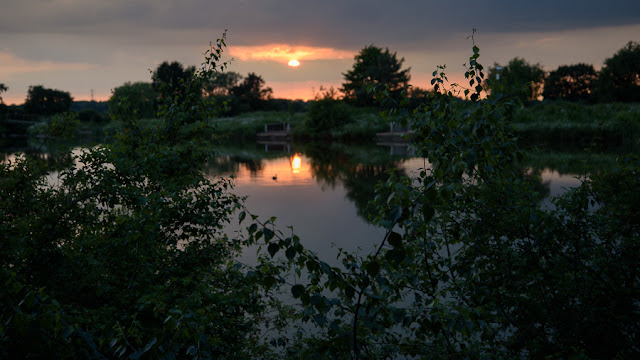 The end is nigh

I hadn't been past the sandplant for a few weeks until today. Even from afar it was plain to see that there had been big changes. The profile had changed. The big piles of sand were gone. I returned this evening trying to do the impossible - photograph that which is no longer present. If I was organised, or a control freak, I'd have made some prints of how things were before and gone to replicate the viewpoints to show thechange. I'm not wired that way. So I didn't! 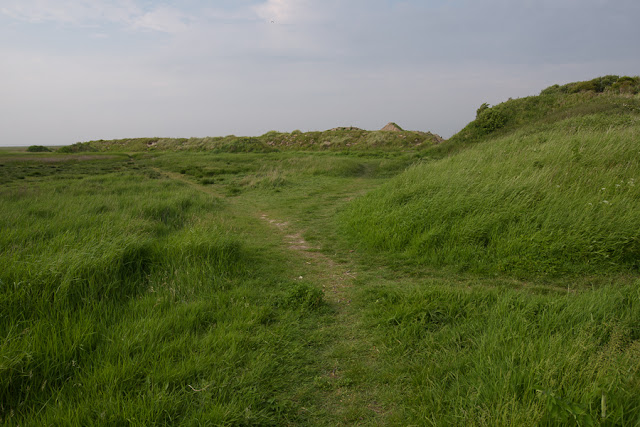 The light was flat, which in a way was good as a low evening sun tends to get in the frame, but it did make emphasising patterns in the sand problematic.  Although the place is now almost levelled off it retains much of its strangeness to my eyes. The lack of features to provide scale trick me into imagining I'm seeing a desert or moonscape on a grand scale. 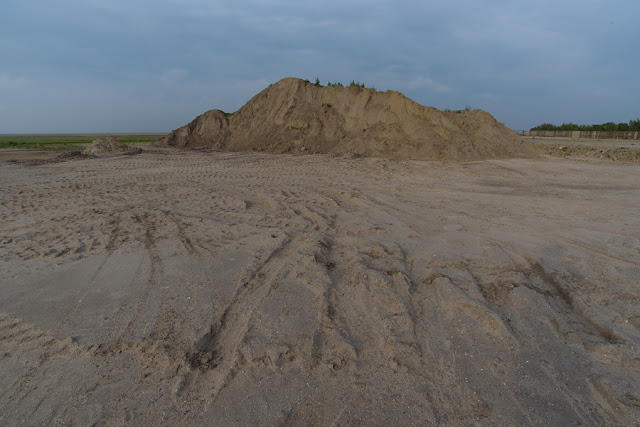 It's almost apocalyptic. Until you come across half-burried detritus or a flowering plant. 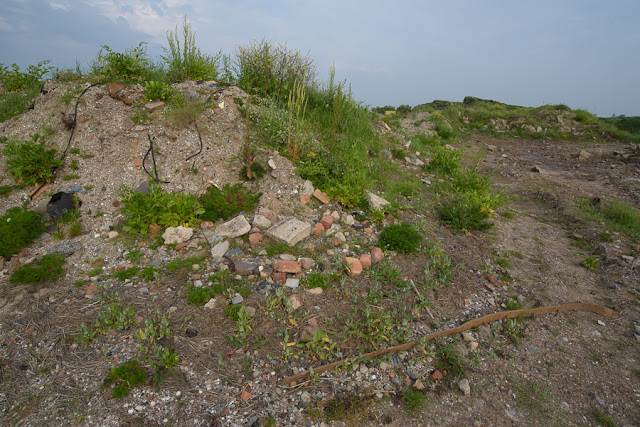 This must be nearing the final stages. What is to come once all the sand piles are gone remains to be seen. I have my doubts that whatever it is will be as varied, changeable and interesting as what has been removed. 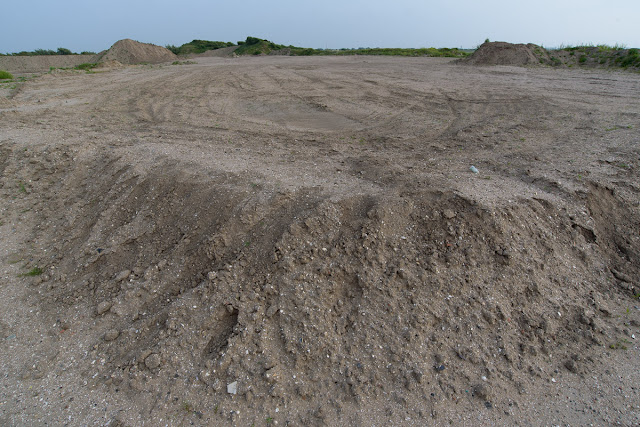 The fishing fever has still been upon me of late while the heatwave has continued, so that's mostly what I've been using my cameras to photograph. Nothing really serious has even been considered until I remembered a poultry auction right at the last minute. All the fishing induced sleep deprivation meant I was a bit tired and unenthusiastic, and so not expecting to make many decent pictures. I must have been dopey because I got lost despite knowing the way to the auction mart! This time of year isn't peak season for selling chickens. As a consequence there weren't too many lots nor many buyers and sellers. 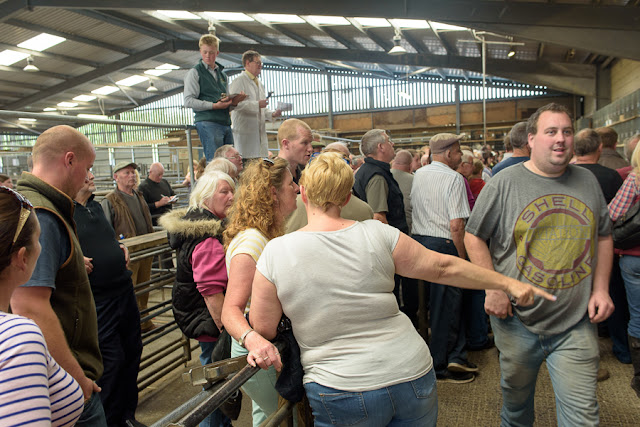 Although I continued to take some of the same sorts of shots in the continual search for 'the' shot, I thought I'd try to find some details to concentrate on. Little things all add to the overall flavour when included in a project. They don't have to be printed large either to serve as punctuation points. 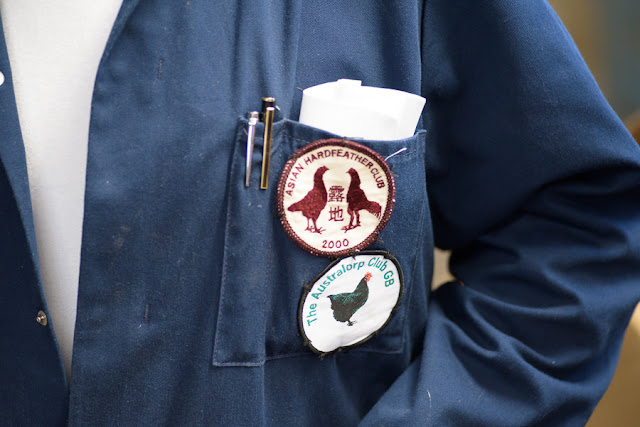 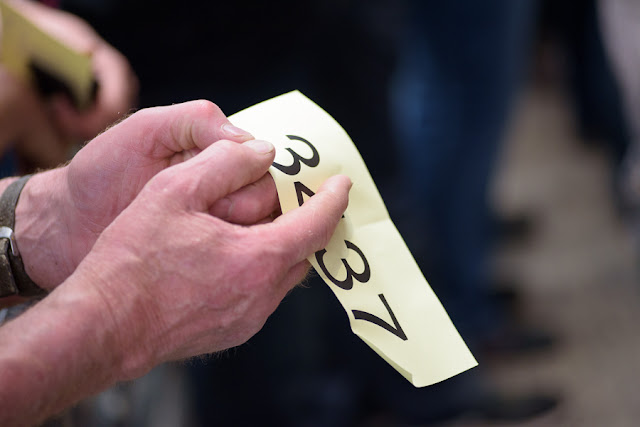 Something I kept on trying to capture was the studying of the auction catalogue. But despite trying many different approaches I couldn't find one that satisfied me. That's something I can add to the list of subjects to keep searching for 'the' shot. 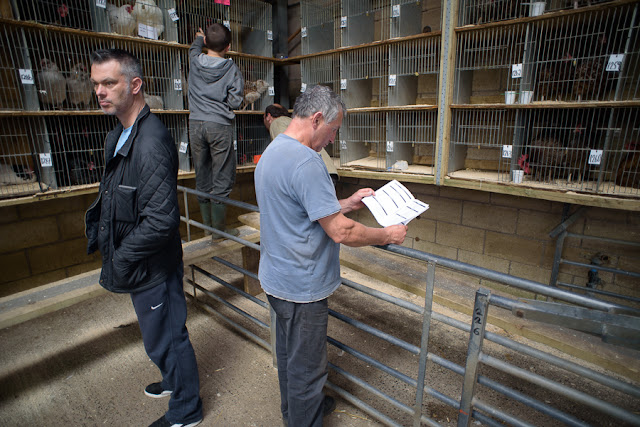 One good thing with there being fewer people around was that it wasn't as hectic when it came time for them to collect their birds and struggle putting them in carrying boxes - of many descriptions. This gave me an opportunity to make a few shots of something with action and/or humour to it. 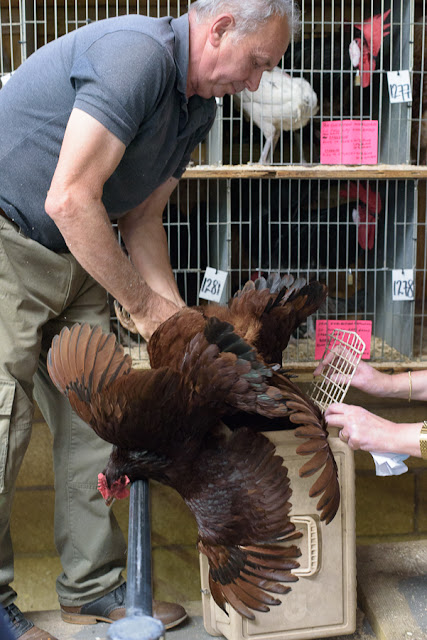 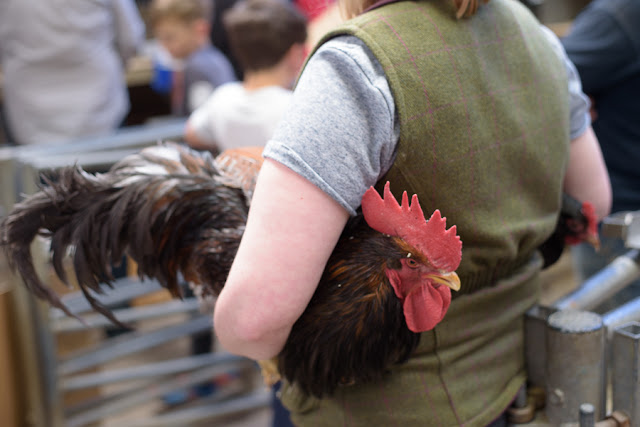 Talking of humour, mine can tend towards the childish variety. Which probably explains why I think I might have got the perfect back cover picture should this project ever become a book! Extended gallery here. 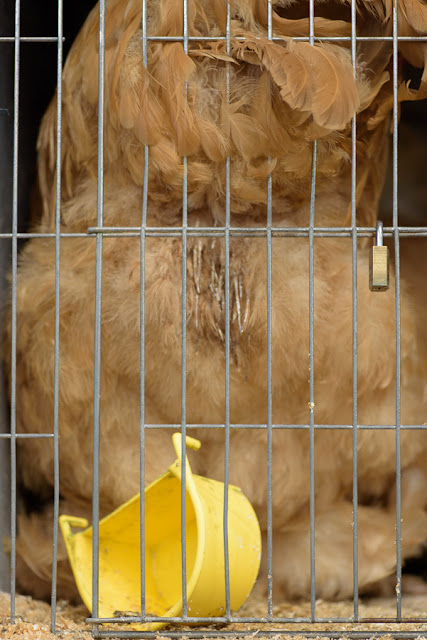 On the technical front my bad habits manifested themselves as usual. Using too slow a shutter speed being the most prevalent. My cheap old ultra-wide lens proved to be useful, and ultra-wide enough for me. Time to chop in some lenses and replace that one with the newer version, perhaps?  I must get my arse into gear on that score and rationalise my gear.