The gift that keeps on giving

Not having been to the sandplant for a few weeks but having driven past it I thought an evening visit might be in order. What a difference low evening light and blue skies makes! I like dull overcast days well enough, but raking light brings out texture far better, which can be important for some pictures. Bright sunshine also makes colours more vibrant. Something that no amount of computer trickery can manage if the light was dull in the first place. Different light gives different ambience to pictures, as does it's direction. All of which makes me thing about different pictures from the same subject, and given the changing nature of the sandplant there are always new photographs to be made.

This picture wouldn't have worked had the sky been overcast and the light flat as it's all about the colour and the cloud seemingly hanging over the skip. 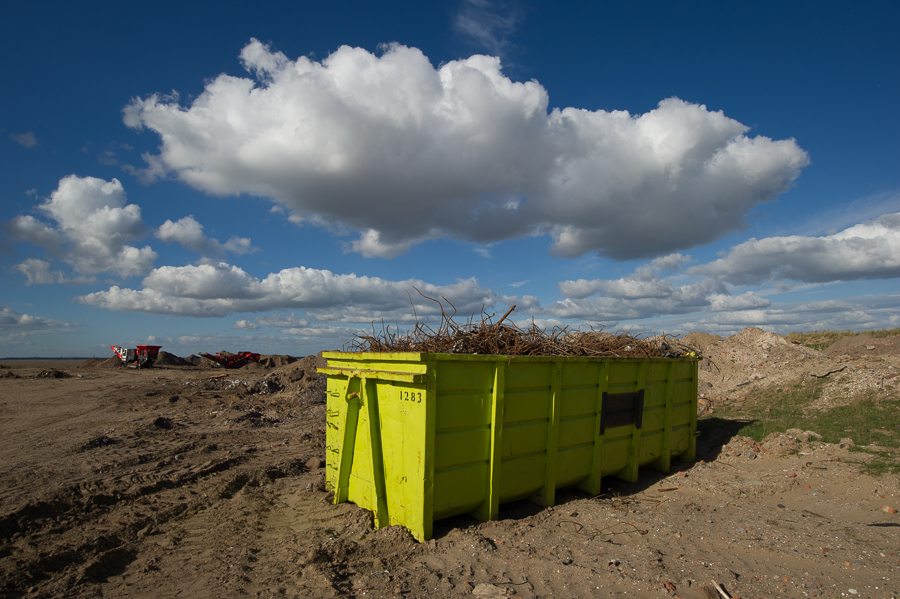 It's a funny thing, but I find if I am using a zoom lens it usually gets used at the two extremes. rather defeating the purpose of the thing! At least when using two zooms that gives me four focal length choices. A good enough reason to have lenses that don't do what most amateurs want them to do - cover a continuous range of focal lengths. I know it's often mentioned that single focal length lenses make you think about your pictures and that zooms make you lazy. It's often said because it's true. When you have to use your feet to frame shots you tend not to just walk forwards or backwards, you also move left and right, and even up and down to get the framing you want.

While the first picture was shot very wide with the sun to my side, the next one was shot long and into the light. There's compression and shallow depth of field to provide isolation, and the quality of light adds a different feel. Most photographers would have preferred a gorgeous blonde as their subject rather than the bucket off a digger. But that's so clichéd! 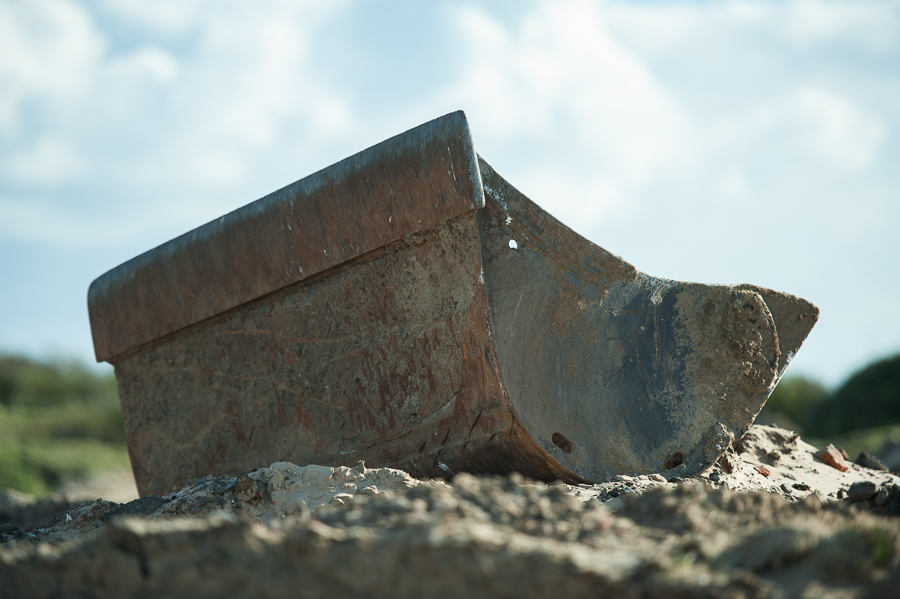 The place has changed dramatically. The outer bunds are disappearing fast, but the rabbits are clinging on. The interior space is getting flattened and the concrete is almost all broken down now. This time next year it will be unrecognisable to what it was twelve months ago. The next picture is a very boring one, but to me it has a symbolic significance. The grass on the right is original saltmarsh, the track-marked sand to the left is reworked land. If all goes to the plan I have heard I expect it will eventually all look the same. I expect that there will remain traces of what went before under the returned saltmarsh as I cannot see every scrap of rubber, plastic or iron being removed from the site. 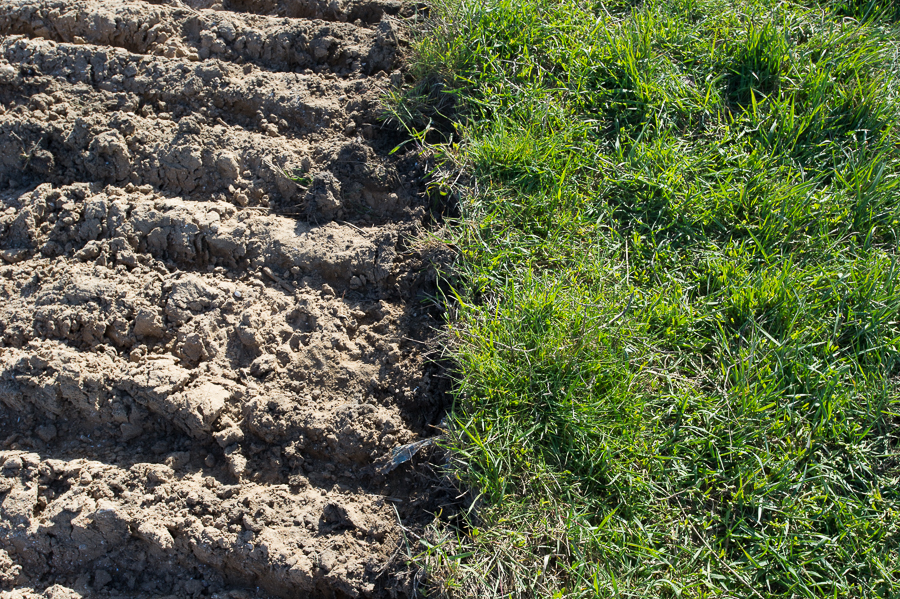 As ever after a trip to the sandplant there's a gallery/slideshow of today's pictures to be found here.

I suppose I could pretend that one inspiration behind this project is Hokusai's 36 views of Mount Fuji - but it isn't. It's just a daft idea that grew out of finding the local church hiding in a few of my pictures, then thinking that I could make a series as a pastiche of the kind of sets of postcards or calendars that institutions like churches sell to raise funds. Badly produced calendars with hideous graphics. I've already made the front page of the calendar with a tasteful mix of colours. 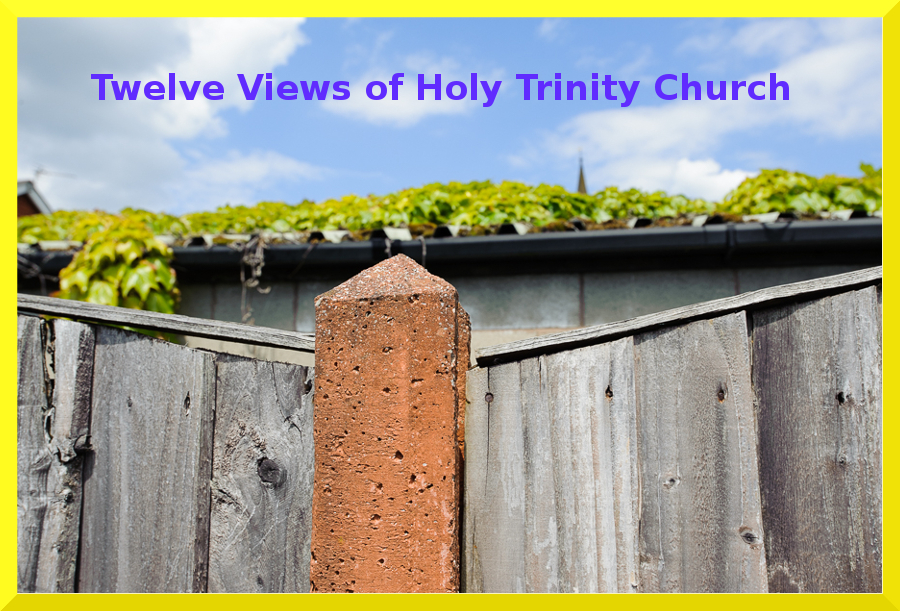 That gives a clue to the way my mind is working! I already have a few suitable pictures filed away. Some are a bit too pretty to fit the skit really well, almost too much like the kind of thing that really would be used in such a production!. But I took one yesterday that I think might work. 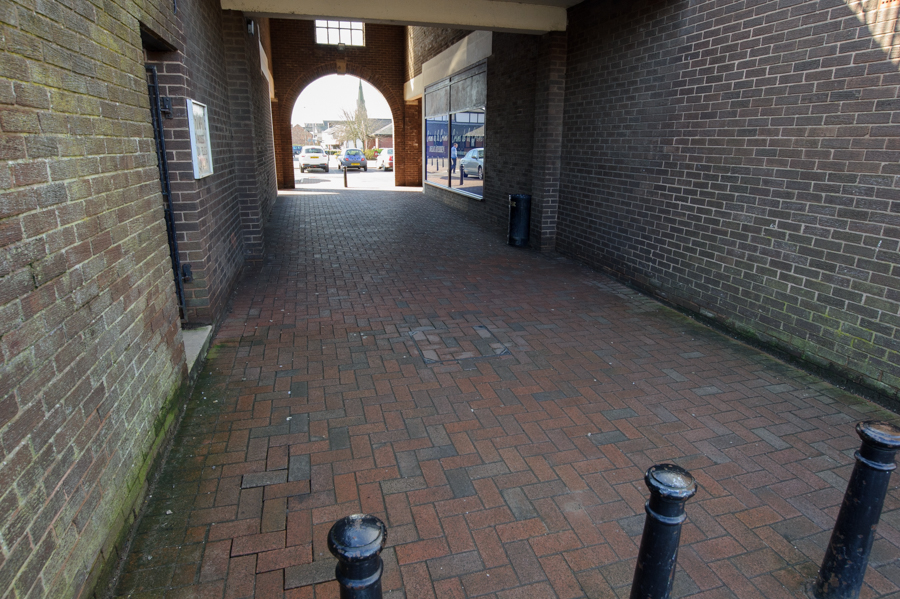 This project does stand a chance of getting completed. For a start I don't have to go very far to take the pictures. I can take them pretty much any time I have an hour or less spare. Best of all I have a target to aim at (twelve pictures), and a clear vision of what sort of pictures are required (ones where the church isn't the obvious point of the picture). It's also quite light-hearted - although on the serious side is the fact that with it being so flat around here the church spire really is visible from unexpected, and distant, viewpoints.

This is in complete contrast to a project which I have been making notes and plans for which I am pretty sure will never get any further than that. It seems like a really good idea that might even  appeal to people. Trouble is I not only know what kind of pictures I would need to make, I know exactly where to make them and even how to frame some of them. To actually go and take the pictures would be just joining the dots. Yet some people seem to like working that way.

I'm wondering if there are two photographic personalities: the proactive and the reactive. The former would approach the church project by using Google to check out potential vantage points, plan out what time of day would be best in relation to the position of the sun, decide in advance what focal length was required. Me? I pick a lens at random and go out the door for a walk when I feel like it. The only planning is to try to remember to keep looking for the spire and not get distracted by other things.

Doesn't often work though. I mean, this picture was all about evening sunlight, space and the shapes of the trees. Part of my ongoing collection of views around the village. But look! The church is in the frame. So which folder does this file go in? 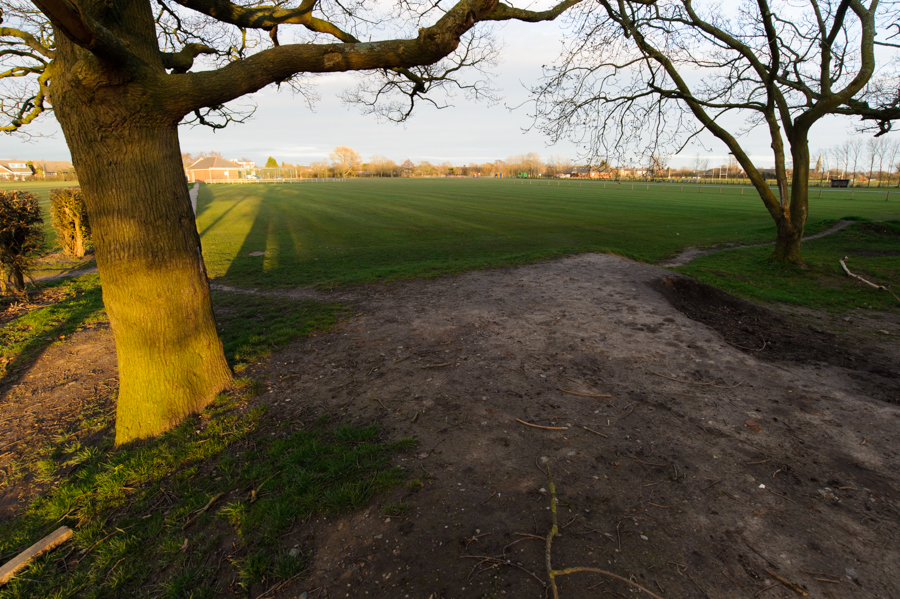