Something great about the internet 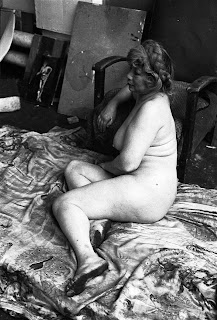 For all it's faults the internet has the ability to provide pleasant surprises. I mentioned a  post or two back that when I was at college (it was a polytechnic in my days, an school of art in John Lennon's) photography wasn't taken too seriously. The Open Eye Gallery had not long been open and was something of a novelty. Since getting back in to photography I've been checking it's website out for news. Not much has been happening to interest me (Martin Parr visiting the new site being about it), but this evening I clicked on the facebook link and checked out some of the FB gallery pictures.  I was amazed and delighted when I instantly recognised a smiling face from all those years ago which I then clicked through to find on Flickr.

Not only does this go to show how great the internet can be, but also demonstrated the power of photographs. There's no need for the taste of a Proustian madeleine to take you back in time in a moment. A photograph can do it too. Su always seemed to be happy, even when suffering from a cold like I am at the moment. She was unendingly generous and like a second mother to generations of 'starving' art students. Seeing that she is still around and still smiling really perked me up.

Unexpected events like this occur in cyberspace. I'd downloaded the first two episodes of British Masters yesterday (an idiosyncratic take on British painting in the 20th century) and during the section in episode  two about William Coldstream a couple of photos by Humphrey Spender (who I wasn't aware of) were shown briefly. A little searching soon revealed an archive from the Worktown project shot about Bolton in the late 1930s. What struck me most about them was how little Britain had changed between the start of WWII and the early sixties when I was growing up. Fashions were slightly different, but not much, and the Blackpool of the archive looked like the Blackpool I remember. Take away the cars and the clothes and the illuminations were just the same!

I don't know if all the photos from the project are digitised, but there appears to have been little editing done if not. Wonky verticals and horizontals abound. However this does give an idea of how Spender worked. Just the same as most do - working towards a good shot after seeing potential. Not all the shots are photographically interesting - that, perhaps, wasn't the concept of the project, but some are. Spender's nervousness about shooting, which is revealed in the biographical notes, is apparent in a number of the people pictures. A difficult site to find the gems on, though, as the design is cramped and clunky, but worth wading through.
PS A click from the Open Eye Flickr page revealed Paul Trevor's 1975 photos.
Posted by Dave Lumb at 20:04

A point of view

These two shots serve to illustrate how changing your viewpoint can make a difference to how photos look. The first was taken with a long lens and shooting into the sun. The long lens flattens the apparent space and the lighting leads to silhouetting and a graphic effect. 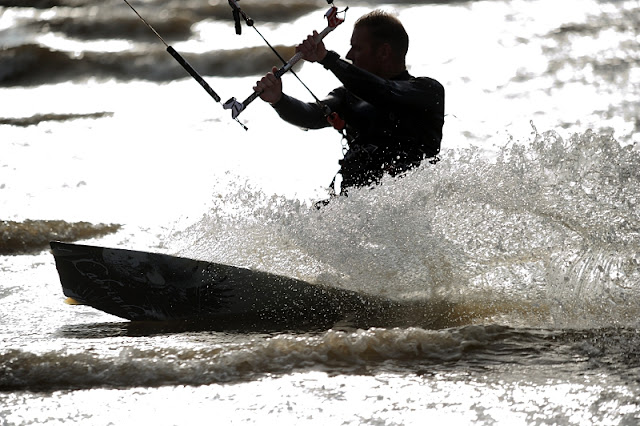 While still filling the frame with the subject a shorter lens used at closer range expands the apparent space, and the over-the-shoulder lighting lends a more pictorial air to the shot. 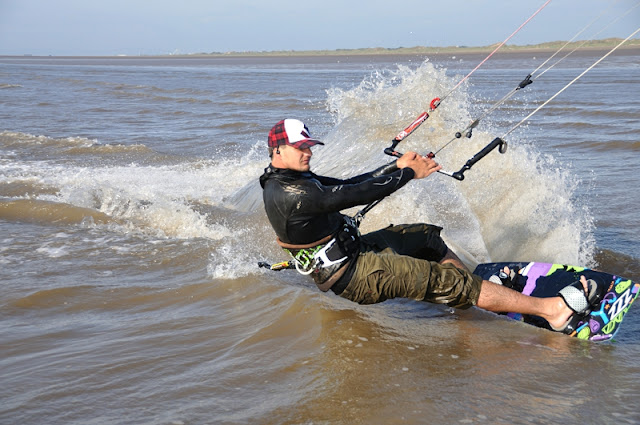 It did mean running the risk of getting soaked though! And that was why I was using less than optimal gear for the fast moving subject, the camera's focusing system not being brilliant at tracking moving objects, and the lens not the crispest. But it was a fun experiment. 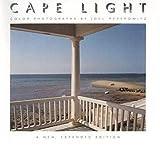 Although I'd bought it a few weeks ago I had deliberately put off opening Joel Meyerowitz's Cape Light knowing that it's main subject matter is beaches. Eventually I cracked and began reading the interview that precedes teh photos, and in doing so I realised that photos taken in different places by different people at different times don't always resemble each other because works have been seen but because a similar subject affects people in similar ways. So I carried on to look at the photos.

Why this book passed me by before now I can on;y ascribe to the paucity of my college library when it came to photography. Many of what are now classic, seminal even, books of or about photography were in print back when I was a student, but they were not to be found easily. I guess that could also be seen as a reflection of how the art establishment thought of photography in the late 1970s and early '80s.

It's plain to see why Cape Light has been influential. It is very much a book about colour and light. Already it has given me pause for thought about what 'makes' a photograph. And although there are similarities with my beach photos there are enough differences for me to be unconcerned about repeating another's work.

Although the use of a 10x8 view camera is usually thought to change a photographer's way of working by making it slower and more considered, and to change the look of the images through both the film used and the slow shutter speeds and small apertures used, the simple matter of a change of format from the 3:2 ratio of 35mm film (or DSLR sensor) to 5:4 also gives the images a different feel. It must have an impact on the way a photographer sees.

Thanks to the miracles of modern technology I was able to alter my viewfinder ratio and give the 5;4 format a try. The difference was striking. A brief walk around the back garden revealed that I was looking in a different manner owing to the altered format. Something to explore further. No doubt there will be those who will ask, "Why not shoot in 3:2 and crop later?" Well, that way you are still looking in 3:2. It's the alternative way of looking that interests me. 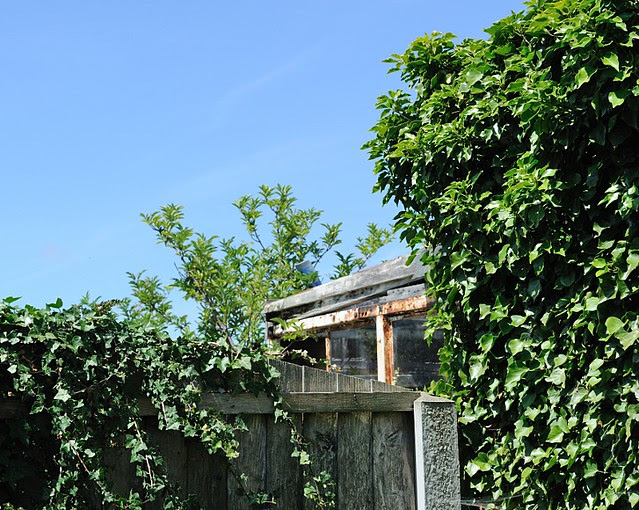 Looking at the work of renowned photographers can be inspiring and depressing in numerous ways. Good photos can make you want to go out and take good photos yourself. That's great. And when you realise that your shots echo those you admire it can be disappointing, but is to be expected. Disillusionment sets in when are taking photos that you think have some originality, only to discover someone else has been there before you. And when you think back you realise that you had seen their work earlier, but not picked up on it. That is annoying. Interesting, though, that images can work on us without our realising it.

In my case it was seeing some of Thomas Struth's Paradise series which reminded me of my 'smallscapes'. There is a distinct difference in that the Struth images take a wide view, whereas I am deliberately getting closer. 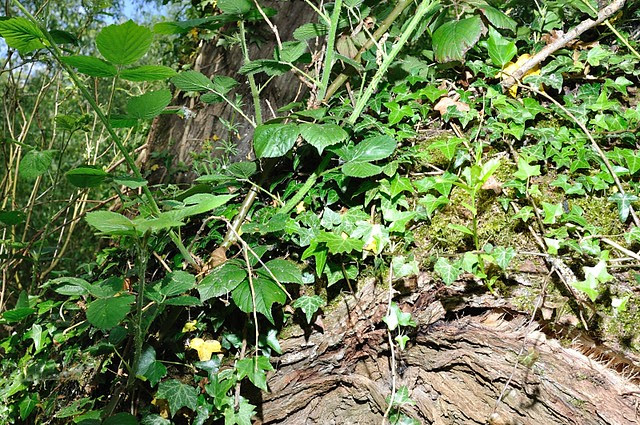 I was browsing today and came across a link to a photographer from across the estuary, who unsurprisingly photographs similar locations to those I frequent. There is a long-standing tradition in British photography of recording seaside towns, almost to the point of cliché. And for those who live in those towns the time when they shut down has a desolate appeal. I've been at it ever since I picked up a camera. It was looking at Joe Kennedy's gallery that I found a shot in his Off Season gallery (currently exhibited at the Harris Museum in Preston) which reminded me of one I had taken last year. The subject is the same, but the execution different. 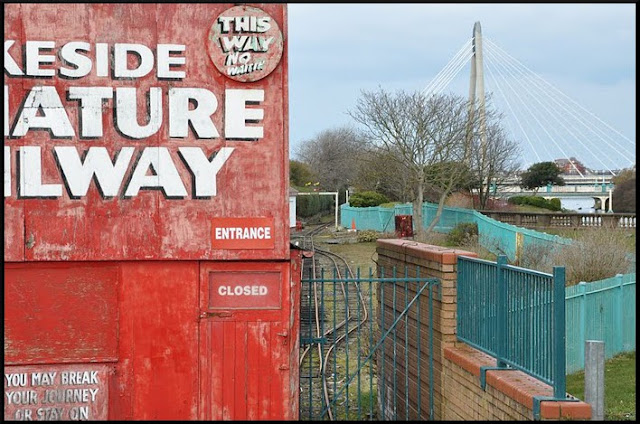 Maybe it's because I have a background in painting as well as photography that I resisted the temptation to make an 'art' photograph by placing the subject centrally in the frame and chose to use the play with the picture plane. To me this is a complex image. It could be considered as three images in one - being deliberately divided in two.

The red left hand portion harks back to the Pop Art movement and painters like Peter Blake. It emphasises flatness and graphic elements. The colour range and texture are limited. The right hand portion emphasises tricks used to convey depth and space on a flat surface - converging lines and distant objects made small. The eye is lead to a white arch, centrally placed in the frame of the whole.

The two halves of the picture contradict each other in their rendition of depth, yet the colours play against each other (red and greeny-blue), and the brick work echoes the colours and tones of the painted wood. Another aspect of the photo is something that interest me which I haven't explored too much as it's potentially trite. The interplay between natural and architectural objects. In this photo that is represented by the bare branches of the tree overlaying the triangular lines of the distant suspension bridge.

It's good to revisit earlier shots. Sometimes they can surprise you, as this one has done me. Looking at it again has lifted the ennui which had descended following the Struth shock to my system.