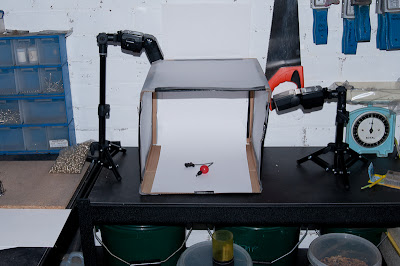 I've been toying with the idea of buying a light tent for some time. It's not that I'm cheap, but for the use I'd get out of it the cost benefit analysis always came down in favour of managing without!

When I found the instructions for making a light tent out of a cardboard box on strobist.com I had to give it a go. 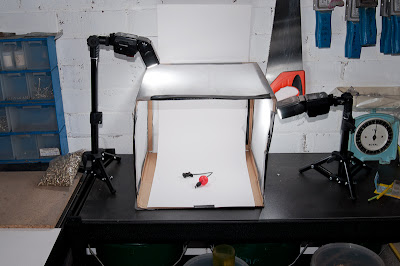 When I found out that a pad of tracing paper was going to cost me over a tenner I almost gave up on the idea, but a roll of greasproof paper at under two quid was worth a shot.

Fifteen minutes work with a Stanley knife and some gaffer tape and the flimsy construction was ready for action.

I had some scrap flexible card which I use for making cheap mounts for the prints I frame up to evaluate. So a piece of that got used as the background that curves up from the worktop. The lighting stands I already had for use when doing product shots for my website and fishing blog.

The addition of the 'tent' has made the results much better, even at the first quick attempt. Maybe not perfect, but a huge improvement over the days when I used a bridge camera and it's built in flash or natural light. 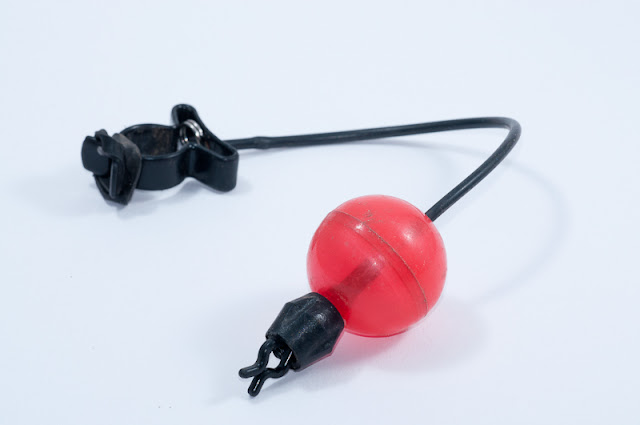 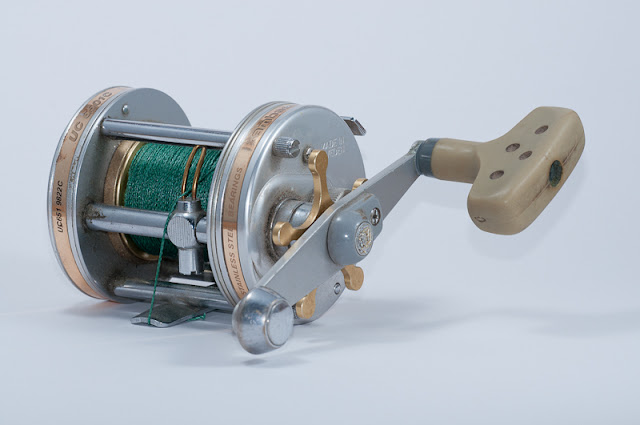 In praise of processing

There are times when the computer really can improve a photograph. You just have to make sure that the tools to hand don't dictate the effect, but that you use the right tool to make the picture you want.

The framing and depth of field were as I wanted, the balance of tone across the picture plane was not. 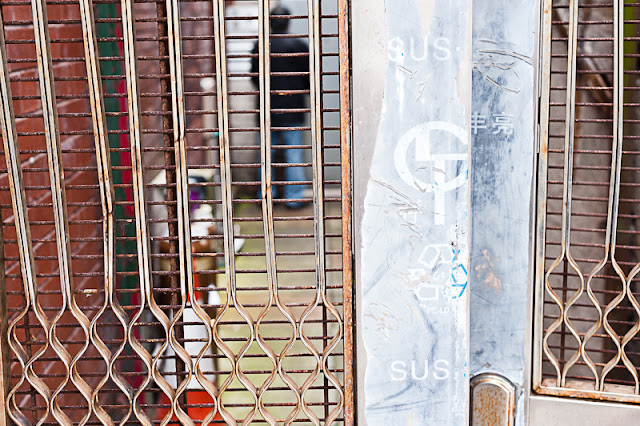 Using a virtual graduated filter on the right hand side, the equivalent of burning in a print, did the trick. 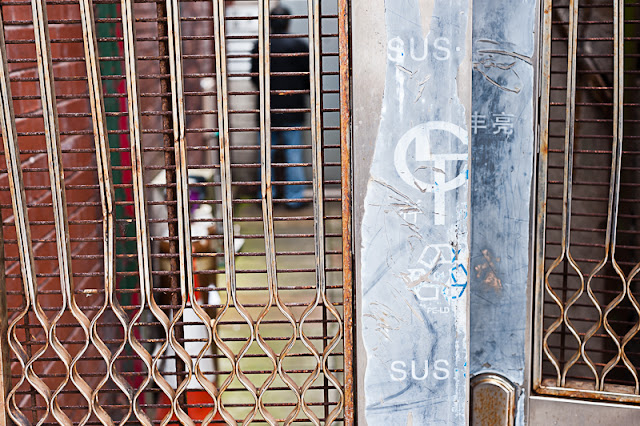 A funny thing is fashion. Shallow depth of field for its own sake, as mentioned in the previous post, is a trope of the internet photo sharing virtual world. The ease with which it is possible to manipulate digital photographs has made it simple to give pictures a 'look'. Here are a few, applied to a shot that would probably pass as a good street photograph in some quarters but misses for me by the split second it took the bloke with the dog to move part way out of the space between the wiggly worms and the man with the flat cap. Still you can always improve a nearly shot on the computer if you want internet photographers to heap praise on your work...

As it's a street photograph it really should be in black and white, with a vignette added for good measure. 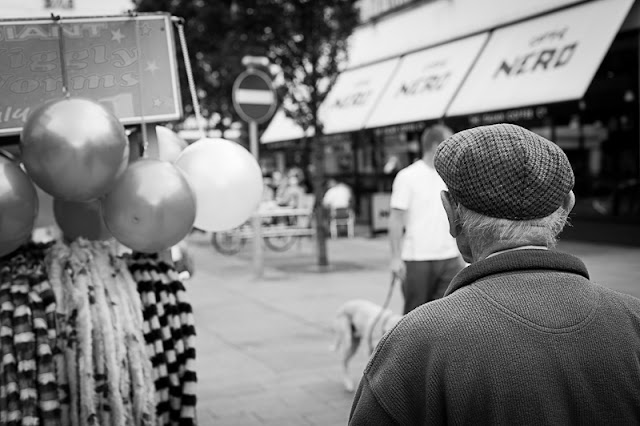 I don't think I made the vignette obvious enough.

Prefer it in colour? Perhaps it should be desaturated if it's art, with the blacks darkened for maximum artiness. 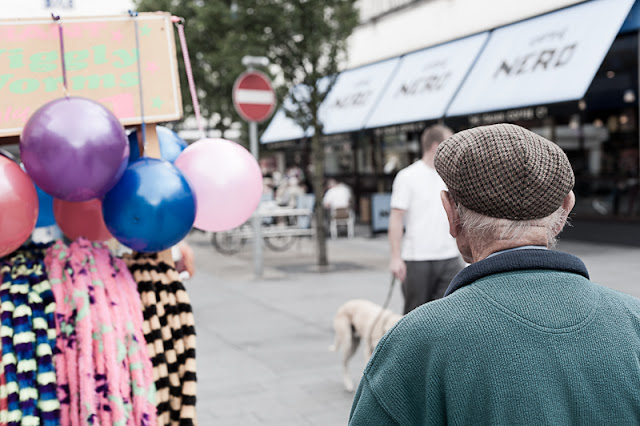 Have you ever seen anyone breathing who has skin that colour?

But the subject is so colourful. Lets boost the saturation instead. 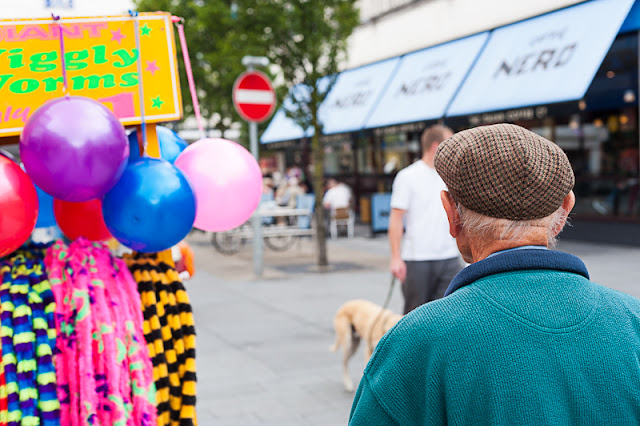 If I'd pressed the shutter release a split second sooner there'd have been no need to 'improve' the shot. The processing wouldn't have mattered as the content and form would have carried the message on their own. 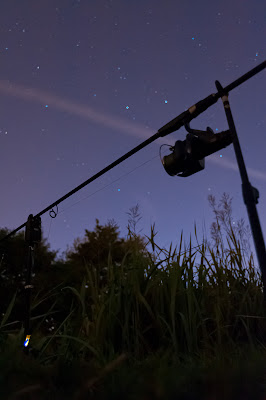 For various reasons I've not been motivated to pick up a camera in anger, apart from when I have wanted to take photographs in the editorial mode to illustrate my Lumbland blog. The editorial mode is how I describe making pictures which serve to illustrate, but have to have an eye catching element to them. Wide angle lenses, unusual viewpoints, shallow depth of field are three of the tropes which are part and parcel of this sort of photography.

Another 'trick' used in this sort of photography is dramatic or unusual lighting. The picture on the right combines a wide angle, low viewpoint and starlight to make a picture that (if I had taken the time and care to set up, rather than shoot hand-held) would have been a prime example of a photograph in the editorial mode. There's even plenty of negative space for a graphic designer to add text if it was used on a magazine cover.

These sort of photographs are often more about style than substance.

There is, however, a cross over into the documentary mode. Documentary photographs record things as they present themselves in front of the camera. Within the limits of the frame as dictated by the photographer. In this mode the subject, the content, comes before style. Although that is not to deny style and composition in the picture making process. There is a striving for objectivity. Sometimes this mode can stray into the picturesque editorial mode. There are many examples of beautiful documentary photographs of a harrowing scenes which make us question what precisely we are responding to in the image and what their real purpose is.

Current among much art photography is the documentary photograph that eliminates the picturesque and the rules of formal composition. A straightforward, deliberately and self-consciously unpretentious (and therefore pretentious) way of framing subjects is employed. As if art is scared of revealing its craft. This art mode has become rather too easy to adopt and seems to be the current default setting in art photography.

Art photography of this sort is very serious. It is not supposed to be decorative. It is supposed to demand thought. To be questioned. And most of all there must be a statement about it. It's not enough for an art photograph to be about itself. That's so post modern.

The photograph below is about itself. It's about colour and form, about the clouds echoing the pools of water. Seen large its location is obvious to anyone who knows the area so has local appeal. The colours are muted and restful enough for it to match the decor of an interior and hang on the wall as an integral part of that décor. Not as an image, just a design detail. It is documentary as it tries not to beautify the scene. It nods to art photography in that it is boring - in content, form and colour. 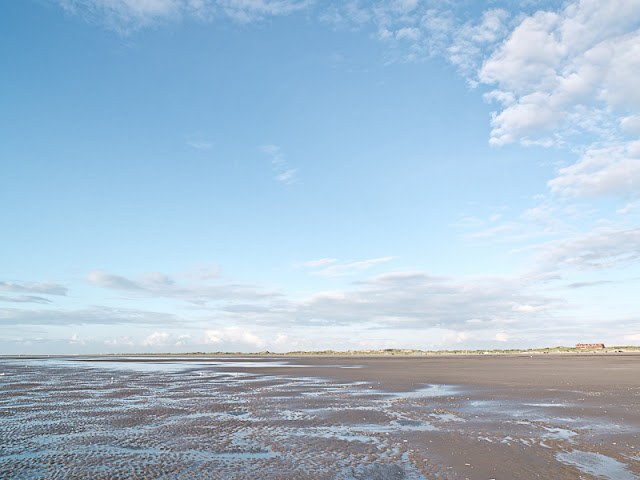 The next photograph, on the other hand is documentary but picturesque. While it is not in the art mode it is in the Fine Art mode (not the capitals). Fine Art photography aims primarily at decoration. It must be well crafted, it usually looks like any number of samples of itself. The light will always be  'stunning'. It's all tending towards the superficial in teh way that the editorial mode can. 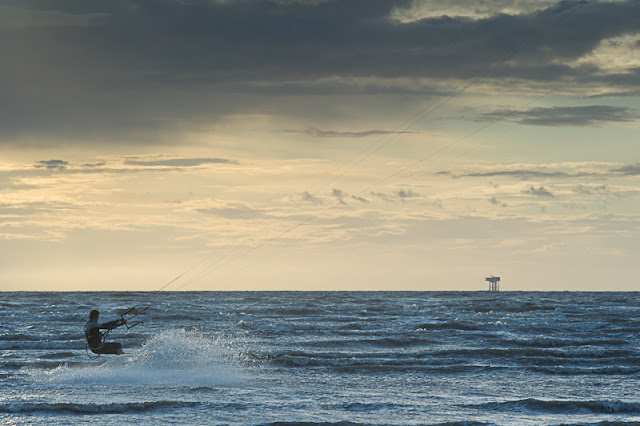 Then there's the ever present internet meme of shallow depth of field. This is probably the most widely used 'trick' in the modern internet photo-sharing photographer's bag. It has its place, used well it isolates a subject from a cluttered background. All too often it is done for its own sake - to demonstrate the quality of the equipment used. My excuse for the picture below is that the photograph is not just about depth of field, it's about complimentary colours, compositional balance, light, and place. 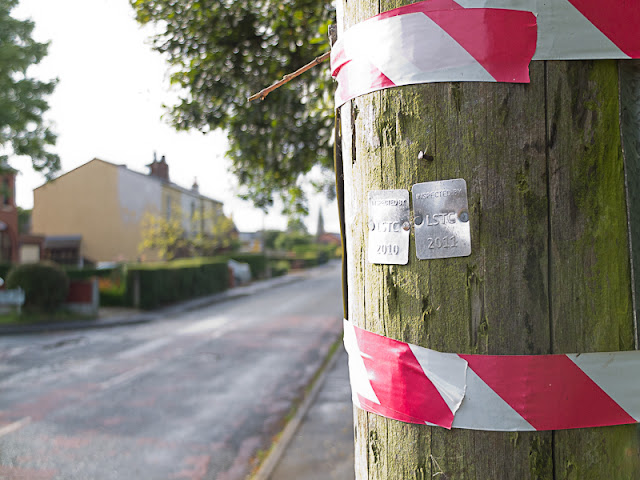 And finally. Two pictures which I took for no particular reason. Of all the photographs in this post they seem the most personal because I made them to suit my way of seeing rather than one of the accepted norms. I don't consider them decorative or illustrational. They are documentary. They could be classified as being in the art mode because they show the banal in a snapshot style. But they are concerned with compositional form and colour. I don't think they are about anything else other than what they show. Unless they are about what they make someone other than me feel or think when they look at them. 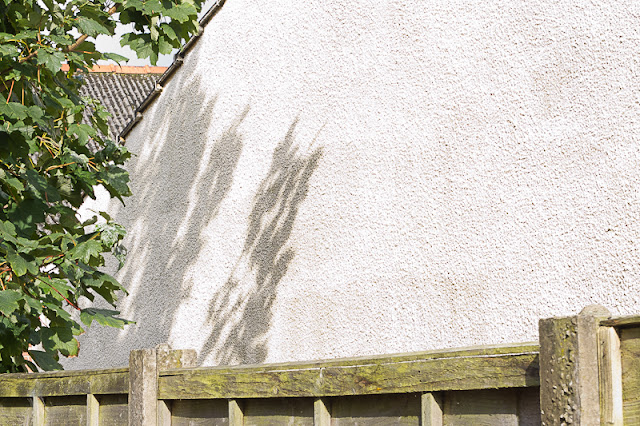 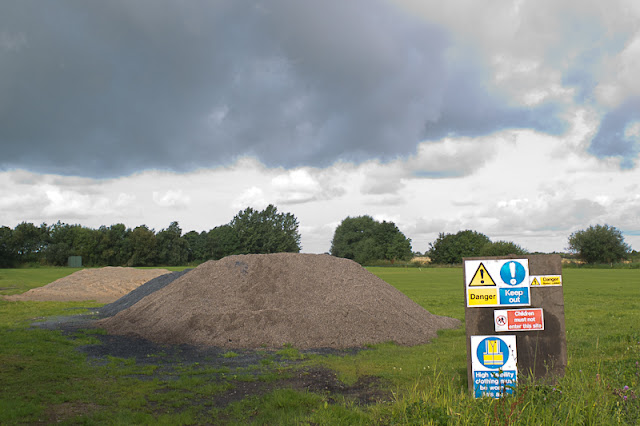 As a brief technical aside, some of these pictures were made using the X10 which I have been using to try and regain some affection for it. I simply can't get on with having a viewfinder that isn't at least 95% accurate. Using a rear screen makes me self-conscious if a passer-by spots me photographing something 'unphotogenic'. There is something about pressing my eye to a viewfinder that helps isolate both what I am looking at and me from the surroundings and lets me slip out of time and concentrate on what I am doing without any embarrassment. The camera becomes something to hide behind when a viewfinder is used. 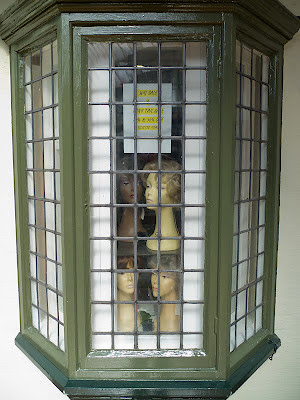 When I took this photograph I knew it reminded me of something.

The other day I found a catalogue from an André Kertész exhibition from a long time ago and looked through it. There it was - a photograph of two heads staring out of a window.

Had the Kertész been stored away in my memory and somehow prompted me to take the photograph when I saw the heads in the window? Hard to say. I do think that we ape images we have seen long ago far more often than we realise.

"You should be a professional."

Why is it when 'non-photographers' see you have a 'good camera' and make well exposed photographs that are in focus with crisp detail they automatically tell you to turn pro and (often) 'do weddings'? Sounds like a nightmare having to make the photographs other people want, and to be under pressure to deliver the goods. Well, it's a nightmare to a slacker like me!

Here's another snake. Cropped and edited to make a more graphic picture. The wretched creature refused to face the sun. Fill flash plus Lightroom helped me out. I think a slightly wider aperture would have made the snake's head stand out more. 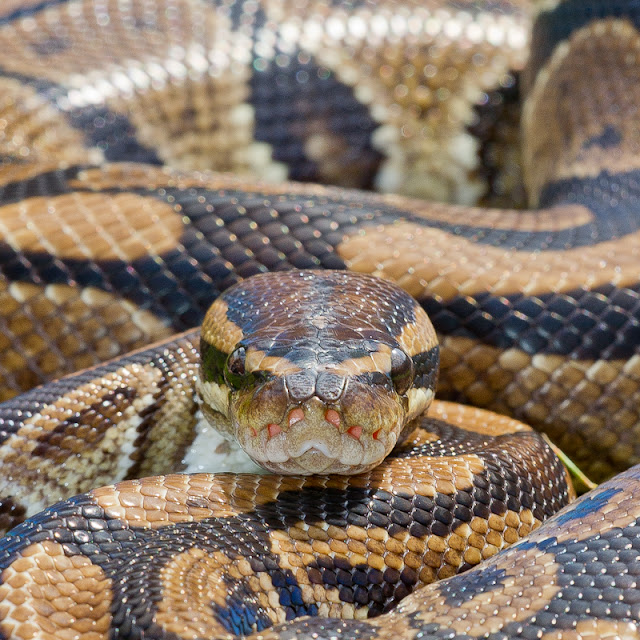 As an experiment I tried out the close up facility on my cheapo 28-105 at 50mm today. It's not too bad and gives me a wider option for the DSLR to put smallish things in a broader context. Frame-filling insects get a bit dull after a few dozen. Unlike the python, the common darter did face the sun. Alas I was on the wrong side of the gate, and although it allowed me to open the gate and close it behind me it then decided to buzz off. Leaving me with this 'over the shoulder' shot. 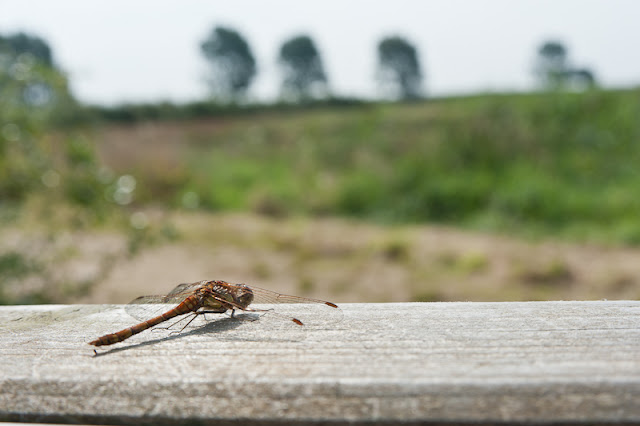 Never work with children or animals

When I offered to photograph some friends' snakes I thought they would be obliging subjects. Turns out that they are either camera shy, or (with the sun on their backs) escapologists. They also slither on the ground - requiring the photographer to do likewise. This is not good news for an ageing bloke with dodgy knees, hip, and back.

Despite the problems I'd quite like another crack at the snakes. They have interesting skins and make nice shapes. Consideration would have to be made as to background, and a raised working surface would help my old bones! 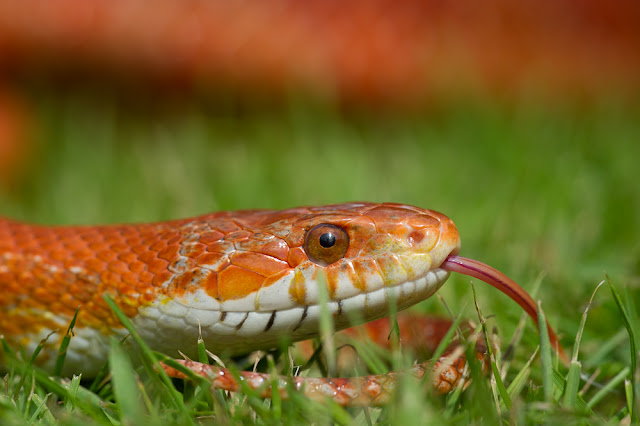 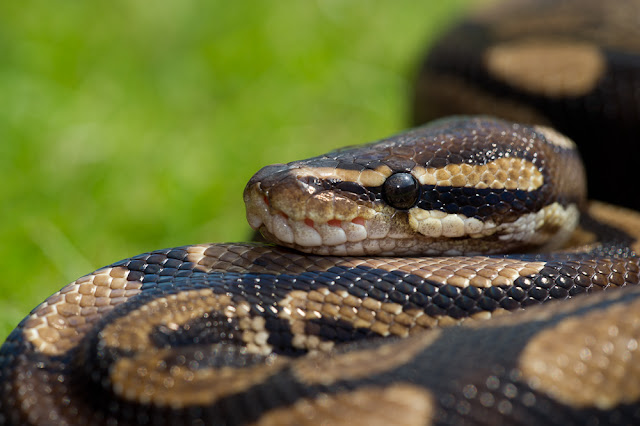 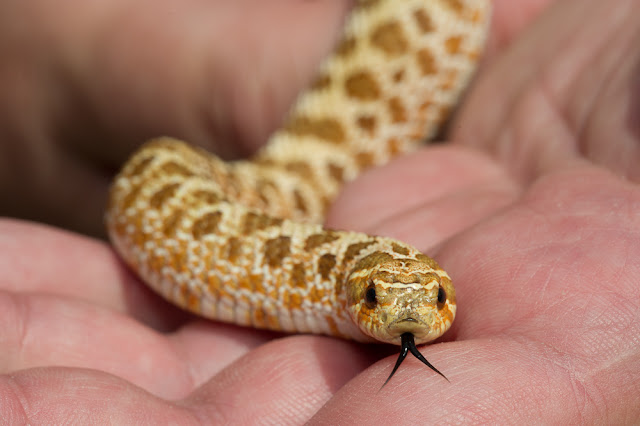 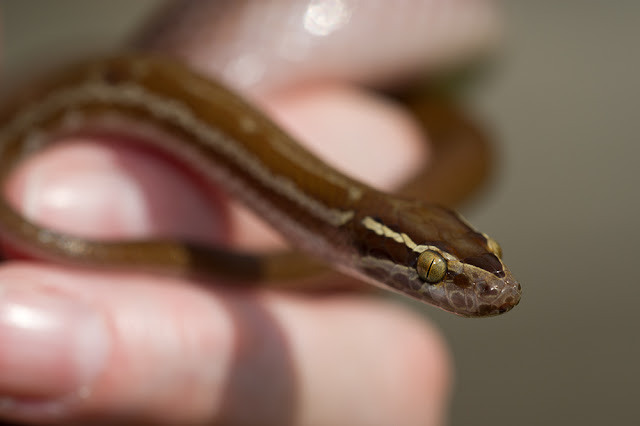