A lot of 'stunning' landscape photographs get taken shortly after sunset at what is often called 'the blue hour'. The sun has set but there's a glow on the horizon and if the sky is clear it's decidedly blue. Most photographers don't like seeing contrails in those clear blue skies. But I'm not most photographers. On clear, still, cold winter days I am often amazed by how many contrails there are. How busy the sky is. Where are all these planes going? Who is on them? Why are they travelling? I've often wondered if it would be possible to make pictures about this.

Making a late walk to catch the last post the contrails were more noticeable than ever. The darkened evening sky and the low, red, light from below the horizon made them stand out more than during the middle of the day. But on their own they would just be streaks on a blue ground. By focusing on natural forms in the foreground and letting them go to silhouette I got a nice contrast. Maybe something to work on a bit more to make some better images. 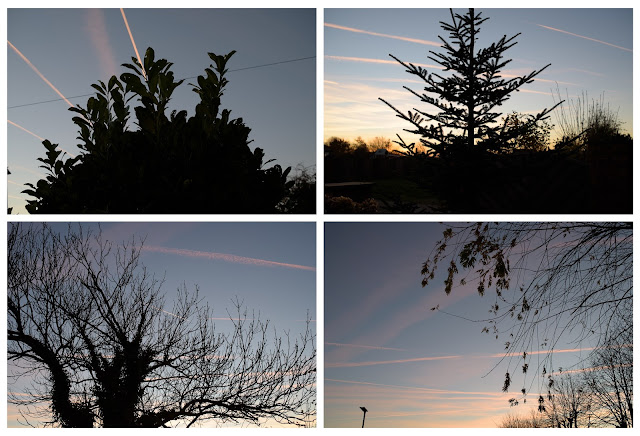 After a bit of a wait in the Post Office the street lights had come on. so I sought out some more village views. Being out earlier than last time businesses were still open, which altered how they looked. The slight hint of light in the sky also made for a different atmosphere to last time. Still just sketches really. A tripod would make the pictures sharper and less noisy, but some locations would see me getting run down to get the perspective I want! 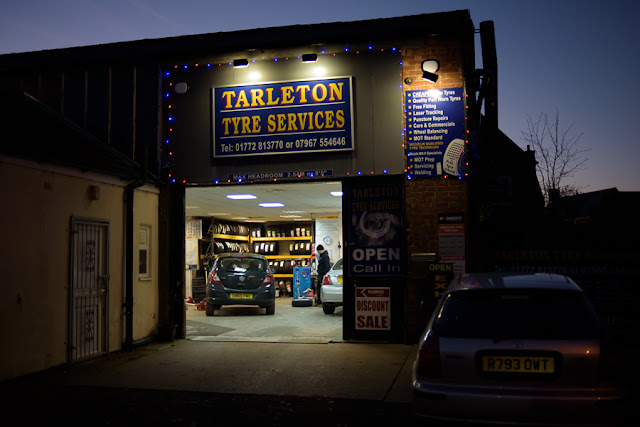 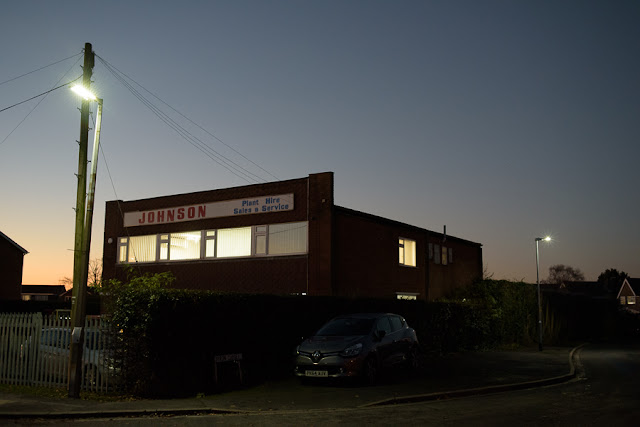 On the last leg of the walk home I started to get snap-happy. For some reason these looser shots which I take without much thinking often seem more mysterious. And after dark the familiar does often become mysterious. 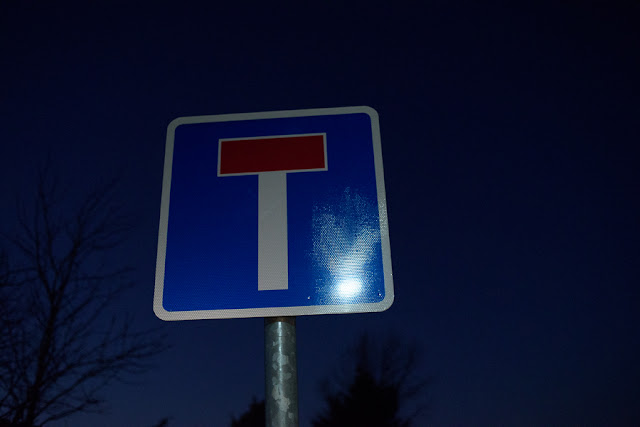 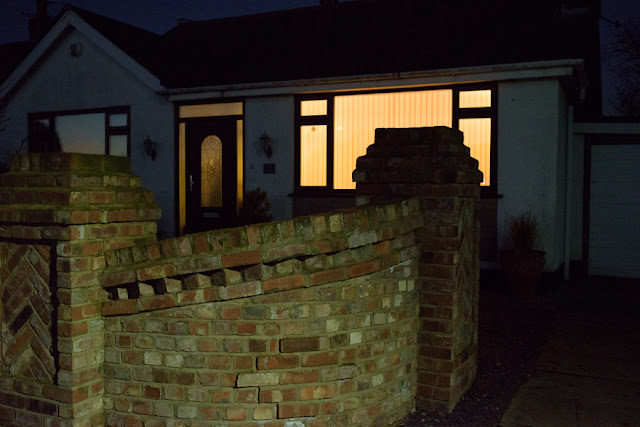 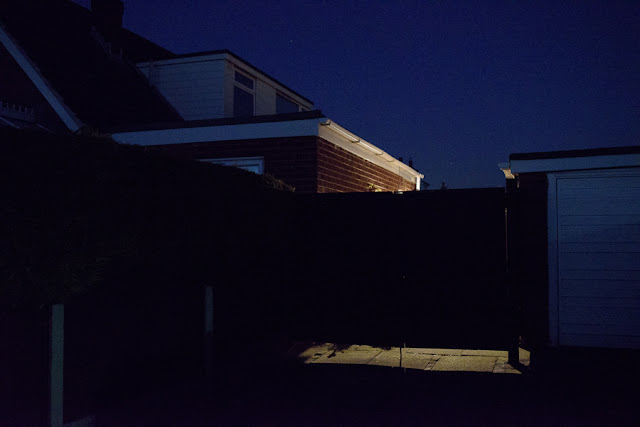 Once again I find myself wondering why other people can't come up with subjects to photograph when taking a walk and looking seems to work for me. maybe that's because my subjects aren't so much what's in the pictures but ideas. The contrail pictures aren't about contrails, they're about mass global transport and the environment. Maybe that sounds pretentious, but it's how I think about them. The random snaps are as much about what is hidden in the shadows as what is shown in the light, and also about the recurring theme of mine, seen also in my Englishman's Home pictures - privacy. Lights on, curtains drawn.

At last I've had some time away from work forced on me and managed to make use of it with the camera. Friday saw me having to go into the market town of Ormskirk for an unspecified period while Vauxhall attended to my car on its second recall. The first recall saw me wandering around the place all day, so I didn't know what to expect. Thankfully it was all over before lunchtime. The place grows more like a ghost town each time I visit it.

That means there's not much to photograph, especially on a non-market day when the streets are all but deserted. Without the market there are few places to buy anything that isn't a coffee or junk from a charity shop. Shops which have been there years, as far back as I can remember when I was on work experience in the town, are closing down. The record shop where I bought Never Mind the Bollocks went long ago, but the greengrocer's which I photographed back in 2013 with it's wares displayed on the pavement as ever, is also appeared to be no more. Maybe it was shut for the day, but it didn't look like it. Photograph things when you have the chance because they might be gone before you realise it. 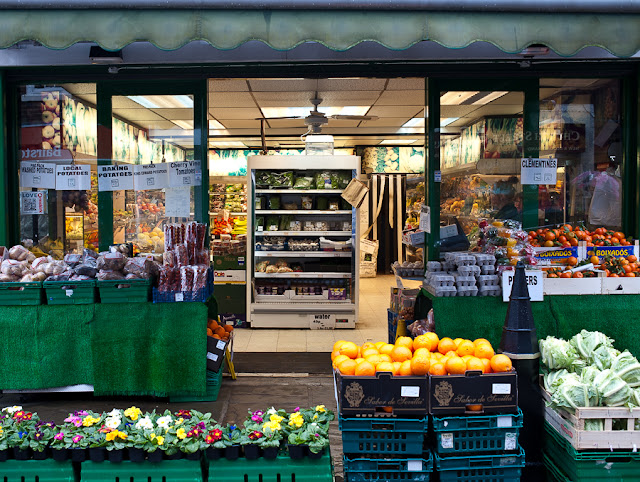 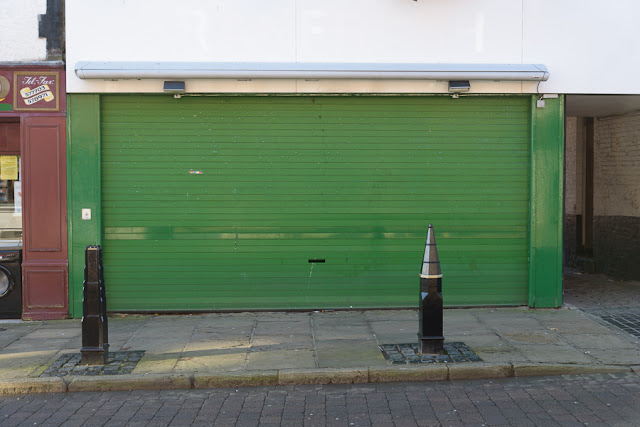 Whether it would be worth recording the closed down shops, the charity shops and coffee houses, I'm not sure. It feels a bit obvious, the sort of thing you expect someone is already doing. But is it being done?

I was in half a mind to go an have a more serious look around today but I let things slide and had some shopping I wanted to do. That meant a trip to the seaside. With the shopping a failure I headed to teh park and ride for some cheap, time unlimited, parking. The bloody council had put the charge up by 50p, so I parked in a two hour free parking zone and used the park and ride toilets anyway. Tight? Me?

I left the car in bright sunshine, and almost immediately began to see pictures to add to Sandgrounding. But barely had I got to the sea front than a heavy mist rolled in. 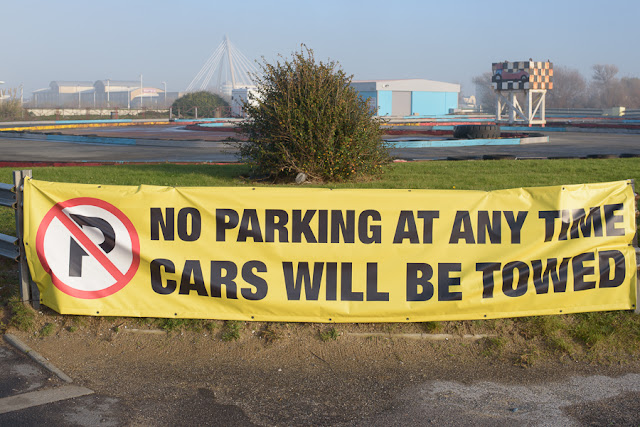 I've written about mist and fog before. They are transformative and simplify what can be seen. Not one does background clutter get hidden, but colours become softened and can almost disappear completely. Fog is a sort of monochromatic filter. I don't know what it is about the go-kart track that attracts me, but it has done ever since I picked up a camera and walked past it. 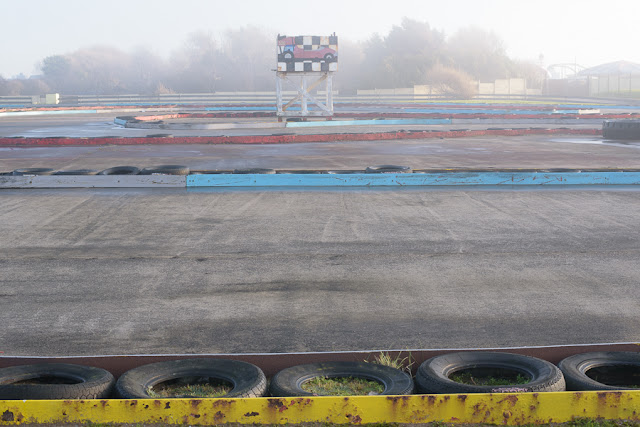 Add a wintry sun to fog and it becomes easy to see pictures. It's hard to stop snapping away. 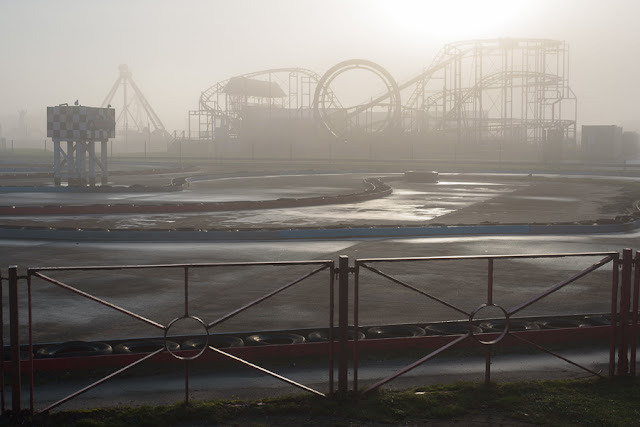 Every now and then the sun would strengthen and add light to a subject. 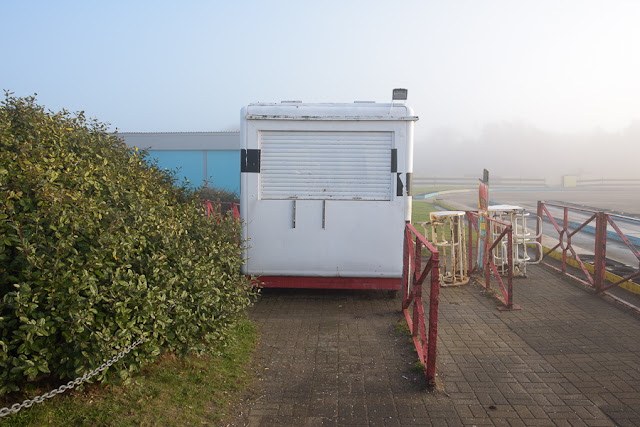 Then it would fade and a little help might be required to add some 'spot colour'. To heighten it I used the photography enthusiast's hated tool - the pop-up flash of my camera. I actually like the effect the pop-up flash gives. The drawback is that when I'm wearing a cap the peak gets in the way and half closes the flash which then refuses to fire. 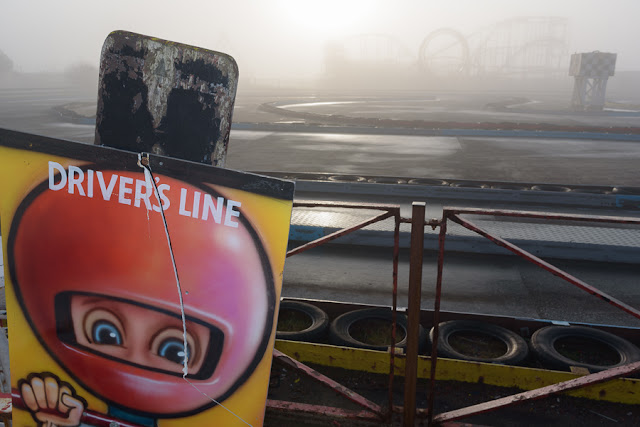 Soon the fog was really closing in. All I could do was get increasingly minimal. 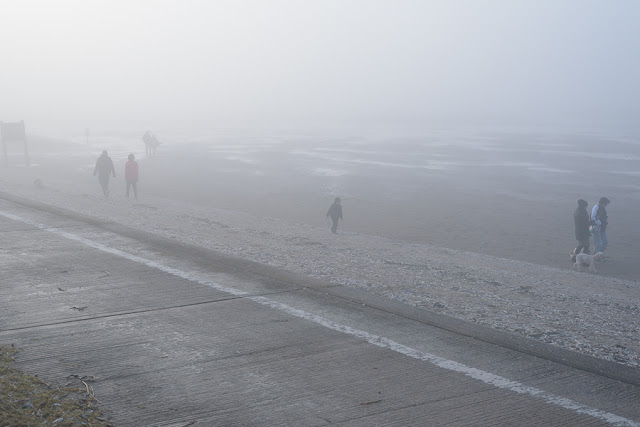 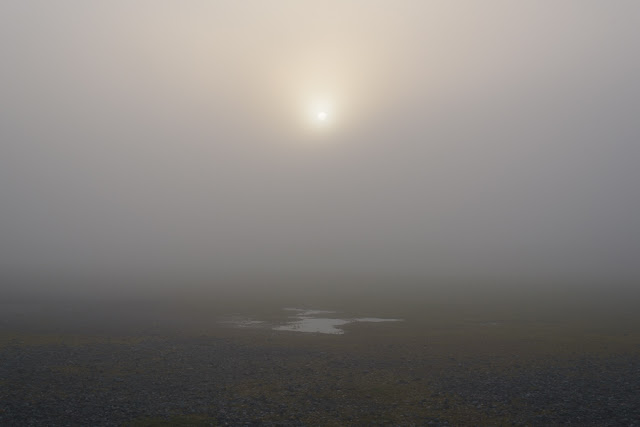 Maybe it was the fog, maybe it was having a break away from any serious photographing. In just under an hour I'd rattled off a load of frames and come away with some I like and some that have got me thinking. Why it is that some days you get in the zone is a mystery. One thing I do know is that being there doesn't last long. As in anything, when you are in the zone your brain is working overtime. It can't last before the intuitive thinking starts to get sluggish and you slip back into trying to make things work. Which they rarely do when you desperately want them to. far better to stop. Chill. Start again and hope you can get back in the same frame of mind.

No time to focus

Time hasn't been on my side lately. The old enemies of work and weather have kept my cameras out of action. I'm less inclined to just set off snapping away and increasingly only wanting to take photographs for projects. Luckily my Sandgrounding project, which doesn't require great examples of photographic virtuosity is a good enough temptation when I can add a couple of hours on to a trip into town. As usual my attention was drawn to the scruffy and down at heel! 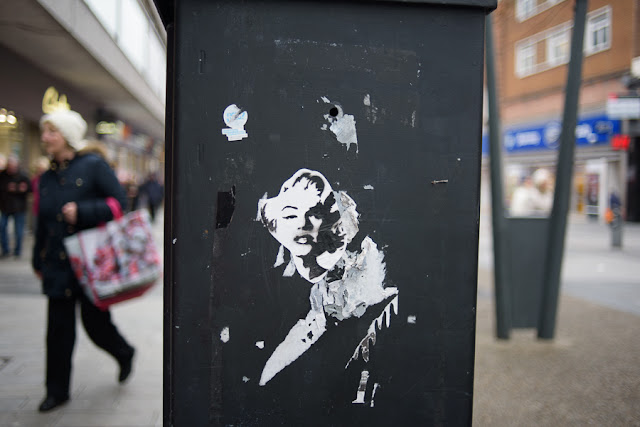 This time out I actually had something specific in mind to investigate. Something that might become serious. If it does then it would give me something to work at on weekends when there are no poultry shows. However, my plan was thwarted for the time being by two unforeseen circumstances.

Last week I'd ordered three more books from Café Royal Books. Cheap, A5 black and white, saddle stitched (printer speak for stapled!) publications. One was of photos by Ken Grant taken in Southport. So I went and took a couple of snaps in Cable Street for myself. 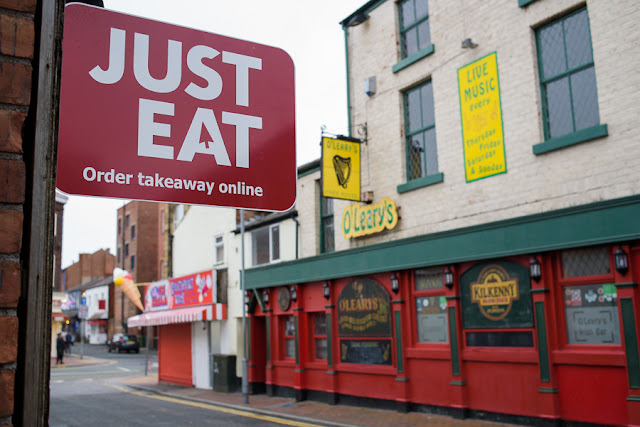 There's something messy in Ken Grant's pictures, which I also see in some of Tom Woods, which appeals to me.Messy but with some kind of underlying structure at times, but the subjects are what is really important. Fussing over making pictures like Cartier-Bresson's with his famous 'geometry' and decisive moments feels kind of tedious. It's my antipathy towards 'clever' photography kicking in again. Or maybe my low boredom threshold?

I have taken a lot of pictures which fit a certain style of urban, documentary, landscape photography in my time. It's quite prevalent around the web and in print. Where things are presented head on, almost flattened as blocks of colour and/or texture. Often shot on overcast days. I used to really like it, but now it's got to look a bit easy and become another trope. 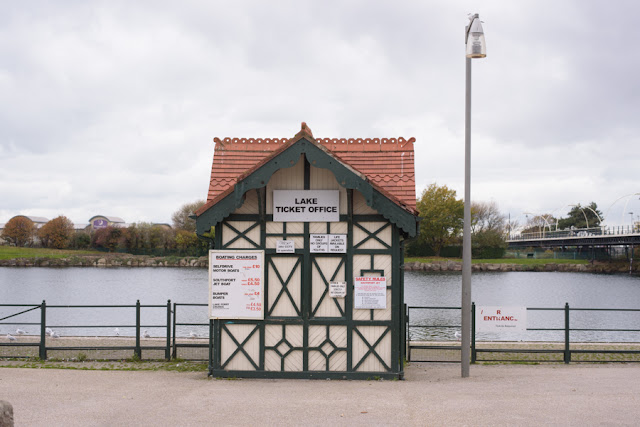 The more I look at pictures of places without people in them the more I think they are a lacking. Pictures of people doing stuff, in environments, is what is most interesting to look at. Portraits of peopel isolated aren't very interesting to me. That's why I found more of the rejected portraits from the Taylor Wessing prize to hold my attention than any of the shortlisted ones. But I'm no great judge of what makes a portrait. 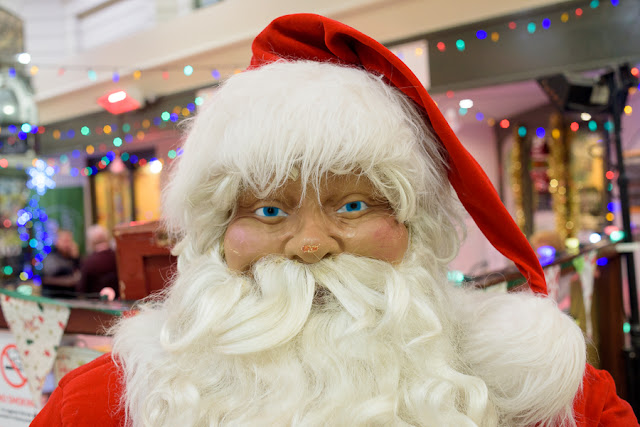 Closer to home I've been making an occasional snap on my way to or from the Post Office. Over the river the pet food factory is expanding. Too far away and too fenced in to really document it, but it will be changing the landscape. I'll look back at pictures made in the past to see how much of a change. 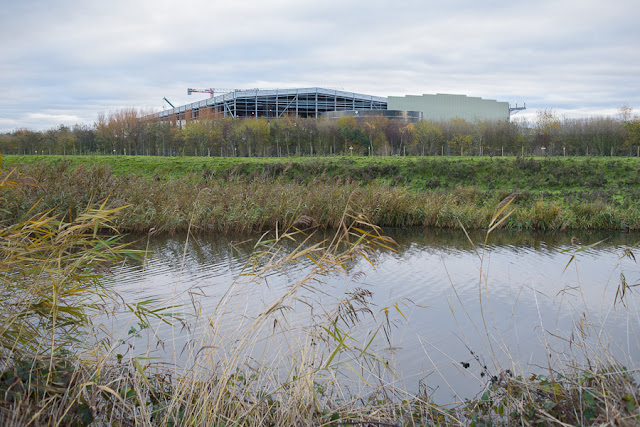 On the home straight?

Thankfully, I was saved from having to act as official photographer at the bantam show today. But this time it felt like I am coming to the end of this part of the project. There weren't many pictures I thought needed  taking again. I did try to get more of people tarting their birds up, and some shots of their 'make-up' kits. Some more of this stuff for variety and choice would be good to have. 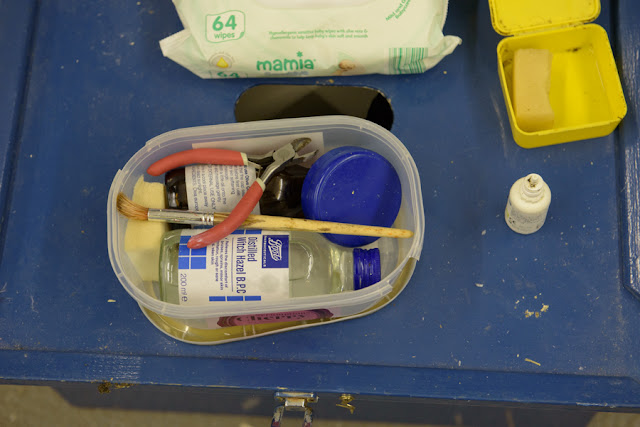 This shot would have benefited from a shift to my left and a swing of the camera to the right. 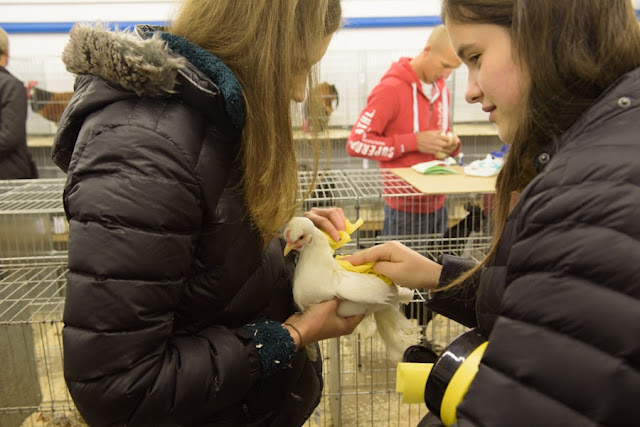 But when in doubt, shoot straight on to a subject. 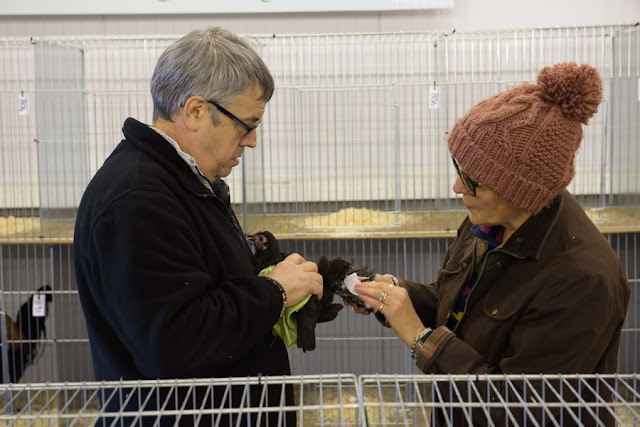 Trying to get a clear shot of what is being done with cotton wool buds or nail clippers is difficult. And having to use a slowish shutter speed doesn't help either. So the wider shots have worked out better. When there isn't clutter in the background. But finding the right angle is all part of making decent pictures. An important part too. 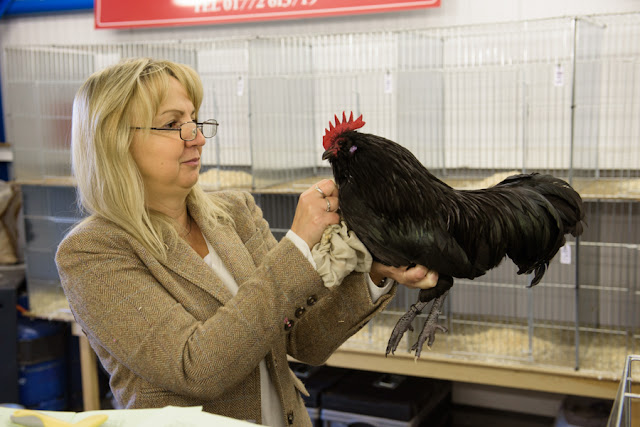 What I must make an effort to do in future is photograph the judging. It's the biggest gap in the project, apart from 'at home with my chickens' pictures. 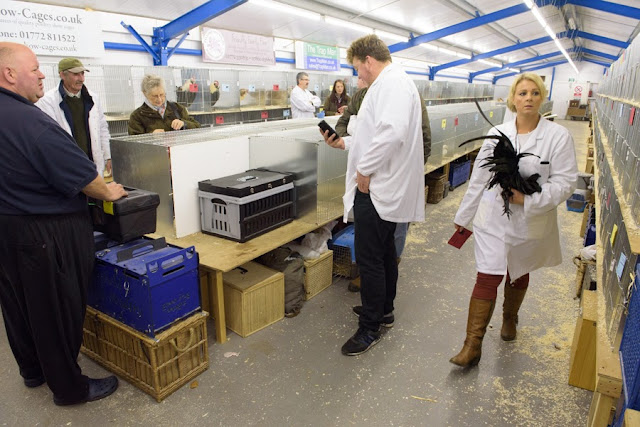 The judges get special treatment and  a table of their own for lunch. The light through the window was irresistible. 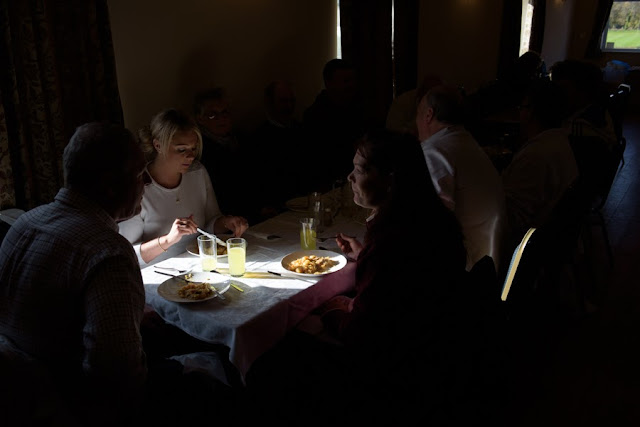 Naturally some of the raffle prizes that weren't (literally) chicken feed had a poultry theme. 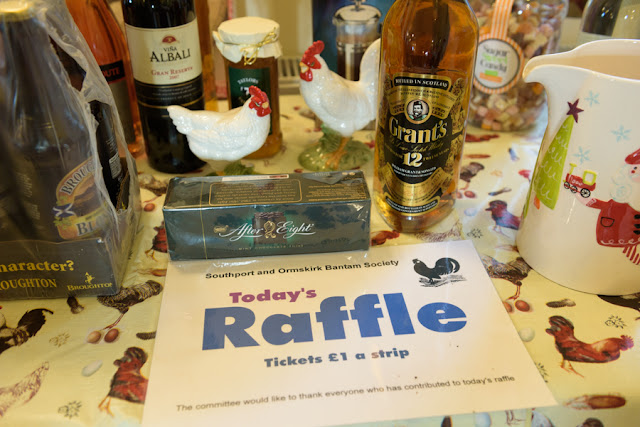 Some of what I got today should fit into the book to either replace existing pictures or take a place of their own. With one more auction and show this year I hope I'll get what I need to make it all fall into place.

I had another dabble at portraiture. I'm making slow progress. At least I'm getting the backgrounds free of clutter and somewhat out of focus. I need to work on my framing and subject direction. 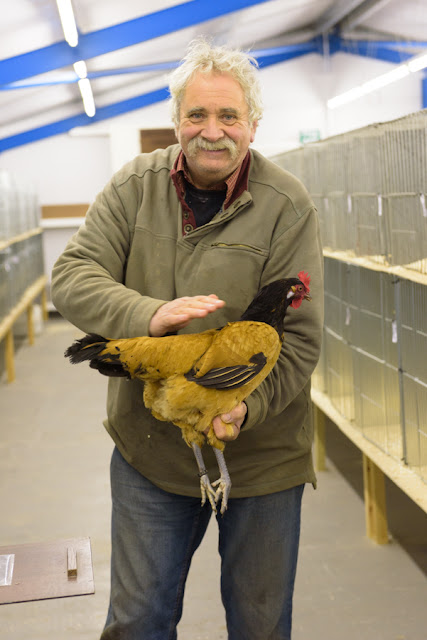 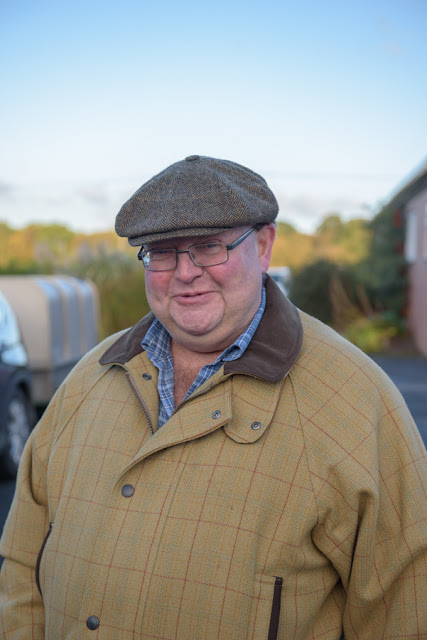