The next best thing to taking photographs is looking at them. Which, apart from taking scenic shots when fishing, is pretty much what I've been doing of late. I did take my X10 along to a fishing show at the weekend, but I'd forgotten how to use the thing and most of my efforts were messed up. Still, I did manage a couple of 'snapshots' which made me realise that even when I'm framing quickly with no conscious thought of making a picture I sometimes manage to get some sort of composition starting to work. Of three 'portraits' I snapped all have the subject's face off centre and approaching the dreaded 'third'! 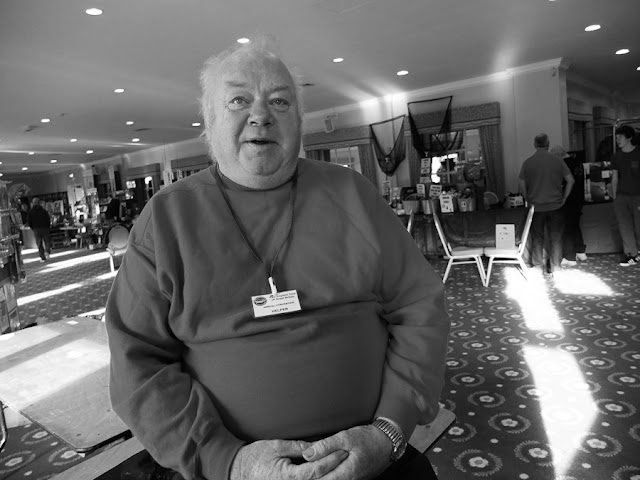 The photographs I've been looking at have been in books I have added to my collection. After missing out on the first edition of Pentti Sammallahti's acclaimed Here Far Away I made sure I secured a copy of the second edition when I saw it announced on The Online Photographer (TOP). When it arrived I was excited to open it up. Alas I had that feeling of dissatisfaction I've mentioned before of finding myself admiring the cleverness of the pictures rather than what they have to say. I had that feeling looking at the print offer on TOP too. As if these are photographs made to appeal to photographers. It's all a bit too much like jazz to me. Stuff you can only appreciate if you are in the loop and thoroughly tedious if you are not.

But perhaps that's how the sort of photographs I find I get more out of appear to others. Two more books arrived a few days after the Sammallahti. Two books of boring photographs of Britain: Pierdom by Simon Roberts and Strangely Familiar by Peter Mitchell. Neither book contains obviously 'clever' pictures. They are both quiet, unassuming collections of pictures which benefit from quiet, considered perusal. Maybe I connect with the subject matter better. Pierdom is about the British seaside and Strangely Familiar about the North. There's an element of nostalgia in both books, even though some of the pier photographs were taken as recently as this year.

One thing that Pierdom (and, just yesterday, this article) has done is stop me worrying about the white balance issue I thought I was having. The colours of the sand and sky look pretty similar to those I was getting before I started having doubts.

The Reuters piece made me think again about how clichéd photographic representation of the British seaside has become. Did it start with Tony Ray-Jones and get continued by Martin Parr and his followers? Is it the way the British really see their seaside resorts? It's always the tourists who are depicted by outsiders. Middle class outsiders photographing the working class holiday makers always brings with it a suspicion of the sneering which Parr was accused of. Photographs aren't neutral and people always read into them what they want to.

For all I have reservations about Parr and Ray-Jones I still admire their work. If it wasn't in London I'd go see the exhibition which brings some of their photogrpahs together. I'll no doubt be adding a couple more books to my shelves soon - one of Ray Jones's colour pictures and one of Parr's black and white (the reverse of what they are both most noted for). 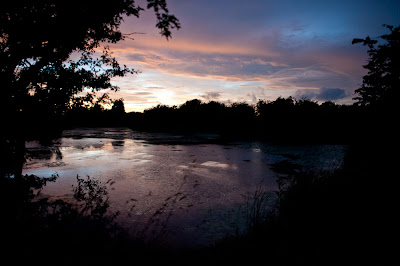 For the last month I've been making the most of the fine weather holding and going fishing whenever I've had any spare time. There has been some interesting light which I have photographed in my usual lazy way when I'm fishing. Near enough is more than good enough!

One evening when the sun had been officially set for almost an hour and I was walking back to the car the afterglow reflecting on the wind ruffled lake stopped me in my tracks. Of course I had no suitable tripod with me and had to hand-hold the camera. Whenever I do this the most pleasing composition is the one which suffers from camera shake, and so it proved.

I resolved to return the following evening without fishing tackle but with tripod and wider lens. The light was good and there were sparse clouds promising a chance of getting a similar shot. The only thing missing was the wind. I set up in advance to get the framing right - and realised the wider lens was just a bit too wide. Before the sun set it was possible to hand hold and keep the shutter speed up enough to avoid wobbly-hand syndrome doing its worst. This allowed me to position the sun behind some leaves, stop down the lens, and get a starburst. A nice enough picture, but not what I was aiming for. 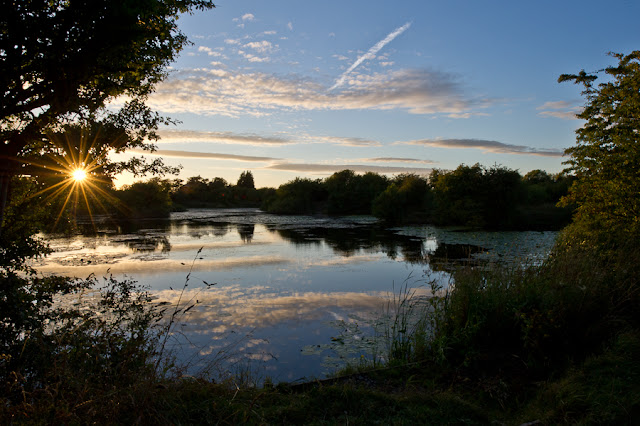 Nature never repeats itself, so it was no surprise that when the sun set cloud formations wouldn't perform and replicate those of the previous evening. The pink glow refused to materialise, the clouds began to block in and foil my carefully chosen composition. I was forced to move and make the best of things. While the result wasn't what I had in mind it evokes a different, but still satisfying, mood. 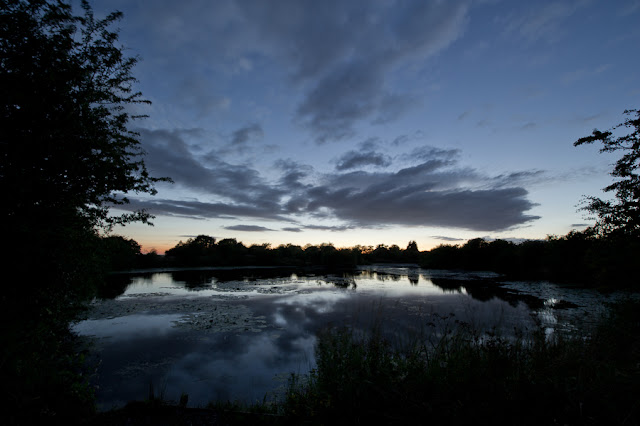 A rainy day today meant no fishing, so when things dried up towards evening I ventured out to my usual haunts along the shore. The light was changing all the time, with showers moving overhead and along the horizon. The sandplant wasn't doing it for me so I drove south to the track the shrimpers use. To me these two shots evoke what it feels like out there. The light certainly helps (the low grey cloud helping the framing for one thing), and it also seems that the telephoto's compression of depth manages to convey the space and flatness. Which is counterintuitive. A wide angle lens, encompassing far more, would seem to be better suited to conveying the feeling of being in a wide open landscape. 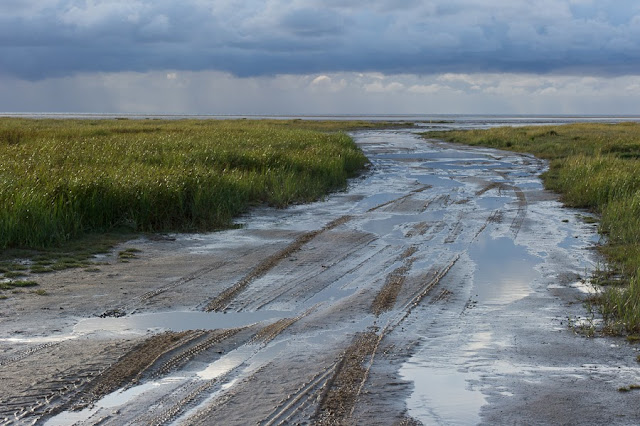 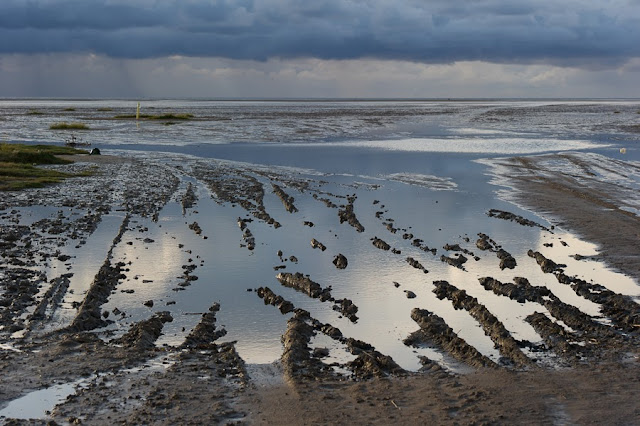 There is nothing along the coastline until the Lakeland Fells in the north and the Welsh Mountains in the south. The only thing that breaks the horizon is the gas rig. Unsurprisingly this gets photographed regularly by all and sundry. Myself included. Until now I've not managed to make a picture of it that has been much more than a silhouette against a sunset. The temptation is to make the rig as large as possible in the frame. I think this picture is more successful because the rig is small, but readable, and it is placed in the context of it's location rather than isolated as a shape against a sunset. In that case the sunset is really the subject. Here the whole scene is the subject. The rays of light just happened to appear in the vicinity of the rig, making it more of a focal point. While there might not be much going on in the foreground there is sufficient to hint that people traverse the marshy land. This is not a romanticised landscape in the way the lake pictures are intended to be. But it's still a subjective image because of the way I chose to frame it, what I included, gave prominence to and omitted. 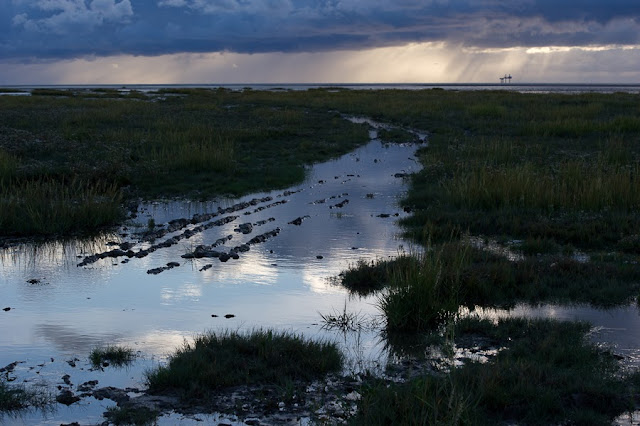