Flat, un-scenic, landscape is difficult to photograph. Not least when so much of it looks the same. Some would say boring. If it's boring then make boring pictures of it instead of trying to make 'interesting' pictures. This is my excuse for adopting a very similar viewpoint and framing for a lot of my meanygate pictures of the farmed land. The horizon is kept high, and the land is the main subject. Maybe if the skies weren't so uniformly blue recently that might have been different. I might have been tempted to make the sky the focus of the pictures.

As it turns out I'm liking the repetitive  nature of the pictures as a series builds. 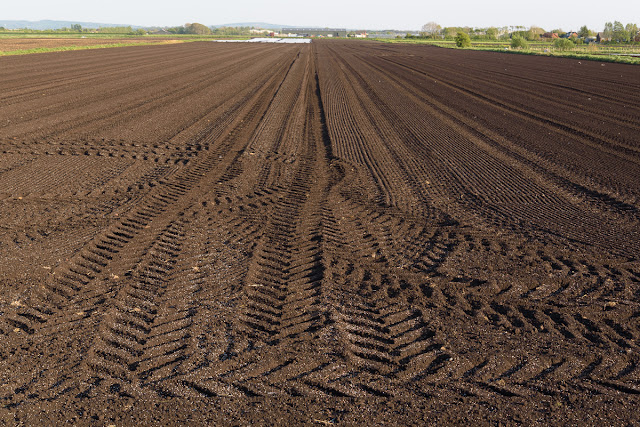 The main things which break up the flatness are the ditches, tracks and pylons crossing the moss. Again I prefer to centralise these features. 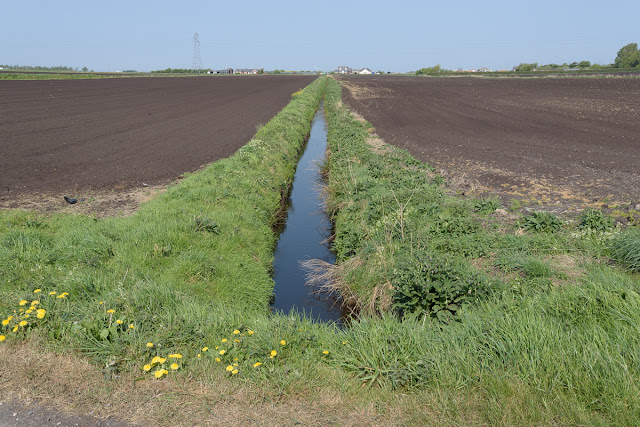 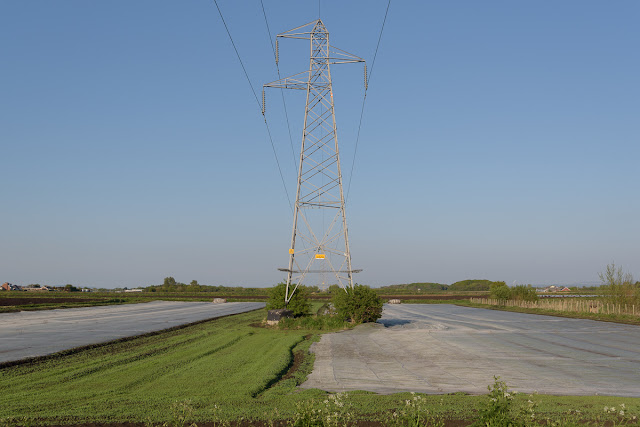 Here and there are buildings. Some houses, mostly bungalows, barns and suchlike. After trying out angled views I once more found the straight on shots seemed more fitting. 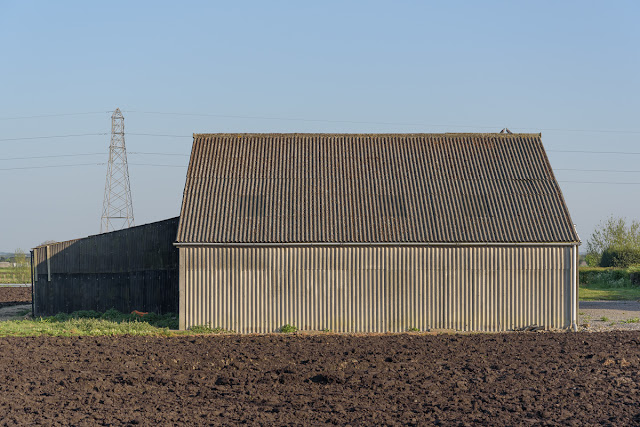 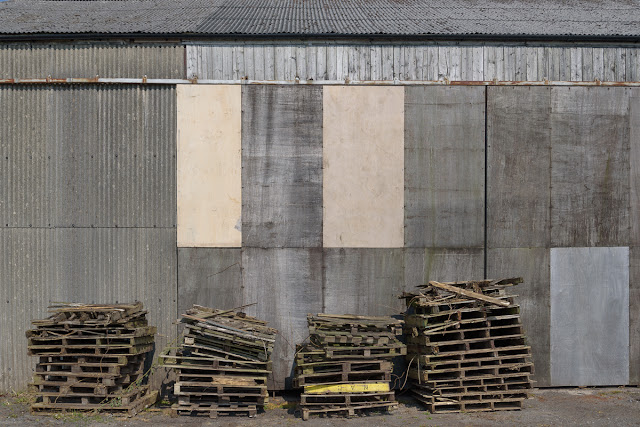 Something that these wanderings at different times of the day have made me more aware of than usual is the direction of light. I see pictures which frame well, but don't work because something is in shade which needs to be lit. That said, I am still not a fan of early or late light for a lot of pictures. Apart from making for dark shadows it can make the pictures a bit too 'interesting' and become the subject itself.

When I saw the old Massey Ferguson chain harrowing the dry soil it felt like there was a picture to be made. The problem being that the backlighting which made the dust apparent put the red tractor in shade. You can't always have it all! Some fiddling on the computer made something of it. 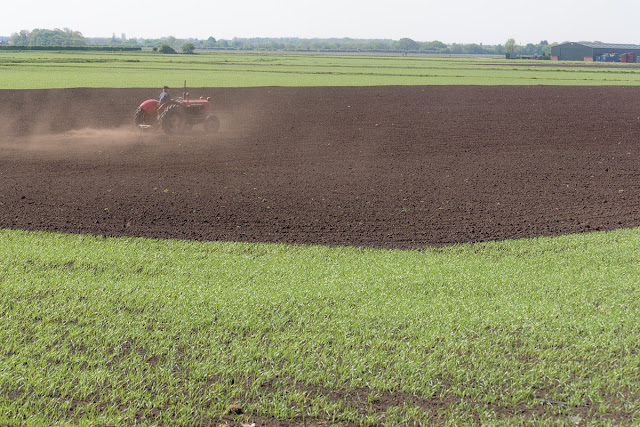 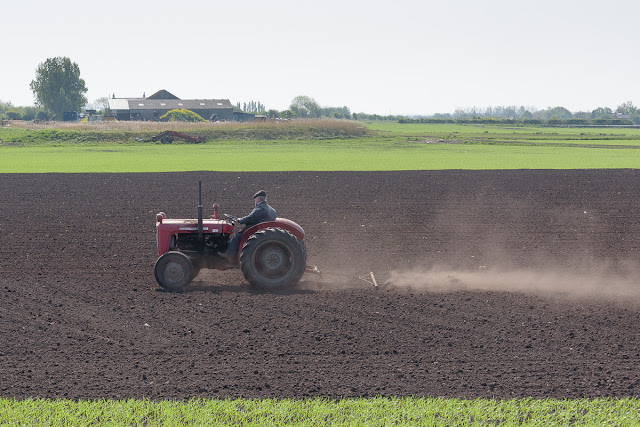 As well as small scale farming on the moss there are larger concerns operating on a more industrialised basis. Their modern units provide a counterpoint to the more ramshackle outbuildings of the smaller farms. 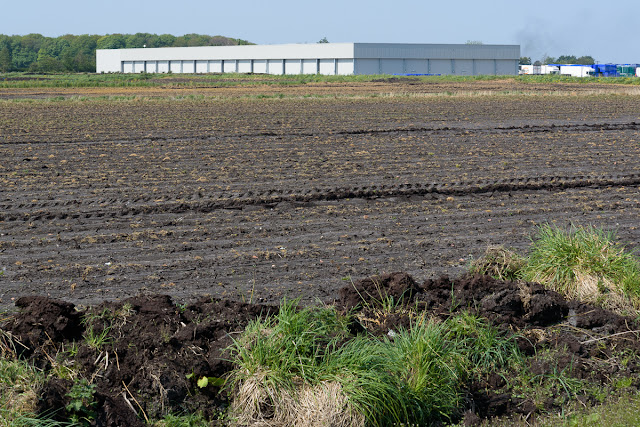 Covering the same ground can lead to familiarity, but every now and then I take a second look at something. The pile of ploughed up tree remains which I photographed the other day being a case in point. The picture below works in a different way to my first attempt. I don't think either is better than the other as they tell different stories. 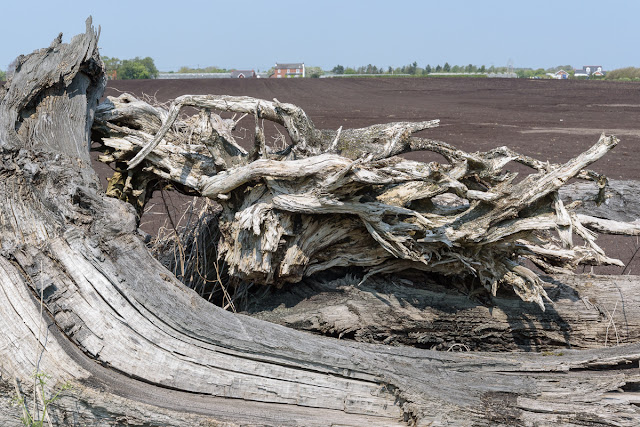 The weather is set to change and revert to normal spring conditions. Maybe this will provide a change of look to the moss and my pictures?

Not long after my previous post the zines started to arrive and soon the collection was complete. I felt that mine was rather letting the side down in terms of photography. My 'get out' is that it was a conceptual project! Already plans are being hatched for a second 'zine challenge'. 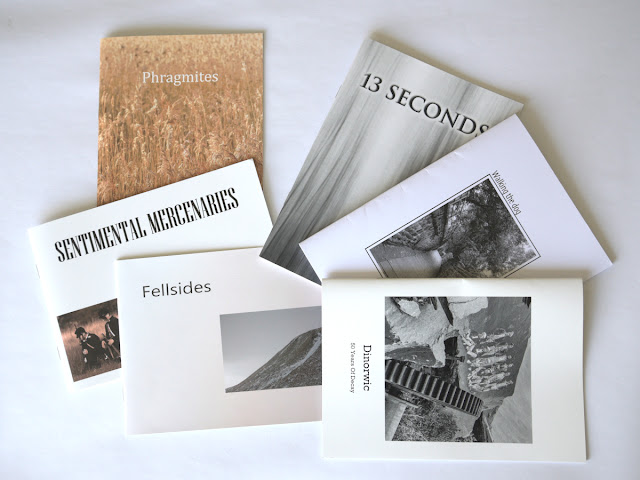 With all sheep dog trials cancelled for the foreseeable future and auction marts off-limits to anyone except buyers (even vendors can only stay as long as it takes to offload their beasts, and that without leaving their vehicle) and social distancing practically eliminating communication with strangers, it's been a case of hunting around the garden for 'wildlife' subjects or looking for 'landscape' pictures during my daily exercise walks.

Garden wildlife soon gets boring when there's no real point to it. No point I can get enthused about at any rate. The only highlight has been rediscovering how good my fishing camera can be for close up photography when the light is good enough. Even a crop of the 12mp file looks pretty detailed. A shame that the direction control on the camera is flaky and making it difficult to operate at times. 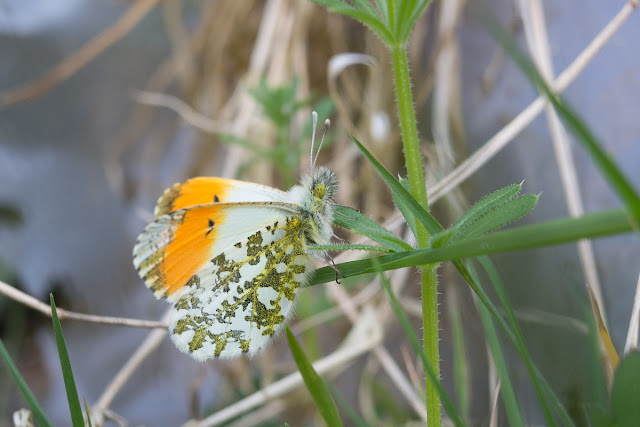 That meant it was landscape or nothing. Having more spare time available for a daily walk, work having dried up, I was going further than I usually do and covering fresh ground. After a few walks in new country I found myself photographing to a theme. Not a totally new theme, but with a tighter focus. The flat, farmed landscape of the mosses. One moss in particular criss-crossed by arrow straight single track lanes known as 'meanygates'. And so the meanygate project has commenced. How long I'll stick with it is the usual imponderable.

I hope it will be part straight recording things as they are including detail pictures, but also with a formal edge to some pictures. I am already collecting a few pictures which might make a series within the project. 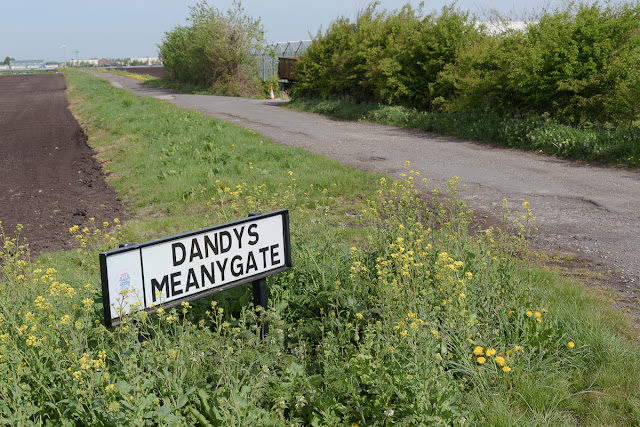 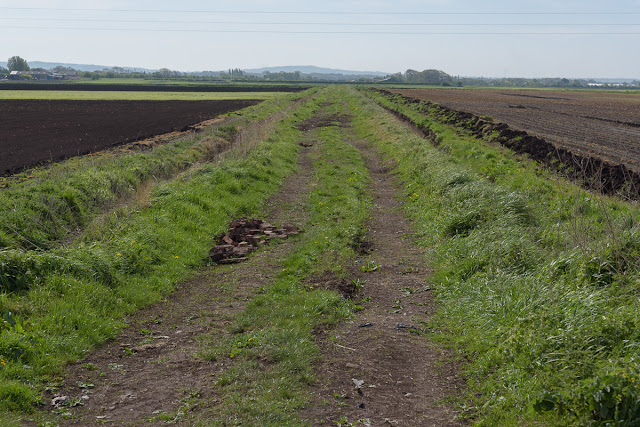 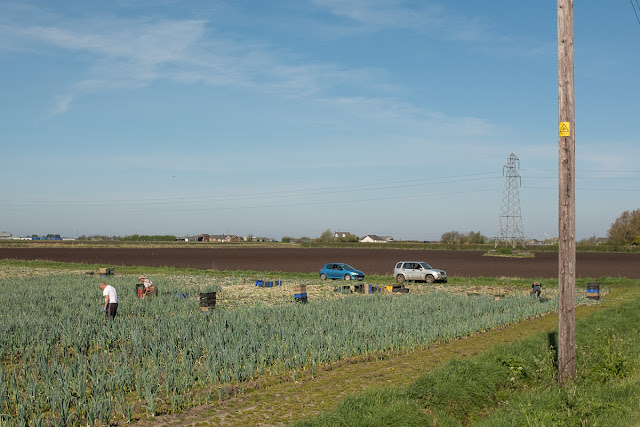 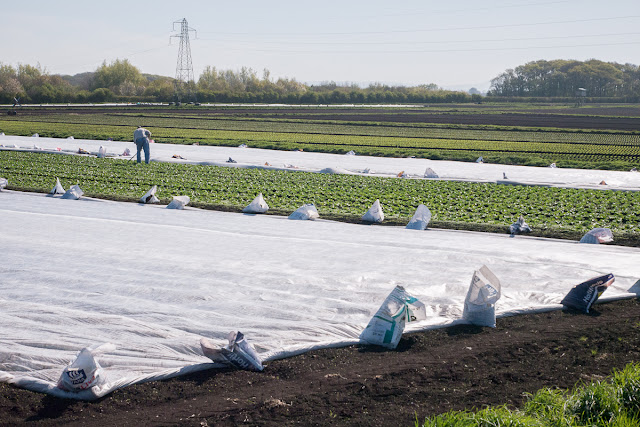 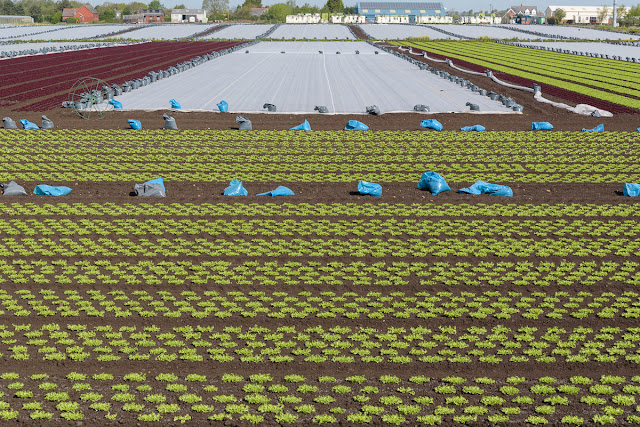 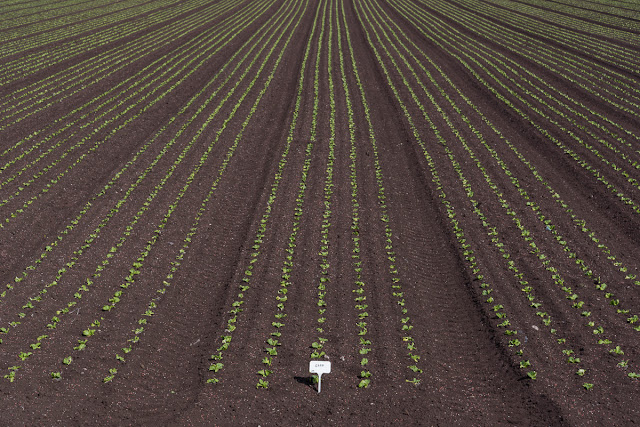 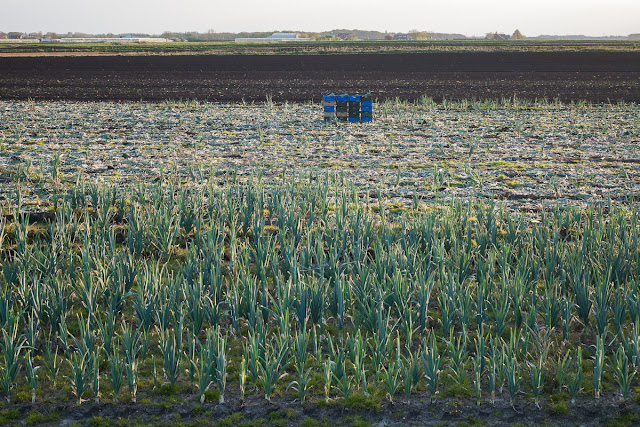 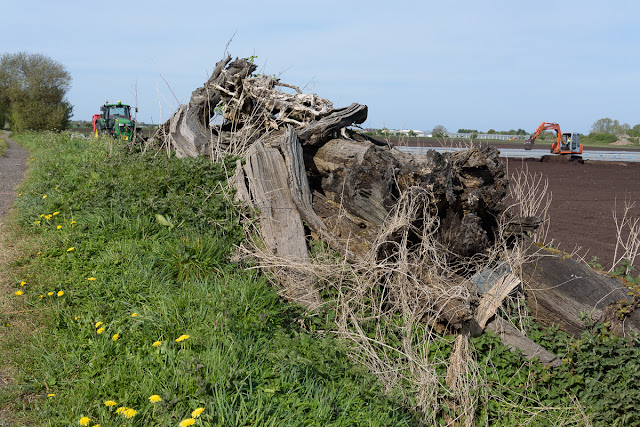 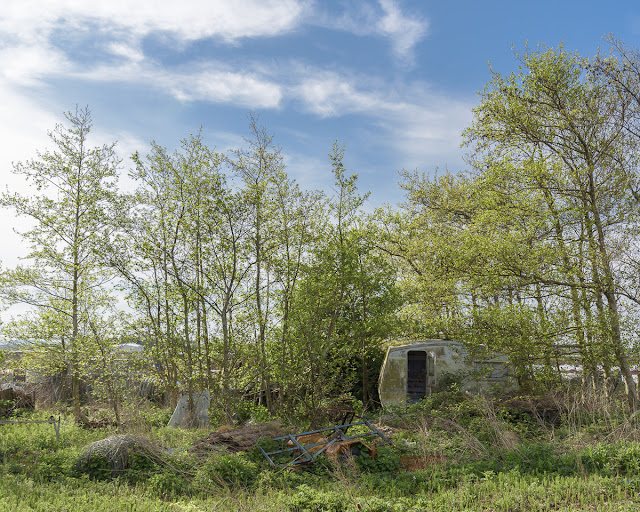 Being restricted to where you can go forces you to look harder. It's the old cliché that having limited options expands possibilities. How long it will be before the initial freshness becomes stale remains to be seen. But there might be more possibilities than I imagine.

From a technical perspective I started off using pocketable cameras. The Fuji worked OK, except the focal length was a bit restrictive. I almost got to thinking that it could become my staple camera for the project with the longer lens adaptor fitted. That didn't last long as I soon had the same frustrations I've had with it before. All it needs to do is focus faster and I could live with it, but...

The Panasonic I bought to replace my fishing compact with the dodgy selector fared no better. The controls are annoying, the viewfinder horrible, and the files continue to lack something. I reverted to type and took the big camera out with it's consumer standard zoom attached. Apart from curving the horizon when used wide (easily correctable on the PC) it does a perfectly acceptable job during daylight hours outdoors. f5.6 and be there works for me unless I need more depth of field. Even at f6.3 I find the out of focus areas look nice enough. 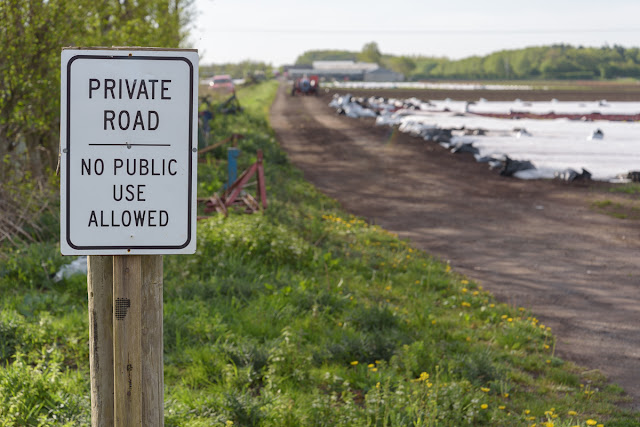 In January 2020 I posted a thread about making books and zines on Talk Photography forum, which lead to someone else starting a zine swap thread. I originally intended to make a zine using some of my poultry photographs, but that fell by the wayside when I read the suggested page count for the zines. I decided to do a project specifically for the thread challenge, having in mind a series of night time black and white pictures. As usual my plan changed yet again!

It was taking photographs of reeds that got me thinking about, and shooting specifically for, a set of pictures to be presented in a small (16 page - including cover) zine.

My initial efforts were all quite random in style as I worked out both what I wanted to show and how to show it. Pictures were sorted in Lightroom and an initial selection made. 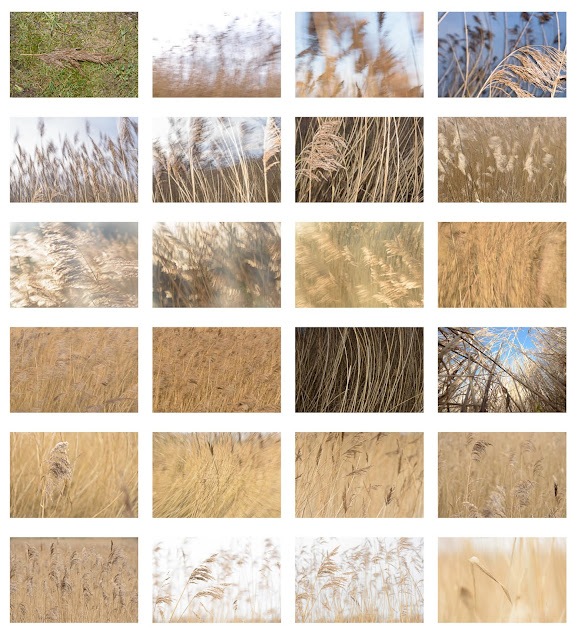 The next step was to take the pictures into a publishing application. As it was a small zine I used OpenOffice which I have used before so know my way around. However it tends to freeze with larger numbers of images. Sixteen pages would be OK.

The images outputted from Lightroom were made in the print module at the size of the proposed zine - A5 portrait. This was where I played around with page layouts. I have a habit of embracing random acts when it comes to designing things and when I set the images to a square format I liked the look of them on the page. This lead me to crop all my selected pictures to a square. Not all of them worked when cropped and I also saw that there wasn't a consistent look to the pictures. Regardless of that I then made a dummy copy of the zine on my desktop printer, in black and white, just to get an idea of what the layout would look like. 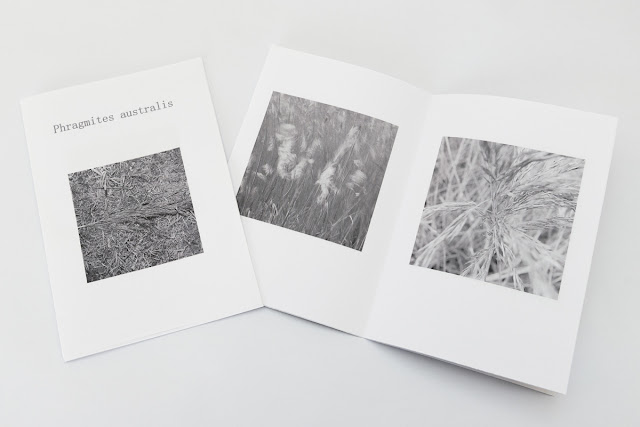 With that done I went back to take more pictures which would fit my new vision for the series. This was to eliminate the sky from the pictures, to think in terms of squares, and to keep the colour palette limited. A couple more visits gave me a new selection of pictures to select from. These I laid out in a virtual contact sheet where I edited them down, crossing out the rejects, circling the probables and leaving the maybes unmarked. 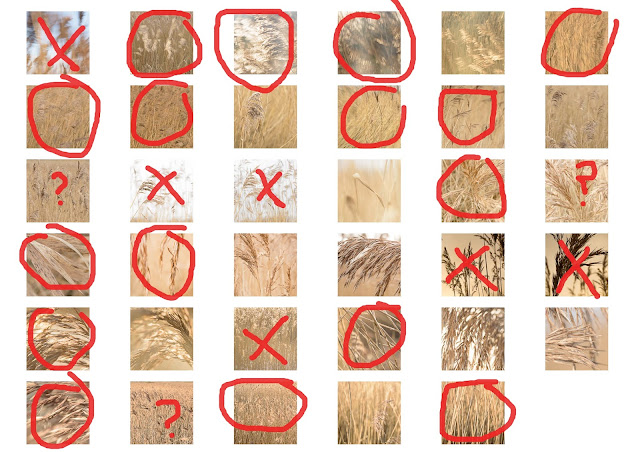 Returning to the publishing software I sorted through the sequencing and changed the cover design and project title. Another black and white dummy was made. Satisfied that I was getting somewhere I made a colour dummy.

This was the stage where I left the project to simmer. It's always a good idea to step away for a while. I find it stops the inevitable tinkering that happens when a project is almost complete. The break also allows you to come back to things with clearer eyes.

Refreshed I made some alterations to the sequencing and added a few words of text to the inside front cover. I also thought that this could become a bigger project looking at reedbeds through the year, or at least in summer as well as winter. I added a subtitle to the cover and made a fourth dummy. 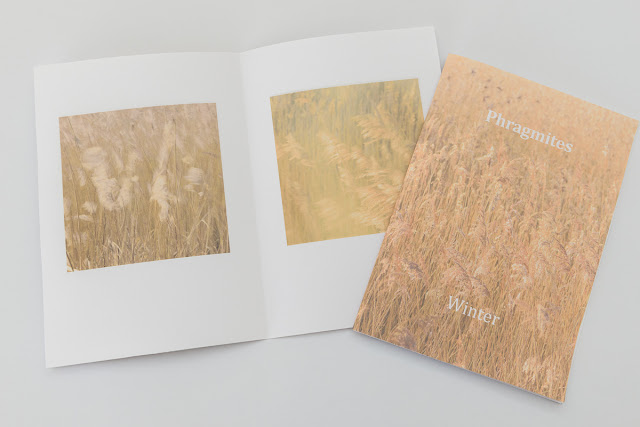 After a couple of days I knew that the other parts of a bigger project were unlikely to happen and got rid of the subtitle. The zine was now ready for proof copies from on-line print services Doxdirect and Mixam. The Doxdirect proof was the full zine, including card cover, at full price. Mixam's was their 'free' (pay postage only) eight page (side) proof with no cover.

What the proofs would do was give me a chance to compare the print quality of each service and to see how the pictures reproduced in this print medium. 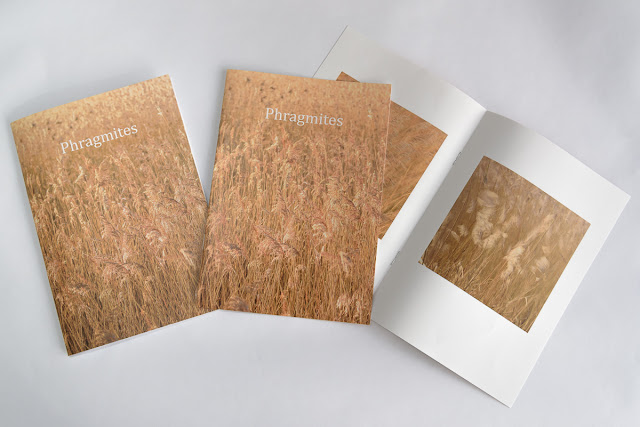 As far as reproduction quality went there was nothing in it. However Mixam's colours were a little closer to what I saw on my screen and outputted from my home printer. Both proofs showed up one picture which wasn't reproducing well and some which needed reprocessing. The odd picture out was ditched from the sequence and I went out to take some more in the hope one would take its place. I was successful. All that was left to do now was wait and see how many copies would be need printing to send out when the 'zine challenge' deadline was up.
Posted by Dave Lumb at 20:34