Photography is essentially a medium of selection. You choose where to point the camera, how to frame the shot and then pick which of any alternatives you've made is 'the one'. There usually is only one.

One way of approaching this is to make as many selections as possible while in front of the subject and then pare them down later. The odd thing is that 'the one' is frequently the first, or last, exposure made. In the first instance it is a case of the picture you have envisaged has manifested itself, immediately and fully formed, through the subconscious. Subsequent attempts are searches for an improvement against the odds. In the latter case the picture hasn't been formed in the mind's eye and has to be worked at to be brought to a conclusion. Frequently this leads nowhere, or to a less than satisfying conclusion.

The ability to shoot an almost limitless number of options to a memory card is both a boon and a curse. It can ensure that the one good shot is made, but it can make finding it more difficult. Hiding the wood in the trees. Does it also make the lazy substitute shutter operations for seeing?

With the weather continuing chilly there is the benefit of clear skies and bright sunshine. Frost and ice brings with it the temptation to succumb to cliché. It's hard to resist because it the clichés are so appealing. So I gave in. 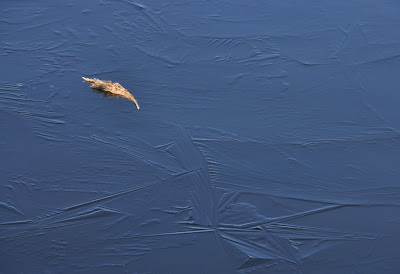 Trying to see something different I eliminated the obvious subject matter of the feathery seed heads and shot the stems of the phragmites. If there's an influence it's probably abstract expressionism. But maybe that's just me being pretentious. 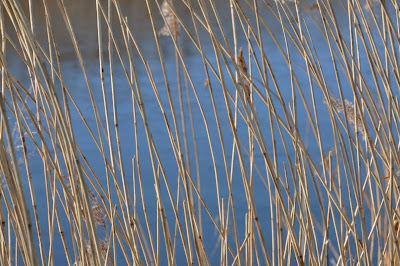