More sunshine and back to the wood to try the tripod out in earnest. One thing is for sure it demands a different mindset to shooting handheld. The whole process is slowed down, mentally and practically, but with a flexible tripod not by too much. It is changed though. The biggest drawback is trying to respond when the light is changing quickly. The trade off for smaller apertures and a steady platform. 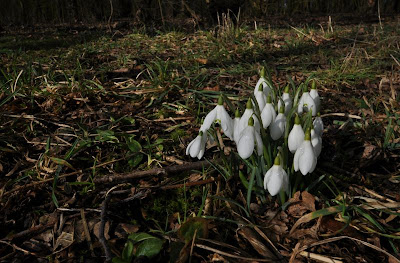 The other night I was reading some photo website that suggested the addition of a UV filter for lens protection was all a big con by the trade and their actual benefit was nil. Having managed to let my camera slide lens first into leaf-mould before I'd tightened the tripod's centre column while setting it low to photograph snowdrops, I reckon it's money well spent. No harm was done, but it easily could have been.

The dappled light in the wood made it difficult for the camera to get a satisfactory exposure and yet again I found myself forcing it to underexpose. All part of the re-learning curve, and so much easier to achieve with a DSLR than a compact or bridge camera. 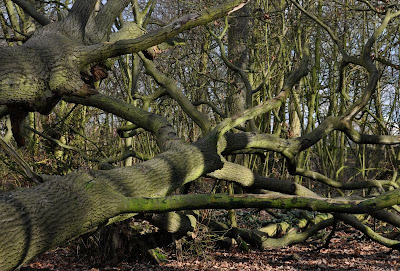 Two more locations were searched one without much satisfaction the other in fickle light - but both with inspiration for the future.