The fat lady has yet to sing

With warm sunshine forecast to disappear in mid afternoon I left it a bit late to head north in search, obtusely, of southern hawkers. My delay was caused by a family of coal tits hanging around in the garden visiting my hemp-filled seed feeder and one of them discovering the niger seeds I'd placed in a teasel head that I had stuck in the ground hoping to get goldfinches in a picturesque pose.

First off I took my camera in the garage while I did some work, and when the coal tit landed on the teasel I stopped work and did my best with the lens available. 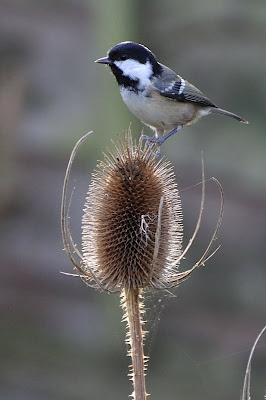 With the work finished and the coal tits still around and not disturbed by me moving around the garden I set up the tripod and remote release, pre-focussing the 70-300VR on the seed feeder. Not all the shots were in focus - the feeder swings as the birds alight. A couple were both in focus and showing the bird with its head out of the feeder! For a first and brief effort I was quite happy with the results. 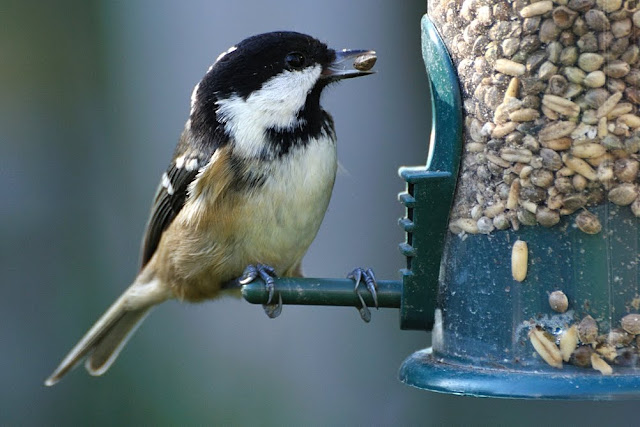 Setting off around ten I would be at the dragonfly site well before lunchtime if all went to plan. It didn't. I hit a traffic jam and after a u-turn and following an alternative route I hit another. I hadn't even reached the motorway. When I did I was lucky not to turn down the slip road, which was solid like the motorway. Not being too far away from, and heading in the right direction to, a disused quarry I went there for a mooch.

The hoped for peregrines weren't in evidence. Not visually. There were some raptor-like calls echoing round the cliffs, but nothing I could pinpoint. The usual jackdaws were there in numbers, and the pair of ravens. On the water were three or four dabchicks among the coots and mallards. Standing high on the cliff looking down into the clear water it was fun to see the little grebes diving and swimming out of sight in their search for food. So high above them was I that even at 300 the lens was pretty useless to capture these small birds. A longer lens and a polariser might get some interesting results on a sunny day though.

Other bird life seen were jays, and heard were numerous tits in the birch scrub. There were plenty of toadstools around, most having been chomped by slugs or well past their best. I spent a few minutes trying to get a decent pic of a small clump, but a tripod would have been beneficial even with flash. Fungi are more difficult than birds to photograph! 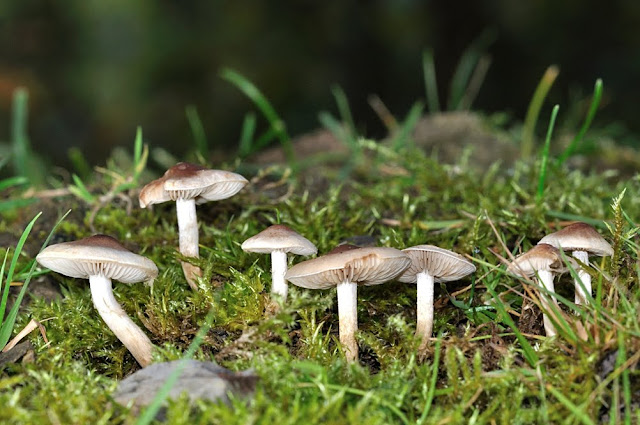 Given the location it seemed a good idea to take the short drive to the hills and the hilltop quarry where the black darters live while the sun was still shining and warm enough to let me leave the sweatshirt in the car.

The recent rain had changed things up there. The small pool wasn't so small, and it was hard to get around with leaky boots on my feet! There were a fair few black darters around, but all in the rushes that had been dry last time I was there, and not as many as earlier. The big pool was a different matter. Far fewer darters, a couple of emerald damsels, and some hawkers. There were at least two common hawkers laying eggs in the marginal rushes. A tricky place to try and photograph them from dry land. A pair of waders would allow a better angle, but being in the water might prove more likely to spook the hawkers. They are spooky enough.

My first efforts were with the 70-300VR, but I wasn't happy with them, and at one stage a hawker came far too close for me to focus on it. The Sigma 70-300 would have been okay. You can't have everything.

It was fascinating watching the dragonfly at such close quarters, twisting its abdomen into all sorts of shapes as it sought out stems to insert its eggs into. Once they are in that mode they become more approachable, but sudden movements make them fly off.

I switched to the macro lens and flash set up, hoping I could get another chance at a real close look. I wasn't quite so fortunate, but I did get some shots where the hawker wasn't partially obscured by juncus. I also got a very wet foot as I inched close enough. A small price to pay. 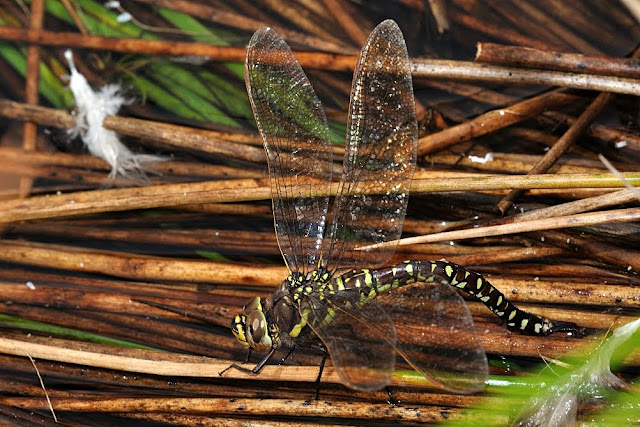 Activity slowed and I called it quits. On my way home the sky began to turn grey and the rain wasn't far behind. More rain and cooler temperatures are supposed to set in. The fat lady may sing this week after all.