Rules and how to break them

The technology packed into modern cameras makes getting perfect exposure pretty easy. You can read up on all the rules for making 'correct' exposures and apply them to the display on the back of a digital camera. Far simpler than the days of film. The display will even blink to show you where you have over-exposed and burned out the highlights. That's all well and good for 'average' scenes. But there are times when the exposure can't be got right for the entire scene.

I spend a windy weekend photographing kite boarders, and at one point when the sun was low in the sky trying to compensate when shooting into the light was impossible. So I worked with what I'd got and chose to blow the highlight big time, which needed very little work on the PC (conversion to black and white and levels adjustment) to get the contrasty graphic look I was after. 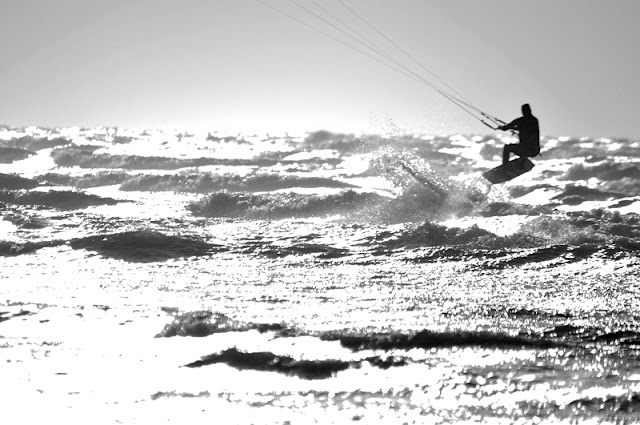 Shooting action like this is a whole new learning experience for me. Maintaining focus on fast moving subjects, keeping them in the right place in the frame and using the zoom while doing so is vastly different to photographing birds on sticks! My hat goes off to anyone who does this sort of thing for a living.

It's a test of the camera and lens too. I got a much better success rate with the fast 70-200 on day one, but the reach of the 150-500 was more suited to the job on day two.  I reckon Nikon's 200-400 would be ideal, but it would be an expensive luxury. Again digital makes it much easier. I made over 1200 exposures over the weekend and got less than a 10% hit rate of shots that were in focus, well framed and captured the action well. If I'd been shooting film I'd be skint, and probably disappointed.