There appears to be a school of thought on the infernalweb that small cameras are the way forward. People seem sick of great big heavy DSLRS. I can see the point in this argument. SLR cameras have got larger and larger as they have become more and more automated. My ancianet Pentax ME is not much larger than my 6.3mp bridge camera, and way smaller than my full frame digital. For unobtrusive shooting the Pentax attracts a lot less attention. It also weighs a lot less and as such is less of a pain to carry around.

Another part of the argument in favour of small upmarket digital cameras is that most images these days don't need the resolution of large sensor cameras. They'll either be viewed on screens, or printed fairly small. This makes sense, my 6.3mp Canon bridge camera did me proud when I was writing regularly for fishing magazines it (as did it's 3.2mp Fuji predecessor). Double page spreads and cover shots looked fine to me. But comparing the images it produces with a crop sensor DSLR's output makes them look awful. Lack of contrast, noise at anything over base ISO. A general lack of flexibility. What's more the handling of the camera is clunky compared to a DSLR.

It was the handling that saw me always using it in either Auto or Program modes. Aperture and shutter priority modes are available, but involve the use of on-screen (or in-viewfinder) menus. Very frustrating.  There are also buttons that were so easily pressed by mistake that the quality of the jpegs and the ISO settings could be altered without my knowledge. I'd have the camera set to the highest quality only to find the pictures were taken at a lower resolution. Bloody annoying.

After weighing the camera bag I took fishing the other day I'm considering another small 'compact' camera to take with me on those days a long walk is involved. I can't face using the Canon any longer - DSLRs have spoiled me! All I ask for is a small camera with easy shutter and aperture adjustment that produces images as good as a crop sensor DSLR. That can't be much to ask? I also demand a viewfinder for framing. I have a compact camera that lacks a viewfinder and absolutely hate holding it with both hands to frame shots on the screen. It's a poor way to hold a camera steady too. 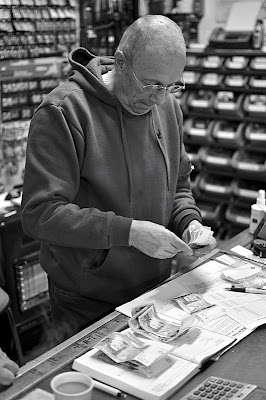 Not only would a lightweight camera be useful to take fishing, a discreet one would be handy in town, and nice to cart around anywhere just in case. So, tomorrow I intend going out to look at some small cameras. I have three in mind - although I'm already pretty sure which one is most likely to part me from my cash. I'm taking a couple of memory cards with me in the hope I'll be able to bring some files home to inspect.

Moving on. I'm well aware that it's possible to lose inspiration or motivation. To feel that what you are photographing has no worth. I feel that all the time. But I don't log on and ask people where I can find inspiration. As soon as I go out, or even stay home, with my eyes open I begin to see things that are visually interesting. The resulting photographs may not be marvellous, but they usually have something going for them. Of course it's nice to have a project to give a sense of purpose to your photography. And so it was this afternoon when I called in at my local tackle shop.

I visit almost every week yet I still find fresh things to photograph. Not every time, but often enough. I'm a little hampered in my efforts to capture the proprietor as he has an aversion to cameras, but I'll get a good shot or two of him eventually. The shot here shows him doing what he likes doing best. Counting money! More from today have been added to the Tackle Shop page.