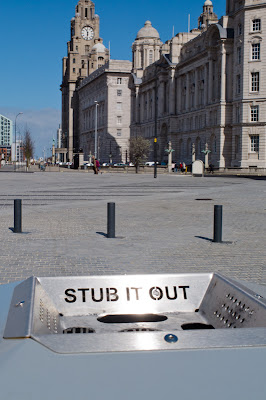 Having to venture to Liverpool today I took the chance for a flying visit to the Open Eye Gallery to check out the two current exhibitions. What I'd read about the Richard Mosse show on the BBC photography pages didn't fill me with hope. It all sounded a bit pretentious. As with the Mitch Epstein exhibition, however, the pictures were different in reality than seen virtually on the web. This is something I'm coming to realise more and more. That physical photographs, actual prints or printed on a page, give a better feeling for what photographs are about than images on a screen do. Some of the prints were very large, the others just averagely large. This also altered how hey were experienced.

I've always though that using infra-red film is a bit of a gimmick, and still do, but the effect it had for the subject matter was in stark contrast to the images in the other exhibition. Simon Norfolk's carefully crafted prints of subjects relating to genocide beautified the images which in turn distanced them pictures from what was being pictured. The inra-red film had the opposite effect. By taking away our preconceptions of what things look like it brought the subject to the fore. I'll be going for another, longer, look when I get a chance.

One my way to and from the gallery I made a few pictures of my own. Although I prefer being in the countryside I much prefer taking photographs in the urban environment. The straight lines make it easier for me to find compositions. The natural world is all too amorphous for me, especially when the vegetation is lush and green. In winter the colours are muted and there are more clearly defined shapes from bare trees and the like.

So it was on this sunny morning I found myself framing architecture and shadows, along with a few more for the Stub It Out series. I was using the X10 again, and again being frustrated by my inability to easily frame accurately with the thing. The focus/shutter lag also lost me a couple of shots again. I must keep in mind that the camera is only a compact. It's a shame it doesn't handle like an SLR as the files really are fantastic, and it's so small and light.

If I had been properly ruthless in the editing of the selection in the gallery from today's wander there'd be two less. But it's not important in the grand scheme of things. Larger here.