Being densely wooded with spindly birch trees the quarry is another challenging place to photograph. With some afternoon sunshine today things became a little easier. It still surprises me how many frames you have to expose to get a handful of reasonable pictures. The disparity between what you see and what the camera sees can be immense.

I think there are two sorts of picture to be made in the quarry. For a while now I've been thinking of making pairs of photographs. One showing a detail which has caught my eye and which makes a picture, and another wider view that puts the detail in its place. Not necessarily with the detail obvious in the frame. Unconsciously I did this today. I started taking some wide shots, same a detail and homed in on it gradually getting closer. The intermediate frames sort of worked on their own, but editing the shots on the computer it felt as if the wide and the detail complimented each other. 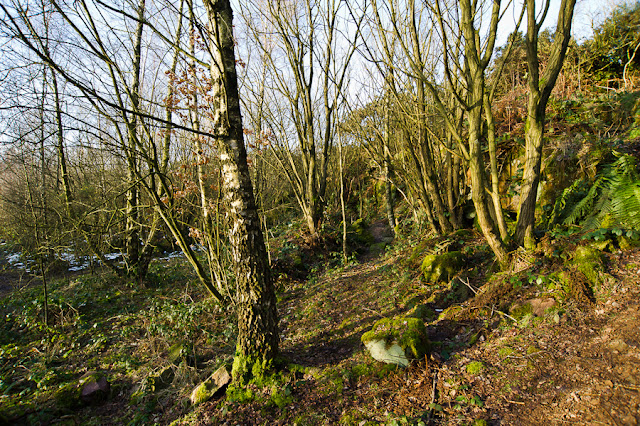 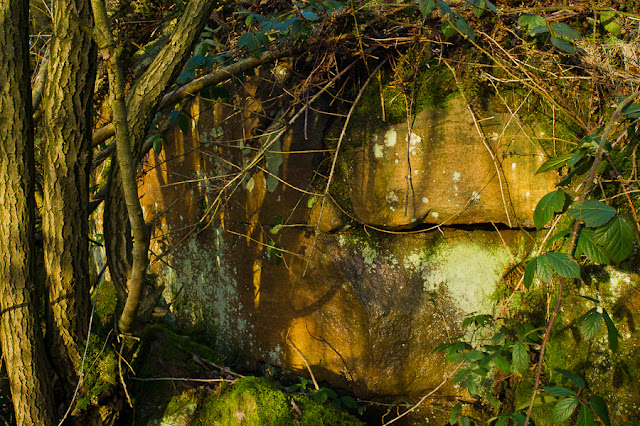 More and more I am moving away from the idea of making single, stand alone, pictures when it comes to depicting environments. We are aware of our surroundings, but we notice the small things. The two ways of experiencing the world around us are linked. It's reasonable to link images in the same way.

That said I was still trying to capture the environment's feel in single pictures. With the sunlight and snow still on the ground it was easier to see the structure under the crowded clutter of branches and the uniform green of the moss which covers rock and wood. 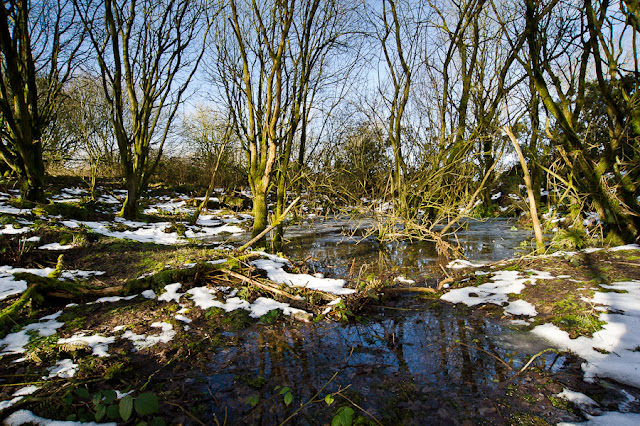 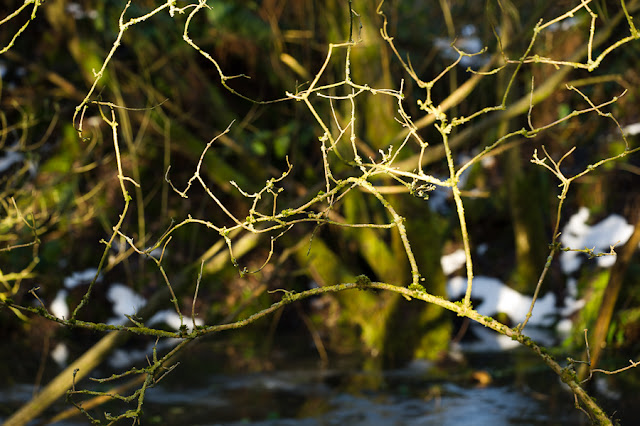 It was only on the computer that I realised I had made another 'pair' of pictures. It's as if the two above are telling the same story in different ways. Looking at them posted one above the other I also see they share a subtle compositional element of intersecting diagonals.

In the confines of the quarry the 3:2 ratio felt more appropriate. More suited to depicting how you feel surrounded by either trees or rock depending on where you are. If I could make good panoramics I'm sure they would work well in conveying the sense of enclosure I feel in the quarry. I played around with the fisheye in an attempt to achieve that, but without much success. There could be places where it would work well. In among the dense gorse for example. Or possibly when the leaves are on the trees making an overarching canopy.

On a technical note today was revealing. I was using two cameras, one full frame one crop. No matter which lens I put on which camera I felt more comfortable using the full frame. Both in the field of view and the rendering of the image in terms of depth of focus. Even when stopped down there is a more natural look to the images. This is something that is even more apparent when I compare them to those from a smaller sensor. As sharp, detailed and noise free as the files are from my X10 they look artificial. Almost hyper-real. There's something I can't put my finger on that jars. Maybe its the way tonal gradations are rendered, maybe it is the depth of focus, or a combination of factors. I see the same in other people's photographs from the camera, so it isn't the way I'm processing the files. Big and heavy full frame cameras may be, but it's the pictures that matter. Looks like I'm stuck with carting a big lump around with me.