Out of my depth

I did indeed return to the river on Sunday, armed with all the stuff you're supposed to use for landscape photography. Tripod, remote release, polariser and graduated filter. I took my time picking a viewpoint for each scene. Carefully set up the aperture and focus point. Used the virtual horizon to ensure everything was level. And got a right load of rubbish. Even in comparison to the snaps I took on Saturday.


The only aspect of interest being how I chose different viewpoints of the same scenes. Which is one of the reasons for visiting locations multiple times. Maybe our moods affect how we perceive things, or maybe it's the light. In the case above the river level had dropped a little, exposing some gravel. Perhaps that affected my thinking?

Something I did notice on reviewing the rubbishy pictures on the computer was how the neutral grad filter was making them have the sort of look you see in the how-to-take-landsacpes articles. I didn't like it. I was also struck by how the filter affects things like trees which stick up above the horizon. They have a noticeable change in exposure form top to bottom, which looks unnatural - because it is. The grad I think I shall reserve for seascapes. The polariser is much more useful. The effect it makes on water is quite dramatic and can alter a composition to a surprising degree.  Although it can also look obvious in some shots. 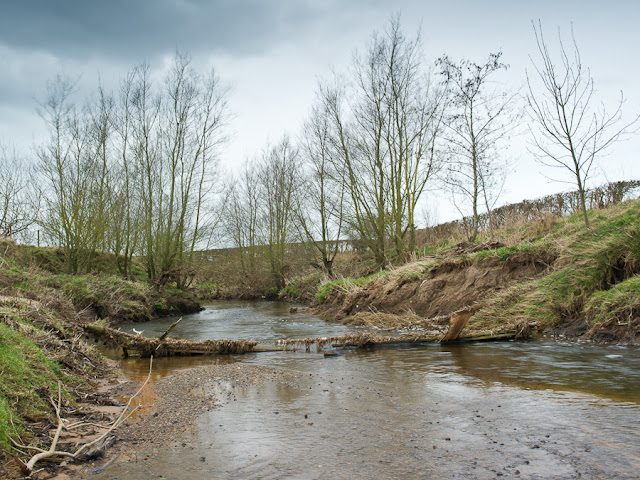 The river project has been abandoned before it started. Not so much through this struggle with making landscape photographs, but more because I wandered further downstream and realised I had forgotten how inaccessible the river gets. 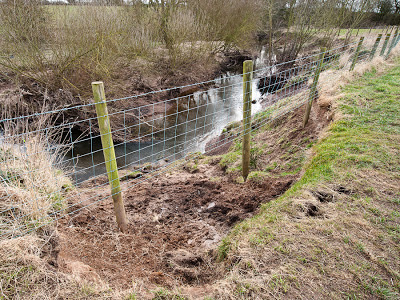 At the top of the length it is still just about in hill country. The gravel runs are an indicator of this. Access to the river itself is reasonably easy. A few hundred yards lower and it begins to enter the floodplain. Here it cuts deeper into the clays and silts making for steep, crumbling, banks. These have been fenced off to prevent erosion by livestock, and planted in places to naturally reinforce the banks. These attempts to maintain the river's course are, of course, futile. Some of the planted trees have already toppled into the water. If I do return to the river it is likely to be to try and record the effects of erosion in a more effective way than the shot on the right does. I suppose this ties in with my fascination with the way nature always comes out on top in the end - as it has done at the quarry, and would do at the sandplant if left to its own devices.

Apart from adding two more pictures to my ongoing Lost Ball series (which I have decided will end when I reach ball number 200), the only picture I came away with of any real interest to me was the one below of a sheep. Quite what appeals to me in this one I'm not sure. But if I have a style it fits better than the more traditional landscapes I attempted. If there's a lesson from this it is perhaps to make the photographs you see instinctively rather than the ones you think you should be seeing. 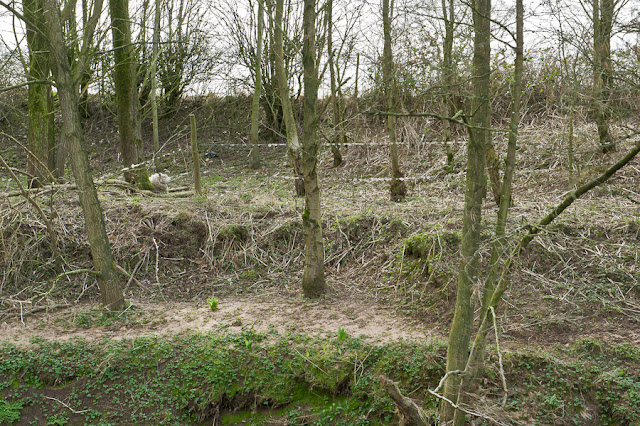