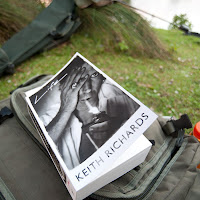 This weekend I've been reading Keith Richards's autobiography, Life. In amongst the Spinal Tap excesses there are a few passages in which he relates how the Glimmer Twins did their song writing which give an insight into their creative process.

Having been embroiled in an argument about how to get out of a period of being 'stuck' in photography in which my adversary was insisting that you have to work out exactly what you want to achieve in advance of taking the photographs, while I was insisting that going out and shooting any old crap without having a plan was the way forward, I found Keef's songwriting method refreshing. Songs would start with a riff, a chord sequence, a line or two or just a title. Often the theme of the lyrics would change, as might the beat.

Elsewhere in Life are other clues about how to get good at guitar playing and songwriting. The main one being do it a lot. The other one is to listen to lots of music from different genres. In photographic terms this translates to take lots of pictures and look at lots of them. Soak it all in and it will filter out in unexpected ways.

For some time I've been wondering if there are two sorts of photographer: those who have to
be in complete control and those who take what comes and make something out of it. Some time ago on The Online Photographer someone was sort of denigrating 'stochastic' pictures as being a bit of a cheat. Pictures in which an element of control is taken away from the photographer. Unsurprisingly, I like having the element of chance in my photography.

There is a big difference between a lucky picture and one which has come about through chance. A lucky picture is when a 'plane falls from the sky in front of you and you have a camera in your hand. Chance, however, intervenes when you put yourself in a place where something you know can happen is likely to. Sports and wildlife photographers operate that way. They put themselves in the right place, and hope they are there at the right time when something interesting happens in a way that makes a great picture. You sue chance by eliminating as much luck as possible.

It's not knowing where you're going, or what you'll get, that intrigues me. Taking lots of photographs can, provided you are the sort of person who gets bored making the same picture over and over, lead to unexpected results. My first picture of a car and a plant was just a random shot, which I thought had something so I worked at it a bit. The wide angle lens and slow shutter speed to blur the car came from another picture I had taken some time earlier. Ideas come from ideas. 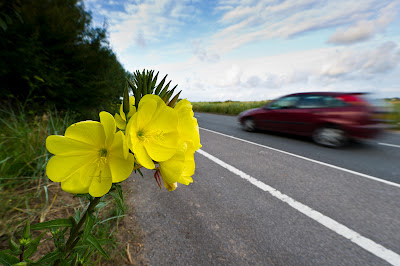 It looked a bit obvious, so I got in closer. 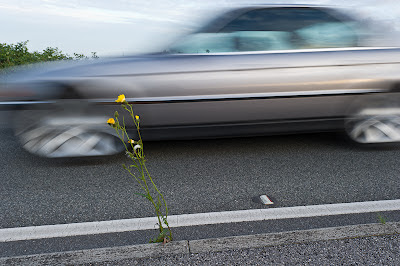 Twelve months later I was stuck for what to photograph and thought I'd revisit the theme, altering the viewpoint and using a slightly longer lens but still aiming for the environmental context. 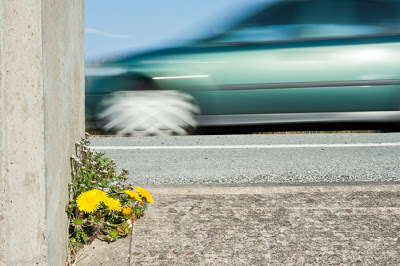 Next time I tried the telephoto I made more abstract compositions, still retaining enough information to suggest context, but camera shake ruined them. I tried again with a stabilised lens and better hand holding technique which did the trick. 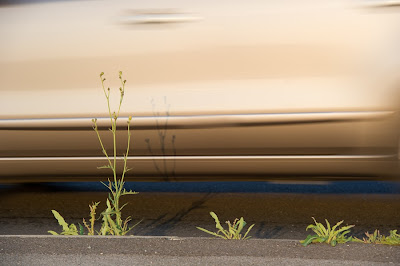 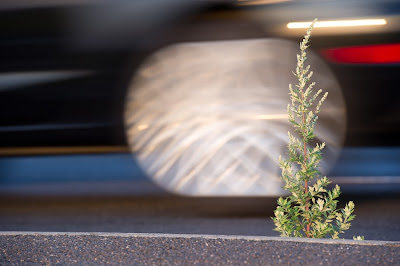 These pictures rely on a slow enough shutter speed to blur the cars but fast enough to freeze the plants which move from the draught of the vehicles passing by and any wind that's blowing. Using a tripod wouldn't prevent blur from air movement so I rely on a steady hand. The telephoto compresses space, but the further the camera is from the subject the slower the shutter speed has to be. It's a balancing act.

The only variations to be made from one angle are the plants and the cars. It would be simple enough to make a set of such pictures. However, knowing my boredom threshold, unsure how many combinations I can face making, I keep trying out other angles and thinking of other locations where different pictures on the same theme could be made. 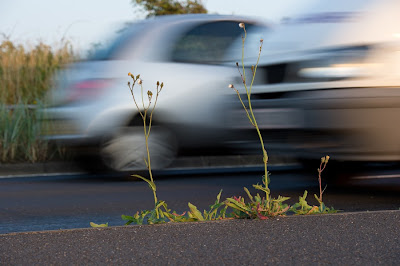