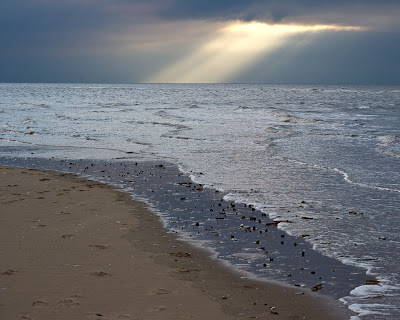 It's typical that when I get motivated to take photographs work conspires to stop me. I managed a few evening minutes by the sea the other day. I walked out to the incoming tide and by the time I reached it the clouds which had been making for 'interesting' light filled the sky in and flattened it.

The picture on the right doesn't seem to follow any of the common compositional rules that I can think of. It has elements of interest - the shaft of sunlight, the fragments of coal on the wet sand between drier sand and sea, the light on the water and the pattern of the wavelets. I'm not convinced those are enough, but there is something about the off balance composition that I do like. 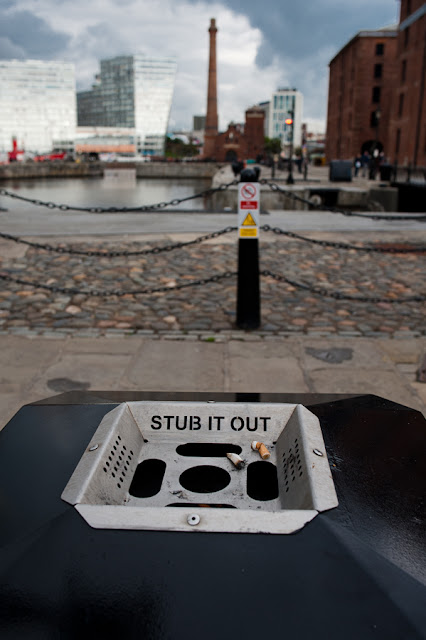 Today I had to take a trip to Liverpool. I managed to find enough time to pop to the Open Eye Gallery via the Albert Dock. This tourist attraction is a kind of Scouse-kitsch hell, with shops selling all manner of junk relating to The Fab Four and football teams. It's also where I photograph the ashtrays in the tops of litter bins. Don't ask me why!

The exhibition I was going to see was the Tim Hetherington show - but, not the video. I find that my mind wanders when watching moving pictures while stills hold my attention longer.

I left with the distinct feeling that a gallery isn't the right place to show documentary photographs of conflict, even ones relating obliquely to conflict. At least not in the way they were presented here.

Placing pictures in a gallery automatically dictates a way of looking at them, and confers expectations of 'art' upon them,stressing the formal qualities of the images over their content and context.


I had the impression that this was as much a curatorial exercise in hanging an exhibition in a modern way as an exhibition of photographs. I get the feeling that small galleries can sometimes be more interested in being at the cutting edge than they are in showing good work. Still, the prints weren't enormous - perhaps because of the graininess many of them exhibited than for any other reason. But there weren't enough of them for my liking. Much as I was glad I went to see the photographs I'd have preferred to look at (more of) them in a book. 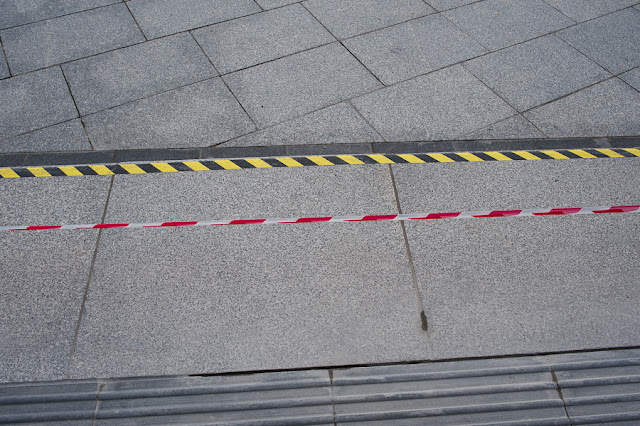