After the rain abated on Thursday I ventured out. I'd gone for a wander the day before and seen something I fancied photographing. A I set off there were slate grey skies and a rainbow.  The afternoon light would be right for the subject and the sky would make a great backdrop. Of course, by the time I had driven four miles everything had changed on the wind and I was faced with the usual overcast flatness.

There were breaks in the cloud and with patience I go the light I was hoping for - with a blue sky in the background. This would have worked well enough but despite over thirty shots only a couple got close to what I'd had in mind before the greyness set in for the rest of the day.

I'd thrown the X10 in my bag as I was intending to take some comparison shots with that and the DSLR. As things panned out I didn't bother, but I did take some landscape shots with the little camera. Once uploaded to the computer I simply didn't like the colours. Compared to the DSLR they just aren't as rich - even when both are shooting in the same light.

One regularly executed photographic trope among hobbyist photographers is that of the lone tree. I guess there's something psychological, metaphorical or symbolic going on with the choice of this subject. It's hard to resist in the same way that a sunset is. Rather than make the tree prominent in the frame I semi-obscured it and kept it slightly out of focus. I also included the two other solitary trees which happened to almost mirror each other in the distance, making for a kind of symmetry. 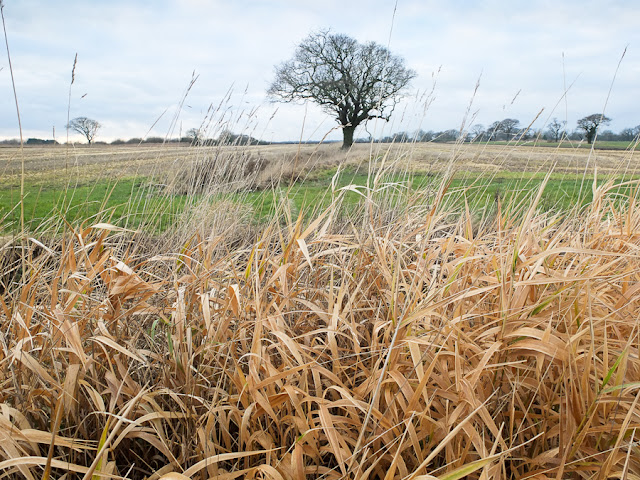 Although the colours are pleasing I think the black and white conversion works better, drawing attention to the trees more strongly than the colour version. 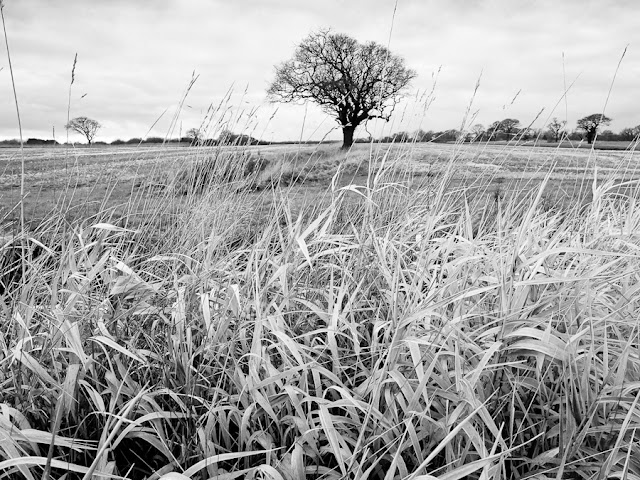 Friday was a day of rain and gales which I spent watching photography documentaries on YouTube. I was full of ideas and itching to get out again this morning as soon as the sun broke through. The plan was to park up near the sandplant and walk towards town. Again the weather changed my plans. There was a wall of grey rolling in over the sea, so I began to make a circuit of the plant, adding a couple or so shots to the project when the light slanted across the outer bund and finding a couple more balls for that series. Then the precipitation arrived. Rain followed by hail. I beat a retreat downwind towards the birdwatching hide where I could get shelter to dry the camera out and wait for the cloud to pass. As I crossed the road something made me grab a frame. Maybe the combination of hail and sunshine. There's something about it I'm liking at the moment. Even the wonky horizon seems right. 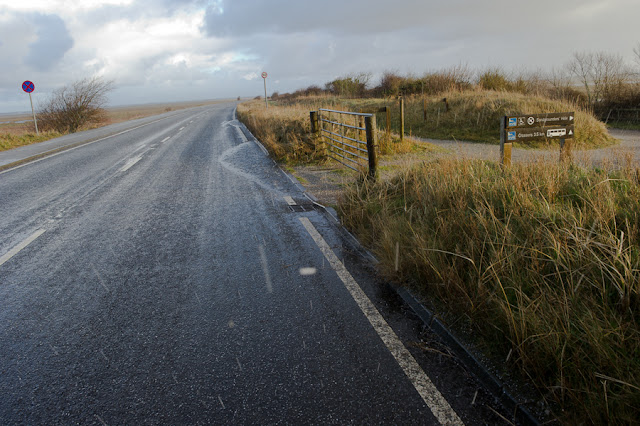 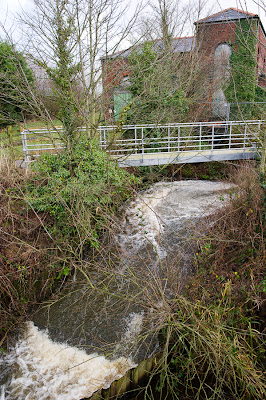 The hail turned back to rain but didn't make much of a job of passing over. When it eased I made my way back to the car and then home. Naturally enough the rain died away and the sun shone once more. A look out to the west suggested that was it for the day. After lunch I tried again heading out across the moss to the mere. Passing the pumping station I saw it was in operation.

One of these days I'll have a wide enough lens with me to get the 'perfect' angle. As it was I got as close as I have managed yet. Take a step back and the bridge rail gets in the way and the risk is run of being knocked down by a passing vehicle! Come summer and the leaves on the trees make it impossible to see the pumping station and the sluice from this viewpoint so it has to be shot at this time of year.

Rather more effective was the shot I took looking straight down from the bridge showing the pumped water racing past the almost still water in the ditch, separated by the pilings placed to prevent erosion. All photos tagged with 'drainage' to maybe make up a collection at some point. 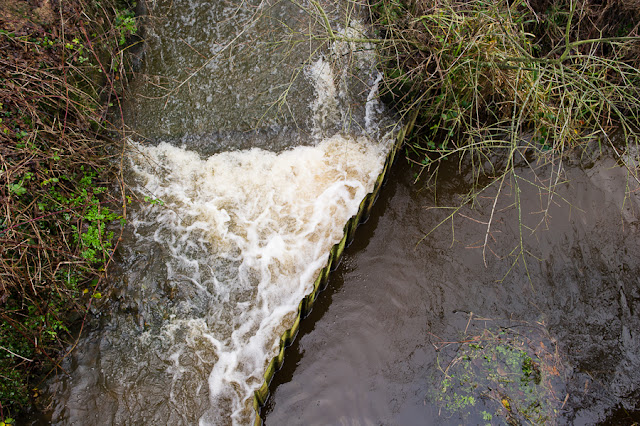 Stuck for ideas I headed back to the beach, to the other end of the sea wall this time. I resisted the temptation to walk out on the shore to watch a motorbike and an off-roader being dragged out of a mud bank  by a tractor a short distance from the pier. Instead I photographed the concrete steps in the sea wall and sundry flotsam thrown up the beach by the gales the other week. I missed a couple of horses being ridden out from the car park when I arrived, and when I returned they'd been loaded in the horse box. Just my luck. There weren't many people around anywhere. The cold wind was no doubt keeping sensible folk indoors.

One or two hardy dog walkers were about. It's quite easy to take candid shots of dog walkers as they assume it's the dog you are interested in photographing. In reality it's the relationship between the animals and the  people I find interesting. Particularly when the dogs are on leads and there's an actual as well as a visual tension created.

Why I always spot interesting subjects as I walk towards the sun is a constant frustration for me. This pair looked promising from a distance as the dog was running along the top of the wall when I first saw them. I managed to get the camera set up in advance and fired off what I thought was going to be a burst of frames - but turned out to be the one. I'd not set everything up, obviously. It made no odds as I got my timing spot on with the woman's feet pretty nearly perfectly placed to suggest speed. What I can't decide is whether the crop works better than the full frame. It changes the dynamics of the picture, for sure. It seems more active. 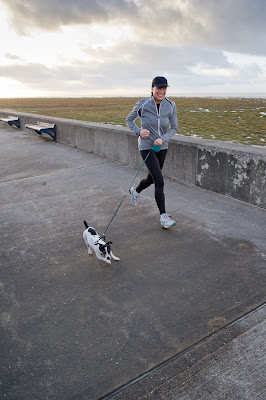 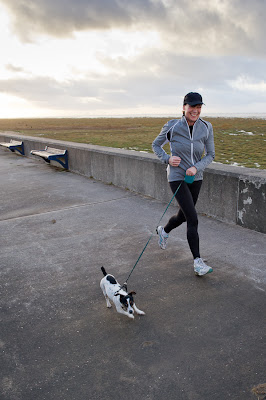 Funnily enough I didn't like either option so much in black and white. Which is odd, because that's how I often seem to end up treating pictures of people with dogs. Maybe that's because there is little colour in this one, it being mostly shades of grey.