Getting my eye in, and messing up

Strange how using one focal length gets you seeing with the same viewpoint. The other day I took a zoom out for a wander with nothing much in mind and found many shots were made with it around the 50-60mm mark. Unfortunately I've been getting my timing wrong this week. Not just being in the right place at the wrong time, which is normal for me, but timing shots badly.

It's not often I get to the shrimp track when there are shrimpers around. One day this week I did. With the tide still well out I got plenty of warning that the tractor was coming is and got myself in a position where I thought I might make a reasonable picture. I got the framing pretty much how I wanted it with some churned up muddy sand bottom left and the patch of the tractor predictable on the right. As it passed through the deeper patch of water I knew there'd be some spray to suggest movement. Even the seagull took off when I wanted it too. 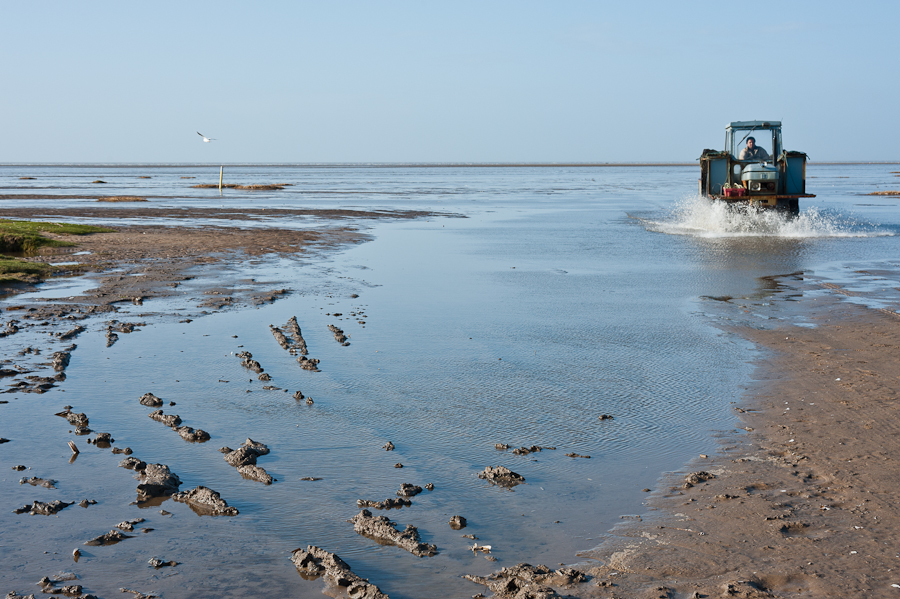 This was okay, but like a dolt I'd set focus on the foreground when making pictures with the tractor a distant speck and forgot to shift it to the tractor when it got closer making it a bit soft. I'd also neglected to shift out of single shot mode so I couldn't rattle off a number of shots in quick succession. The next frame I managed was the one below. 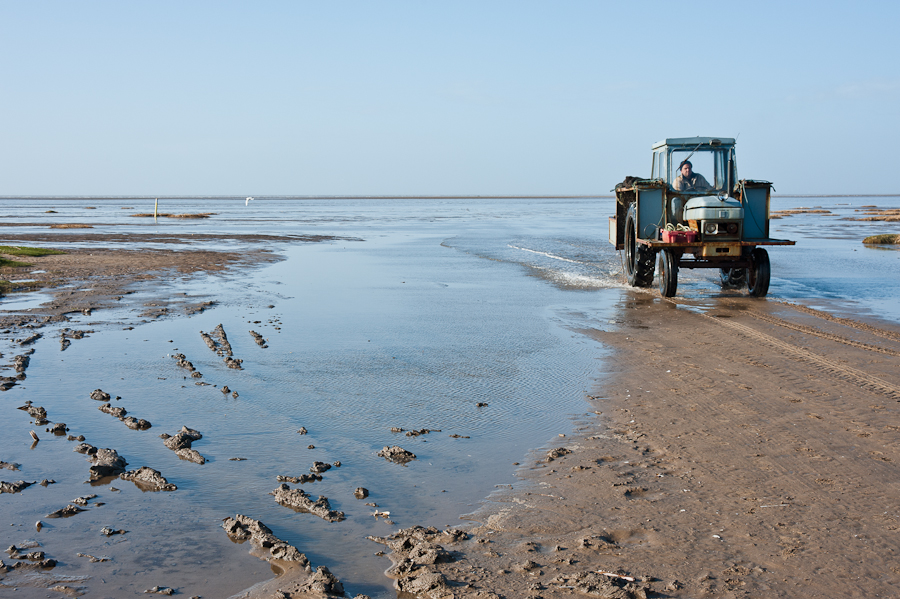 The tractor is large and better positioned, more side on, but there is less impression of motion - and the seagull is now below and just touching the horizon. Bah! I made an abstract of tyre tracks to cheer myself up. I even got them reasonably sharp. 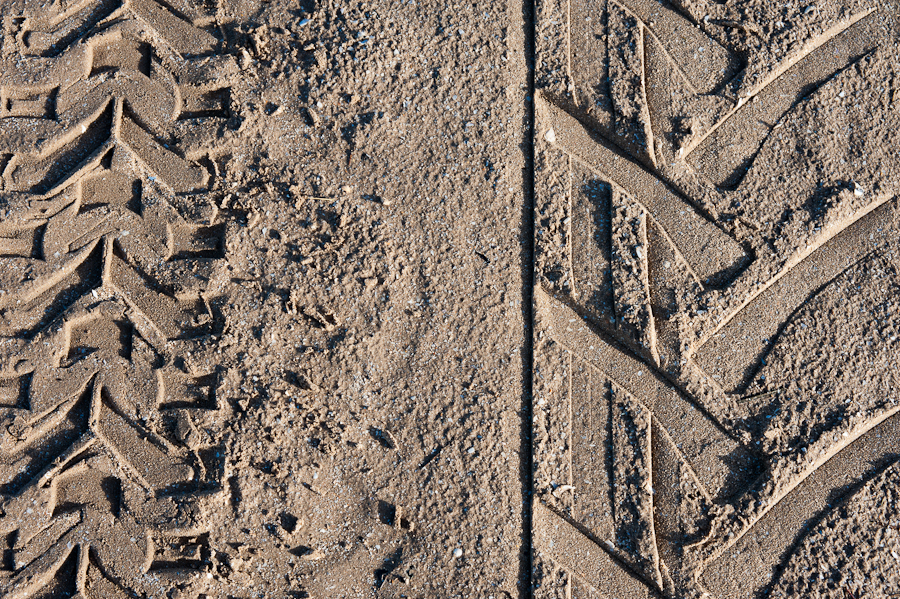 Today I set out with a purpose in mind. To try to make some photographs about how nature reserves don't actually put people in touch with nature but distance them from it. A big idea to put into pictures. One that I realise I've been working towards for some time, and which needs more than a couple of hours to get to grips with. Anyway, I took two bodies one with the 50mm and one with the 28mm. These two lenses seem to cover the way I see things, and being fixed focal lengths they make me think more about framing as I've mentioned many times before. I also stuck the telephoto zoom in the bag in case I headed for the seaside later.

Needless to say I got sidetracked as I wandered around the outside of the reserve. The ditches and drain got me thinking about the drainage project. The frame below manages to combine a drain and an irrigation pipe, bringing the to themes of the project together. I could have made a better effort of the framing, although I did make a better fist of a picture in portrait orientation, but without the drain in the shot. 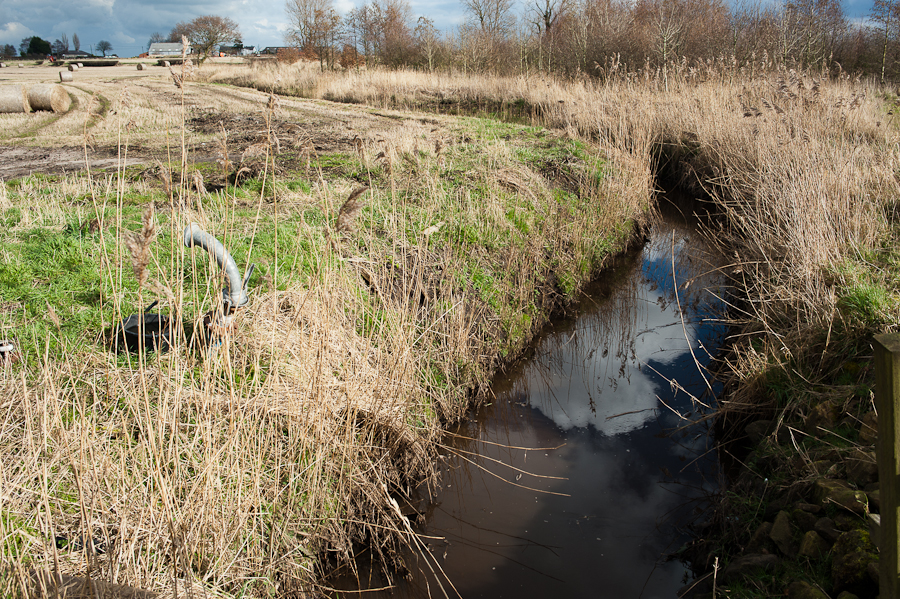 I've photographed this gate and sign a few times before. This is the first time I've made a picture of it though. Good photographs can work because of the compositional structure or because of their content and/or concept. Better photographs blend the two. I think this photograph manages to work as a composition and as an idea. 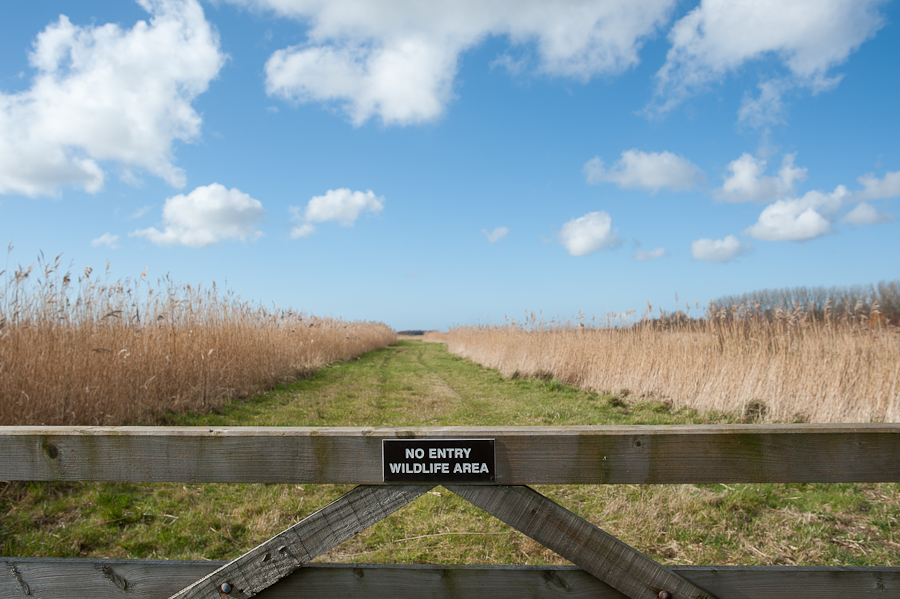 When someone shows what they think is a good picture the failed attempts are, as here, usually kept hidden. I think that's why Henri Cartier-Bresson said that contact sheets should never be shown. By only showing the best shots the mystique of the photographer as a magician able to pluck perfect photographs from the world around them at the click of a shutter is maintained. Show the contact sheets and that myth dissolves. Just take a look at H C-B's contact sheets... But the failures are like a painters sketches. Important to the process, and revealing to the outside observer.

I am tickled by the irony that wildlife frequently chooses to ignore nature reserves. Even preferring to feed across the road from them like the geese in the picture below. At a larger size the geese in the field are much more visible. If the name of the reserve had been visible on the sign that would have made the picture really work. 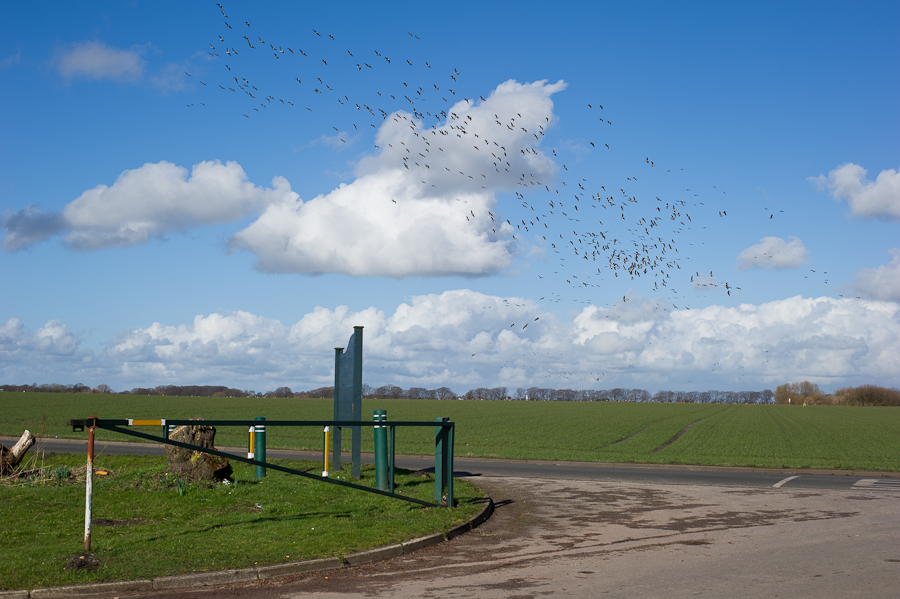 This problem of scale of display is increasingly problematic for photography, I think. As screens get smaller and become the default way for people to view photographs the benefits of cameras which can resolve a lot of detail become redundant. This may well influence the way people make photographs. I guess that for the majority of people who take photographs these days, with compact and phone cameras, this is probably already the case. Or maybe people will expect to be able to click on a photograph and see it at 100%. This option is frowned upon by photographers wanting to keep their files to themselves so they can sell prints, but who still want to display their work on the web. Quite where photographic display will go in the future is hard to say. There may be a split between photography for the web and gallery display. Massive prints are becoming the norm in the gallery and art world. It's a bit elitist to my way of thinking for the most democratic image making medium.

When I, inevitably, got to the beach it was closed to cars. Like everyone else I had to find somewhere to park and then walk. By now I had the zoom on one camera, and being idle it stayed on. My bad timing struck again and a couple of horses were being readied for going back in their trailer. I almost made a decent picture. I keep on trying to make pictures which bring more than one subject into the frame. This one drew together horse riding and dog walking. Alas the timing was off. So it's just a snap and not a picture. Timing shots is a learned skill. The more you try the better you get. The difficulty is finding the time to try as often as is required. I'll have to keep on making the failures. 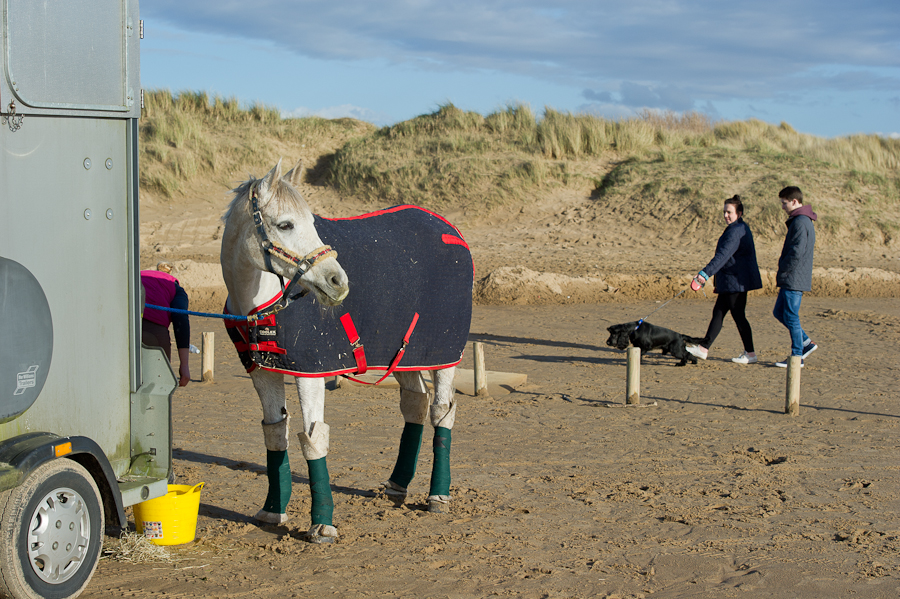 One picture that didn't fail quite so badly was this contre-jour shot. Maybe I should have got a bit lower, but my knees aren't keen on that option! Yet again it reads more clearly larger. The tyre tracks lead the eye up and left from bottom right where they meet the matchstick figure walking to the right, taking the eye to the right along the dark band until it meets the pole and bounces back. While the light and texture work to create an atmosphere the figures could be more interesting. That's he benefit Lowry had over a photographer - he could put his matchstick men anywhere in the frame. 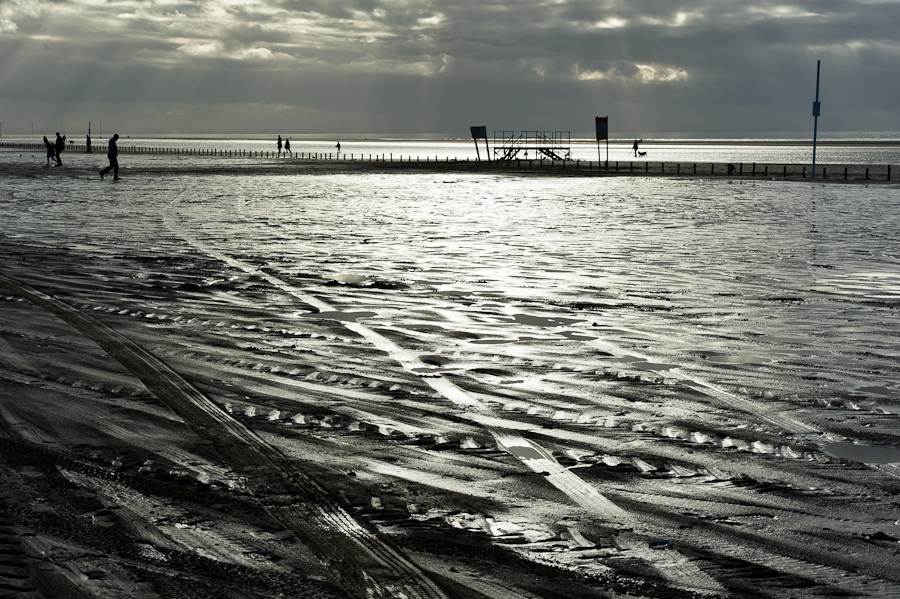 It's funny how, no matter how many projects and ideas I keep coming up with, I always seem to end up back at the beach. Perhaps I ought to face up to it and stick to making beach pictures and give up my pretensions of making pictures with messages? Of course, all photographs have an agenda of some sort  (are 'propaganda', as Martin Parr put it) even my beach pictures are loaded; why else would they often involve large areas of negative space and small, distant figures? 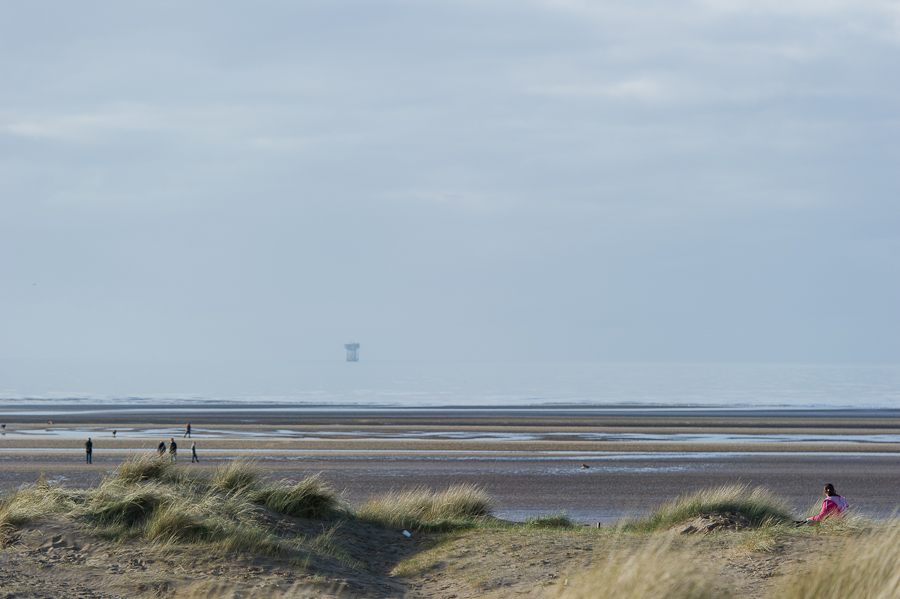