My current preoccupation with the marsh saw me heading back towards it on Sunday. That was until I hit the tailback from the temporary traffic lights on the bridge that had been damaged (for the umpteenth time) on Friday. A hasty change of direction and plan was made. I thought I'd go and take some photographs of the fence surrounding one of the local nature reserves as part of my ongoing critique of the conservation business. The fence serves to keep out both non-paying guests and yer actual wild wildlife. They don't want pesky foxes getting in!

When I parked up by the side of the road my eye was, as it so often is, drawn to a partially harvested potato field. If find it much easier to make landscape pictures of the farmed land with the lines and patterns planted crops provide. The morning's rain pooled on the soil and the clearing sky helped add to the feel of the pictures. Back home on the computer I tried a few different aspect ratios (including square) but  the 3:2 ratio below was the most successful - after a slight crop from the left. 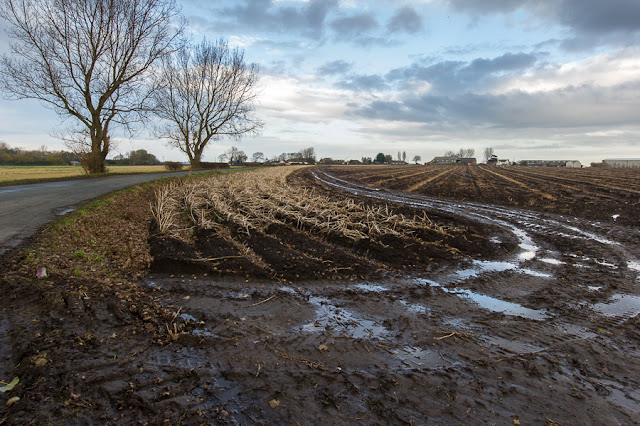 The fence proved to be uninspiring. earlier in the autumn it had been festooned with dying climbing plants and fallen leaves which I had intended to photograph sooner. Now they were gone. The signs warning of the electrification make for too obvious a comment. I shot a couple anyway. If this ever becomes a project they might make fillers. One landscape, one portrait, just in case in the way you might shoot for a magazine article to give the layout artist choices.

Leaving the fence I wandered off down a footpath that runs alongside the reedbeds. Had the light been more favourable I would have tried some shots of the reeds. I often try to make pictures of reeds for the sake of making pictures of reeds. They rarely work out the way I want them to, although some have come close. In this location I want to try to picture them so it shows how they hide nature from the people who are trying to look at it.

You can often hear birds in the reedbeds or the watery channels through them without ever catching a glimpse of them. get up on one of the viewing platforms and you fare no better because the birds tend to avoid those areas. Hardly surprising as the platforms do little to obscure anyone on them. 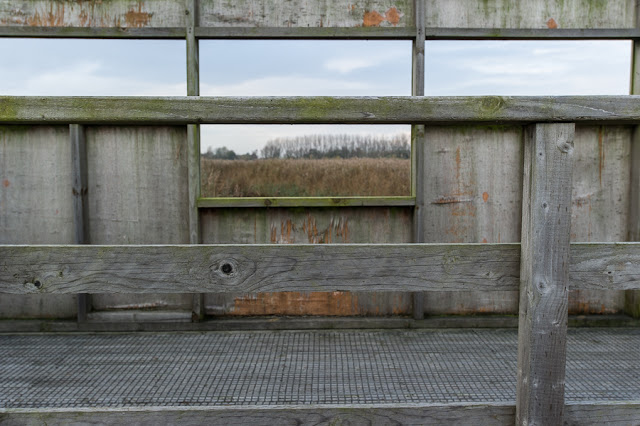 At the side of this platform was a pile of recently cut willow.being nosey by nature I had a look at it thinking it had been cut from a wind-blown bush to tidy it up. The gap in the reeds suggested otherwise and further inspection showed that three willow bushes had been felled. No doubt to prevent the process of natural succession that reedbeds follow to carr and then woodland. I made two pictures of the scene to illustrate, perhaps not obviously, the managed nature of this unnatural reedbed. Not too many years ago it was farmland like the potato field on the other side of the road. 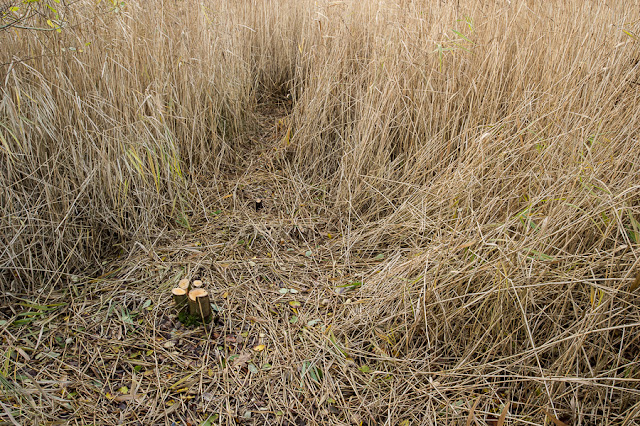 In a way I suppose this is a sort of subjective or political photography. It's about the artificiality of organised nature conservation - and also about the contradiction of conservatiopn bodies claiming to get people closer to nature while all the time creating barriers and restrictions which prevent that happening in reality. I still try to make photographs that have a formal visual structure though. They have to work for me as pictures and not just as documents.