One of the golden rules of photography I am always trying to break is the rule of simplification. Like every 'rule' it has its time and place. And like every rule the complete opposite can work too. It's just that in this case making complicated pictures is a lot more difficult than making simplistic one.

When it comes to making complex people pictures the big problem is timing. either you miss a moment, or moments fail to coincide. At the poultry auction the other week I thought there might be a picture to be made/found focusing on the two men in flat caps leaning on a livestock pen. What I needed was for thier expressions or gestures to coincide with something going on n the background. One good reason for eschewing the fad for super-shallow depth of field.

In the first frame there's not much going on at all. The young lad talking to the guy in the cammo cap is okayish, but there's not really much to it. I'm sure that if I posted this frame for crit on a well known forum I'd be advised to crop it down to the two men in the flat caps. But that would just be another random shot of two old blokes. 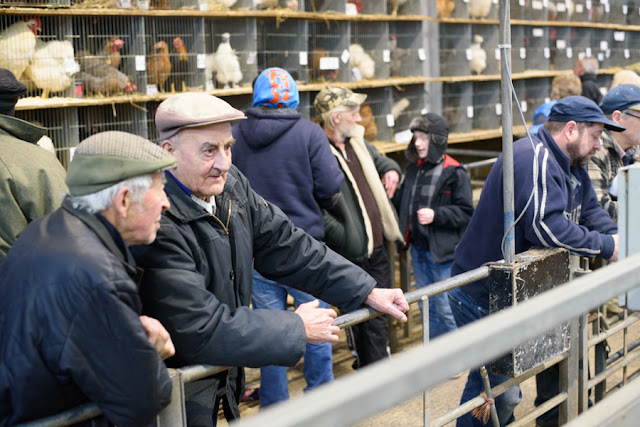 I kept the camera framed and waited. The chap facing the camera spread his hands and one behind him pointed at something. It could have been good, if I hadn't timed it badly, or maybe things didn't time themselves - it's hard to know in a split second. The downward gaze is what stops the picture working as it might have done. I'm not saying it would have been great, but it would have been a lot better. 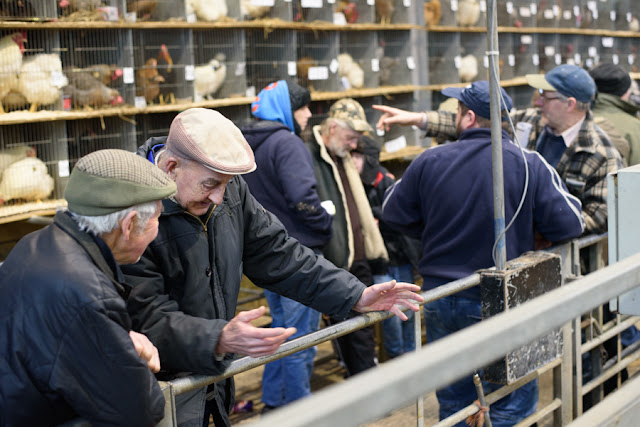 Making simple pictures is a lot simpler. But not so much of a challenge and they are often not as interesting. But it's pictures with impact that most people seem to want to make. Ones that hit you straight between the eyes. All too often they are superficial though. Sure you notice them, but, like a one line joke, you are soon looking for another. Make pictures that have more going on in them and they can hold the attention longer.

But busy pictures are very often frowned on. Strange when you look at the pantheon of history paintings. They contain many figures in many poses and are held up as masterpieces. Try something similar in a photograph and you get told to simplify. Makes no sense to me. I think the reason is that amateur photographers are largely driven by the desire to make pictures in the commercial mode. Editorial and advertising images have to arrest the eye. Their job is to make you look and either want to buy something or read an article. Even landscape photography is prone to falling into the decorative chocolate box or calendar style. None if it is about trying to make you think too hard.

I know that the DigitalRev YouTube videos can be a bit silly, but the latest in the series of cheap camera challenges is a really good lesson in how to interact with people. Okay, so the guy is a fashion photographer and it's London fashion week and the people are fashionistas who crave attention, but as ever it's interesting, and educational, to watch a photographer at work even when the camera is really cheap and nasty. As the hakneyed phrase says - it's not the camera that makes the pictures....