Quite how I stumbled across this video on Youtube I can't remember but it enjoyably whiled away some time over the boring weekend. I often find that when I listen to how other people make photographs that I do simialr things or have similar concerns. Sometimes they give what they do catchy names as if they are something special, or they alone have discovered. The compose and wait technique that Sam Abell talks about is one that is well known and often used by street photographers. It's something that is always worth doing when photographing people who are doing stuff. It's what I mentioned but didn't name in an earlier post. It's a technique that relies on the chance that something will happen, that you are able to freeze, that makes a picture. That's not the same as a lucky shot because it involves an element of forward thinking.

The other technique that gets frequent mentions in the talk is 'micro composition'. This is something I can't say I'd ever heard of. To me it's just a part of composition. Breaking down composition into discreet elements runs the risk of fracturing it so you concentrate on those elements at the expense of the whole. Framing a shot is all about looking at the bigger picture while taking care over the details. That's why it's hard to do well. All too often I overlook the details. There is one exception. 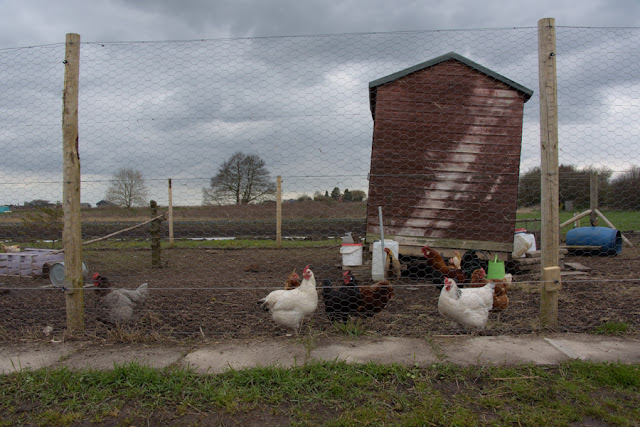 I'm obsessed with intersections. In the above picture I took great care to ensure the right hand foreground post lay between the shed and the blue barrel without touching either, or the white containers. Although I'm not a natural obsessive this is one thing about framing photographs that does niggle me like mad when I miss something that interacts. It's one way of differentiating a snap from a considered picture.

With the framing sorted out I then waited for the chickens to make themselves reasonably arranged. Which also meant no intersection or hidden heads. or at least as few as you can expect from a load of chickens!

It was only when I looked at the picture on the computer that I realised other of Sam Abell's compositional techniques was in use. There are horizon lines - the path, the top of the fence, the actual horizon. There are also layering clues that imply depth - the foreground and background fence posts. Note here a minor intersection niggle - the central back fence post is touching the branches of the distant tree - which was probably unavoidable in order to maintain the primary consideration of the foreground post.

It's all well and good analysing a picture like this in retrospect. It's even quite simple to think about these things and apply them when taking the photograph. The really hard part is being able to see the potential for a picture in the first place. What I saw was a load of fenced in chickens and a shed. That was the subject. So I took one shot from a standing position using the two foreground posts as a partial frame, checked the camera's screen and immediately realised I needed to get down to chicken level. Then I thought about the finer details a bit. Adjusted my position and snapped off a few frames in the hope the poultry would oblige.

Not doubt there are some who would say the light isn't 'good enough', but to my mind the flat light and grey clouds work just fine. It's how it was, not how I might like it to be. Although overcast is pretty much how I like it!

What a lot of drivel about taking a snap, eh? But then they do say a picture is worth a thousand words. To end, a picture of some words. 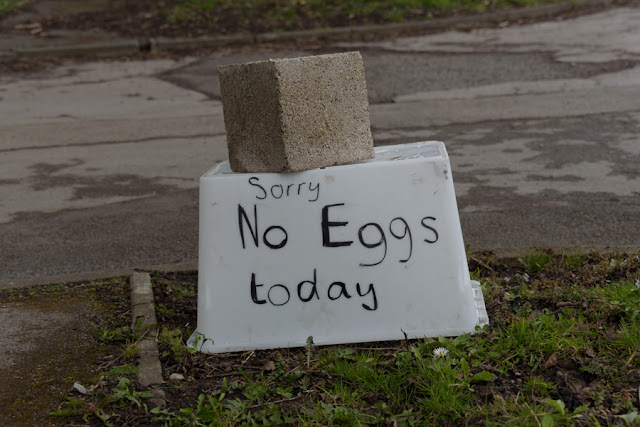