Once more the lure of poultry proved impossible to resist. Today's show was primarily an egg show, with a junior poultry section, which didn't fill me with confidence of getting anything new. But you have to be in it to won it as the cliché goes. Besides, the sausage and bacon barms are good, as is the tea. With there only being a few birds entered the show room was pretty much as it is when not in use. That allowed a couple of sort of behind the scenes shots of stuff in storage and some cleaning equipment. 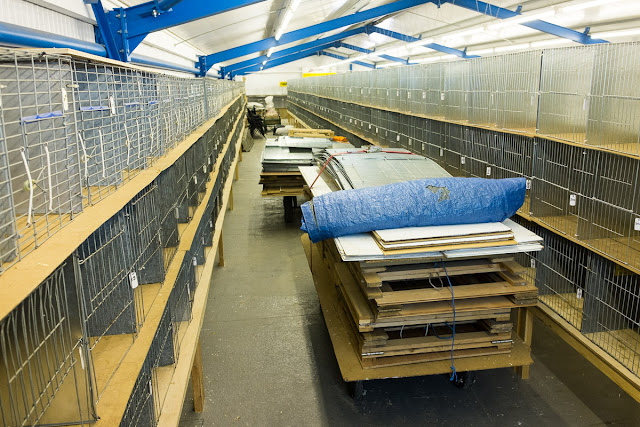 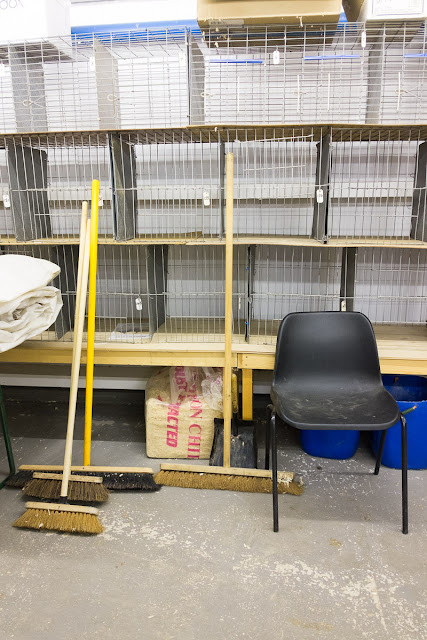 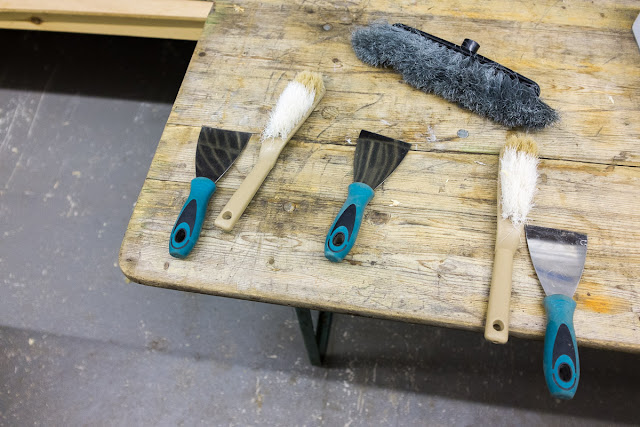 Not expecting to have much new to photograph I was in trial mode. The intention was to use the Fujis to see how they coped. Or maybe to see how I coped with them. I had a real camera as back up, along with the dreaded 85mm lens. Not trusting that lens I had my faithful 100mm macro with me too.It proved to be a swings and roundabouts affair. Making a selection of 21 frames from the day 13 of them were shot on the small cameras. That's not really to say that they were the best tool for the job, or that I preferred using them. It was simply that all but one of those 13 frames was made using the 28mm equivalent lens. No surprise there!

As far as the big camera went the 85mm failed miserably. It simply won't focus close enough for my liking. Time to get rid. All bar one selected frame shot with the DSLR was at 100mm. The odd one out being taken with the 20mm lens I'd taken along for the ride. 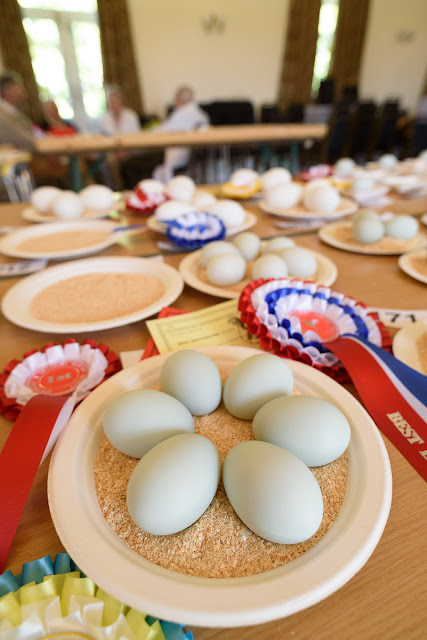 With it being an egg show there was the usual contents judging, providing an opportunity for some 'cracking' shots. Why I insist on trying to time my action shots rather than setting the camera to burst mode, I don't know. It's nothing to do with believing that timing things to one frame is a more worthy approach, relying on skill. It's more like forgetfulness that there is the option for shooting a burst. I started out doing it the old school way and got lucky. I'd never seen a wooden egg cracking device before. How to show what it's for? I think having the egg a milimitre away from the pointy bit might do it. Pure luck that I managed the picture below. 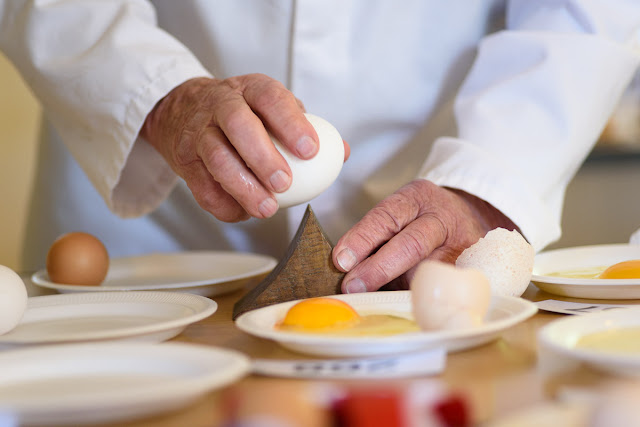 After a couple of attempts at nailing an egg cracking picture I turned the dial to high speed. After one out of focus burst I tried again. Ten frames later I had a sequence which was in focus, and one picture that worked on its own. I even got the egg cracker in the shot. 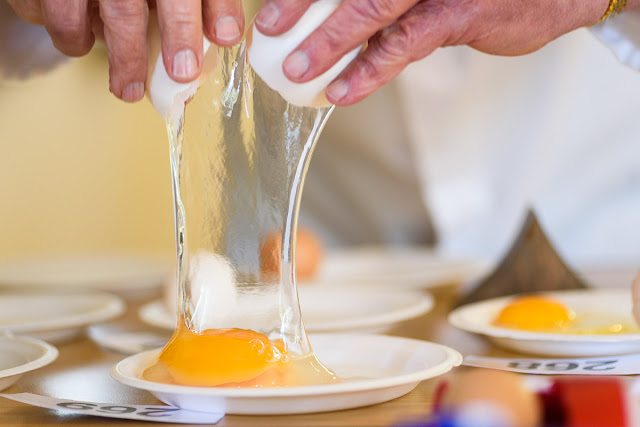 I still don't find the X100T as fluid to use as a DSLR. This may be because of a familiarity difference. Probably the most annoying feature is how tired it gets. That's the inherent problem with cameras that use an electronic display. They have to go to sleep to save battery power. The drawback is that they don't like waking up. A DSLR, on the other hand, can be left switched on all day without much drain on the power source. I've missed a few shots now because of this.

On the plus side these new-fangled cameras are discreet. They can be operated completely silently, which means that up close with a wide-ish angle lens you can photograph very unobtrusively. 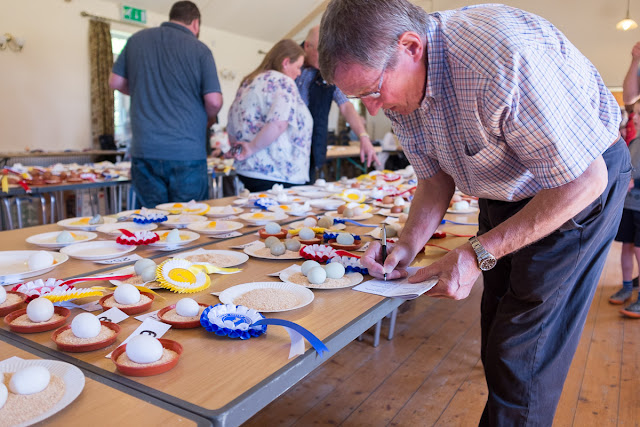 The files seem to lack something in the colour department to me, and I was finding exposure to be less sure than the DSLR. For stationary subjects this in't a big deal, it's easy to chimp and correct. But when timing is important it can be a let down. 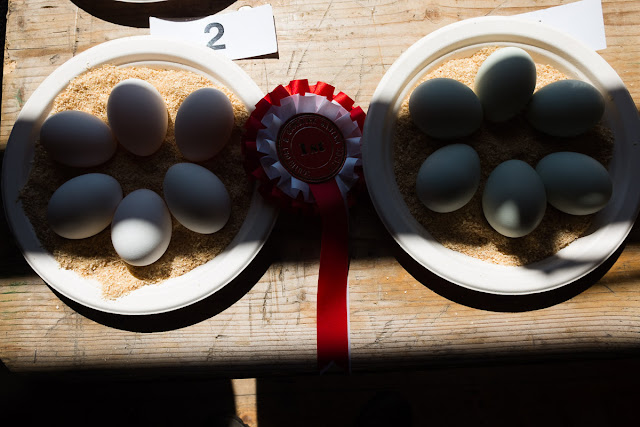 Once again I paid for my cups of tea by photographing the prize winning birds. Well, three of them. The 'studio' had been enlarged and was much better. The lighting still isn't ideal, but it's improved. I also got spotted by the organiser of the poultry show at a local-ish agricultural show. Soft lad has agreed to go and take some photos for them... I would most likely have been going anyway. So no great hardship.