Another baking hot Saturday traipsing round a show field. One lesson I've learned (belatedly) is to arrive early so as to avoid the parking queues. It also means there are a few photo opportunities as people get livestock penned. I was still a bit late for the sheep arriving, and the poultry tent provided only more on the same old themes.


The only really different pictures were of people holding four day old chicks. Ever so cute. The chicks that is. The feathery ones...


I chose to miss out on the poultry judging and concentrate round the sheep pens today in an effort to make some actual pictures. The bright sun really does make it a struggle with harsh shadows. On the plus side it means ISO values and shutter speeds remain high. Not that those things bother me much.

Things started out pretty much as I left them. Looking for the unusual positions people get in when handling sheep, and trying for a tooth examination picture.

After shooting a load of 'same old' frames I decided to suffer the pain of kneeling down to get a lower viewpoint. If the sun hadn't been so bright I could have used my flip-down screen to save the worn out joints. Excusing the unintentional pun, but things started looking up when I got down low. Not only does it make the world look different, it also gets rid of a lot of the background clutter. Particularly when there is a solid blue sky. On a more normal grey sky day this wouldn't work so well owing to exposure differences. But today it was fine. Even if it did show up the muck on my camera's sensor. I started out pretty straight on, then got more experimental.

Capturing the humour of little moments isn't my strong point. I still try. At one stage the judge was discussing the finer points of a Blue Faced Leicester's ears with the sheep's owner. 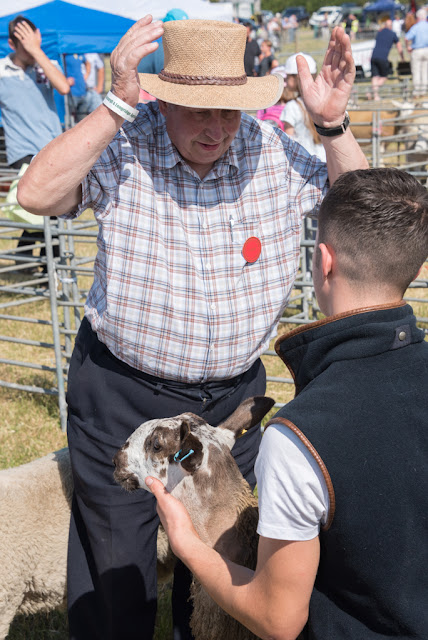 I have no explanation for a cow wearing a hat... 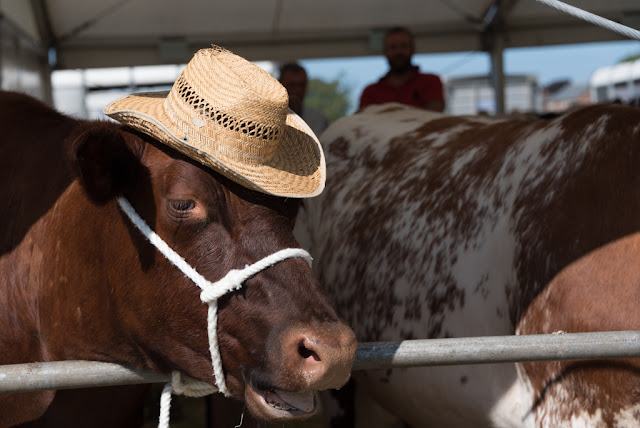 An unexpected bonus, which either wasn't on the show's schedule or if it was I had missed it, was a demonstration of sheep shearing. Which got under way after a false start when the generator packed up. Again I put my knees through it and the pictures, which not great, did benefit from the change of viewpoint. It also allowed people standing behind me to get a better view. I don't want to be one of the inconsiderate photographers who 'have to be' at the front all the time.


Close ups and other 'vignettes' of these events are something I'm always on the look out as they help build the picture. Trying to get a frame which shows how the clippers peel the fleece away is tricky when you are part of an audience.


I should have waited until all the sheep had been shorn after the second demonstration, but by half past twelve I was roasted and ready for home. It felt like I'd been on my feet all day and I was metaphorically on my knees! So a half-clipped flock had to suffice.


Street photographers like to play around with pictures of pictures and real things or people. In that vein I was quite pleased with, once more on my knees, this picture of Kerry Hill sheep.


Lessons learned, or rather re-learned: get low, get close, but don't ignore the wider view.