The best laid plans and all that

With Christmas over and done with I went in to town to get some stationary, and also to visit an exhibition at the art gallery. The shopping went well, the exhibition viewing less well. The  gallery had shut down before Christmas and doesn't open again until after New Year is done with. Bloody austerity. Or bone idle council staff more like. As I'd paid for two hours parking to give me time to look at the exhibition I went for a wander.

Out of character I'd stuck my 50mm lens on a DSLR body rather than take my Fuji with it's wider alternative. The town was pretty quiet and I was a bit pissed off. I did find the reflections of 'that bridge' worthy of some attention. I got one shot that is OK, but I should maybe have persevered. 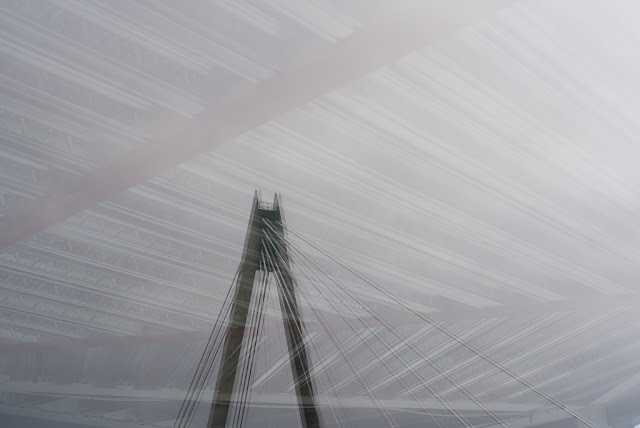 There weren't even many dogs being walked, and I am trying to stick to one angle of view for that project, but once I'd got used to the change in viewing angle of the longer than usual lens I got a couple of shots. I still prefer using the wider lens, not only does it put more background into the frame it's surprising how people don't realise you are photographing them when you are up close. 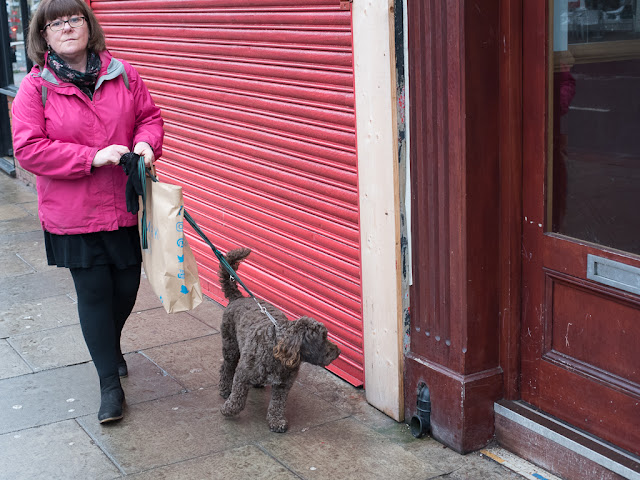 Saturday was scheduled to be the brightest day for a while so I made plans to get out and about. While it was sunny at times it was also cold from a strong wind. As a result I spent more time driving than photographing. It was that wild even the Swaledale sheep, a hardy breed, were taking shelter. As another daft experiment I had taken my telephoto zoom and my neglected wide zoom. The wide zoom proved once more why it's neglected. 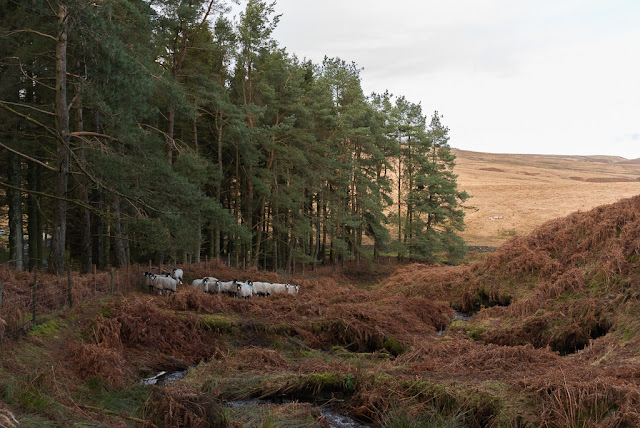 Closer to home, with the afternoon light lasting longer, I've managed to wander round the wood a couple of times. The first visit was not going well until I took a low viewpoint shot of the base of a tree. I'm not sure what struck my about this but something resonated. Continuing my wander I got teh idea of taking some low down pictures of the tree stumps in the wood. There seemed to be loads of them. But I wanted to do them 'properly' using the lowest ISO - which would mean a tripod!! 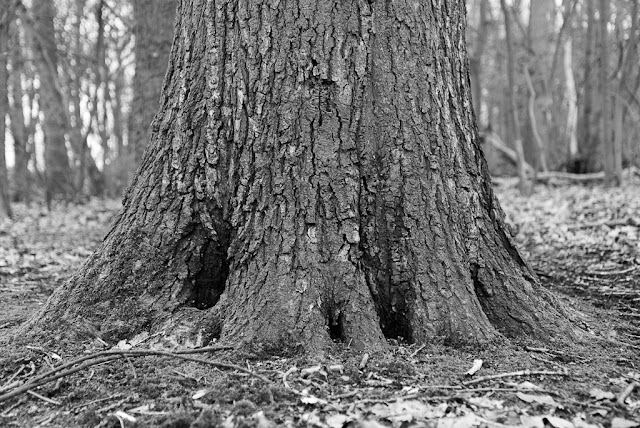 Rather than hump my big tripod and faff about setting it low I dug out my Gorillapod and remote release. 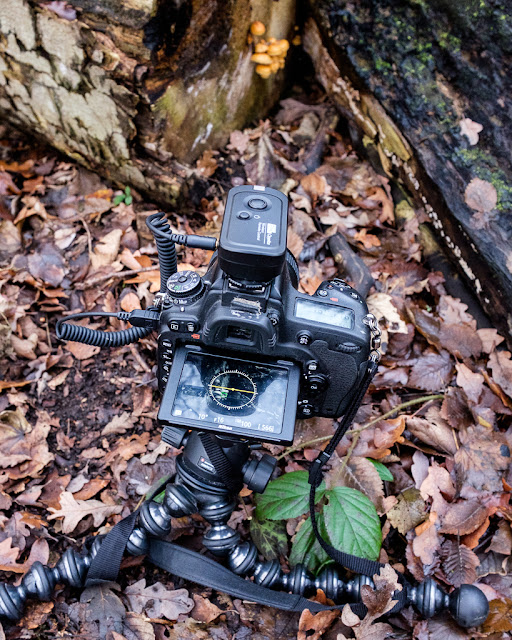 There were a few fungi about which I had a go at photographing. The results were as rubbish as ever when I photograph fungi. I have no idea why. Possibly a lack of a macro lens, or more probably a lack of genuine interest... 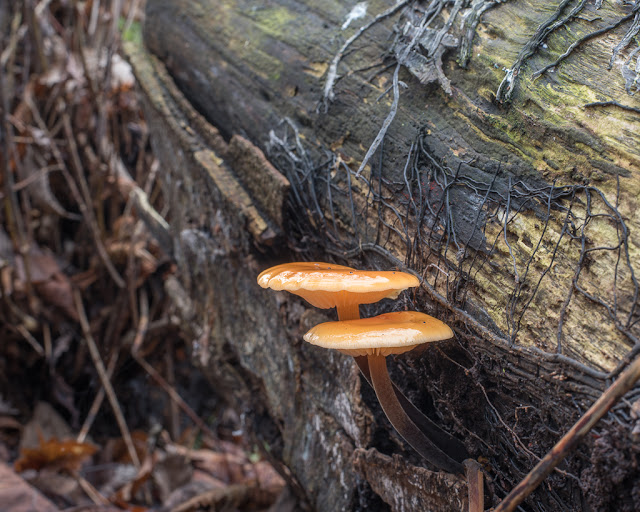 I didn't fare much better with the stumps. Firstly there weren't as many as I'd imagined there to be. Secondly the ones there were tended not to be easily separated from the background, had saplings sprouting next to them, or were obscured by undergrowth when viewed from the best position. My vision of a set of well isolated stumps made into a three by three grid of nine was thwarted. I should have known better than to pre-plan something. 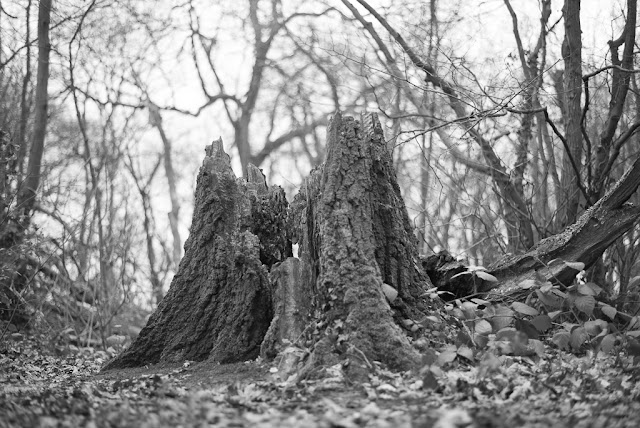 In the end I settled for six far from ideal stumps. Ho hum. 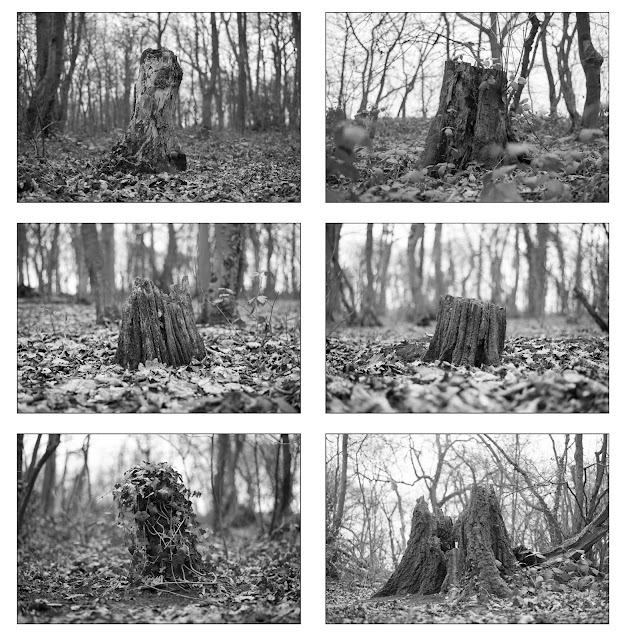