Should have stayed home

The strange heatwave last month was long forgotten as I foolishly went east for the last nursery trial of the season. The forecast had been for showers and I was tempted to give it a miss, but just as decision time arrived so wid the sunshine. It looked bright where the weather was coming from so I'd be driving in to improving conditions. Wrong again.

If the wind had been from a different direction the driving rain wouldn't have been as much of a problem, but it was in my face and the camera's lens. Taking shelter in the livestock trailer didn't make much difference as the wind was so strong the rain, and hail, was almost horizontal! 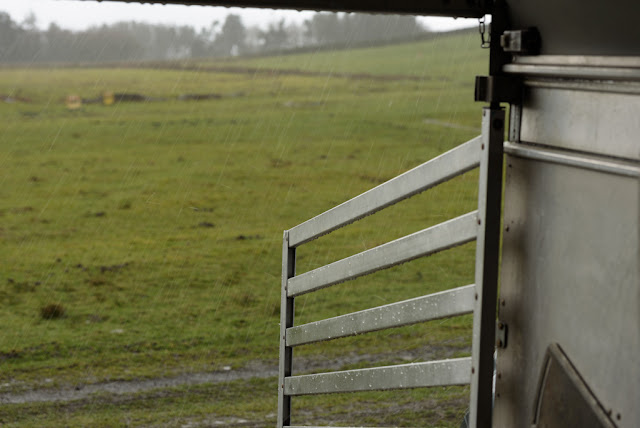 I tried to be creative from within the trailer, but it didn't work too well. 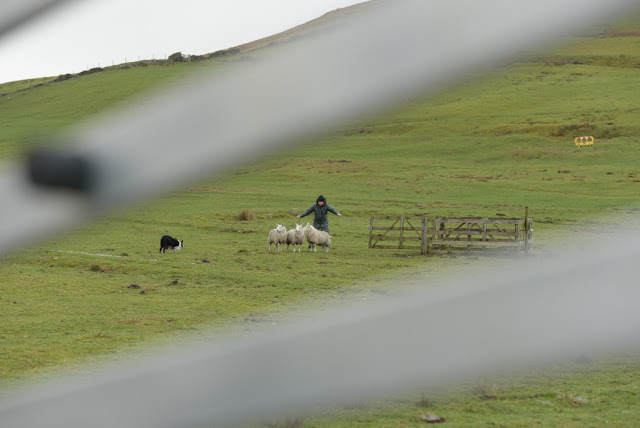 Thinking I might get a different perspective, and the wind off my back I set off to climb the hill and look back and down on the field. No sooner had I reached the track part way up the slope than a heavy squall came in. I took shelter behind the pine plantation by the quarry. Stopping ever so briefly to take a couple of shots. One of which I quite like. Not because it's a stunning landscape picture, but because it shows the horrible weather and the impact of industry in what were wild places. My kind of landscape picture. 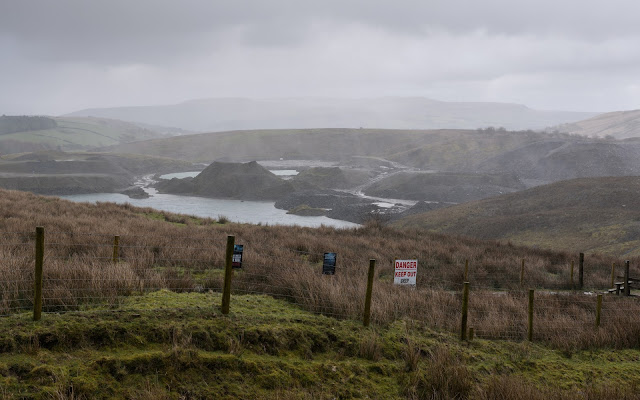 The morning continued to be showery. The sheep were being uncooperative. I find the best opportunities for action and interaction pictures come as the sheep are to be penned. yesterday few got that far and some which did walked straight in to the pen without the dog doing anything.

With the weather so vile everyone was either hiding behind or sat in their vehicles leaving me with little else to photograph in the spells between the action near enough to focus a lens on. I tried to take some photographs which might sum up the weather and conditions. 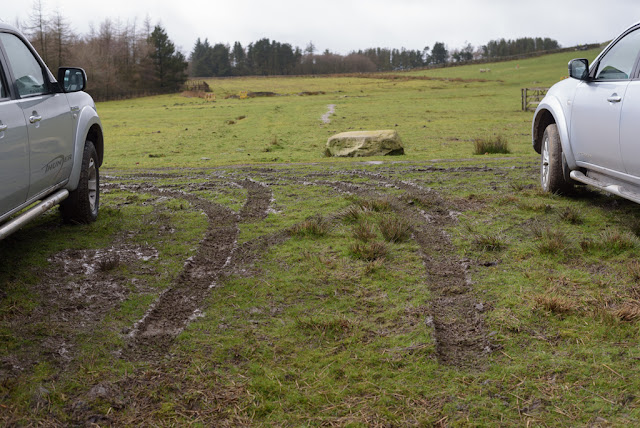 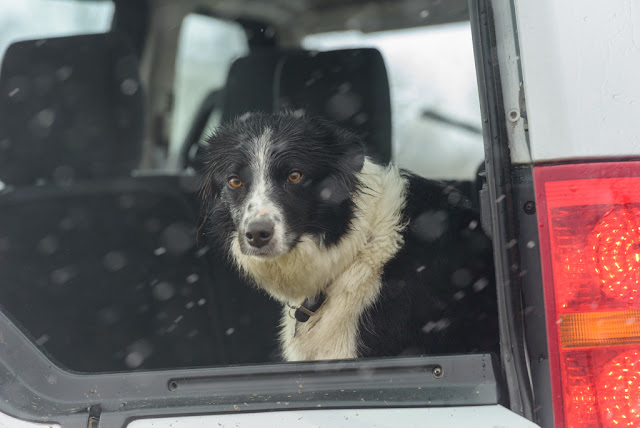 I tried taking a walk up to the release pen where I could have got my back to the wind. I hadn't even got to the kissing gate before yet more hail blasted me! I gave that up a a bad job. 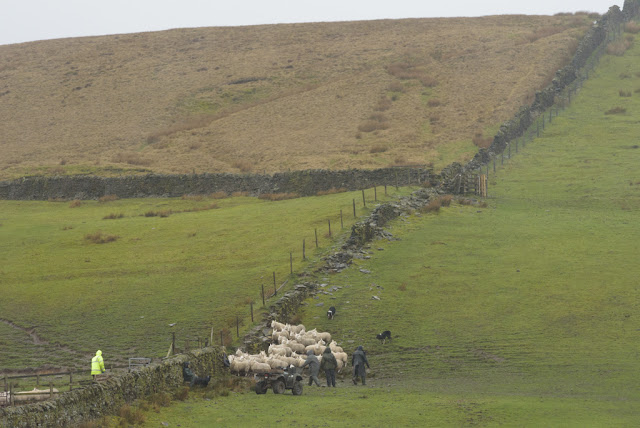 Eventually the sun came out for good, but only when it had moved round to a less than helpful angle. 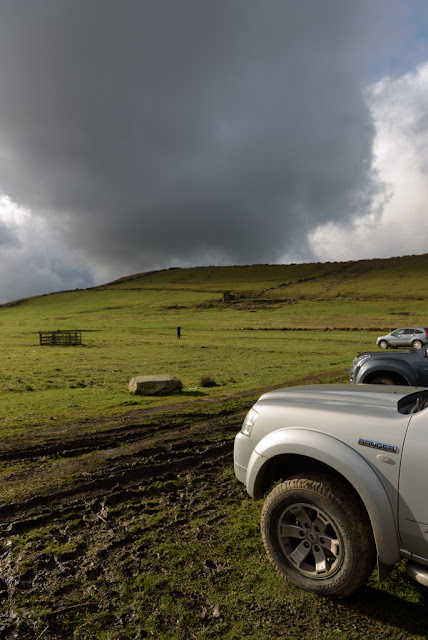 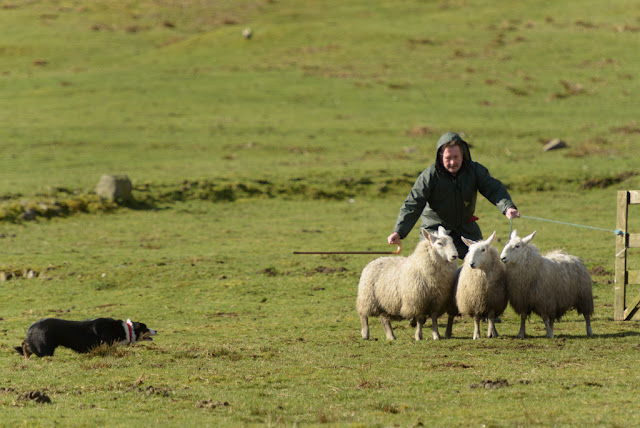 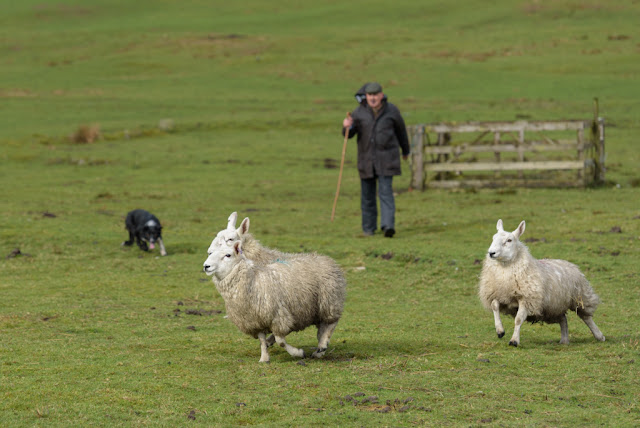 At the presentation I got asked to photograph the winner of the championship trophy - with his dog, Fred. I thought dogs would be more cooperative than chickens. Not so. While his owner was stood up Fred was quite well behaved, when asked to kneel for someone else taking phots Fred thought it was playtime and rolled on his back for a tummy tickle.
Jane Bown used to claim only to take two shots when sent out to get a portrait for the Guardian. I got my shot with the second frame.Maybe she was on to something? 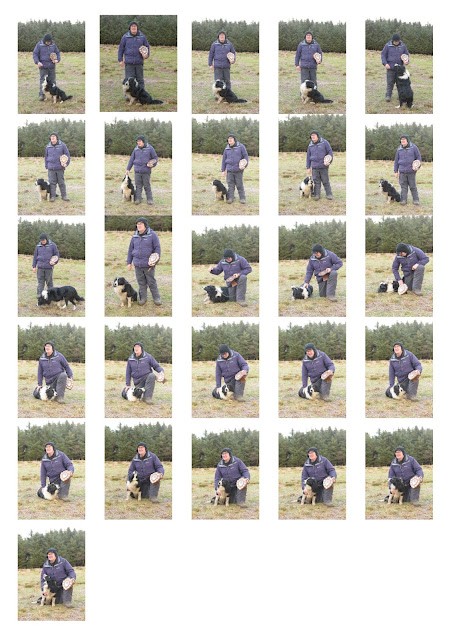 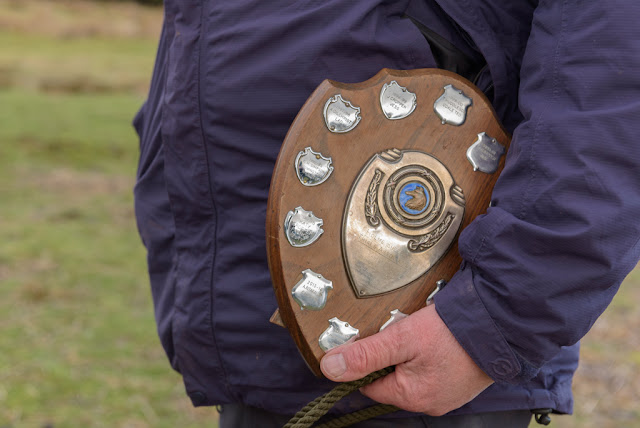 One of my daft ideas had been to do more portraity type pictures. Handlers walking off with their dogs for one. That didn't work as I couldn't face moving my position in the rain. The wind didn't help either as there were gusts which almost took me off my feet.

I was using my fast but heavy zooms today as I know from experience they are better at coping with rain. I find them a bit limiting though. The longer zoom doesn't go long enough or focus close enough. The 'standard' zoom shouldn't be restrictive but somehow it stops me seeing pictures while single focal lengths helps me. It's weird because the theory says that one lens covering my most used focal lengths should be ideal. Yet I'd rather use two lenses on two bodies, or one lens which covers the complete range of the two zooms and more. Guess I'm just plain odd.

Another frustrating and unproductive day. At least it didn't snow. If it had done I might not have got home.