Who could imagine that there would be a National Sheep Association and that it would hold a biannual show in the north of England? There is, and it does! This time round it was to be held not too far away, so I took a day off and went for a look. I wasn't sure what to expect and as an experiment I went armed only with the Fuji and it's native lens. Apart from broad views that would mean having to be in close. Not that I was really there on a photographic mission. If I had been I'd have taken a proper camera...

I expected a good attendance but wasn't prepared for the number of cars and trucks parked in the fields around the show itself. Once inside the marquees and sheds it was a struggle to go against the flow of people. It was packed. 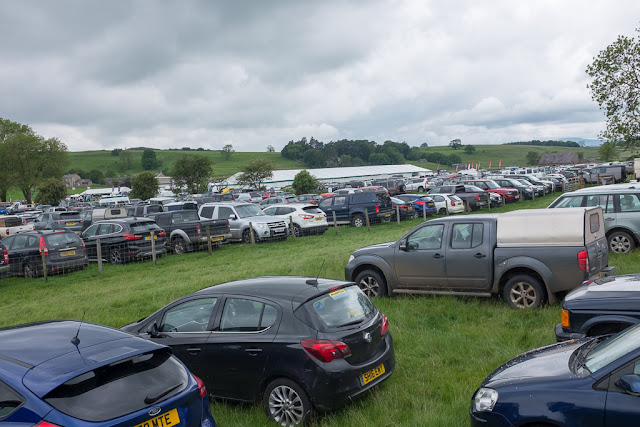 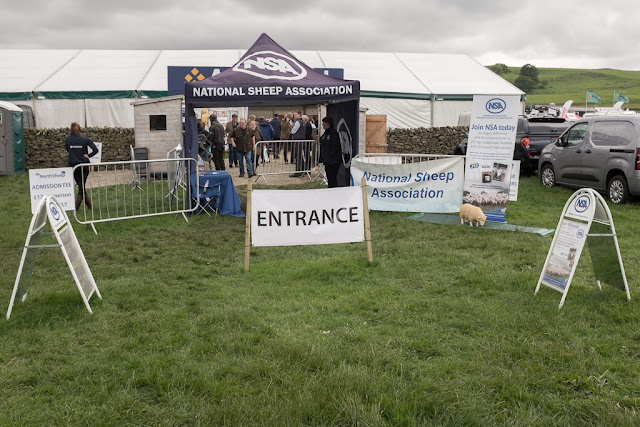 While having the atmosphere of an agricultural show which hasn't taken the route of trying to attract people for a family days out  North Sheep is more a rural trade show. There were feed and seed merchant stands, sheep handling kit displays and all manner of agricultural kit. naturally the main focus was on the sheep breed societies stands and those of individual breeders. Some had obviously spent more than a few bob on their display and marketing material. 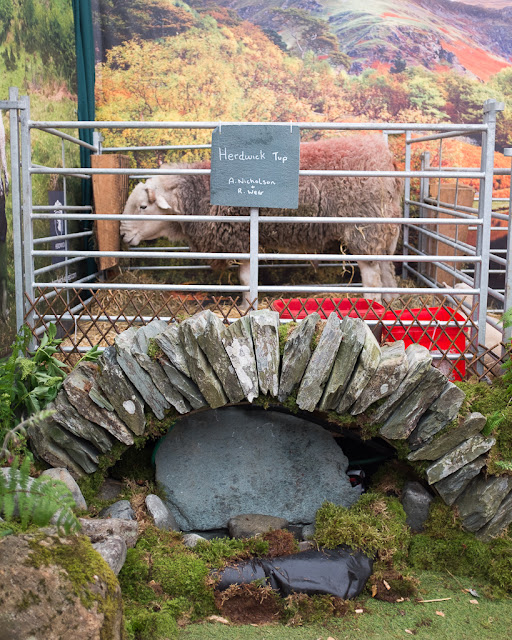 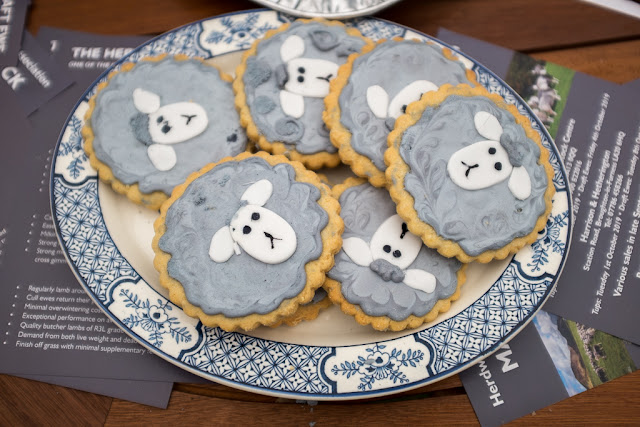 There were lots of sheep to look at, and some of them were friendly. 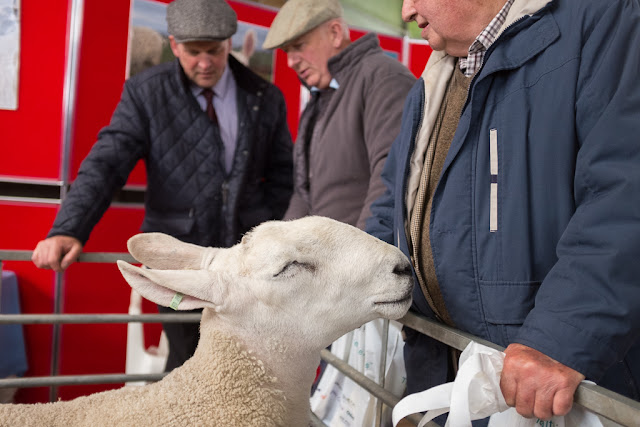 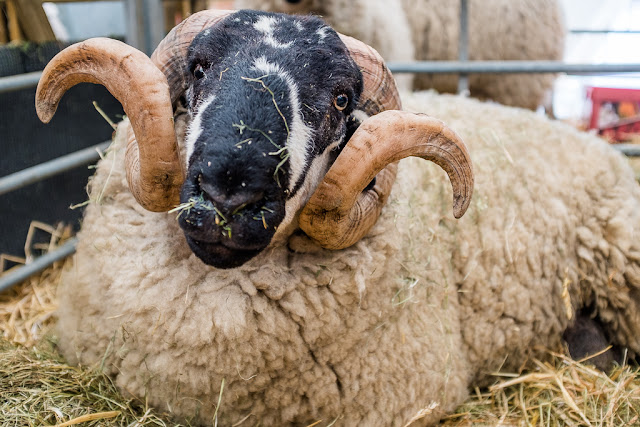 Aside from a row of food and drink vendors attractions were all sheep related. There was a farm tour for which the queue was even longer than for the toilets. Then there was a sheep dog display with a very quietly working dog. 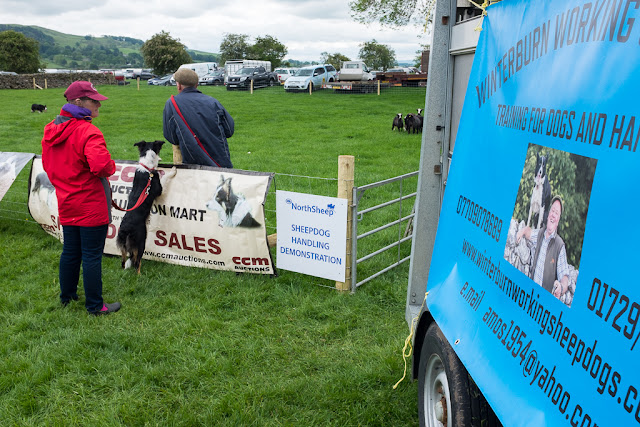 The local Young Farmers had a display and were running a stock judging competition. 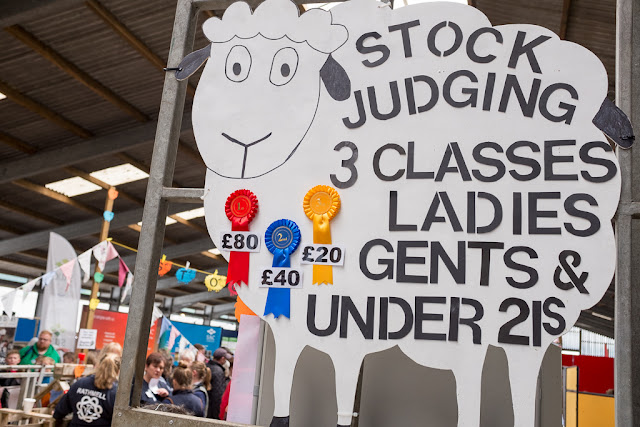 Young Farmers were also involved in a three way shearing competition. Cumbria, Yorkshire (on home turf) and Lancashire competing in a team event which judged not only on speed but on fleece handling and packing. I couldn't get close top the action without barging my way in, so I stood at the end of the shed and held the camera up, shading the screen to make it half way viewable for framing. With the camera in high speed shooting mode I pretty much sprayed and prayed. One burst was out of focus, one poorly framed but others weren't too bad.

An advantage of the X100T is that even in burst mode it's almost silent as it not only lacks a mirror but it has a leaf shutter. Disturbance for teh shearing team and the audience was pretty much nil. 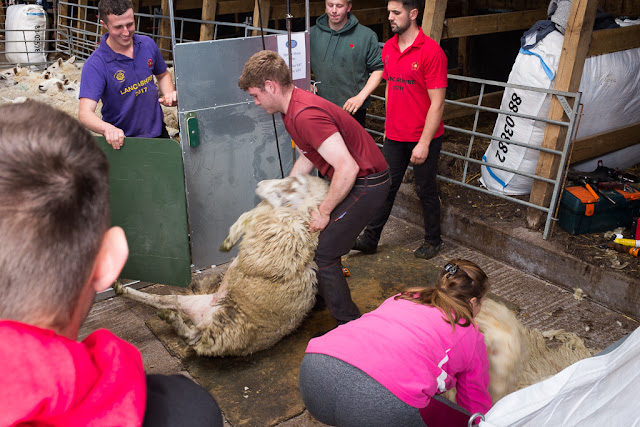 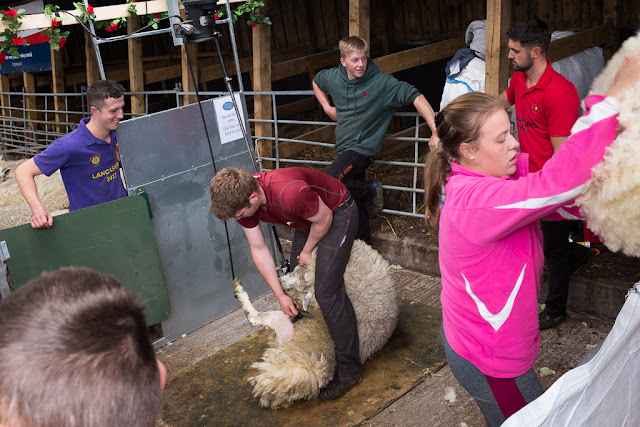 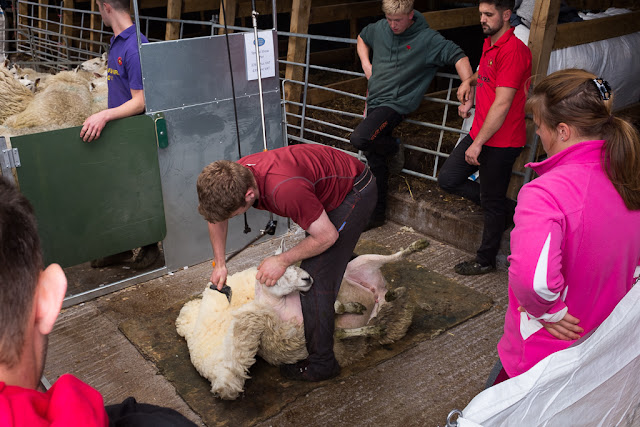 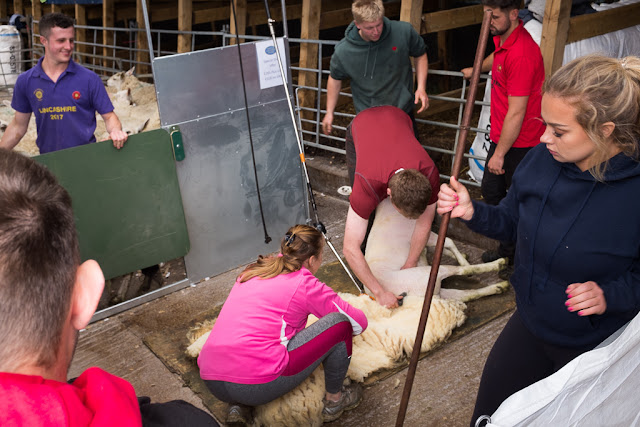 I guess I got lucky with the viewpoint as very little is obscured and yet there is a lot going on, particularly in the final frame here.

After about four hours I had seen everything I wanted to see, twice.Despite the single fixed lens I hadn't felt restricted. A zoom, even of moderate focal length, would probably have resulted in more isolated detail pictures. But I doubt they'd have been any more interesting than the pictures I came away with. It was both liberating (not having to carry lots of stuff or think about zooming in or out) and challenging in a good way (it made me think about what to photograph and how to frame shots). Whether I could take the same approach to a sheep dog trial, I'm not sure. I'd certainly not get many action shots!

However... The camera continued to frustrate me with it's bloody stupid focusing. I know I should set it to manual and use the back button to focus, but that's still slow and results in missed shots. I laos found a downside to having face detects enabled. When there are no faces, or they are very small in the frame, the focusing works as if the feature were disabled. Centre point and recompose works fine. But when there is a face in shot and it's not what you want in focus the camera votes against you!

While there is much I like about the camera the best thing for it is to get sold. That way I'll stop using it. I can use my expensive compact almost the same way as I do the Fuji and suffer similar frustrations. I don't need two annoying, but capable, cameras. No doubt ten camera manufacturers could make a small and nimble camera which handles and performs just like a DSLR. But then people wouldn't buy DSLRs! Oh well.
Posted by Dave Lumb at 22:09