With show season over for another summer the autumn sheep sales are taking off. With work boxed off for the week and nothing planed for outdoors thanks to another rainy forecast Friday seemed like a good opportunity to take a look at the new lighting in the sale ring at my nearest auction mart. Besides, there were Lonks... 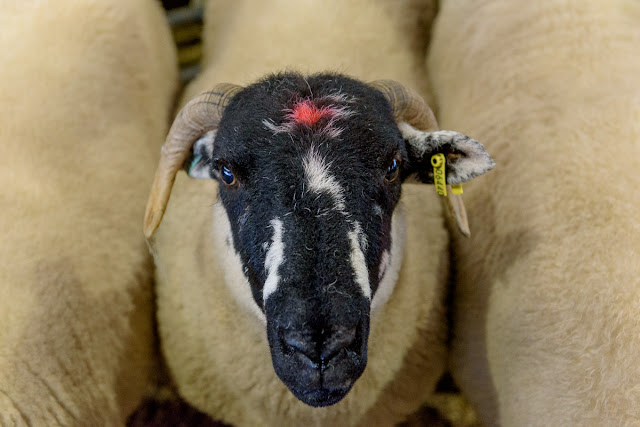 The light in the main shed was unchanged, a mix of daylight and artificial. Not very bright at that. But it's not much of a challenge given the wizardry of  modern cameras' ability to cope with low light levels. Thanks to a broken down lorry at a set of traffic lights I was delayed by fifteen minutes and all the unloading was over when I turned up. To be honest I was feeling dispirited and went for a walk. By the time I returned the sale was about to start so I stuck around.

What a difference the new lighting, LEDs by the look of it, has made. Not only is there just one colour temperature to cope with the flickering fluorescent tubes have gone and it seemed brighter. 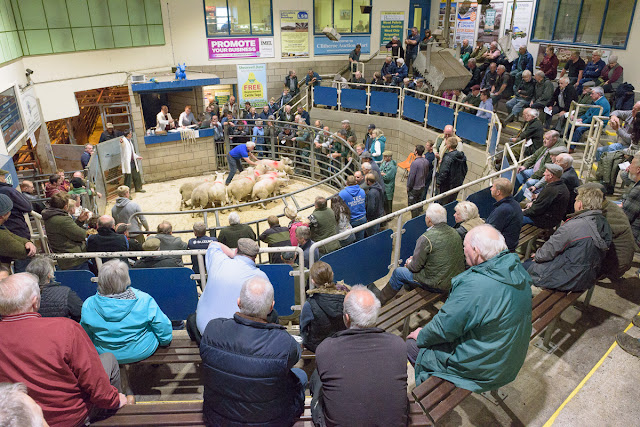 I wasn't restricted to shutter speeds of 1/100th or slower to avoid the effects of the tubes and could push it  to 1/250th and still have a reasonable aperture to get some depth of field. This was helpful because I'd packed my slow longer zoom which I used to photograph the auctioneer's podium and close ups of sheep. 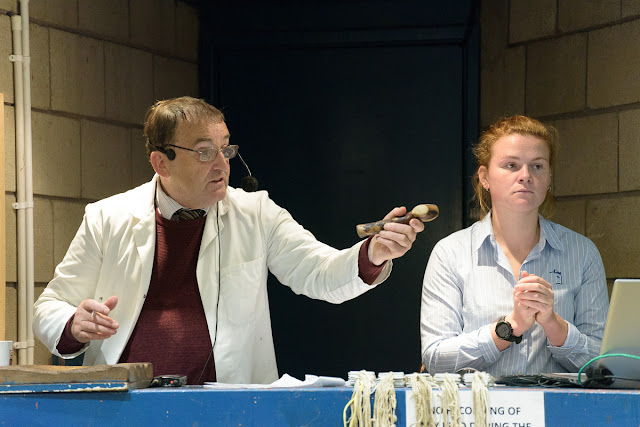 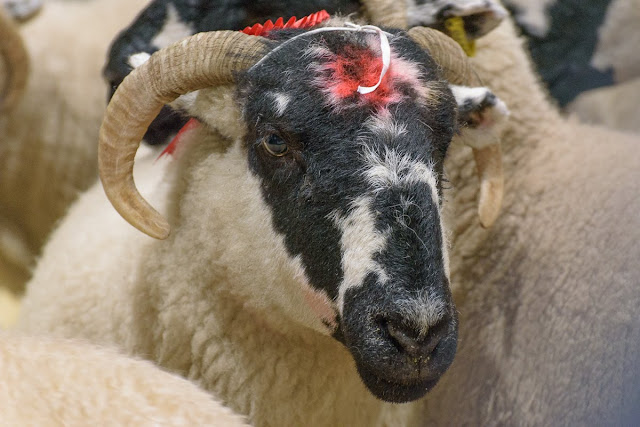 The best chances for 'action' shots are at ringside, but I don't like taking up a spot which could be occupied by someone there on business. However, as the sale progressed room came available and I moved in to fill the gap. I tried using live view and the flippy screen, but yet again found it wanting and went back to the viewfinder. This worked much better, especially when I dropped the shutter speed to get some motion blur.  My dismal mood had lifted, but all too soon the sale was over. 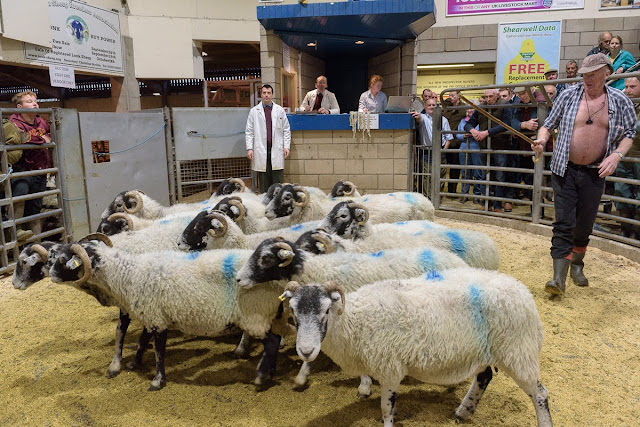 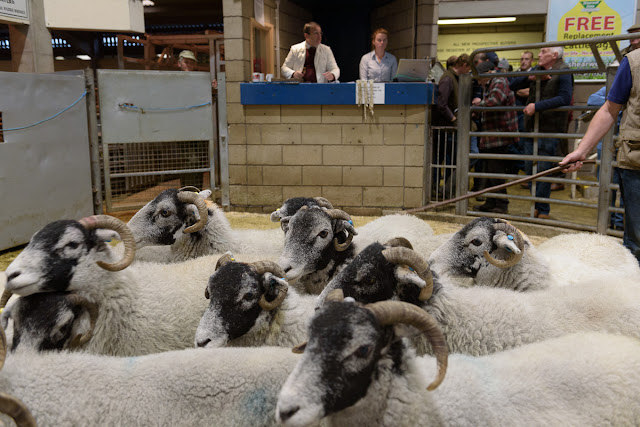 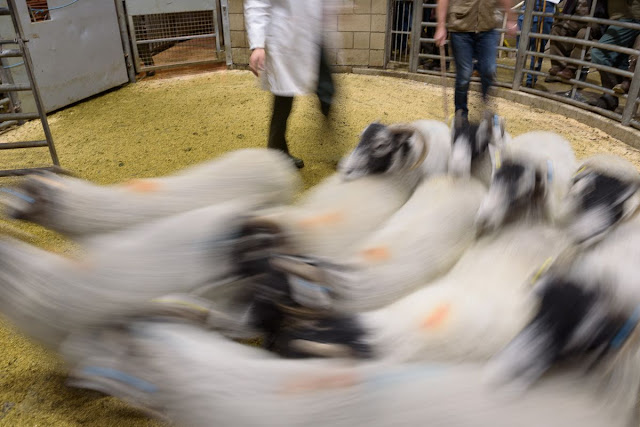 The weather on Saturday morning had taken a turn for the worse. It was o bad that I almost abandoned any thoughts of going outside. Like a fool I had got up early and with a little work soon done I took a chance. Unfortunately the rain and low cloud, plus a stupid detour of my own making, got me really hacked off. If the rain hadn't stopped by the time I got to the sheep dog trial I would have gone home without getting a camera out. I very nearly didn't bother as it was. I really couldn't see anything worth photographing. Just more of the same old same old. Still, nothing ventured. 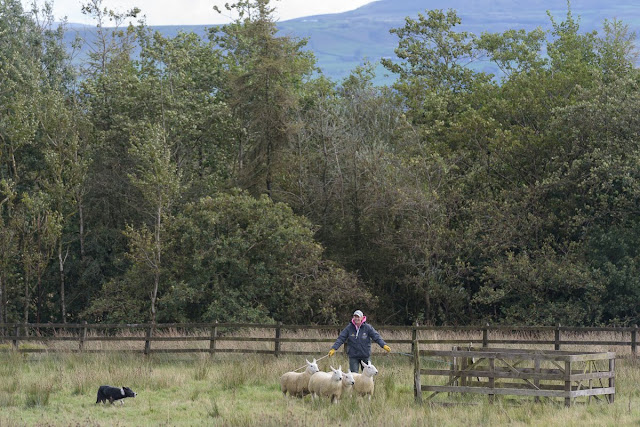 Things weren't all that conducive to getting action shots. The layout was a bit awkward, and the sheep weren't at all cooperative. Even some of the dogs got lost looking for the sheep. As I arrived over two hours after the trial had started there weren't many folk about either. I pottered about looking for different angles without any real success.

Perseverance sort of paid off. Just as I was getting fed up I saw the dog on a quad watching the action with a couple of people and their dogs doing the same. I took loads more shots than I often do of such scenes (I had plenty of room on the memory card...) looking for the best angle, depth of field, and combination of elements and gesture. I'm not sure I got it 100% right. 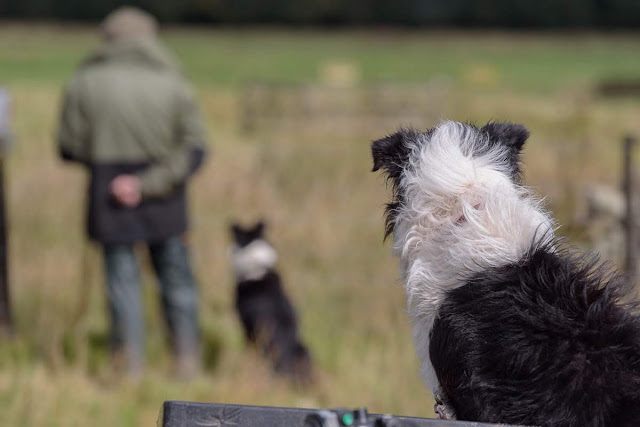 It's a pity that the paperwork seems to always get done in a vehicle at the trials, or in the back of a livestock trailer, as that is one element of the events which I have very few pictures. 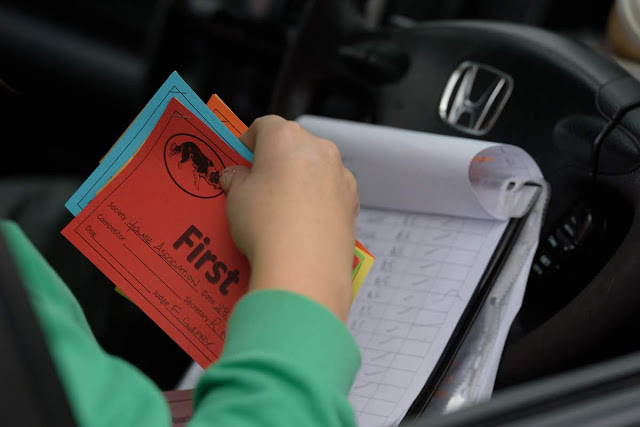 After about three hours with only a few sheep penned boredom was setting in. When I'm not in the right frame of mind it's always a toss up between trying to break out of it or admit defeat. Rather than hang around I gave up. On the way home I felt like giving up on these sheepy subjects completely and on taking photographs in general. What's the point of taking pictures which will hardly get seen? 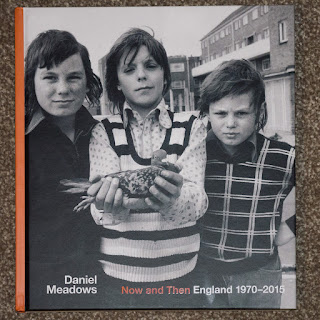 My gloom was lifted a little when I got home to find that a book I'd forgotten I'd pre-ordered was waiting for me. Although I had promised myself to stop buying books of photographs taken thirty or forty years ago the Daniel Meadows book had to be an exception as I admire his work so much. Not just because the pictures are good but also because he makes recordings of the people in many of them. The photographs are placed in context which a lot of contemporary (art) documentary photography doesn't.

The book itself, Now and Then: England 1970-2015, is just the right size to hold easily and flick through or read. Unlike a lot of books coming out these days it's reasonably priced too. With 160 pages containing over 100 photos it's a bargain at £25. Available here.

What strikes me most about Meadows's work is it's unpretentiousness and its sincerity. Not that there isn't an agenda. Everyone has an agenda.

There's a related exhibition at The Bodliean in Oxford next month which is a bit far for me. Closer to home Meadows is included in a show on the Wirral at the Williamson. This looks like it should be worth a visit, but I'll probably not manage it as it's the wrong side of the Mersey for me

Am I feeling any more positive now? Not really.