Summer returned. Leaving stuff to dry I went in search of odonates. My first task was to try and get a closer look at the darter I'd seen at the litter pit craters. This time I took my wellies so I could paddle among the horsetails. Although the crater is tiny there were small carp crusing between the stems that almost fill it. Horsetails are ancient plants, and dragonflies are ancient insects. The two go well together. Almost straight away a femal common darter flew up, then I saw a male. It took a while, but patience paid off and one of the two I saw took to landing on some drying ground. It would return to the same place and I managed to get as close as the lens would allow. 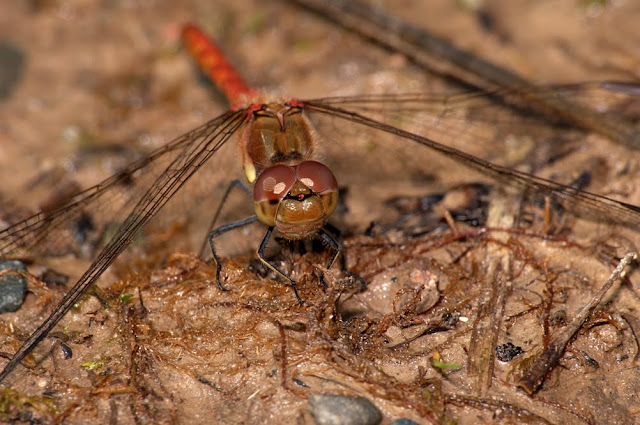 Common darter
There were plenty of damsels around. Blue-tailed ones for the most part. I wasn't going to photograph any until I saw one that looked to be covered in something nasty. At first I thought it was dead and stuck to the stem, but it flew off a foot or two. 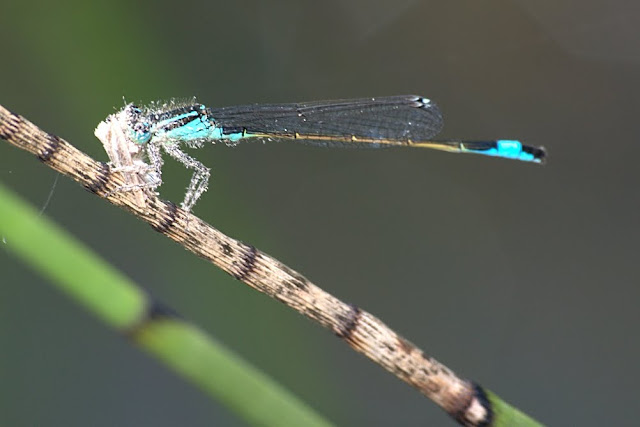 Blue-tailed damsel in a bad way
Also in evidence were a a brown hawker (which I managed to sneak up on when it was perching and got an almost okay shot of it) couple of male emperors. One was patrolling the bigger pond, the other was over the largest crater. This confined body of water allowed me to get close to the insect, and limited it's flight opportunities. If I had stuck around longer I might have improved on the flight shot below. 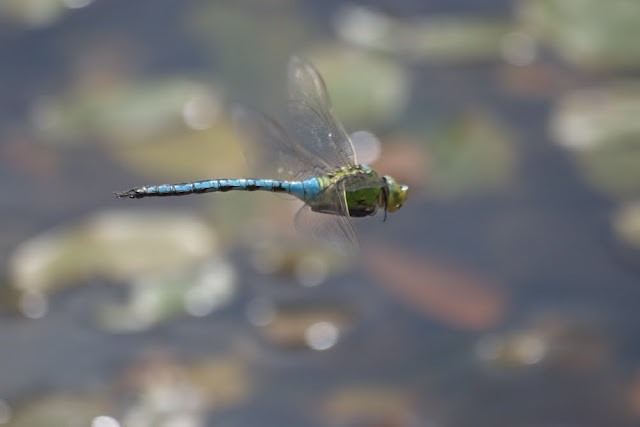 Male emperor
Would there be anything at the newt ponds? At first it seemed very quiet apart from butterflies. Gatekeepers and a few skippers were about, plus some whites. Damsels were hard to find, a single emerald being the highlight at the larger pond. Passing the hidden pond on my way to the smallest one I was surprised to see a shoal of rudd cruising about at the surface. I'd assumed the pond to be silted and fishless, but it looked much clearer than before and those definitely were fish! 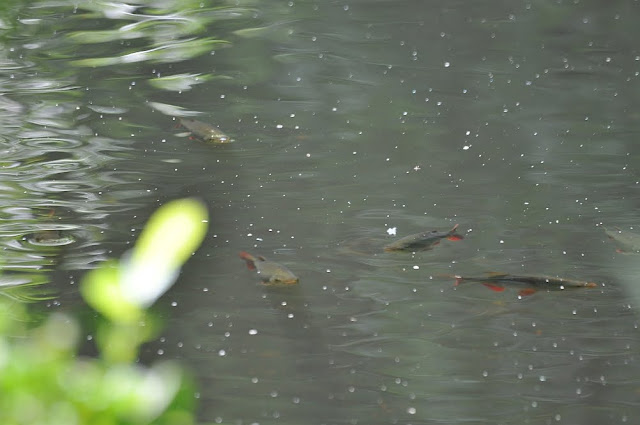 Unexpected rudd
The small pond was also lacking damsels, although there was an emerald in the usual spot. A brown hawker flew over the hawthorns, as one had done on my last visit, and when I returned to the larger pond (having noted deer tracks on the way) I spent a few minutes watching hawker working the pond and surrounding trees and grassland.

Time was getting on. A call at the dragonfly pond was in order. There's a £1 parking fee there. I checked my pocket for change and found I had no pound coins. So I passed on that idea nd headed for home.