Sunshine after rain can make for great light and opportunities. It was the flash of lime green which caught my eye initially, followed by the dark and light verticals. Or that's how I assume it must have happened. It was certainly the light. The chap down the side street could have been a useful element but didn't fit my vision for what might be possible. As people walked by the window I realised there was a pool of light falling near the kerb corner when the elderly couple came into the frame. I tried to fire off three shots to time their placement and the dratted focus lag on the camera let me down.

A split second sooner and there would have been more of the guy in the alley visible which would have been disconnected to the main seen, but possibly adding a counterpoint. The imaginary gaze of the 'young' mannequin directed towards the couple placed in that shaft of light almost makes an interesting picture. The light, colours (green and maroon) and the dark and light verticals create a visually interesting stage for the action. I guess I should have stuck around to see if any other players set foot upon it. 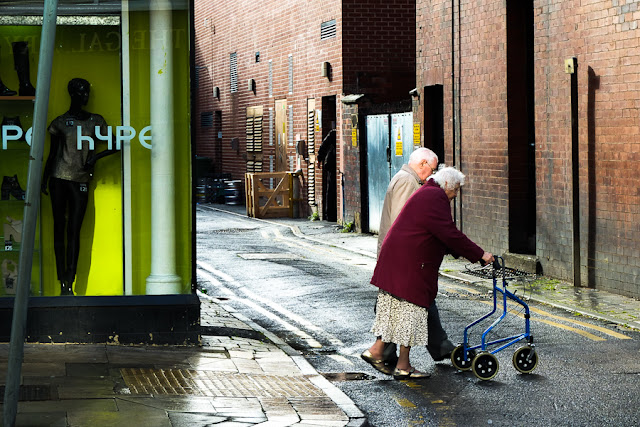 The focus lag annoyed me and I moved on in the direction of the camera shop to see if there is such a thing as a small, fast focusing camera. I tried out one which seemed good on paper in the shop but it was slower than the X10. I tried a second, which I had handled before, and it seemed snappier so I stuck a memory card in it and took it outside. In practice it wasn't much better than the X10. The quality of the files didn't seem much better than those from the X10 either. Nicer than my Panasonic, which actually performs quite well, but not worth the price tag to me - not even at used prices. 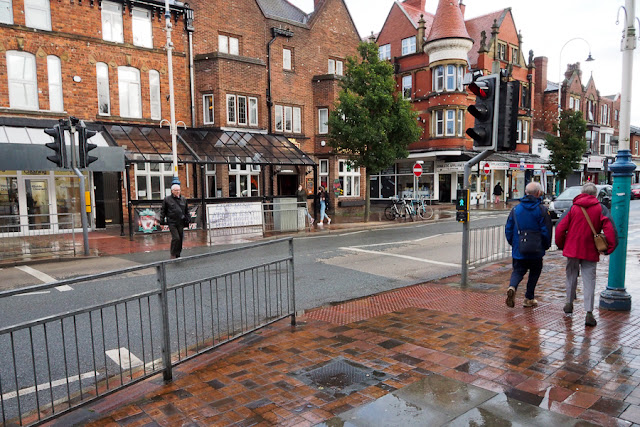 If I didn't already have DSLR gear such a camera would probably be appealing. It felt good in the hand and the files are certainly good enough. Maybe my logic is flawed, but a smaller camera ought to offer a considerable cost saving over a larger one in my mind!

There are two more cameras I have in mind as 'walkabouts'. If neither of those perform as I'd like then I'll have to stop blaming the tools and work at using the one I've got differently instead of trying to make it work the way I wish it would. If that fails I'll give up and stick to what I know works. I just wish it was small enough to fit in a coat pocket.