I'm not sure if my recent thinking about black and white photography was prompted by the discussions over at The Online Photographer or not, but those have made be think about it more. Specifically the 'seeing pictures' in black and white thing. With another trip to the 'big city' of Preston planned I decided to set the compact to shoot raw and JPEG - but set to black and white. That would make teh screen and EVF show what the camera saw in monochrome but I'd have the colour version to compare the results to in the raw file. What occurred surprised me.

A rainy day in town always suits monochrome to my mind. And I like umbrellas. They make interesting shapes. I also took a walk through the underpass to Preston's loved-and-loathed bus station. The underpass is tiled in white with black grouting and there's not much in the way of colour to be seen. Ideal for both seeing and shooting in black and white. On the back of the camera I reckoned everything I'd shot worked okay without the colour. Even the street scenes and other random rubbish. It was a different story on the PC. 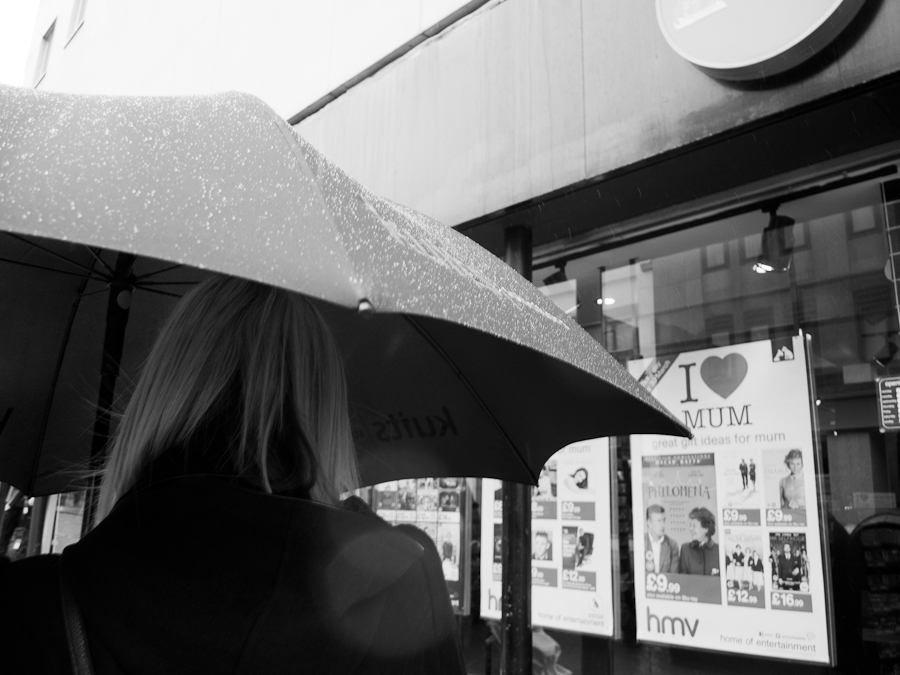 The picture above was the one that made me realise I had been seeing pictures in colour even though the camera was showing me them in black and white. Shown in all it's colourful glory I must have subconsciously picked up on the magenta lettering on the umbrella and connected it with the heart and the rest of the poster in the window plus the shop sign. There were too many similar examples for this to be a coincidence. 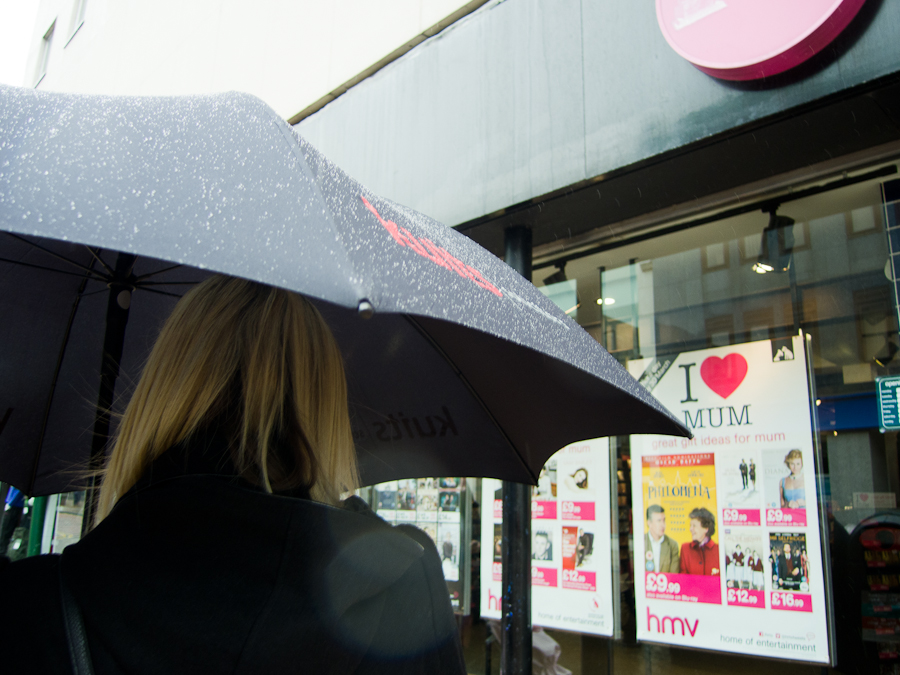 In the underpass there were one or two examples were I'd quite obviously seen the touches of colour which made the pictures. Not that they are great pictures, but they are pictures - I think. 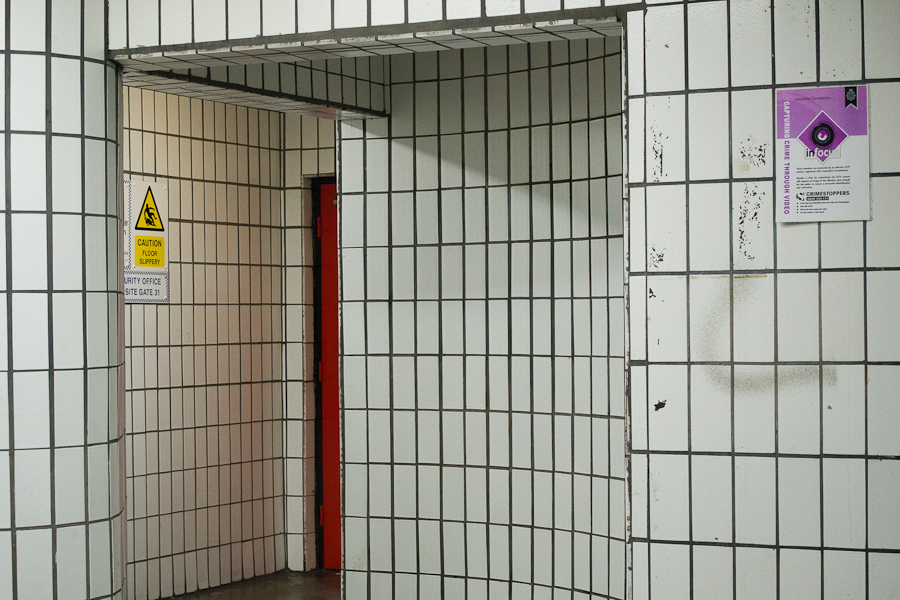 It's strange, but I like shooting for a brief period like this. It makes you look and think faster than if you have all day to ponder over compositions. It might not be the optimal way to operate, but every now and then it can be good. It's certainly blown away the cobwebs and dispelled my recent despondency. For some reason I like this photograph of a photograph. I saw it and passed it by, then went back and made the picture. It's pretty clear that it was the colour that made me see the picture and the colour that makes it work. I really like the way it looks like two photographs composited - which it is, in a way. 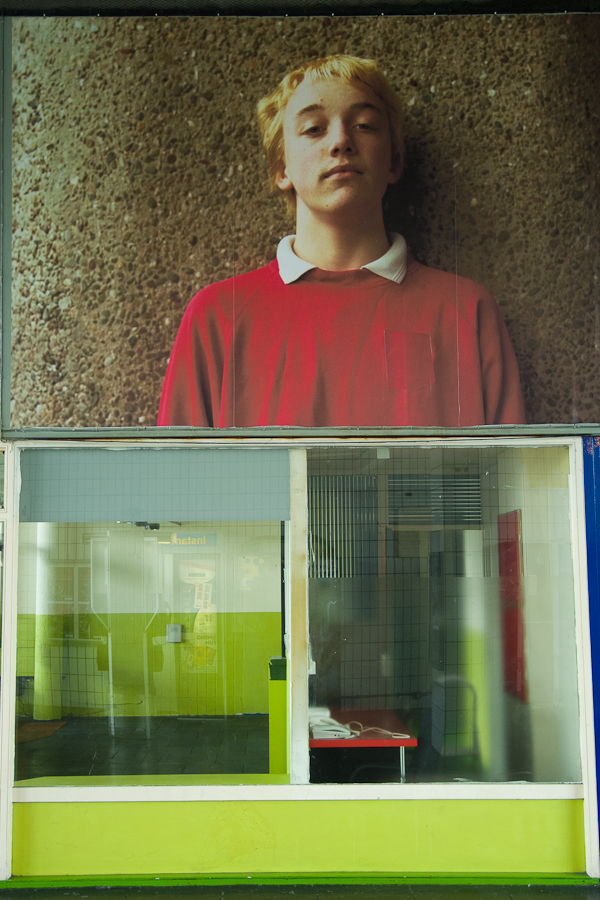 The camera is great for this kind of exercise. It's small and can be operated with one hand - I fire the shutter using my thumb! Mostly I used the rear screen for composing images, sometimes the viewfinder (generally with the lens zoomed out) and occasionally I shot from the hip. It handles well enough. However... The time it takes to write data to the card (even with the faster card I was using) meant a couple of missed shots. The delay between focusing and firing likewise. There's also a lag when switching from screen to EVF. Then there's the lens distortion, which is unfortunately worst at my preferred focal length.

The trip ended on a happy note. In these days of every middle-aged bloke with a beard and a camera being eyed with suspicion (or so the photo-forums would have it) it was amusing and encouraging for a chap to shout across the road for me to take his photograph! Pity I made a crap picture. 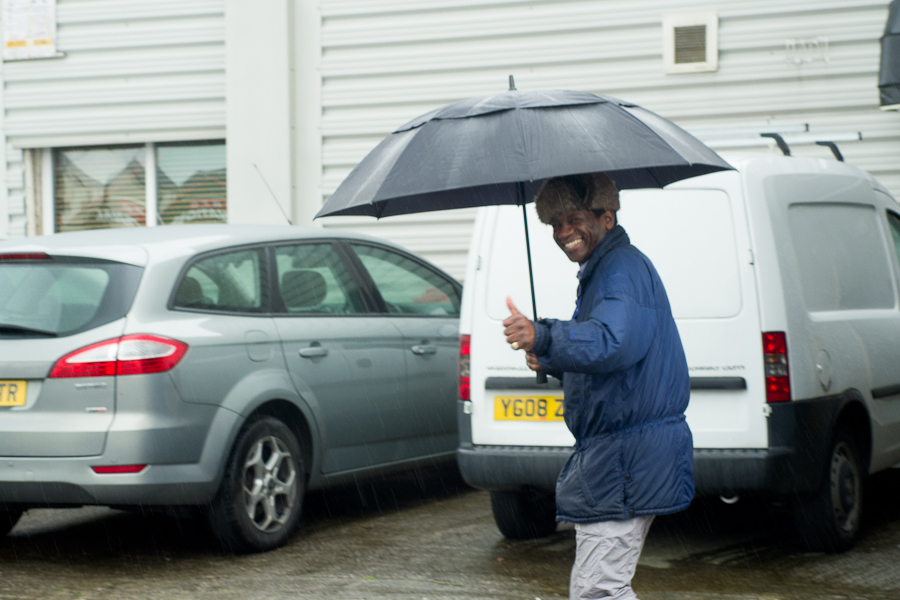 Take away points: I now see pictures in colour; there's a lot to photograph in towns and the bigger the town there more of it there is; rain is great for photography; rear screen composition isn't all that bad; small, light cameras are good fun.

There's a bit of a slideshow here.