Sea Change - thoughts from an exhibition 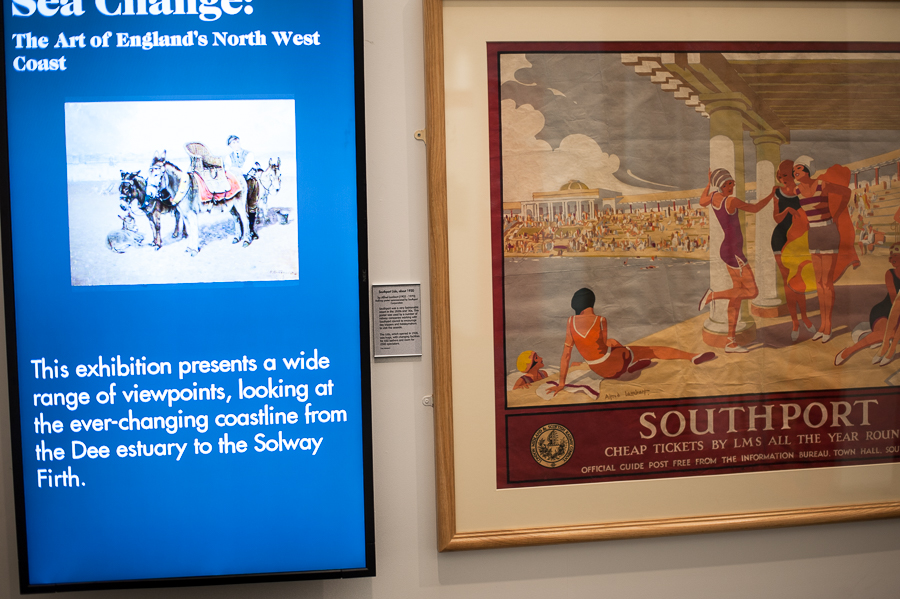 Twice since it opened I've tried to visit an exhibition I'd been looking forward to at The Atkinson in Southport. Gallery staff must be even lazier than librarians because both times it hadn't opened by ten o'clock. Third time lucky when I waited until the idle gits had had their lunch!

The exhibition is called Sea Change and is of art relating to the coast of the England's north west. There are paintings drawn from the gallery's collection alongside works on loan. There's a parallel exhibition of postcard art, and another of lantern slides of old  Southport. Although billed as separate exhibitions they complement each other well with photography playing a large part throughout.

Something that struck me when looking at two paintings superficially similar in style was the difference between good art and okay art.

The Helen Bradley on the left has 'stick' figures as does the Lowry on the right. However two factors differentiate the two. The Lowry picture has a unifying structure to its composition, the figures being a part of it. Bradley's figures are placed at random, and more importantly on close inspection they look like 'Fuzzy Felt' figures dropped onto a flat surface. Although the Lowry seems simplistic there is space in the picture. Partly as a result of careful drawing, but also because of the use of tone and colour on the sand. Bradley's sand is all one tone and, despite the drawn perspective, flat. Her figures don't stand on the beach like Lowry's do. They hover over it. Which goes to show that it's easy to ape a stylistic mannerism like stick-people, but unless you fully grasp what it is built on (draughtsmanship and close looking) you only make a pastiche. 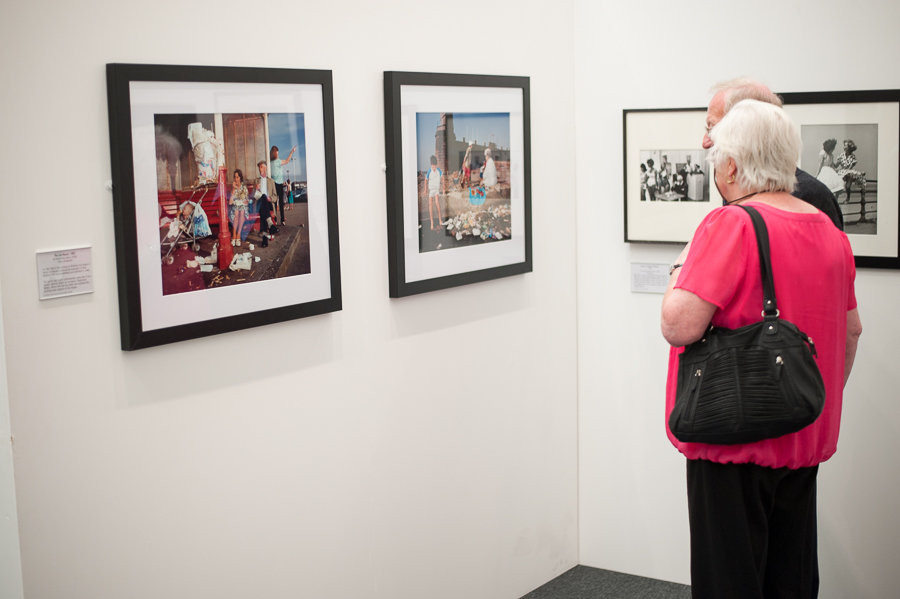 I'd been looking forward to seeing which pictures of Martin Parr's had been selected , and to see what they looked like as prints. Both on show were, unsurprisingly, from The Last Resort. To be honest, as objects, the 'real' prints didn't set me swooning over any magical properties. Nor did any of the other photographic prints on show. I really don't get the fuss some people make about 'fine prints' Maybe they weren't 'fine' enough!

Although they hadn't been billed in the advertising it was nice to see a couple of Tony Ray-Jones prints and a famous Bert Hardy. These were black and white prints on a small scale compared to the colour  Parr's. Which brought home to me once more that extra large prints can be a bit of an affection, and a good picture will work well at any scale. It's all down to the picture's structure -as per the Lowry. 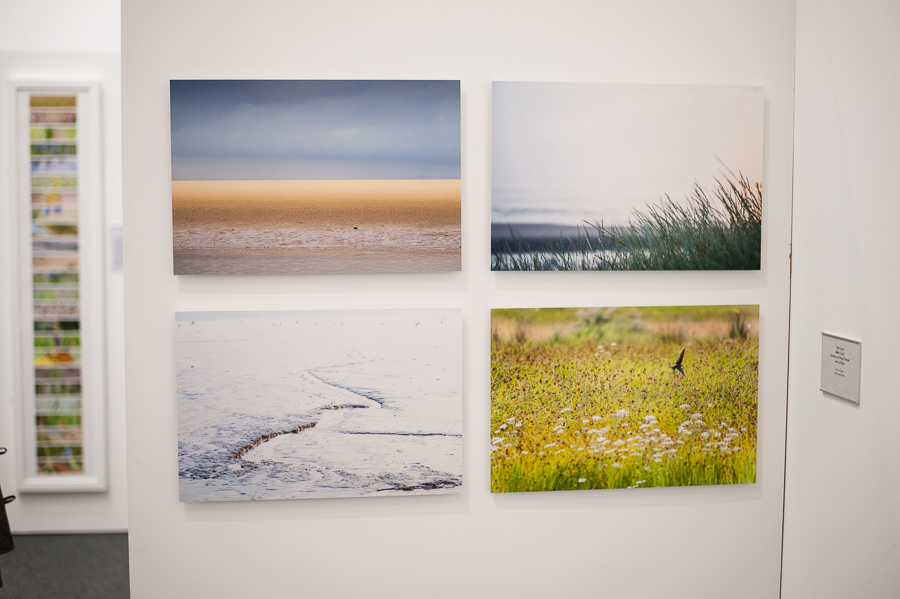 Alongside the photographs mentioned was one by a photographer I wasn't aware of, Paddy Summerfield. It's always nice to be introduced to a 'new' photographer and he's one whose work I'll investigate more. There was another new-to-me name, but on the lines of 'if you can't say anything nice, say nothing, I'll leave it at that, except to say that the Bradley/Lowry comparison seemed applicable when I compared his work to that of another surprise inclusion, a large grid of pictures from John  Darwell's Not Starting from Here series. 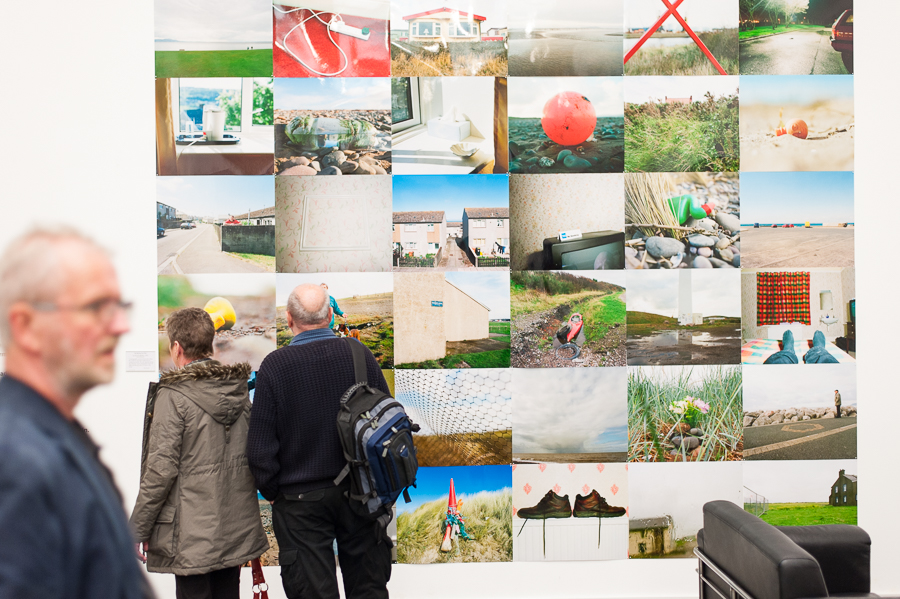 One of the things I like about photography is that pictures can be about small ideas. The postcard exhibition was full of small ideas. Some were rather grandly hung on the walls, mounted and framed, while others were laid out on tables (covered in glass). I much preferred the less precious table top display. Something that could be transferred to photographs, I think. I'll be returning for another visit, to concentrate on the paintings more.

I'd made a couple of pictures on my way to the Atkinson, but looking at the exhibition must have inspired me because I went off for a wander and made some more. I should have stuck with an idea I'd stumbled on beforehand. An accidentally out of focus 'street' shot got me thinking about the difficulties people have taking photographs in public places and the prevailing attitude of paranoia about privacy. Something that's been at the back of my mind for some time. It struck me that by deliberately missing focus you can achieve a degree of anonymity while still presenting a readable picture which can have a structure to it. 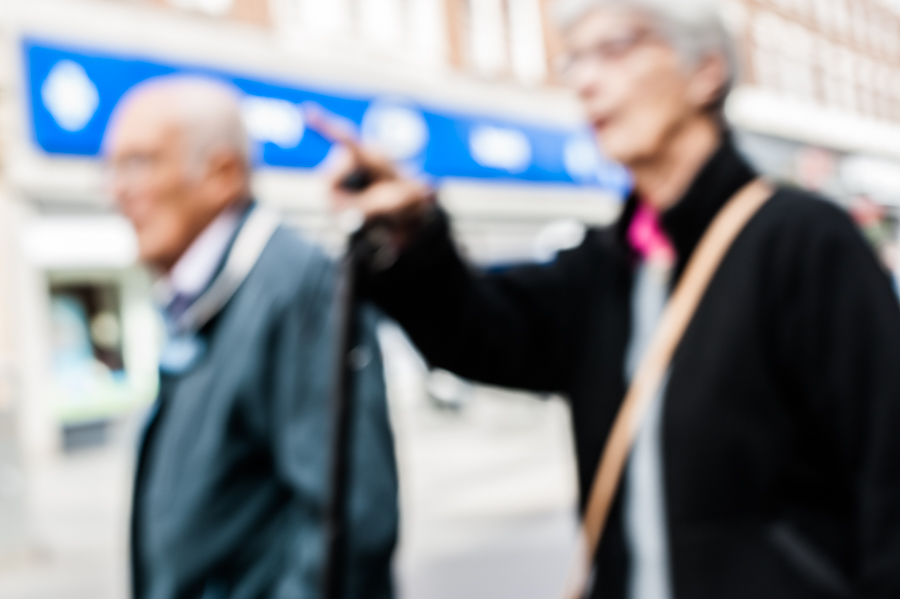 There was a postcard by Richard Hamilton that played around with the nature of photography and how parts of photographs appear as recognisable when small but become meaningless blobs when enlarged. I seem to remember that Tom Phillips had played around with a similar notion too, although more concerned with enlarging details from postcards.

So rather fitting that I photographed two flags later. Here the ability of photography to show the previously unseen (the reverse of what Hamilton is highlighting) was revealed when I viewed the file at 100%. The word 'ENGLAND' on the flags looked wrong. They're being flown upside-down! 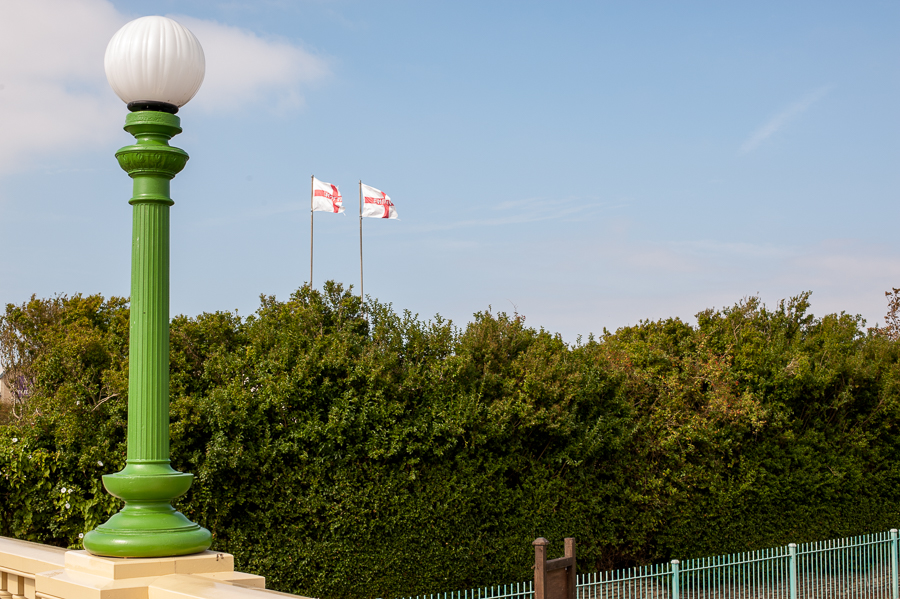