Yer average amateur togger hates it when the sun won't shine. It's a frequent moan on 'that photogaphy forum' (and no doubt others) that the weather is dull and miserable. My advice to the whingers would be 'shut up and shoot', except that it would go down like a lead balloon - pretty much like the advice I do offer usually does!

Today I awoke to fog, and for the first time this winter I have done so I had the day free. I readied the cameras and headed out into the gloom. For once I had something in mind to photograph. Something that required fog, or mist at the very least. It's a bit of a cliché I suppose, but there's this row of trees that I'm sure will make a picture one day. I don't think today was the day though. But I came closer than any tiem before. And all because of the fog. If anything I think there was too much of it! 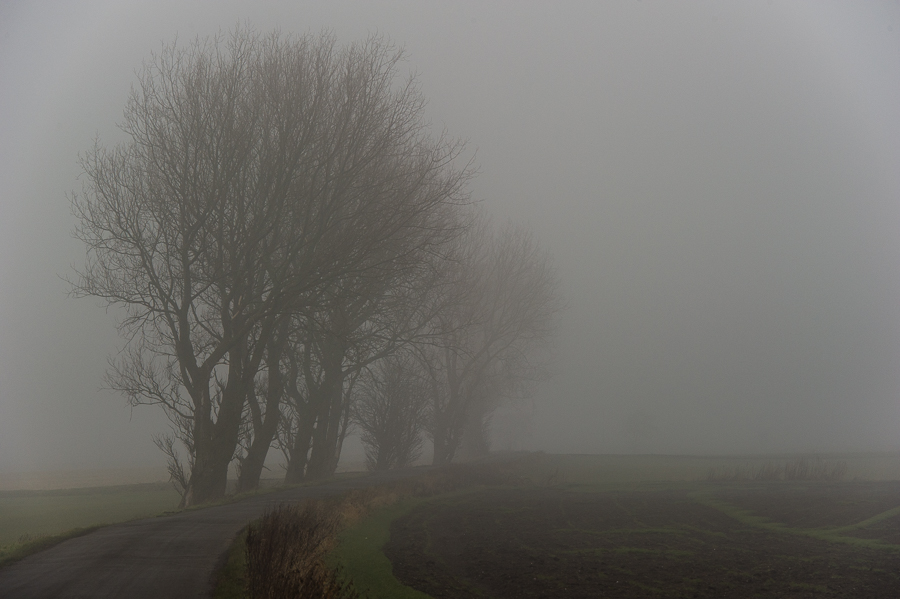 Ever since I first picked up a camera in anger I've like shooting on misty and foggy days. I think it's because of the way everything becomes more graphic and aerial perspective is enhanced. Using a telephoto lens works best for landscape type shots as it exaggerates the fading of tomes with distance, drawing the mist line closer to the foreground. Mist also adds atmosphere to even mundane subjects. 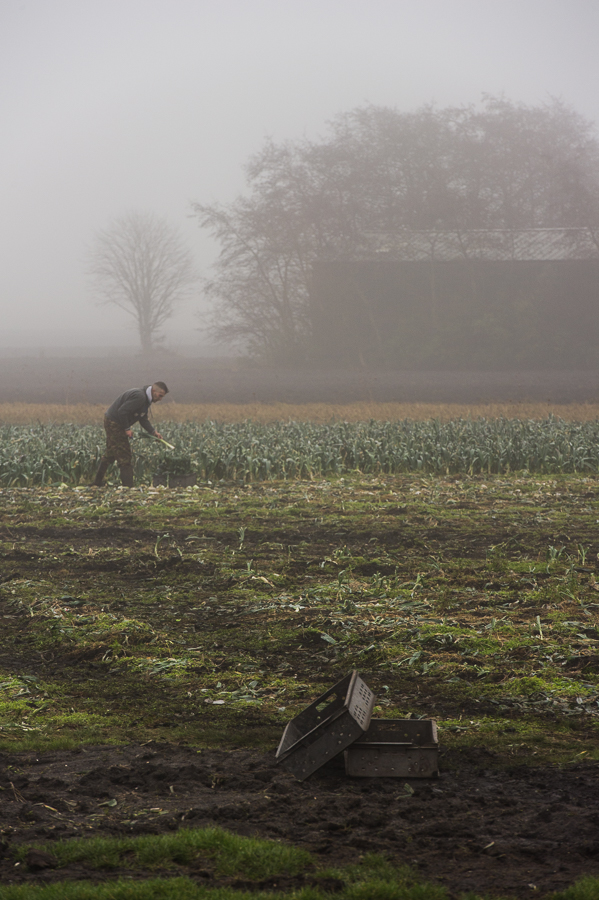 I grabbed a snap of a chap picking leeks, which I quite like, while I was at the trees. Then went on to photograph a field of leeks. I'm not sure what attracts me to leeks but I've made quite a few pictures relating to them of late. Last year sugar beet seemed to be everywhere round here, this season it's leeks!

Leaving the leeks I headed to the sandplant which is changing daily now the diggers are in. Again the mist made for interesting pictures in some ways, but in others a bit more sun might have helped bring out the sense of depth to some of the excavations.

I made a couple of pictures which make me think of some Bomberg landscape paintings of Palestine and also of Paul Nash's WW1 battle field paintings. It's the colour palette and the textures that feel similar to me. Although the sandplant is only a few acres in size it can have the feel of a much grander landscape at times. It's this confusion of scale which I find interesting.

As an aside, it's fascinating to see that while the rabbits are having their burrows in the bunds destroyed they are already tunnelling into the piles of sand being created by the reclamation work. nature never stands still no matter what mankind does to the environment. 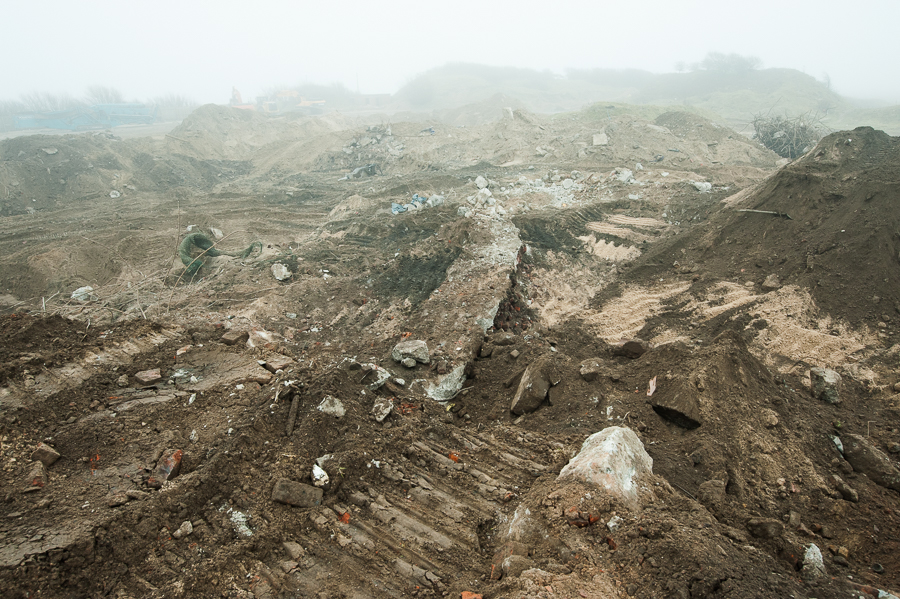 As per usual there's a slideshow/gallery of a selection of pictures from the sandplant visit - here.

With the fog still lingering I carried on to the beach. Somewhere as featureless as a beach might seem a strange place to make use of fog, but there are possibilities. The tide was coming in so I thought I'd try to channel my inner Sugimoto. That proved to be the kind of thing I don't have the patience for and I was soon distracted. What might have been a decent picture was spoiled because I failed to spot the gulls in time and managed to get everything out of focus. It looks okay small though. 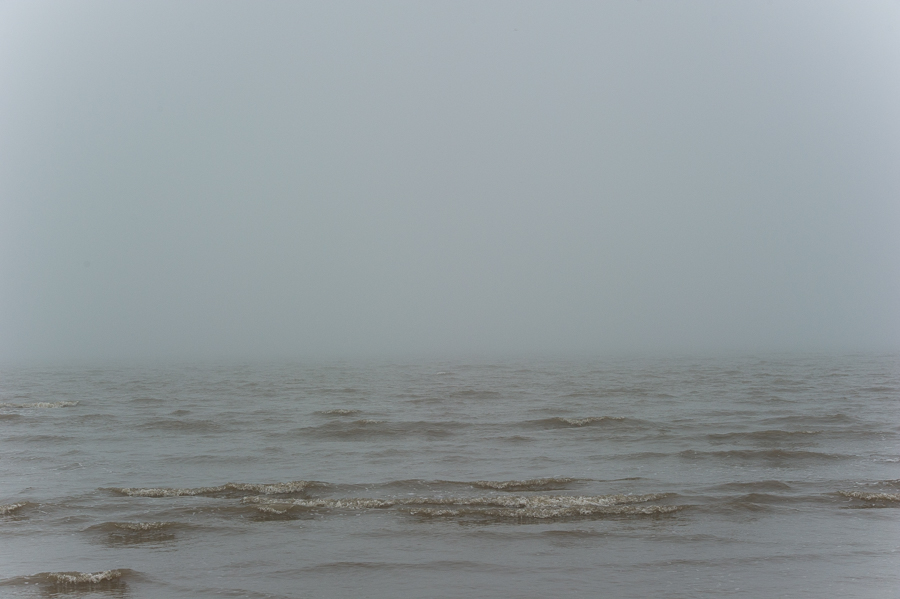 Making Lowryesque beachscapes always appeals to me. A mist enhances the effect. What's really required is a tall stepladder to get an elevated vantage point so the figures appear against the sand. Look at a Lowry street scene and the viewpoint is pretty much always high. Talking of Lowry reminds me that he painted seascapes. Having seen a couple at the Atkinson in Southport recently maybe that was in my mind too. 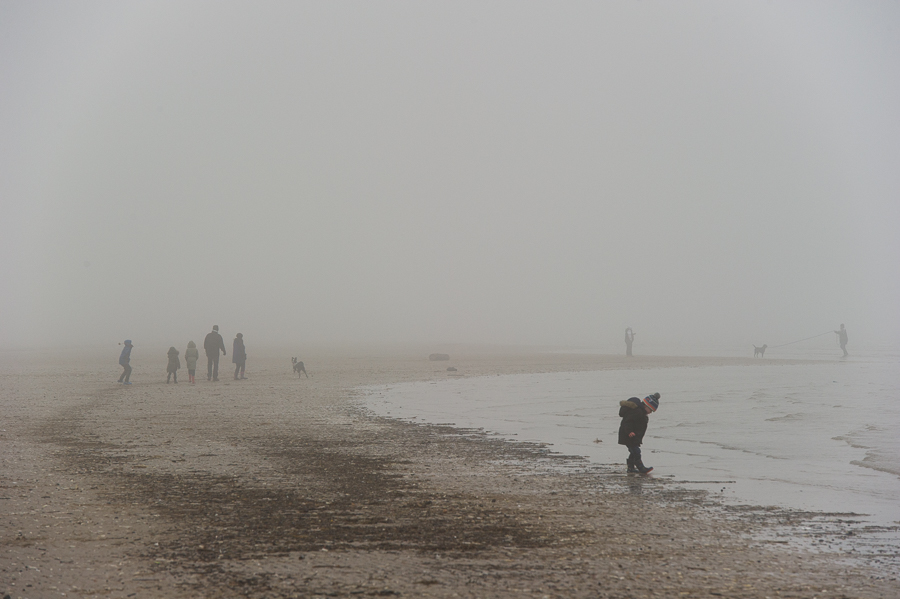 Fog can also be used to create mystery by making details difficult to read. I tried a few shots like this. Putting the point of focus closer to the camera than the subject can often look like an affectation when done in 'good' light, but in mist there's a softening of detail with distance anyway. I'm not sure if the idea worked in thisinstance, but it was worth a try. 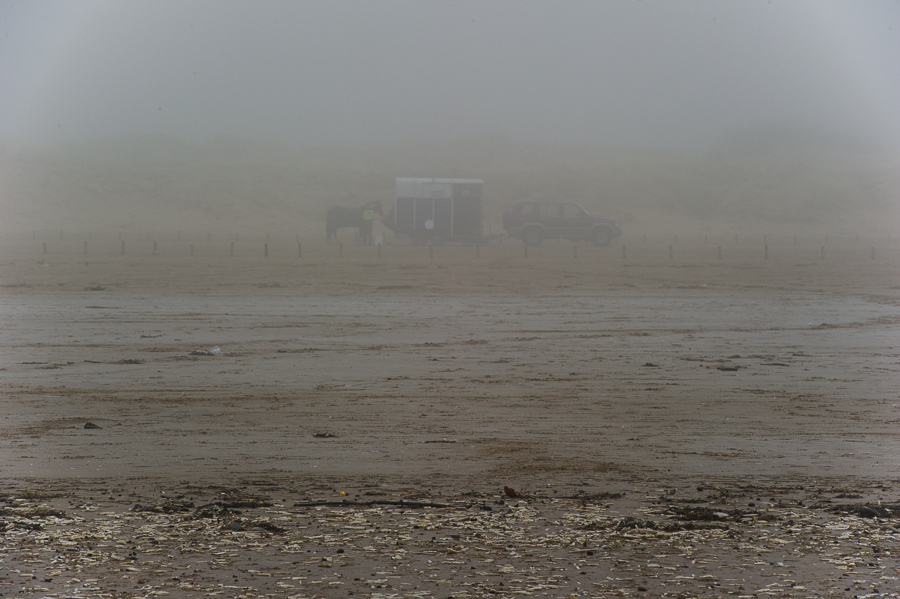 Today's 'take away lesson'? Don't wait for the 'right light', go out and find subjects which suit the weather - whatever it is. If nobody takes photographs on foggy or rainy days people might imagine the UK is permanently bathed in glorious sunshine!