I thought I'd got a new project under way, having started to make photographs in a more focused way of a subject I'd snapped randomly for a while. While the concept behind the project is a good one, that of a social commentary, I don't think it's for me. Even though I can imagine how it might turn out, and it's the sort of thing I'd want to look at, I guess I'm just not sufficiently interested in the subject. That's not to say I won't revisit it some time soon. I think I'm better suited to making comments against something (as with my paranoid concerns that access to the beach might be under threat) rather than as activist in support of worthy causes. or, as with the poultry pictures, showing a subject in an affectionate light.

This was brought home to me when I went out today to get some work done on the 'worthy' project and got derailed into photographing people walking dogs. Now this is a subject that interests me. Not only have I photographed people with dogs on leads in the past but Keith Arnatt's series of portraits of people with their dogs is one of my all time favourites which I've wanted to pay homage to for some time. Maybe it's the initial euphoria of coming home with a lot of pictures on a theme I enjoy, but I think I might have found a way to get into this.

Taking my own series of portraits would have been a bit too lazy to my way of thinking, although it did cross my mind. Apart from the dog walker portraits I made on the beach I haven't pursued this line. I think a nagging doubt has held me back. Taking candid shots throws in an alternative slant on the subject. Using a wide(ish) lens in close adds context, and by framing to include unconnected people doing unconnected things another layer of information is added. 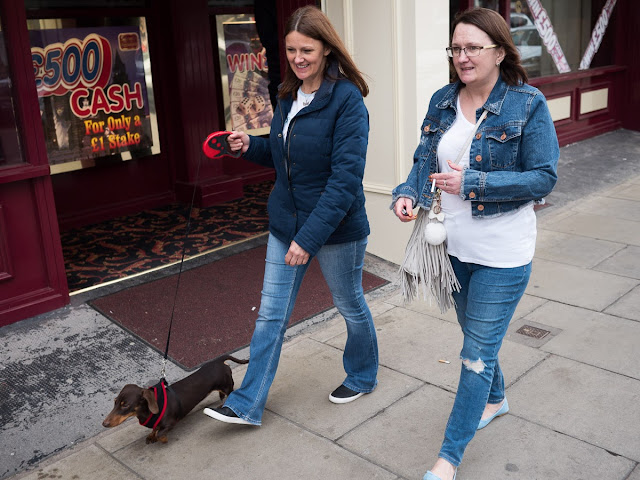 Perhaps reading about Joel Meyerowitz's approach to street photography recently has rubbed of, although I've been thinking along similar lines for my photographs for a while now. The idea of having multiple subjects and points of interest in one frame. Doing the opposite of simplifying the pictures. Far more difficult to include stuff that adds to a picture than eliminate distractions - which is what the traditional thinking is. Although the pictures all include at least one dog (I tried to get more than one in the frame if I could) they are not always the most interesting subject. The whole scene is what I started to think about.

Then there's the loosening up that I started to appreciate with my early poultry pictures. Stopping fretting over getting everything levelled up and having things chopped up by the edge of the frame. I doubt I'd get many likes for this sort of picture on social media, but it's an inspiring way to work. 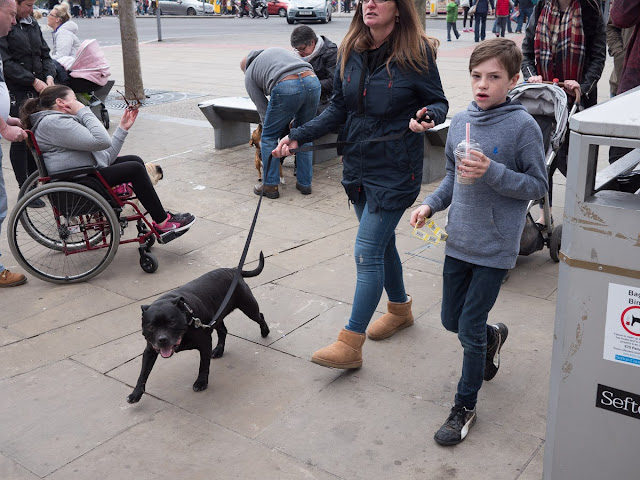 Whether the toy camera really was less threatening I found it worked well. At least after I'd made a couple of adjustments to eliminate some niggles in handling. Trying to get out of the mindset of wanting it to handle and behave like a DSLR is taking some doing. Although I'd taken a selection of lenses I stuck with one all the time and soon got tuned in to its angle of view. However, by using it's fast, and silent, frame rate (something I almost never use with a proper camera, not even for fast action) I raised the camera to my eye framing a little wide and kept walking, letting the action unroll as the view narrowed. Even though everyone twigged me nobody said a word. A couple even smiled. I guess photographing dogs isn't threatening. And then using a wide lens they don't realise how much is in the frame. 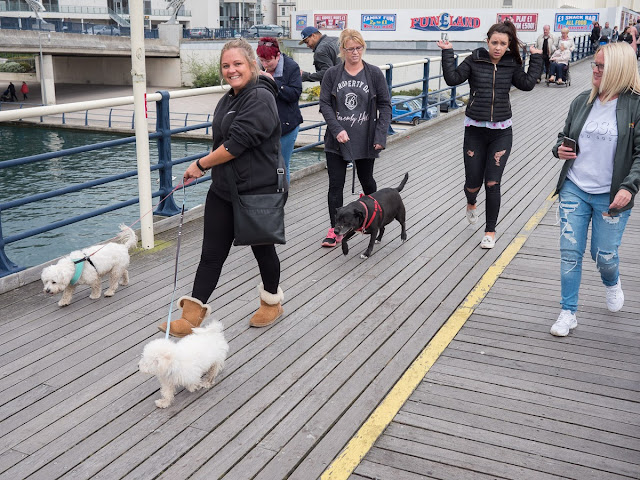 Looking at the little TV in the viewfinder works a lot better for me when it comes to framing shots than using the rear screen. I have no idea why. It's odd, but although I had the aspect ratio set to 3:2 I processed everything a little taller using the whole of the captured images at 4:3. A handy little feature of the toy camera. The silent shutter is something else I've come to like. I'm sure that it would be useful if the camera was used as a remote for wildlife. It certainly goes unnoticed when right next to someone's ear! 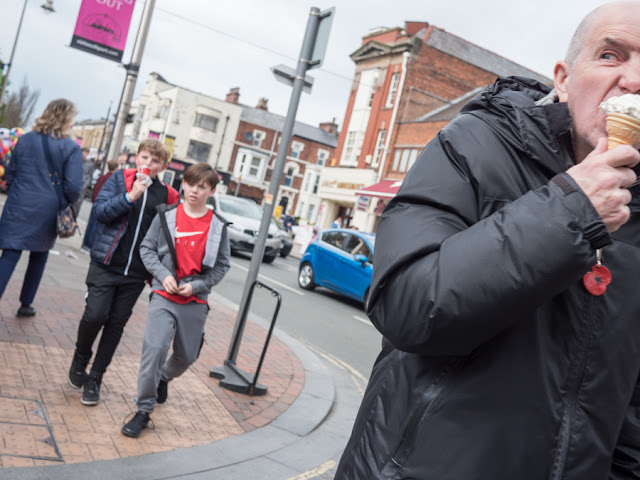 While on my wanderings, which soon became a dog hunt, I took a few traditional 'street' photographs without dogs, some of my usual snaps of 'stuff' and also started thinking about another idea that interests me which I might have found a way in to. Sitting at home thinning about projects never seems to get me practical ways to get them going, whereas wandering around taking photographs does.