Autumn light and other stories

Because the clocks had gone back I set off early last Sunday in the hope of finding some sheep with a backdrop of autumnal colours. The sun was shining, so I was full of confidence. I even found some sheep in field with a footpath running through it and some golden leaves beyond. Sheep being sheep they weren't for posing where or how I'd like then the sun disappeared. When the cloud moved away and the light was gorgeous my camera froze. I got one half decent picture which almost fitted my concept. Ideally it would have been a group of standing sheep. One recumbent sheep had to suffice. 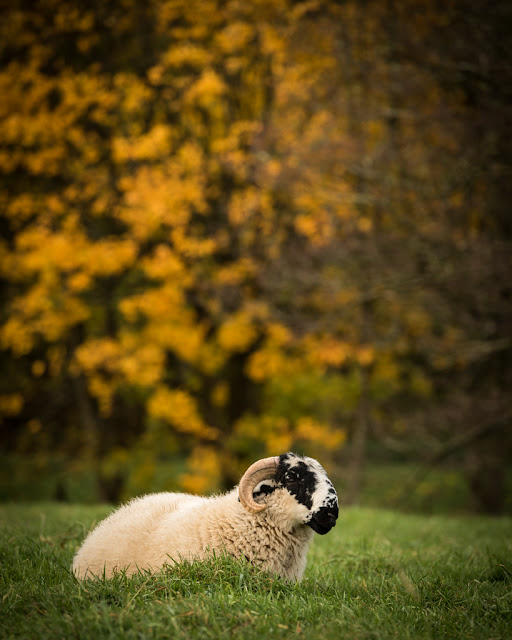 Out of the wind back at the car I sorted the camera out. which was a relief. The sun had swung round by then, however, and was no longer lighting the leaves in the sheep field so I headed off elsewhere.

Autumnal sunshine on golden leaves is very alluring. Against my usual impulses I pulled over and tried to make a trraditional(ish) landscape picture or two. Pleasing in their way, I suppose - after quite a bit of fiddling on the computer. 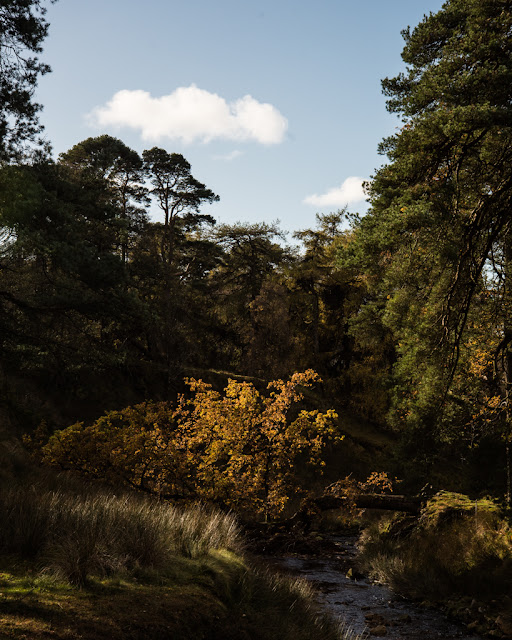 As I was about to get back in my car I saw the light on a tree trunk on the other side of the road. Much more my type of 'landscape' picture. It still took me a few frames before I got the one I was after. 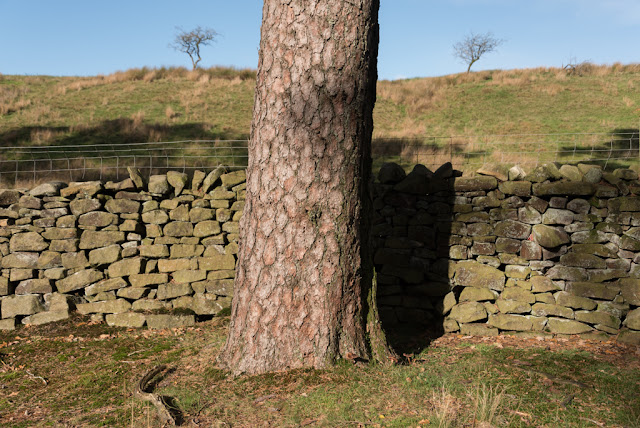 As autumn speeds towards winter the sun stays lower and lower. This means there's no need to get up early to see striking lighting effects. especially when there's a slate grey sky. Something I'm a sucker for.

Why some people are hung up on photographing only beautiful landscapes is beyond me. I get the impression that it's not photography that interests them, not even picture making, but simply looking at 'nice' views which they just happen to take photographs of.  It's the subject that concerns them, not the picture. For me photography is all about making the stuff I see, anything and anywhere, fit the viewfinder frame in a way that makes a picture with some sort of visual structure. That's not to say that there aren't times when merely recording something is enough. There are. But if both can be combined in one picture that produces something else. I don't manage it often, but it's what I strive for.

To me the picture below is as well worth taking as any of a mountain reflected in a glass-like lochan. Certainly it's more complex, in formal terms, as an image than most landscapes. Although I took it thinking about the abstract qualities of shapes and colours it also serves as a document, and maybe (if one chooses) as a comment. It's certainly not just a picture of a fence. 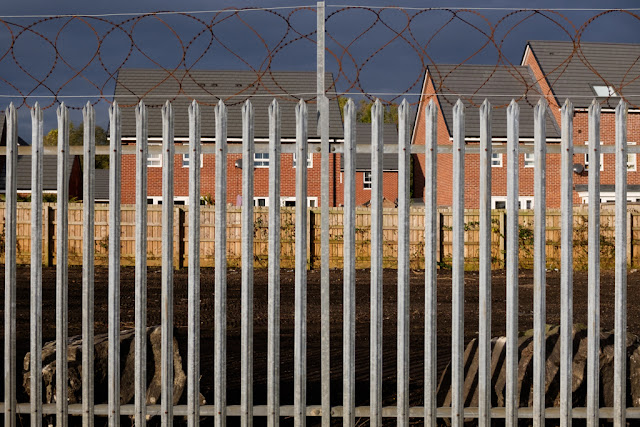 Most of my photographs, I would claim, have a documentary nature of some degree. And when they are primarily intended to be documentary I still try, but usually fail, to give the pictures a form which works in that abstract way. Cartier-Bresson referred to good photographs having a geometry to them. This is something which is more complex than the usual the 'rules' usually applied by amateur photographers. Leading lines, rule of thirds, that sort of basic nonsense. But there are other ways to make pictures work than shapes and colour. It's this way of approaching photography which keeps it interesting for me. Repeating the standard formulae would bore me stiff!

I was late getting to yesterday's poultry show, the judging was already under way when I arrived. This time I tried a slightly bolder approach, getting in closer, which I think was a good move. Hopefully I'll give it another try in a fortnight at another show.


The show was one of the biggest the club has held with over 800 birds exhibited in the purpose built show hall. This time round the championship row pens had been revamped. Larger but fewer pens, with name plates for easy identification of the section winners, and floral displays to brighten the whole thing up. Awkward to photograph - with or without birds in the pens!

As I was feeling uninspired after the judging was done I thought I'd have a dummy run at photographing chicken feet to make a grid. To do it properly would require the birds to be out of the pens and standing on a clean surface. Better lighting would be preferred too. Whether I'll ever get round to taking this idea any further I doubt. Planning isn't my strong point...