After my foray with the slow zoom I was back at the mart with my fast zooms this weekend. It was poultry auction/show day on Saturday and I wanted to try my dreaded 70-200mm out at the show. I'm using this lens more and more these days, although I still don't approve of it! I'd be happier if it was a 50-150mm, but those only seem to be available for  crop sensor cameras on which they have an effective zoom range pretty much the same as a 70-200mm on a non-crop sensor. C'est la vie.

Despite my reservations I found it pretty useful, and even at shutter speeds slower than the usual recommendations for hand holding the vibration reduction did its job and got me sharp pics. Just as well because in artificial light any speed faster than 100th of a second results in widely fluctuating white balance issues. 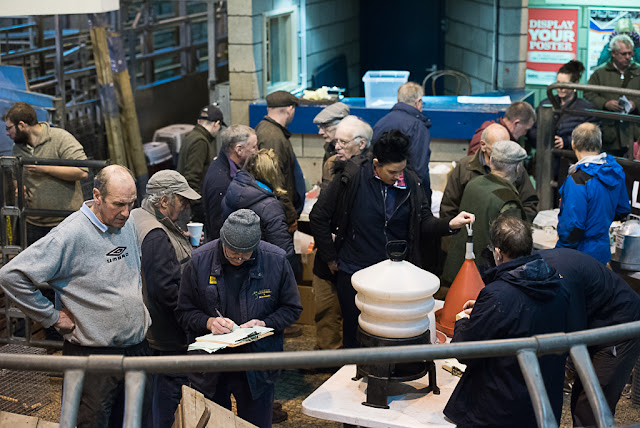 What I most dislike about longer focal lengths is the way they tempt me to shoot candid pictures from a distance. The old 'sniping' approach. It is useful for throwing backgrounds out of focus though.


No matter what lens I'm using I try to be upfront about taking photos of people. Occasionally it pays to be unobtrusive. Early in the afternoon the light started to get interesting in places when the sun was low enough to shine trough the slatted end walls of the shed.


My other lens was my fast standard zoom. 24mm at the wide end is as wide as I like to go except in exceptional circumstances. Using the slightly clunky flippy screen is something I'm doing more and more of, but the way it works it is a spray and pray procedure when it comes to catching fleeting action. Every now and then it pays off though.


Just as I was thinking I had nothing fresh to get pictures of at poultry shows I got two. One of a bird being taken from a pen for judging, and one of a judge filling in his judging book. One taken with the longer lens, one with the shorter.

The auction proved far less productive. The only slight change was altering my viewpoint by sitting on the planks the auctioneers walk along over the sheep pens. The public are not supposed to stand on them so I didn't push my luck. Also I have a terrible sense of balance and would probably have fallen off anyway... Not a major difference to previous efforts, but a little. Again the longer lens was useful. 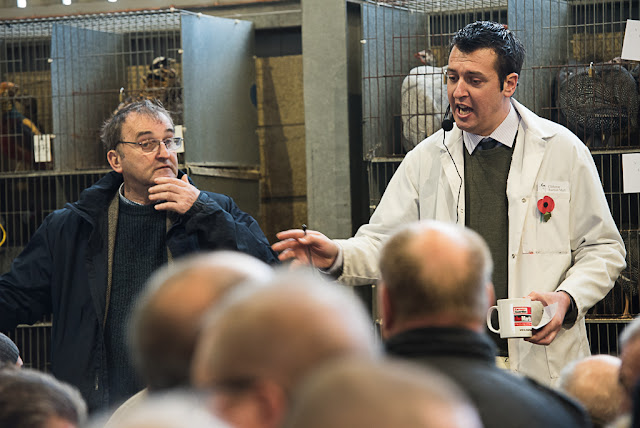 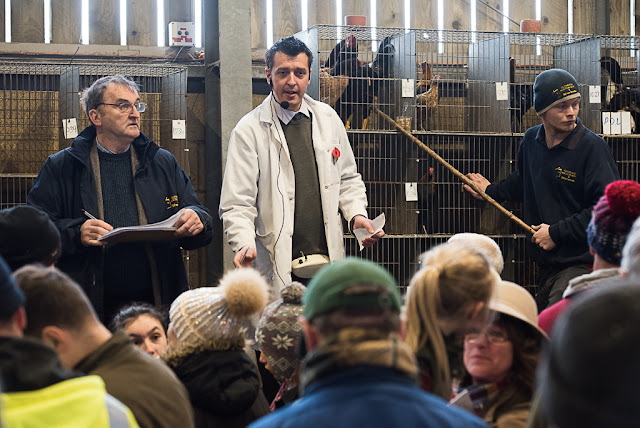 Lacking much in the way of inspiration I tried a few off-the-wall ideas which didn't work. 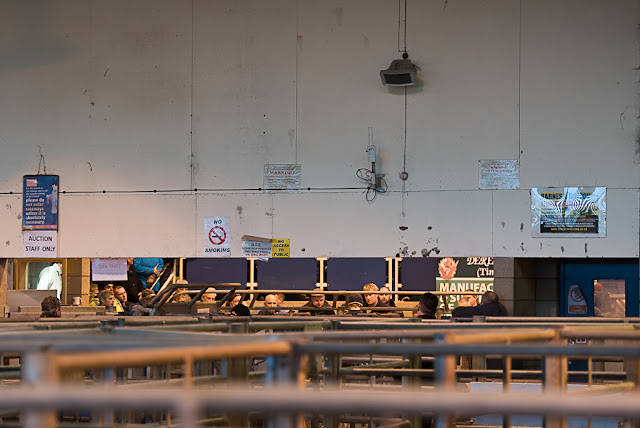 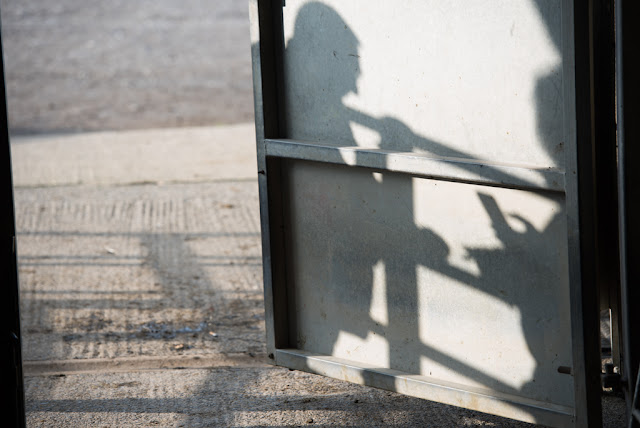 Clichés are hard to resist at times. As is a black and white conversion. 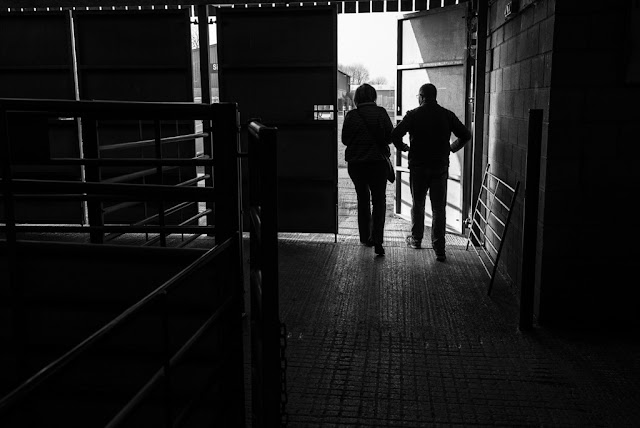 Between this visit to the mart and the one previous I had been out and about looking for sheep in the wild. Well, in fields. I was in search of sheepscapes with a few ideas in mind. I got close with one, but wasn't 100% happy with it. What I'm looking for is variety of landscape away from the flat expanse of the marsh. Something to keep an eye out for when tootling round the countryside, I suppose. 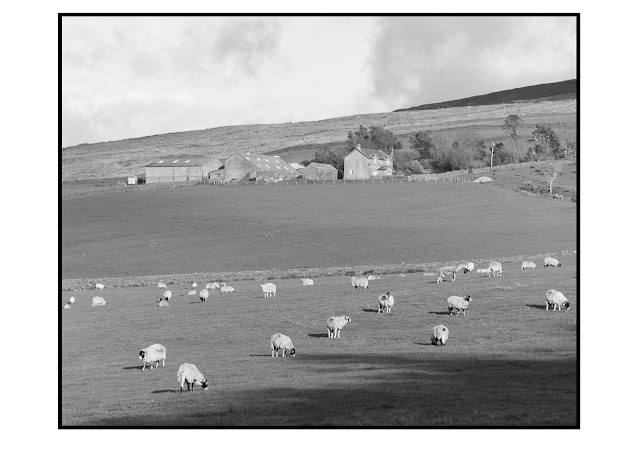 Short winter days don't make it easy to have opportunistic journeys in search of photographs. On Friday I did manage to call in at the sand dunes on my way home from a work related task to see if I could find the Herdwicks spending their winter there. I've photographed them in the past. Not the same sheep, those will have been chops or mince a while back. Conservation grazing is all the rage these days. The way the anti-meat and anti-farming lobbies are working it might be the only way livestock will survive into the next century - that or on heritage farms, preserved to show future generations what life used to be like in the way we have coal mines as tourist attractions.

The light was flat and dull, meaning that when I did find the sheep (gimmer lambs by the look of them) there wasn't much point trying to take any photographs. I did, of course, just in case I forget to go back. And there was one chance which arose that had to be taken. It might not add anything to the big sheep project, but it's not a bad picture. 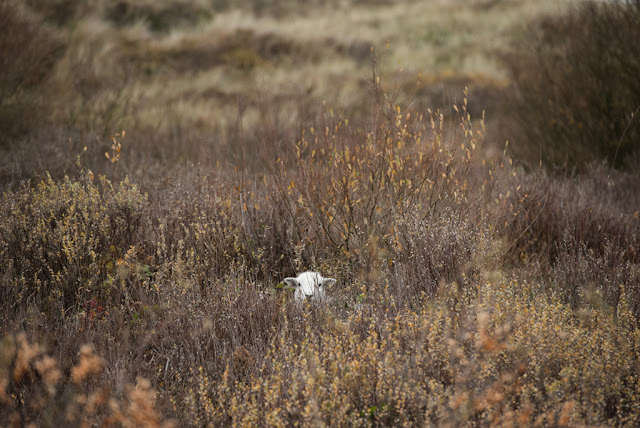 Today the sun shone, but I didn't get out until later than I ought. With nothing in mind I ended up at a nature reserve where there was another flock grazing for conservation purposes. Last time I'd looked in they were in an inaccessible area. This time I was surprised to see them blocking the footpath along the bank. Unsurprisingly they had the lowering sun behind them as I approached causing me problems as it wasn't lowered enough to provide 'interesting' light.

By the time I had walked past the sheep and returned things had improved and the sheeps' fleeces were rim-lit. With some careful exposure and some fiddling on the computer I got one passable picture. In both cases the 70-200mm was in use. I do seem to be getting the hang of it at last. Whether that is a good thing remains to be seen. I really don't want to be relying on it all the time. 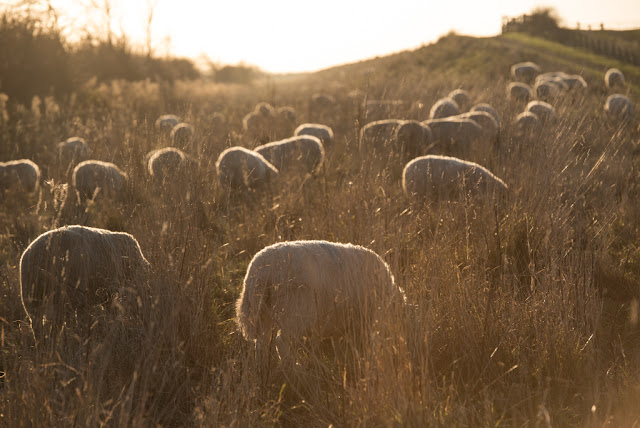