The summer round of sheep and agricultural shows continues when the weather permits. Two more were visited since the last one, both in real summer weather. The hotter it gets, however, the less motivated I become. I cope about as well with heat as a sheep with a heavy fleece! Another jaunt north took me to a small show of sheep with a sheep dog trial.

The trial field was difficult to photograph, or at least the pen and shedding area was owing to a drop in the ground which hid the sheep and dogs when they got within camera range. I could have persevered, I suppose, but there was much going on at the sheep pens to keep me interested. I tried to keep away from the Lonks, but kept getting drawn back to them.

The law of diminishing returns is really kicking in now with over 30 shows photographed, so it was more a case of trying to capture the feel of the venue and event while keeping an eye out for fresh pictures. Whether this one 'works' is still open to debate. 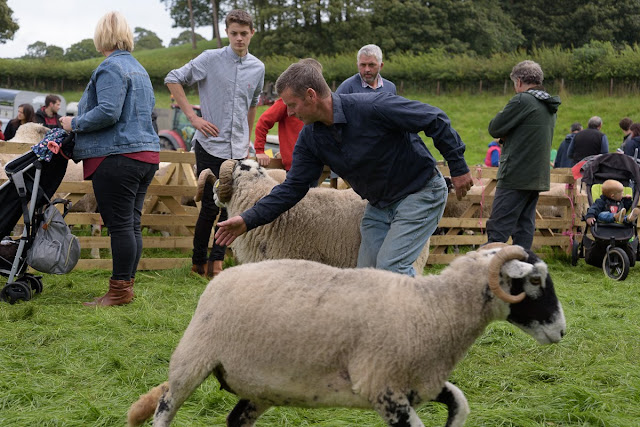 I forced myself to take some photographs of the Herdwicks, which I usually avoid as they are so popular with photographers. 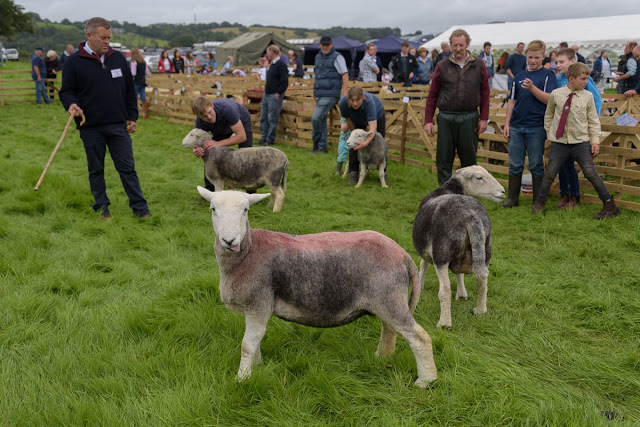 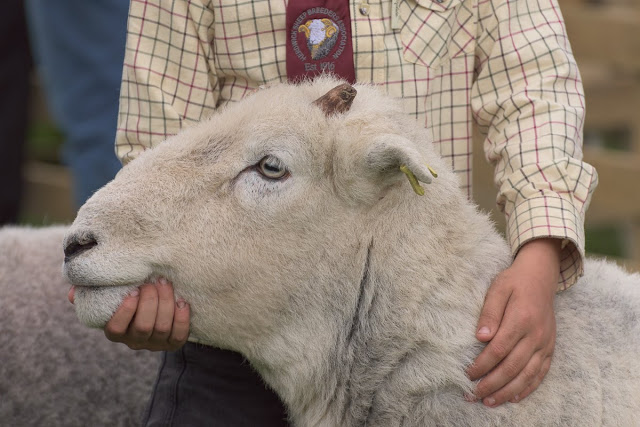 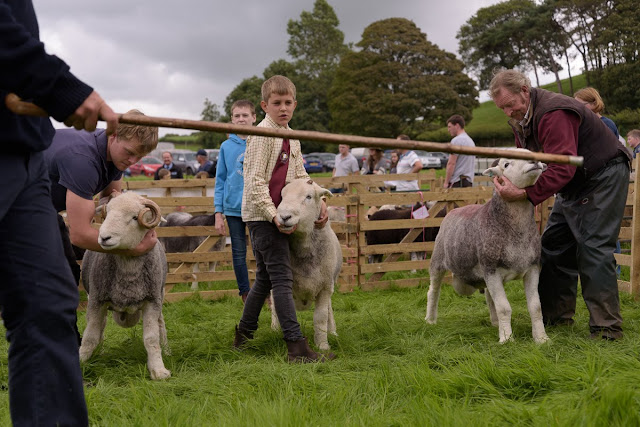 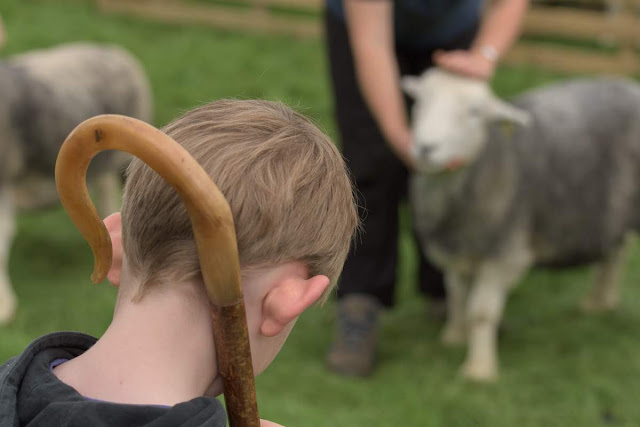 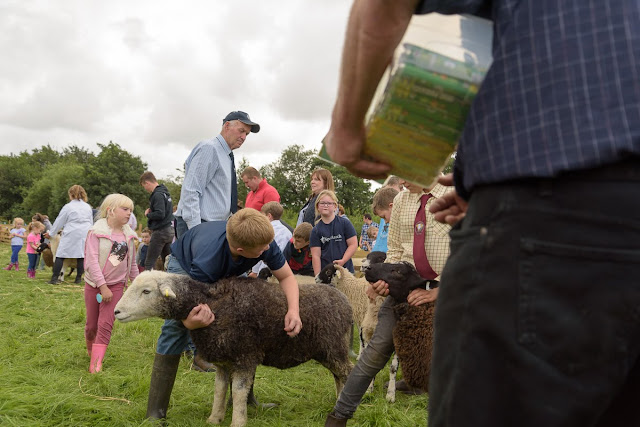 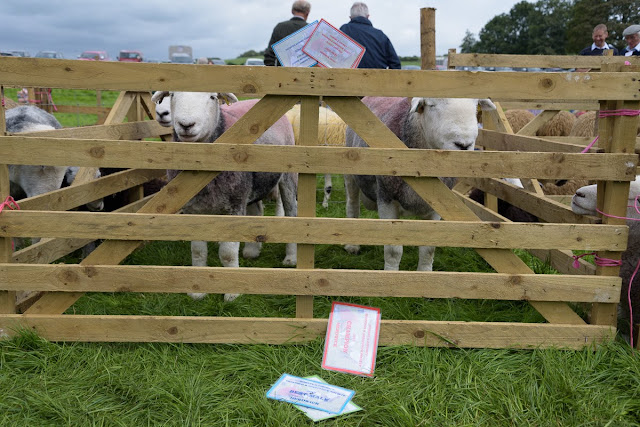 There were the inevitable scene-setters and details. 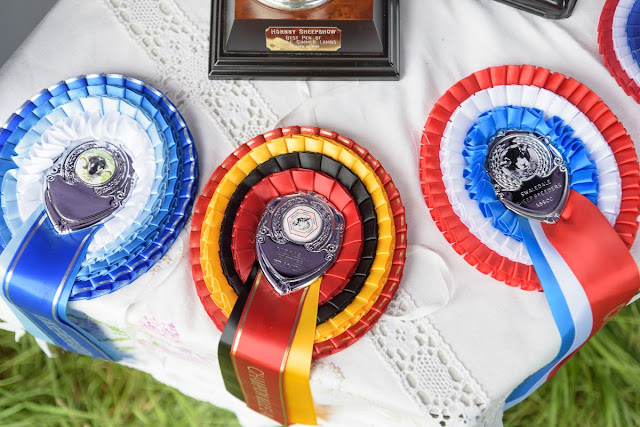 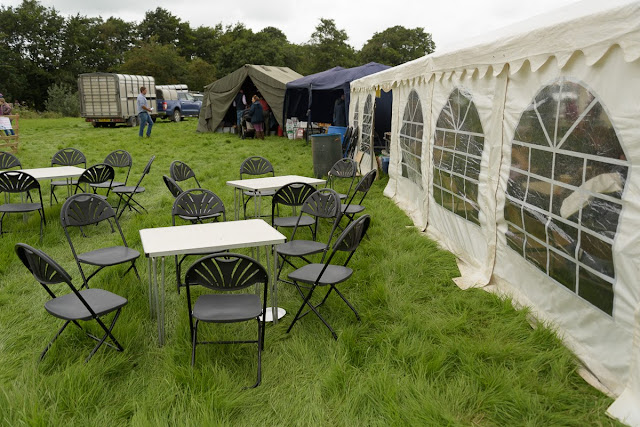 Did I mention there were Lonkheads? 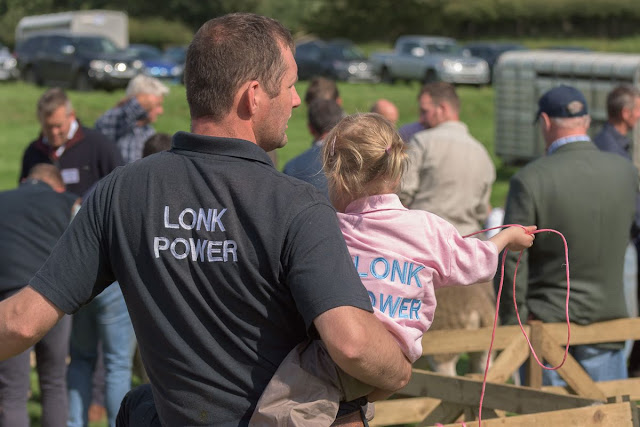 It was such a friendly show that I stopped almost to the very end, leaving after the prize giving but during the auction.

At the Barbon show my main camera had thrown up an error message and frozen on me. I got it working again and it was fine for the rest of the day. However I decided to send it off under a service advisory notice it was under. I knew it was an affected serial number but thought I might as well wait until it started playing up before sending it in. I was quite glad that I still had the crop sensor body which I'd bought to photograph sheep dog action but had decided to part with.

The sheep show was photographed with a combination of crop and full frame bodies. For my next outing I went with the one full frame body and the superzoom. The only drawback to the superzoom is that it can be sluggish to focus. It might only need the contacts cleaning. As far as focal length range goes it does everything I need. 24mm at the wide end instead of 28mm might be useful, but not all that often for me. The 300mm end gets used a lot, especially at close focusing distances - which 70-200mm and 70-300mm lenses can't match.

I was looking at some photos from agricultural shows on-line which had obviously bee taken with wider angle lenses than 28mm. To my eyes they look weird and journalistic. It's the old 16-35mm and 70-200mm cover all bases approach. It gets a photo every time no matter what the situation. Trouble is the pictures aren't always up to much. They can have immediate impact, which is what is required in a news situation. They're not something I would like to look at repeatedly though. If I'm in close I'd rather crop bits of people at the edge of the frame than get them all in with balloon heads!

Come the weekend and with England having thrown the Ashes away I set off to Chipping Show resolved to ignore the cricket. It wasn't long before the sun was baking hot and my imagination frazzled. I just couldn't get into the zone at all.

If I check my files of sheep show pictures I reckon I'll have quite a few side on shots of sheeps' flanks, some with bars or mesh in front of them. Maybe it's time to sort through and make one of my grids? 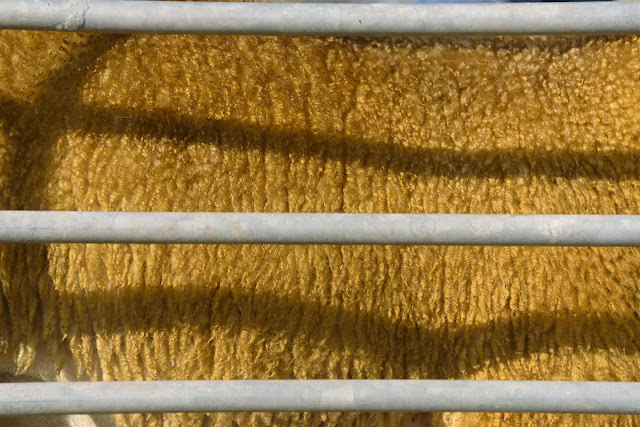 The quest for the ultimate testicle checking picture continues. Closer, but still no cigar. 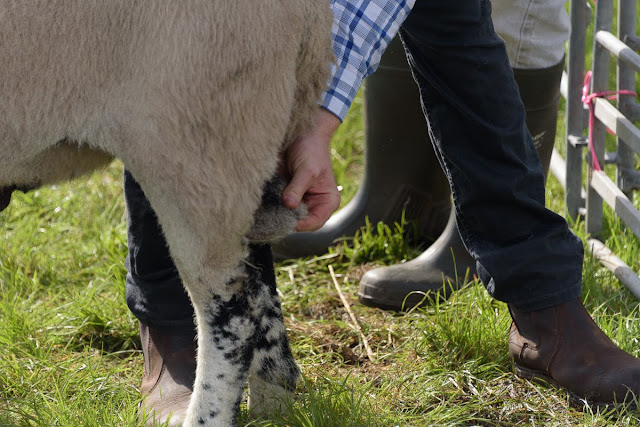 After the breed classes had been judged I took a look at the sheep dog demonstration, which was more informative than the usual duck herding displays as there was an explanation of how a dog is trained in line with it's natural instinct to round up sheep and bring them to its handler. The demonstration ended with an example of practical sheep dog work putting the sheep in the trailer. 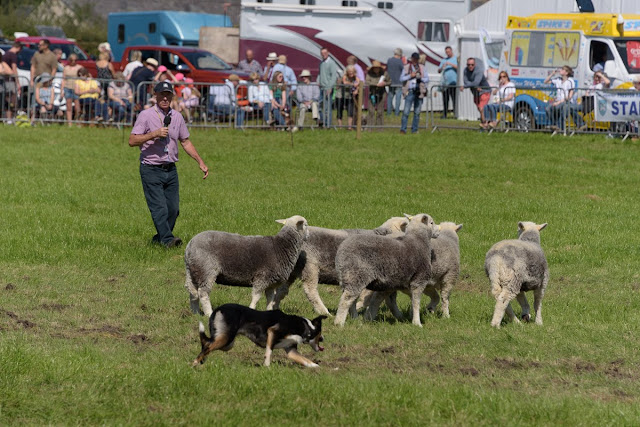 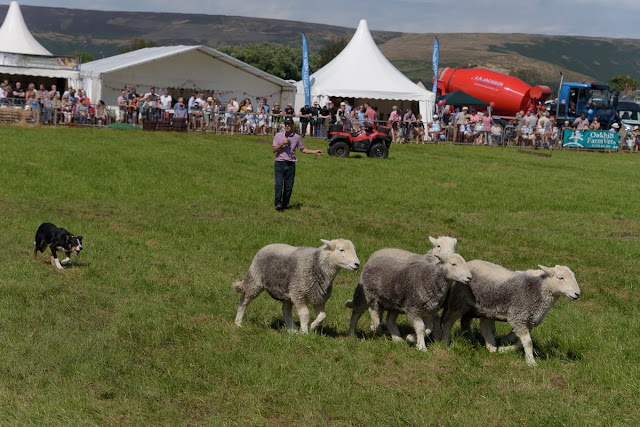 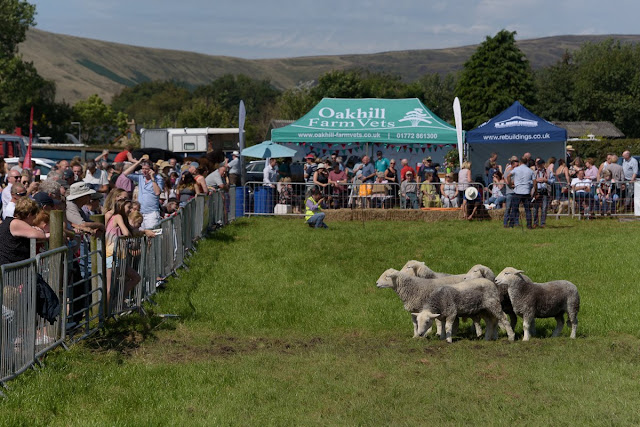 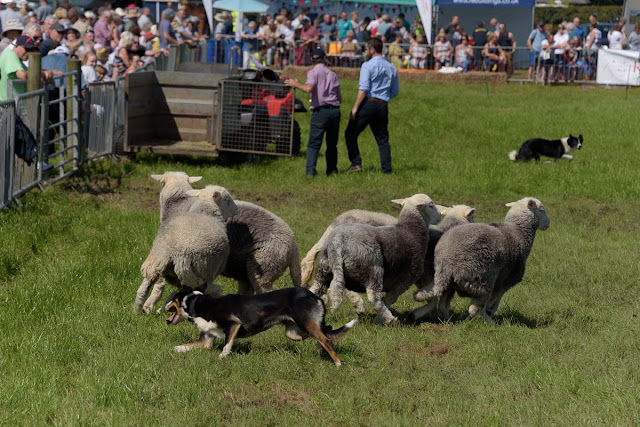 With that over I went for a sit down in my car before returning for the afternoon session of the pairs, supreme champion, junior handlers ad trophy presentation. 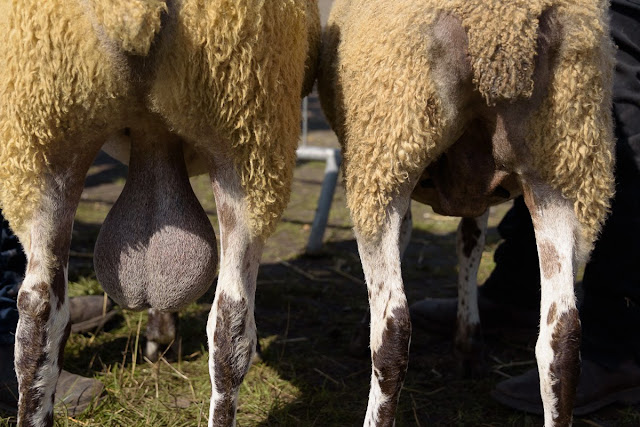 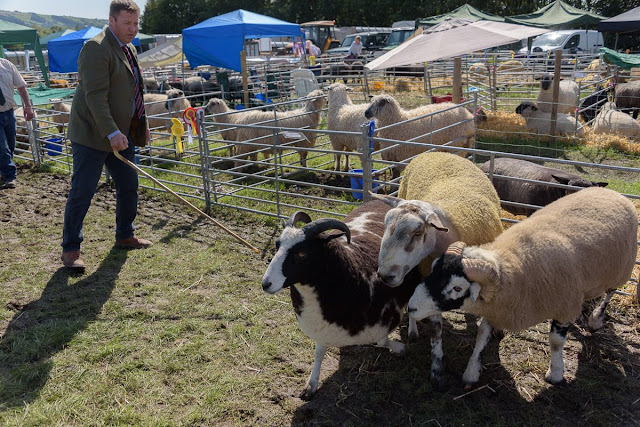 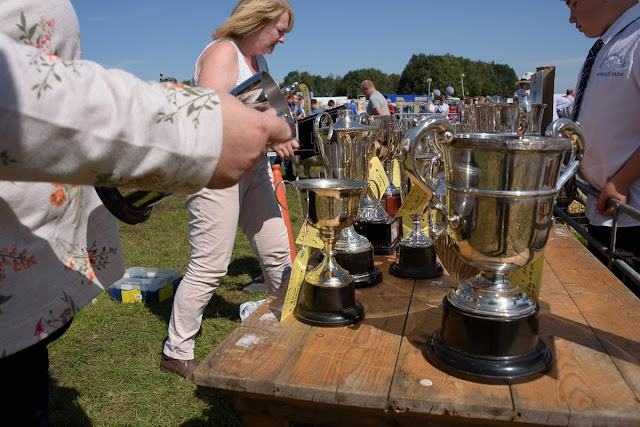 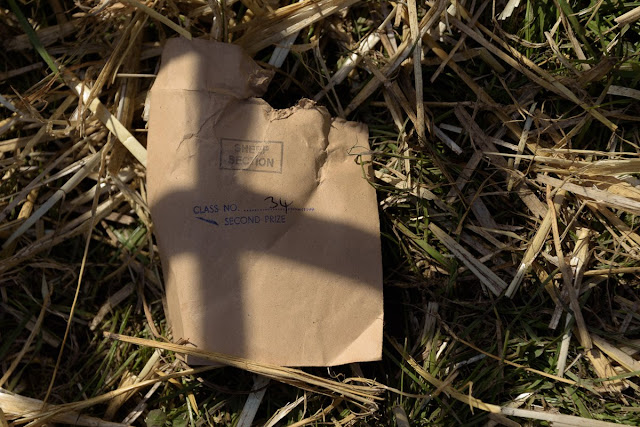 On my way home I took a circuitous route and tried to get a distant view of the showground. A combination of haze and wobbly hand syndrome resulted in a not particularly good photo. 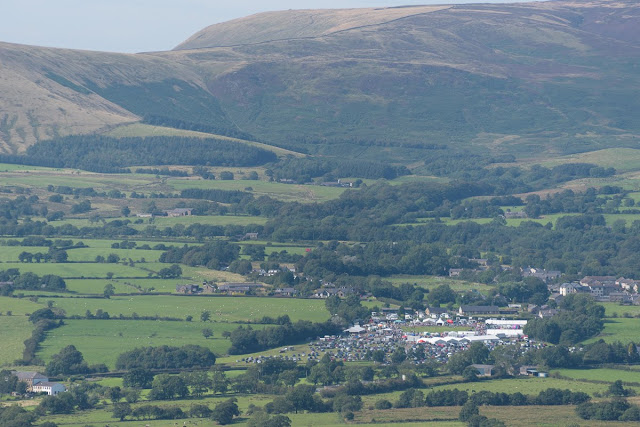 When I got home and checked the score in the test match I knew I had to maintain my ignorance or things would go wrong. At close of play it was clear that I would have to reverse the procedure for Sunday. The sheep dog trial would be missed in order that I could listen to every ball bowled as England set off in pursuit of an impossible dream or they would be all out before lunch. My plan worked!