After missing the first dry and sunny weekend for ages and being without a car until Tuesday my photographic exploits have been restricted to anywhere within walking distance. Which usually means going down by the canal. Usually this proves fruitless but now and then something crops up which makes a picture. 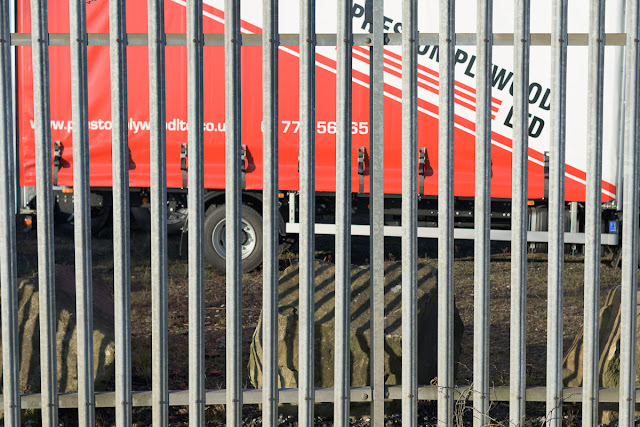 By the time I had no work commitments the week's weather was taking a downturn. Frustration was kicking in. No sooner had I got in the car than it would start raining. Still lacking any fresh ideas it was a short sheep hunt. 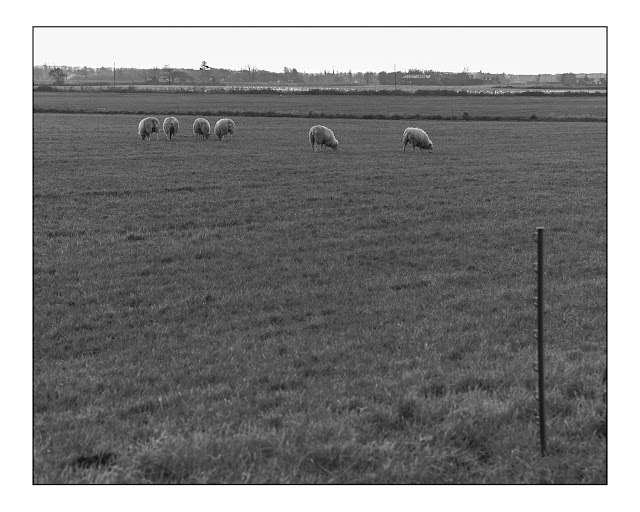 Gradually the forecast was improving. The weekend might be dry. I was perking up. Meanwhile I'd been looking at black and white photographs, in books and my own, and thinking how much easier they are to make than ones in colour. I set the Fuji to black and white and took it for a walk as the light faded and before the chippy opened on Friday evening. The rain had stopped but the road and pavements were still wet. It was almost like stepping back in time to when I only had one camera, one lens and black and white film. 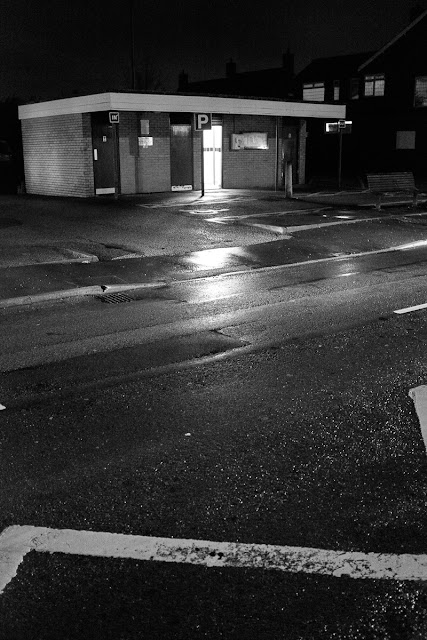 At high ISOs the Fuji files have a filmic look in monochrome. Although this was a very short experiment I almost made a decent grid of nine pictures. It could become a mini-project for the times I'm really stuck. 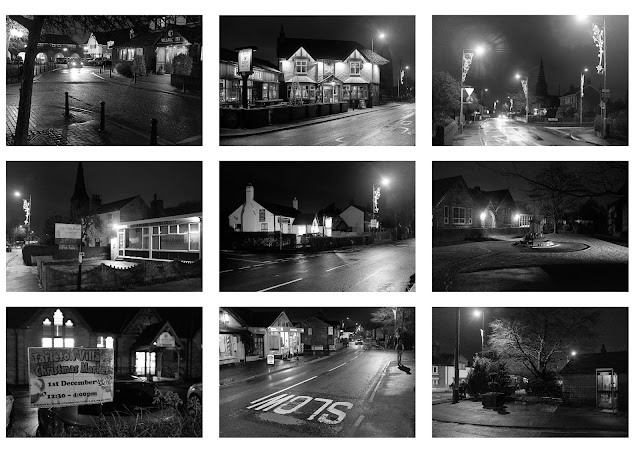 Saturday dawned dry as predicted. After visiting the Post Office and topping up the petrol tank off I went in search of sheepdogs. I hadn't gone far when the windscreen wipers were required. The closer I got to the sheep dogs the heavier the rain got. When the distant hill views disappeared in the low cloud I almost gave up and turned round. But I carried on with a new plan in mind. I drove past the trial field still contemplating Plan B. However as I turned off the main road the rain started to ease up and I spun the car round. It would do no harm to go and have a look at teh trial even if it was only from the road before I set off for home. Out of the car it was not too bad. A thin wind but only a light drizzle. I'd give it an hour by the release pen. 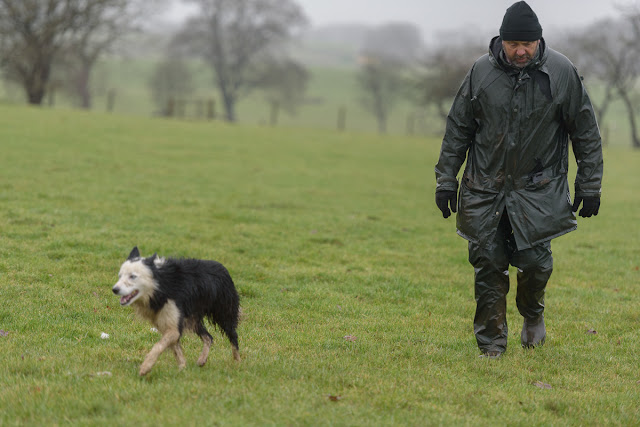 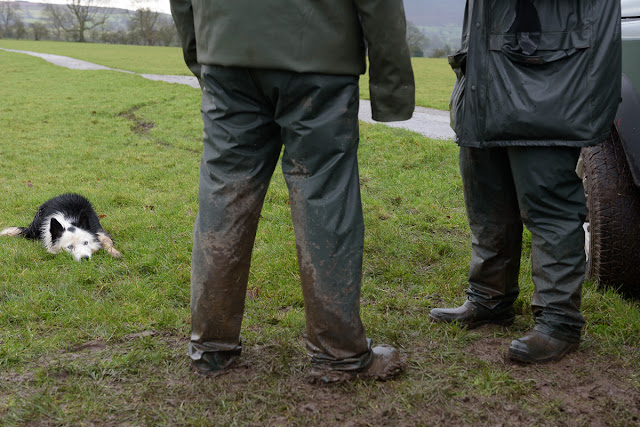 Even though I'm sure most people would think of photographing the dog on sheep action at a trial I find the release pen area more interesting. Even when it's raining the people have to stay out in the weather, whereas down at the judge's end they take shelter in their vehicles. Then there are the sheep and a dog or two, and stuff happens close by. At the other end of the field it's all long lenses to photograph the action. Up with the sheep eevn 24mm can be too long at times.

I also find the rounding up of sheep to refill the release pen more visually appealing. And I like watching dogs do real sheep work rather than performing for a judge. I don't know why. 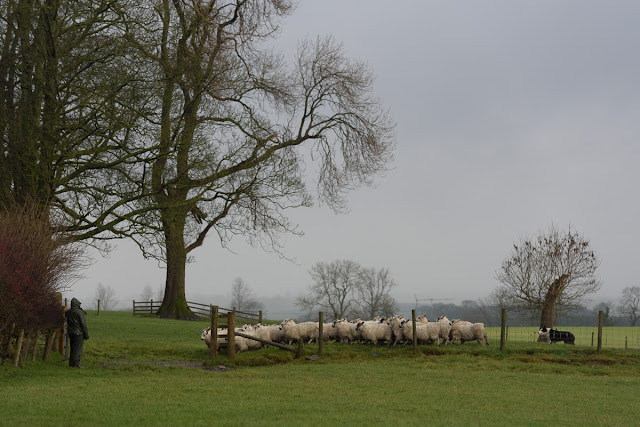 After an hour or so I walked up to the other end of the field where it was a bit tricky to get a good angle on the action. The rain had let up and I managed one or two pictures of people and dogs out of their vehicles. I'm always on the lookout for something off-the-wall too. 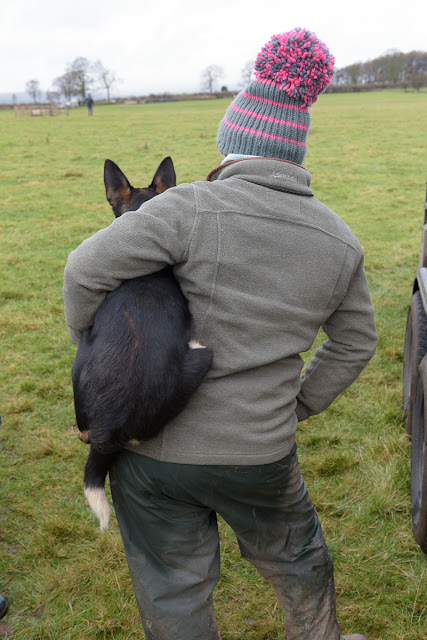 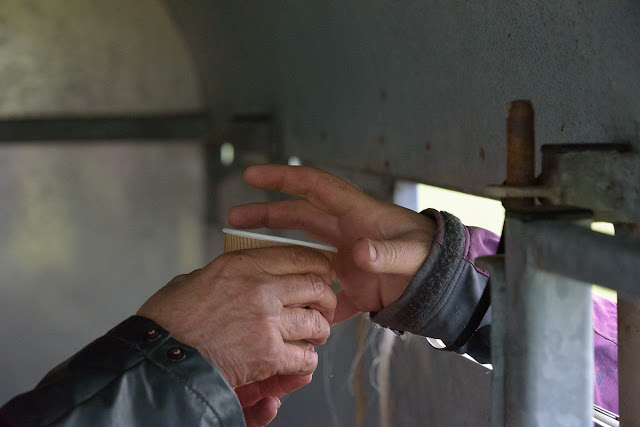 Later on the rain returned and was starting to set in heavier. Time to leave. I took the low route back to the car and in doing so I found the spot I should have been in all along for the penning. It was getting that wet I was constantly having to dry my specs, so I gave it a couple of runs and left. Had the low cloud/mist lifted I'm not sure what the backdrop would have looked like from that viewpoint. More pics here. 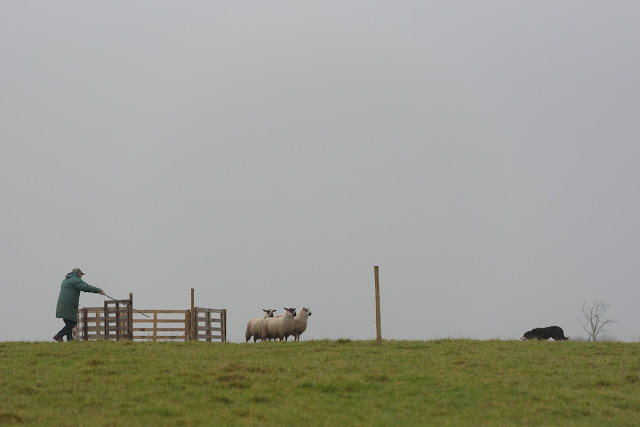 Sunday started a bit miserable then picked up. The downside being the strong, chilling wind. I'd been hoping to get to a weekend-only exhibition of photographs at Astley Hall last week when the car fiasco scuppered my plan. With no work to do until Monday it seemed a good opportunity to get out and maybe take some photos while I was out. As the exhibition was of black and white pictures I stuck the Fuji (still set to mono) in my bag.

The exhibition was worth the visit. Well made prints of well thought out pictures of industrial heritage by Andy Marland (who's exhibition in the bookshop I visited a few years back) presented in a nice space. There are still two weekends left to see the show. 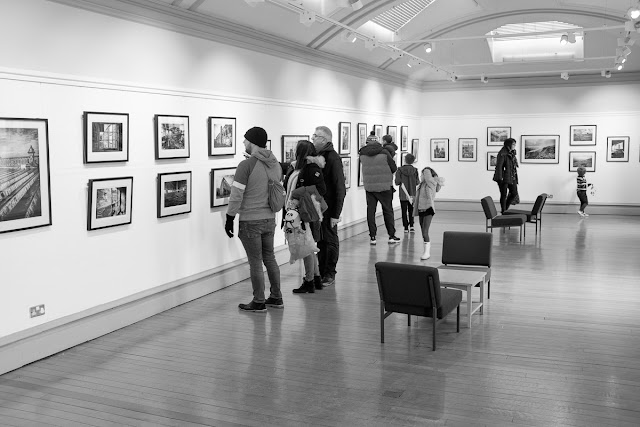 Knowing that the camera was set this way seemed to make me see pictures which would work well in monochrome. Such pictures are quite easy to see as I look for graphic shapes. The little Fuji is going to survive my New Year gear purge, purely because it works well as a fixed lens black and white camera. 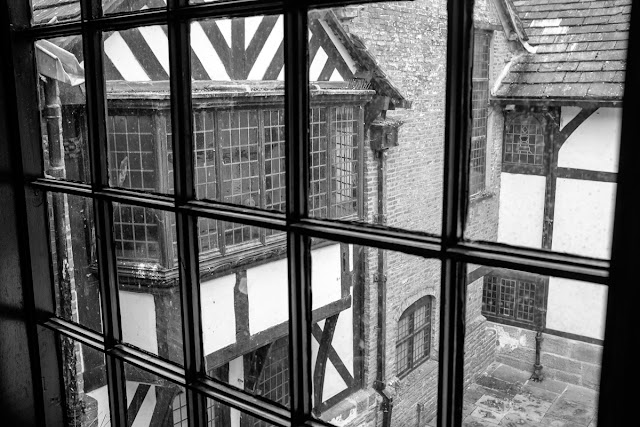 I'm gradually overcoming my resistance to black and white - for some purposes. When it comes to documentary pictures I really do think it has to be colour all the way though. 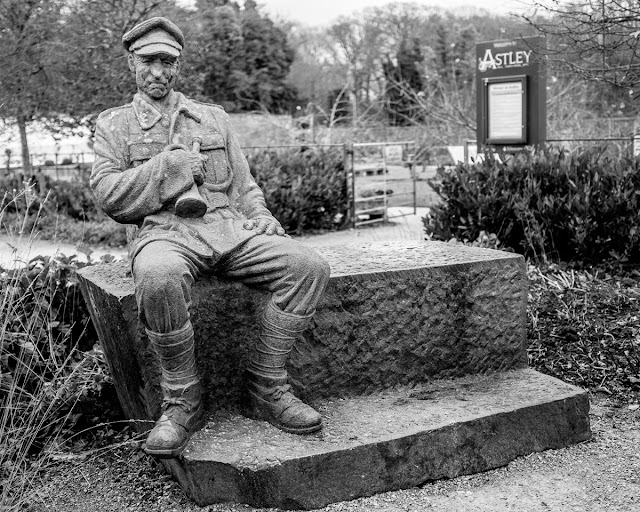 However, some pictures, even when graphic in nature, need to be in colour. 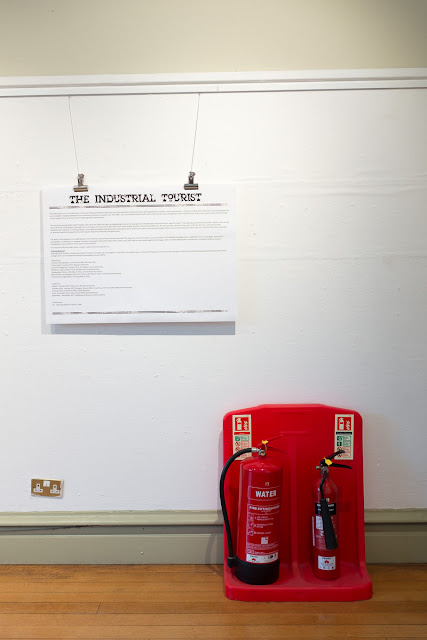 This is not the first picture I have taken of fire extinguishers in an art gallery. Do I feel a project coming on?
Posted by Dave Lumb at 20:32