Change of tack then back to the old routine

It's not like me to be indecisive or change my mind, but... After ditching the original reedy idea I went back to take a different approach. Then I went back again, and again. Gradually a direction was arrived at as I played around with focal lengths, shutter speeds and exposure. I think I have made progress to the stage where I should be able to sort out enough pictures to make a zine which is coherent. Because this is 'art' I am feeling free to crop and process the hell out of the pictures I've taken! This is a taster. 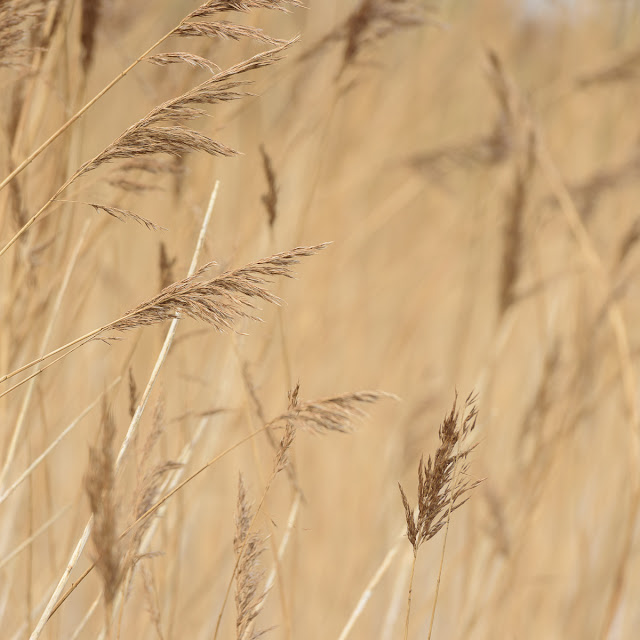 What I did find was that after an hour of playing around, sorry, experimenting with techniques, I started to tighten up. Hence the return visits over successive days. Even after my brain has frozen from pursuing one direction I can open up to other picture making chances. There is a stack of drainage pipes which I have photographed before, but armed with a 20mm lens I tried something different. It's landscape photography, but not as we know it. 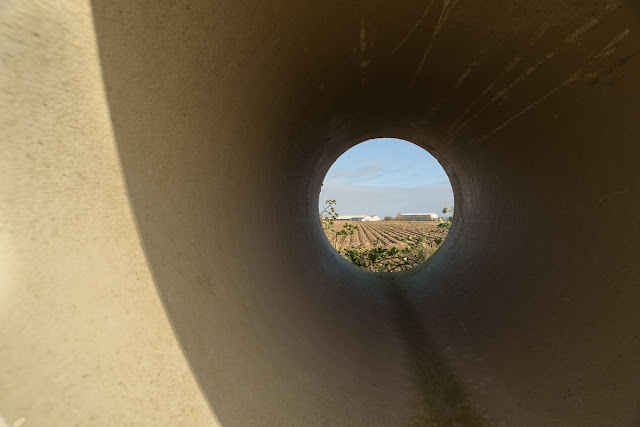 All this messing about was just filling in time until today's poultry show and auction. After my experience at the sheep sale the other week I was determined to do this with the 28/50 combo and nothing else. I started out well enough using the 50mm to get this chicken pimping shot and a few others. 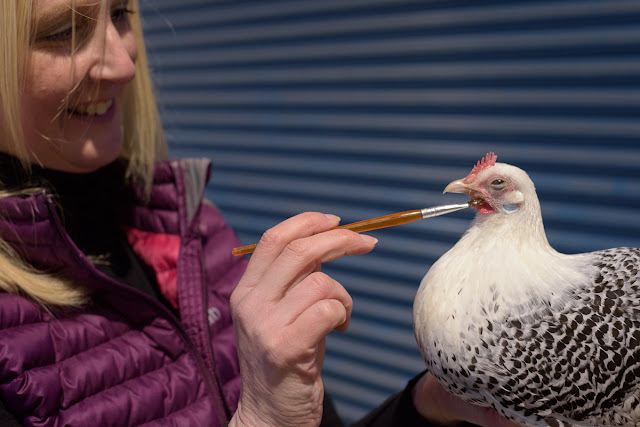 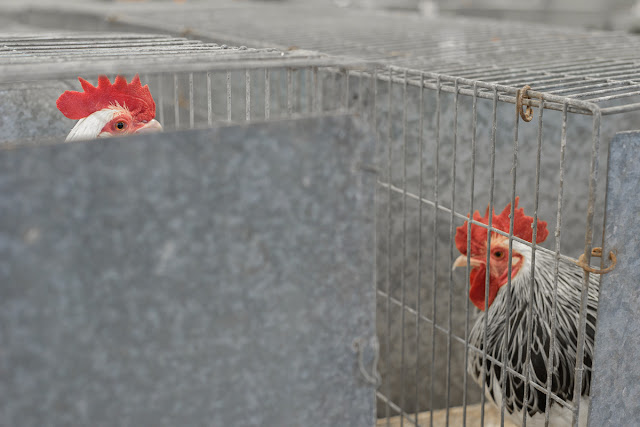 The 28mm wasn't getting much use, I reckon because there was a lot of space to work in. Despite this it was the 50mm I swapped for the dreaded 70-200mm. That lens works well for photographing the judging when there is room. Much as I wish it didn't! 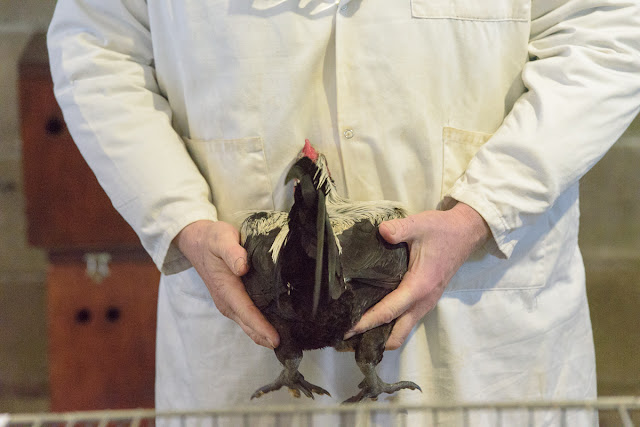 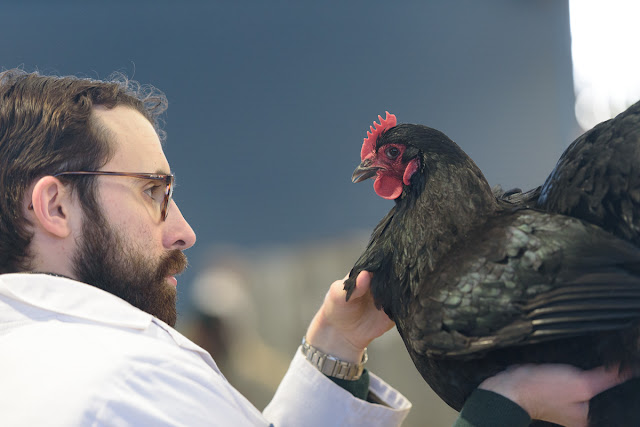 I found it a struggle to get anything much I was happy with. No doubt I could have repeated picture ideas I'd done before, but that seemed pointless. If it was a paying gig to record the events then fair enough, do the greatest hits routine, but when the project is broader than the one day's going on I can't face covering the same ground.

After the judging was over I had a look in at the auction, swapping back to the 50mm. Again there wasn't anything fresh apart from a change of roles for some of the staff. I can't find a way to revitalise my approach. 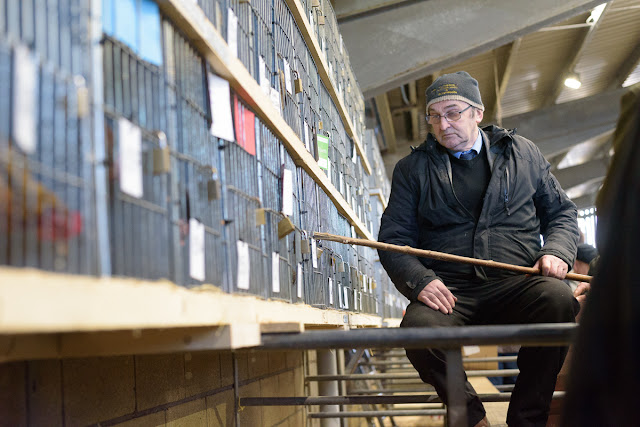 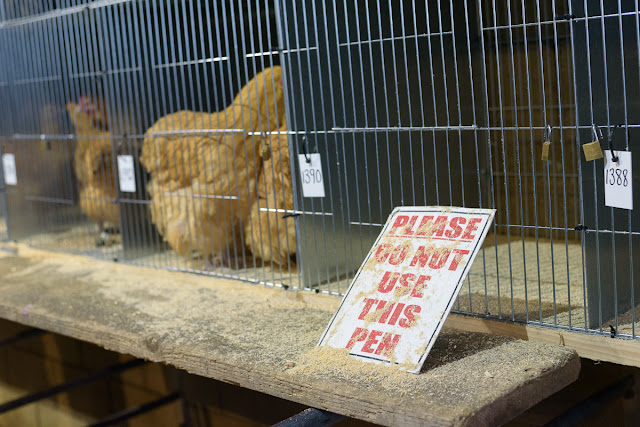 Part of my difficulty, I'm sure, is the gloomy nature of the mart. There's never enough light to get enough depth of field for the kind of pictures I like to take. It's no problem for the fast-lens-wide-open-all-the-time crowd, but for the "f8 and be there" mob which I belong to it's hard to get to f4 most of the time without either losing shutter speed or the ISO hitting five figures. It's not too bad in the sale ring with its new lighting, but in the other sheds it's a nightmare.

I've a choice of poultry or sheep next weekend. I think the chickens will have to do without me. Then again, I've got a bit stale of the sheep front too. How do some people manage taking photographs of landscape all the time? 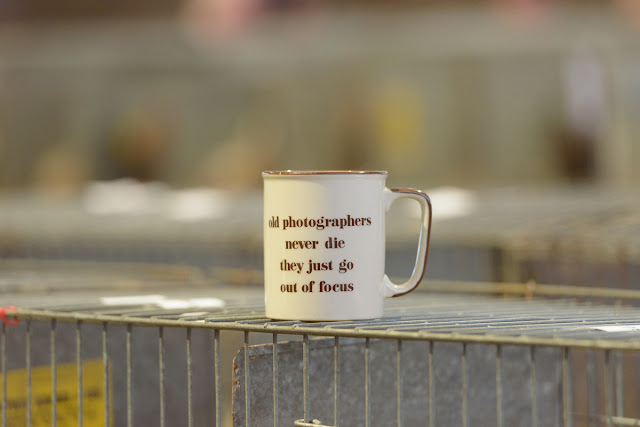