Taking the photos is the fun bit


While I like laying out zines and books the editing of a load of pictures to go in them is hard work for me. It's a task which makes my brain freeze. Taking photographs is far less stressful!

I've decided it's time to round up my poultry show pictures and make a proper book of them. I've settled on the format, the paper and cover quality. I've even designed a cover. But whittling down the thousands of pics to my target of 100 was something I kept putting off. Eventually I dived in and got it down to 500 plus. That was the easy bit. The final (or more likely penultimate) cull is proving really difficult. As much for motivation as for making the choices.

While going through the pics I found some which had no real use beforehand but when put together made a set. The number plates I'd photographed because they were amusing, when cropped and arranged in a grid, had more meaning. Throw in a couple of pics of chicken decals on car windows and a sign pointing to a poultry car park and you might end up with a spread for a book. 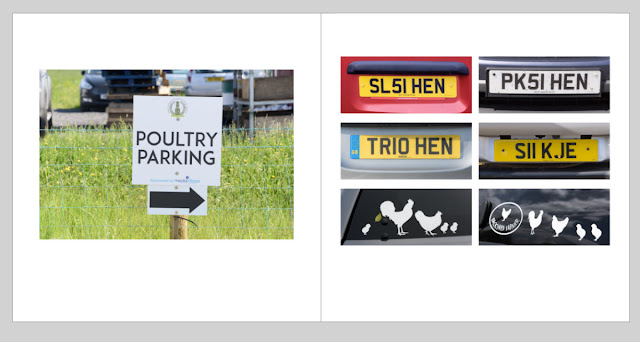 This is one reason I take lots of pictures which are nothing more than record shots of things which interest or amuse me. Given time they can become something when combined with other pictures. A case of the whole being more than the sum of its parts. In a way that's what a project is, on a larger scale. More than a collection of pictures.

My wanderings have been erratic this week. Either short or at odd times. The weather has turned gloomy again too. There was a route I'd almost taken a week or two back but changed my mind about. I wanted to see where a path lead and to walk a different road outside the area I'm concentrating on for this project. It was quicker to drive out and park up to approach it from a different direction to save time.

Although taken outside the designated area two pictures I took are related to what goes on within the area. The first was these trays of what I think are celery plants ready to be taken out to the fields where I have photographed plenty of these red trays. 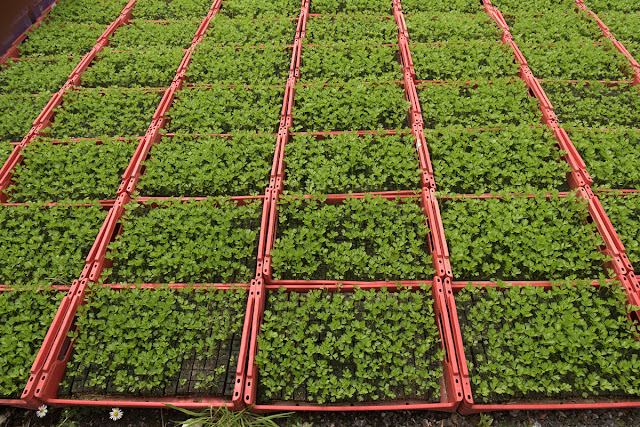 The second was the picture of a polytunnel where strawberries are grown. The source of the strawberry waste piled up on the moss. 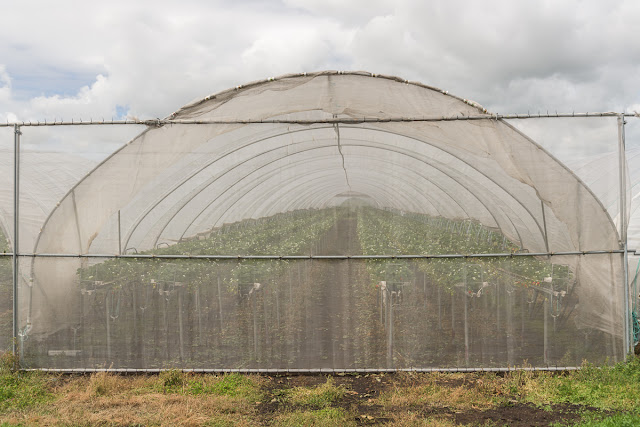 My fascination with greenhouses hasn't abated. It's possible they could become the basis for another project at some future date. 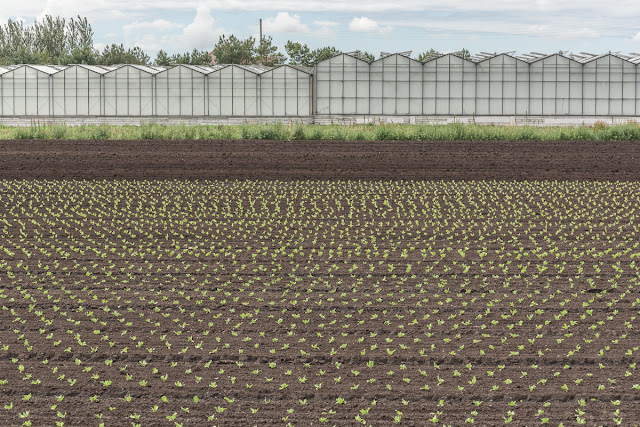 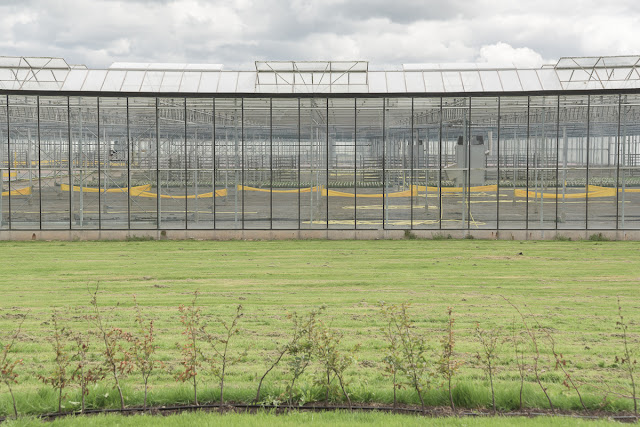 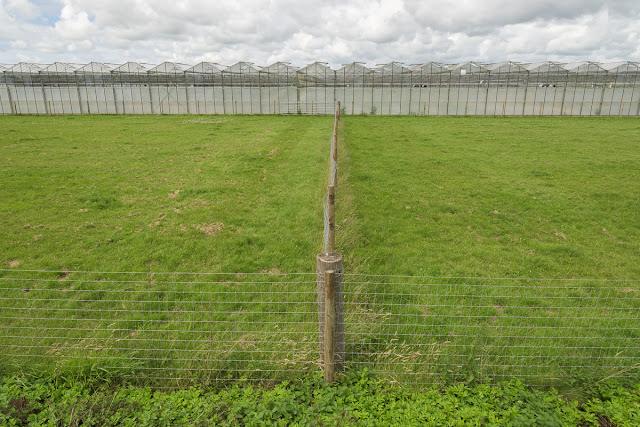 Some things demand to be photographed because they are a bit strange. Framing is everything with this kind of juxtaposition. Not too sure it's any good though. 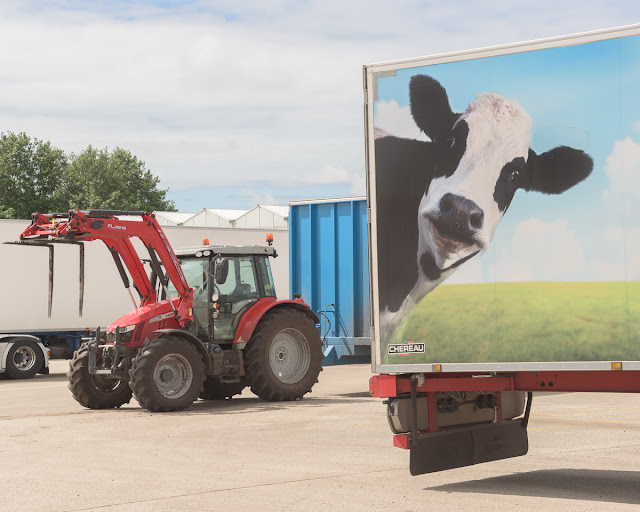 Back on the moss there wasn't much to photograph but the pipe discharging water from one ditch to another adds to my collection of drainage pictures. The action makes what's happening clearer than a picture of a pump which looks the same when switched on or off. 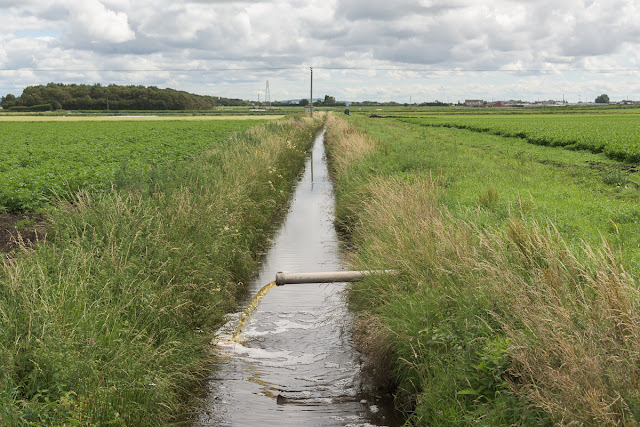 Potatoes are coming into flower at different times in different places. I've yet to get a picture of them with which I'm really satisfied. 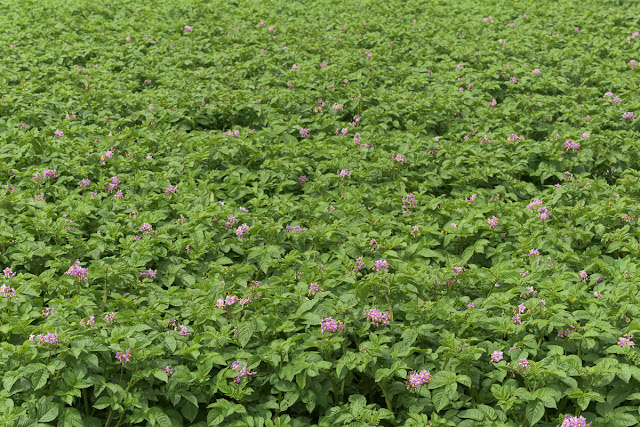 Knowing I'd be stuck in all day waiting for the UPS van I got up early on Tuesday. It didn't get me anywhere in terms of photographs other than potential 'fillers' like this box of free veg outside a farm's bungalow. 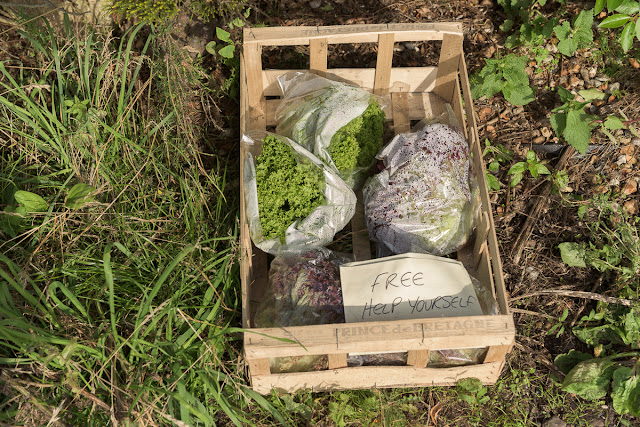 Just because I'm looking for pictures to go in the project doesn't stop me taking others I see when wandering around. This wood pigeon being a case in point. It was the lines and pole against the almost clear blue sky which initially caught my eye. The pigeon added a little something to it. 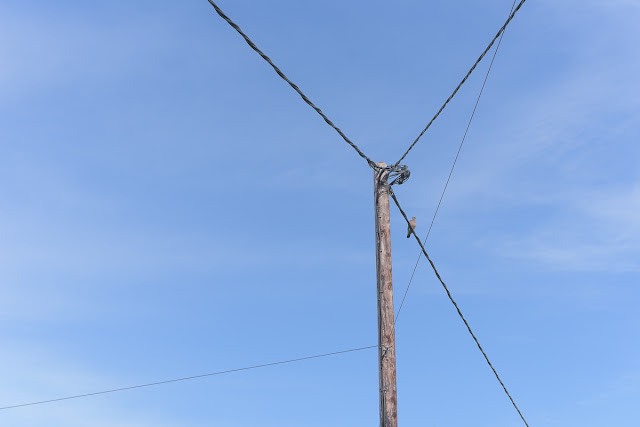 An unplanned walk today while waiting for glue to set was proving less than productive. One not very good building picture and that was looking like my lot. 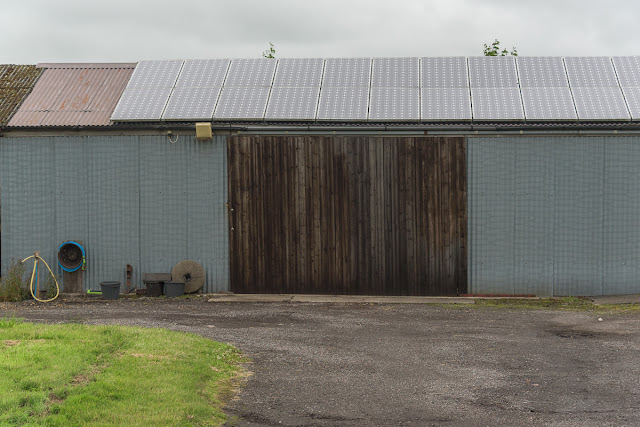 Again the day was dull. Apart from the stick picture it was back to the geometric fieldscapes. I take them in the vain hope that one or two new ones might work in better than what I already have. Sort of reordering the set, pushing rejects to the bottom. 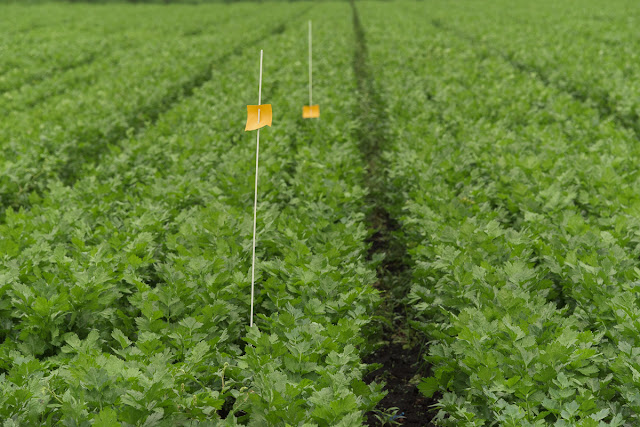 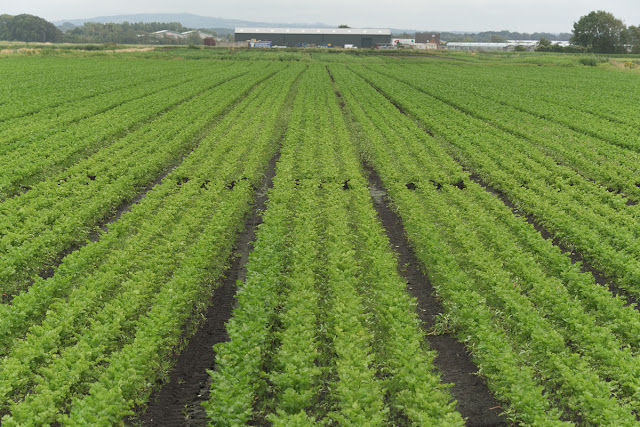 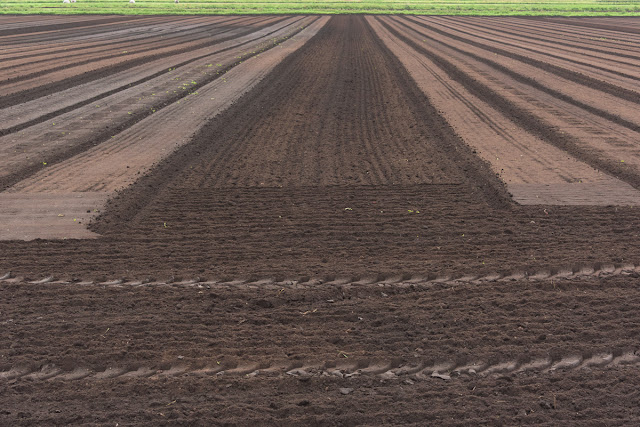 Much of the time when roaming the meanygates I've been using the 28-300 for convenience. It's sharp enough for me. Where it does fall down is with horizontals. Any time there is a horizon line - and with it being so flat and open on the moss that's often - I have to apply lens correction in post. Sometimes to the extent that things on the horizon get cropped. I try to frame such shots a bit wider to compensate for this in advance, but it's easy to forget.

The other lens I've used a lot is the 24-85 because it's light and has vibration reduction. Again it's sharp, but again there's a lot of distortion - more so at the wide end, whereas the longer lens has distortion at both ends of its range.

My 24-70 is less prone to the annoying curved horizons, so I've been taking that out a bit of late. I do like a bit more reach at the long end though. It's a conundrum when trying to travel light. I might have to bite the bullet and take two cameras with me because some subjects are just that bit too far away for a standard zoom range.

The upshot is that I'm considering a compromise. Sacrifice my two slow zooms and replace them with one slightly faster one with a range between them both. Trouble is I can't decide which way to jump!